In UP's Faizabad, an Unlicensed Tyre Factory Has Become a Health Hazard

Fumes from burning defective tyres have not only destroyed crops but also resulted in residents of a nearby hamlet suffering from severe health issues. 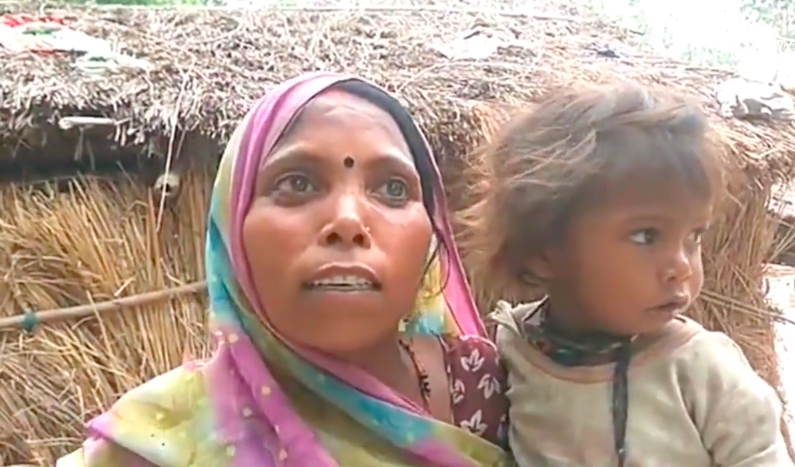 "We all suffer from chronic pain in our stomachs,” says Asha, a resident of the hamlet closest to the factory. Credit: Khabar Lahariya

As Kumkum Yadav, Khabar Lahariya’s Faizabad reporter runs her thumb across a blade of grass in a field in a remote hamlet, it instantly turns black, sooty and grimy. This is due to the fumes that travel from a factory nearby, and which have settled like a blanket over the fields.

According to the Uttar Pradesh Pollution Control Board, chemical plants and factories are barred from discharging untreated sewage into the water bodies or the land around it. Lata Chemical Factory – located in a tiny hamlet called Girjapur Pandey ka Purwa in Bikapur Block of Faizabad – has clearly been violating these norms.

According to the villagers, one of the factory’s functions is manufacturing tyres – and the oil produced from burning the defective pieces is responsible for the thick, black fumes emitted from the premises. The health hazards of these fumes are apparently felt across ten surrounding villages, but the hamlet closest to the plant is the one most adversely impacted.

The factory was established in February 2017, but over the last few months, the effects are starting to become apparent, leading the locals to finally declare that enough is enough. “Khaana hajam nahi hota hai (We’re unable to digest food). We all suffer from chronic pain in our stomachs,” says Asha, a resident of the hamlet. She’s referring to the layer of dust that settles on the food and vegetables she cuts and readies for cooking. Additionally, children are developing boils and sores on their bodies and scalps, she informs us. She’s quick to show us the ‘daane (boils)’ on the head of the child she’s holding in her arms.

Our attempts to source official quotes from the factory owners did not yield any results – the spokesperson, we’re told, has been on leave. Ramashankar Tiwari, the village pradhan, clues us in, “Earlier we were told a steel factory is being planned here. Then, we got to know it’s a tyre factory. The tyres are burnt and the chemicals that are released flow out into the areas around. It’s causing crop damage, and slowly rendering the fields impossible to cultivate. Fasal ugaai nahi ja rahi (We’re unable to plant crops). Eight to ten quintals of wheat were being produced here quite easily. In today’s date, it’s barely two. Can you imagine the loss we’re facing?” He pauses and adds, “We need this factory to shut down immediately.”

Due to lack of initiative and action from officials, locals set off on an investigation on their own. What Rishabh, a Girjapur Pandey ka Purwa resident, calls “karavahi”. He, along with other young men from the hamlet, then followed it up with protests. Ankit, his mate, who’s been facing “severe lung problems” as a result of the fumes, and has been a part of the “dharna-pradarshan” organising committee, also shares with us stories of intimidation. They’ve all faced it from unnamed locals he has reason to believe are company representatives, “Maar denge, yeh kar denge, woh kar denge, they say stuff like that to us”, he says.

The first official protest was on June 10, and since then, the last month has seen some action. After the June protest, the SDM Vijayendra Kumar promised to have the factory shut down citing a lack of license.

Our investigation, however, revealed that it had been revoked over a year ago due to lack of adherence to guidelines. But the SDM refused to grant us an official interview to follow this up.

Meanwhile, the people of Girjapur Pandey ka Purwa plan stronger protests, hunger strikes and are determined to face any threats.