'In Thoothukudi, the Choice Before People Was to Die of Cancer or Bullets'

Exclusive interview with Krishanmoorthi Kittu, one among the 40 leaders who organised thousands and led the anti-Sterlite protests in Thoothukudi, Tamil Nadu, who is 'underground' now. 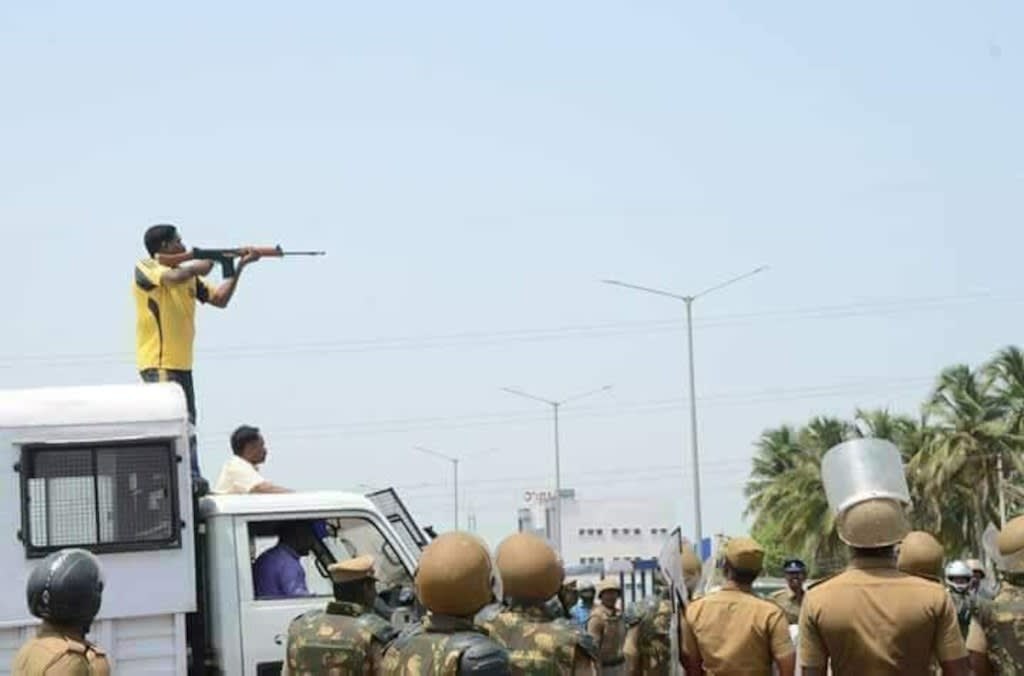 The mystery of the police firing deepened with the emergence of a picture showing a sniper shooting from atop a vehicle at the crowd. Credit: Twitter

Forty-seven-year-old Krishanmoorthi Kittu, one among the 40 leaders who organised thousands and led the anti-Sterlite protest in Thoothukudi, Tamil Nadu, is still ‘on the run’.

After the May 22 police firing, which claimed 13 lives, he has not visited his home and met his parents, wife and two daughters.

“We are not afraid of the arrest. We are ready to surrender. But we want to know from the government whether holding a protest is a crime? We want to know what kind of charges they have framed on us. Till then, we will evade arrest. Still, a lot needs to be done,” Kittu, who has also changed his telephone number to avoid phone-tapping and tracking, told The Wire in an exclusive interview. 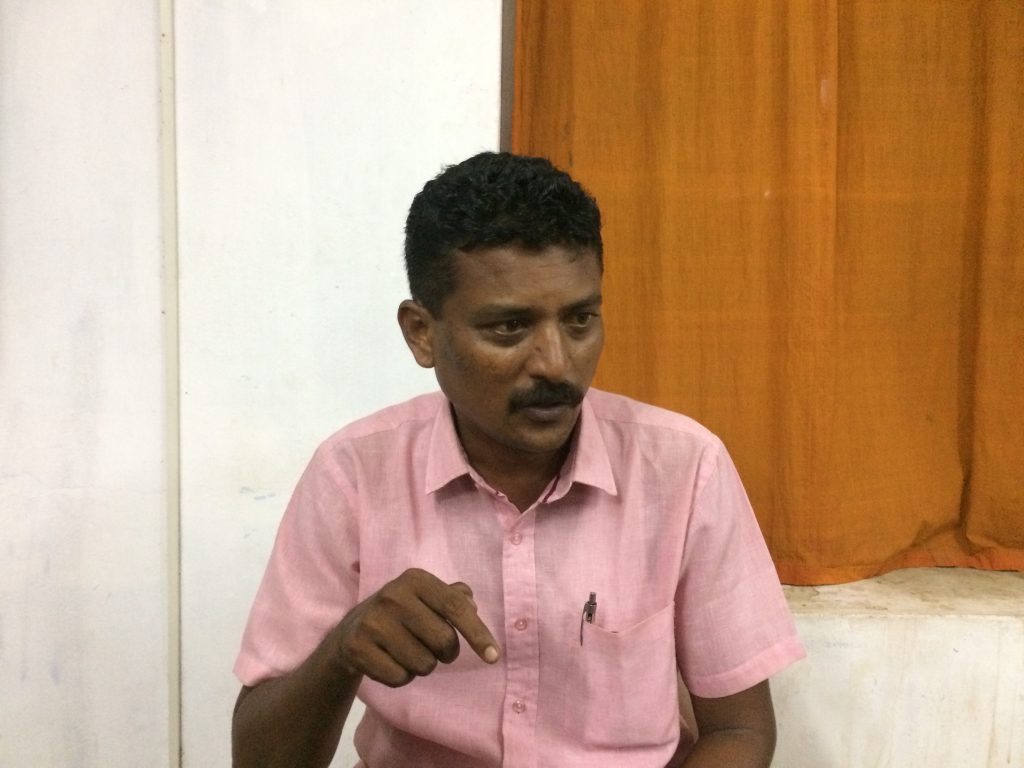 After the May 22 police firing, which claimed 13 lives, Krishanmoorthi Kittu has not visited his home and met his parents, wife and two daughters. Credit: Special arrangement

Like Kittu, the rest of the leaders have also gone underground till their lawyers find out the charges slapped by the police on them and are ready to fight the cases.

Talking in detail about the protest, Kittu said that the people of Thoothukudi, who came together to protect their land, water and lives, had only two choices before them.

“Both choices meant death for us, either by cancer or by bullets. Pushed to the wall, we chose the bullets,” Kittu said.

Since the mid-1990s, Kittu, his colleagues, elders, women and children in ten villages in the district where the Sterlite Copper plant is situated, were holding peaceful protests, like submitting pleas to the officials for stopping of the smelter plant, filing cases and holding sit-in protests.

The smelter – Sterlite Copper (formerly Sterlite Industries India Ltd.) – is located within the State Industrial Promotion Corporation of Tamil Nadu (SIPCOT) complex in Melavittan, Thoothukudi, where it has been operating since 1997.

Sterlite Copper is the Indian copper-producing unit of Vedanta Ltd., a subsidiary of Vedanta Resources, the UK-based mining and metals conglomerate, founded by Anil Agarwal, an Indian citizen living in London and its current chairman. Agarwal is worth an estimated $3.3 billion.

It was planned to set up the unit in Maharashtra and then Madhya Pradesh. But finally, it was set up in Tamil Nadu.

According to Kittu, when the protestors stopped downloading equipment at Thoothukudi Port, it was brought to Cochin and then our place.

“We all know that copper production, including mining, smelting and refining, is a hazardous industry that produces toxic by-products like lead, arsenic and sulphur oxides that adversely impact water, soil and air quality,” he said.

“There is a unique cancer spreading in Thoothukudi, the cancer capital of Tamil Nadu, by its own official records. We will come to know about the disease only 30 days earlier. And in 30 days, we will die. Every family in Thoothukudi, especially a village named Pattaramapetti, has at least one or two cancer victims,” Kittu said, adding that there is even a Kerala Transport bus that shuttles between Thoothukudi and Thiruvananthapuram, which we call the ‘Cancer Bus’, as most of the passengers are cancer patients going to Kerala for treatment.

“Even pregnant women are hit by cancer. They were killing us after birth and before birth too. So, we chose to fight and die,” Kittu added.

In 2006, researchers from Tirunelveli Medical College conducted an epidemiological study in an area within a five-km radius of Sterlite Industries.

According to their report, they found a high prevalence of asthma, pharyngitis, sinusitis and other respiratory tract infections, all proxies for the presence of harmful gases and particulate irritants in the lower atmosphere. They also found an inexplicably high incidence of menstrual disorders, like menorrhagia and dysmenorrhea, in women living in the area.

According to Vedanta itself, the Sterlite plant in Tuticorin has one of the lowest costs of production of all copper smelting operations around the world.

However, the environmental impact caused by smelters is indisputable and the effects extend to several tens of kilometres around the source. Environmental regulations that aim to reduce emissions require operational changes and make production more expensive and less competitive. 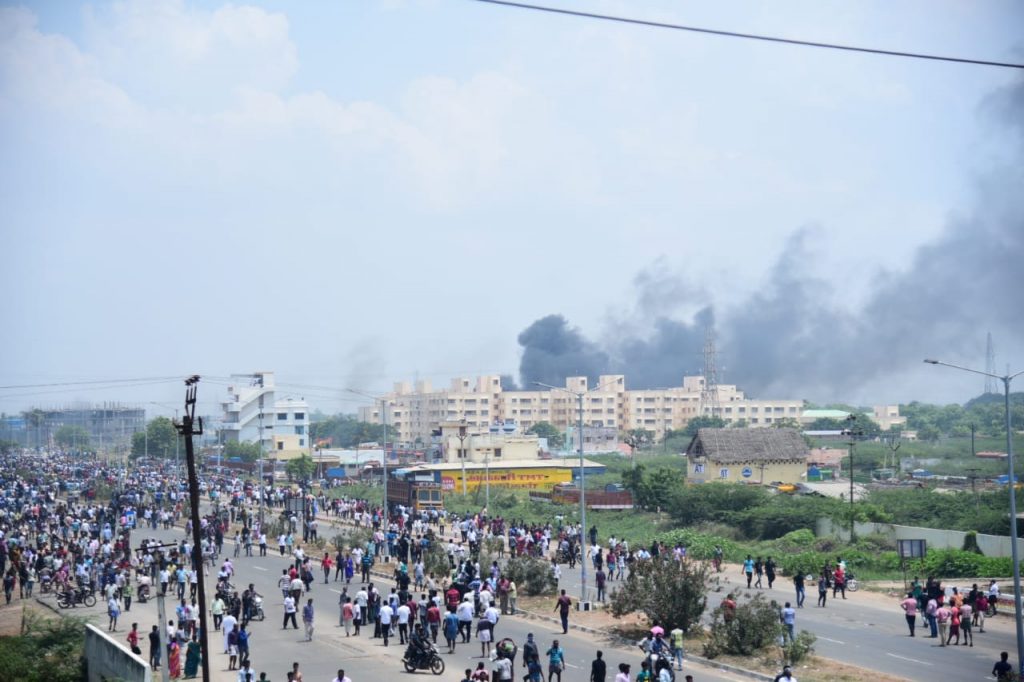 Smoke billows over Thoothukudi after protests demanding the closure of Vedanta’s Sterlite Copper unit entered the 100th day on May 22, 2018. Credit: Surya, Tuticorin

And interestingly, the Sterlite Copper complex is located within 25 km of four of the 21 islands in the Gulf of Mannar, a diverse and sensitive marine ecosystem.

“Isn’t this a blatant violation of the coastal Acts. But the government, political parties and even the media were with them. So, any rule can be bent,” Kittu alleged.

The Tamil Nadu government had also reduced the width of the mandatory green belt around Sterlite from 250 metres to 25 at Vedanta’s request.

A 2005 report by National Environmental Engineering Research Institute (submitted to the Supreme Court) found high concentration of copper, lead, cadmium, arsenic, chlorides and fluorides in a sample of groundwater taken from the plant’s neighbourhood.

“Even in my blood there is arsenic. I don’t know when I will die. What can be done. The only option is fight and die,” Kittu added.

The most recent protests were triggered by Vedanta’s move to build another copper smelter in Therkuveerapandiyapuram village to double the company’s total production in Thoothukudi from 400,000 tonnes to 800,000 tonnes a year and making it the second biggest in the world.

The protests are spearheaded by the residents of Kumarettiyapuram village, which is within 200 metres of the proposed plant, which later spread to other villages.

What happened on May 22

“On May 22, we planned a rally to the collectorate and a peaceful sit-in there. Our slogan was, we will hold a sit-in protest at the collectorate till the plant is closed. We started our journey. Till ten kms, from our starting point near a church to the collectorate, everything was fine. After that, we didn’t realise that we were walking into a trap set by the plant hitmen and the government,” Kittu said.

He said when the government claims that we “ran amok”, they should find out “whether anything was destroyed in the ten km we crossed. Nothing. There were at least 150,000 people marching peacefully,” he adds.

“The police deliberately pushed back our women by touching their breasts so that we get provoked. Then they fired tear gas. Then they themselves threw stones, set fire on vehicles and created chaos in the area. We all got scattered. Our women and children were beaten,” Kittu added.

According to Kittu, three snipers were hiding on three vantage points.

“When we reached the collectorate, it was the police that were ‘calling us inside’. The moment some 100 of us walked in, the firing started. Those who entered were rounded up and beaten. The only weapons we had were water bottles and biscuit packets…” Kittu said, alleging that it was a “pre-planned massacre.”

He claimed that 18-year-old J. Snowlin fell on his left side after she was shot at the back of her neck and the bullet could have come out through her mouth. “Snowlin was a very bold girl and would bring her friends to the agitations. The last words I heard from her was ‘Down, down Sterlite…” he added.

Kittu said that there were insiders among them who were pointing a finger on comrades who should be shot at.
“They were shooting from the top of a van and from two buildings. They were not even wearing uniforms and they gave no warning,” Kittu said, adding that out the 13 dead, eight were the leaders, “which itself proved that the firing was pre-planned.”

Kittu said what they have learnt is that the police first information report (FIR) has claimed that it was a deputy tehsildar in Thoothukudi (who ordered the firing).

“It is alleged that when we ‘rioted’ he ordered for a firing. We don’t believe that. We don’t know who ordered the firing,” Kittu said, adding that reportedly the deputy tehsildar had come out openly saying that he had not given any firing order.

“Interestingly, we also came to know that on May 22, the tehsildar was not in town. He had travelled to some other place for official duty,” he added. Police personnel baton-charge protestors who were demanding the closure of Vedanta’s Sterlite Copper unit, in Tuticorin on May 22. Credit: PTI

Confirming Kittu’s claim, there are news reports that while the FIRs revealed that deputy tehsildar-rank officers had given orders to police to open fire on anti-Sterlite protesters on May 22 and May 23, the deployment order issued by the sub-collector has revealed the officials were deployed in spots away from the police stations at which the FIRs were filed.

The report adds that the Madurai Bench of Madras high court directed its registry to implead the three deputy tehsildars who ordered the police to fire on anti-Sterlite protestors in Thoothukudi and have sought a reply from them.

While the unit has faced resistance since the beginning, it received a Consent to Establish in 1995 from the TN government. Public support for the anti-Sterlite movement grew after an alleged gas leak on March 23, 2013, in which at least 50 employees of a nearby company were affected.

While former chief minister J Jayalalithaa ordered the closure of the unit on March 29, 2013, the Supreme Court allowed operations to continue after penalising the company Rs 100 crore on April 2, that year.