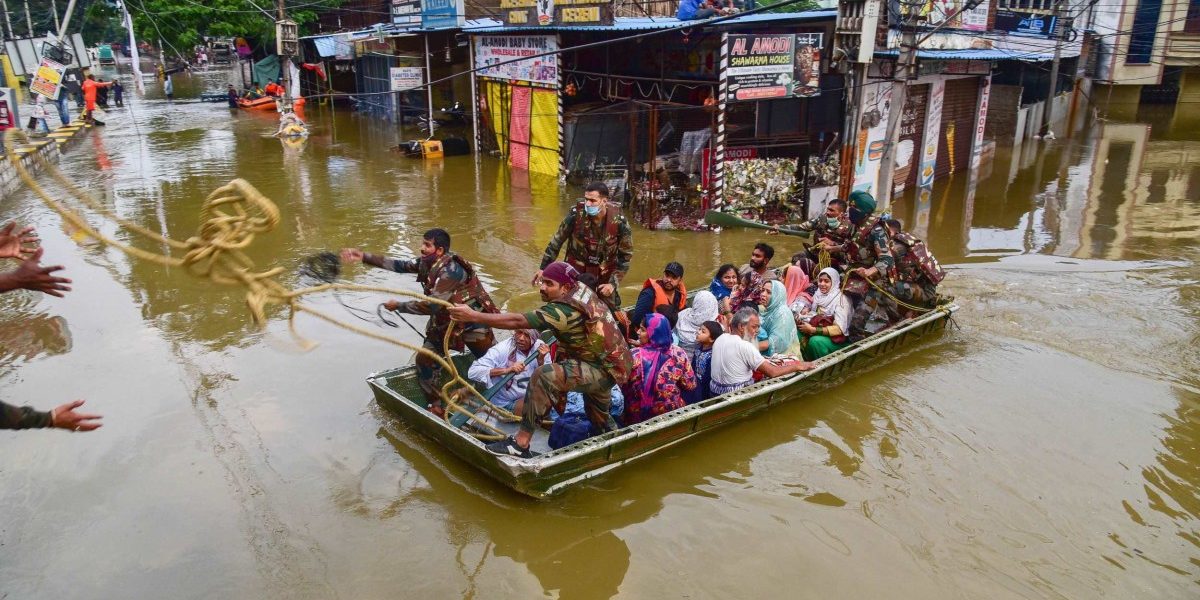 Rescue operations being carried out for locals to move them to safer places following heavy rain, at Al Jubail colony in Hyderabad, Wednesday, October 14, 2020. Photo: PTI

Hyderabad: While Telangana chief minister K. Chandrasekhar Rao (KCR) has touted Hyderabad as a ‘global city’, the capital was hit by flash floods earlier this week and has remained cut off from the rest of the world after major roads were washed away. Experts have attributed this turn of events to poor urban planning, a woeful drainage system and the pitiable condition of the Musi river, multiple streams and water-storage tanks, as a result of unplanned urbanisation.

Most parts of Hyderabad lost power and internet connectivity for two days following the floods. The state government has already estimated the losses to amount to Rs 5,000 crore. In a letter to Prime Minister Narendra Modi on Thursday, chief minister KCR sought immediate relief of Rs 1,350 crore from the Centre.

Although official figures aren’t yet available, reports suggest the floods have already claimed more than 50 lives in the state as well as have left thousands homeless (as on October 16 morning). Hyderabad MP Asaduddin Owaisi, a member of the All India Majlis-e-Ittehadul Muslimeen (AIMIM), said in a tweet on October 14 that a boundary wall (of some sort) had also collapsed in the Mohammedia Hills part of the city, killing nine people and injuring several others, many critically so.

Some parts of the city reportedly received 32 cm of rain in 24 hours – the highest in a century. According to unofficial accounts, multiple teams of the National Disaster Response Force and army personnel have set out by boats to evacuate stranded people.

The last time the city saw serious flooding was in August 2000, with rainfall of 24 cm in a single day, claiming 15 lives. In 1908, the River Musi was in deluge, subjecting leading to as many as 15,000 deaths. This calamity prompted the government to rope in veteran irrigation expert Mokshagundam Viseswarayya for a study on flood mitigation. Osman Sagar and Himayat Sagar were built to act as flood control centres as a result of the expert’s recommendations. But one of his vital recommendations – a modern drainage system – still remains a dream.

According to K.J. Ramesh, former director general, Indian Meteorological Department (IMD), urban flooding occurs due to the incapacity of the city to handle rainwater during extreme rainfall events. Speaking to The Wire, Ramesh underlined the need to build climate-resilient infrastructure in cities on a priority basis, as a deterrent against disasters of this kind.

Hyderabad is endowed with a system of catchments. Its western edges are in the Godavari river basin (from Kukatpalli, Ramachandrapuram to Gachibowli) while its eastern part is in the Krishnaa river basin. The Deccan region as a whole has a chaotic drainage pattern – water does not flow in a single direction, as the slope moves in multiple directions.

In a 2016 report, the Centre for Science and Environment estimated that in the last 12 years, Hyderabad has lost 3,245 hectares of wetlands. The report further said that urban water bodies have been a victim of unplanned urbanisation, facing serious threats such as encroachments, disposal of sewage and groundwater decline. 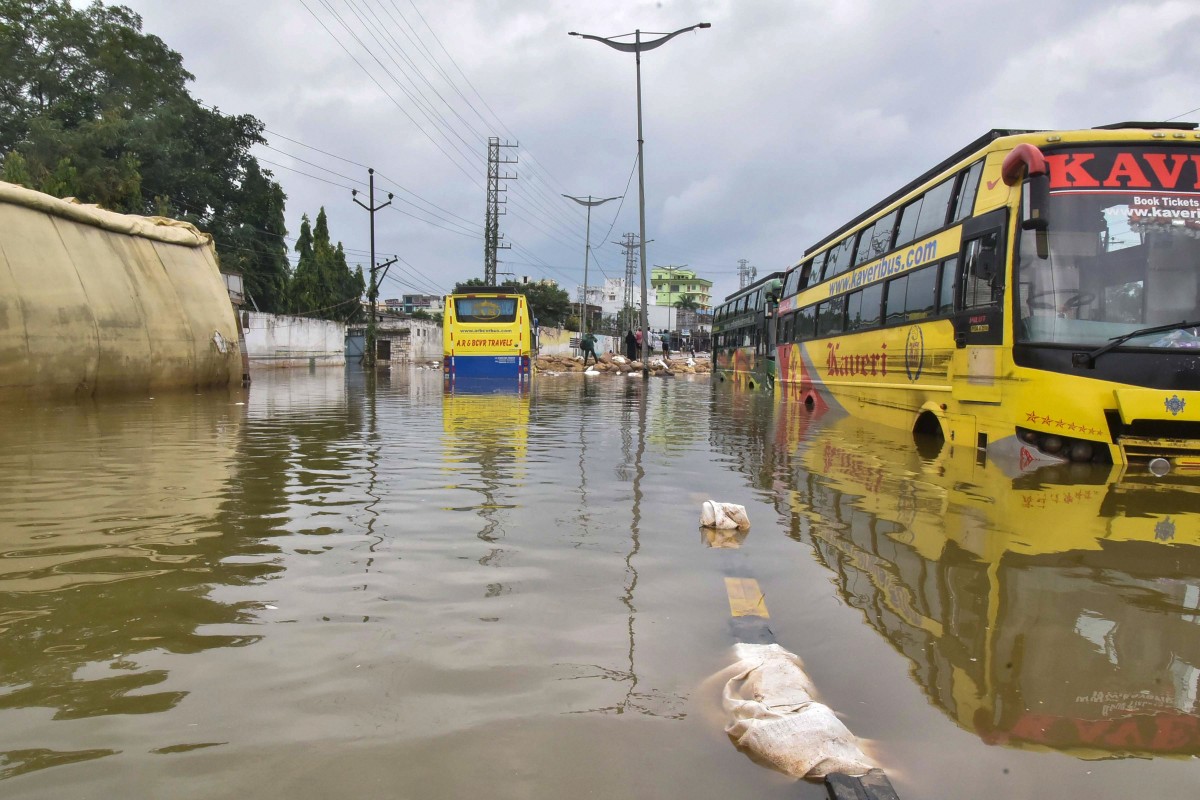 The Telangana Rashtra Samithi government headed by KCR established the Musi Riverfront Development Corporation and gave it Rs 1,665 crore in 2017, with the express objective of cleansing the river of encroachments and effluents. But the mission failed to move forward, though the corporation has paid Rs 3.15 crore in salaries  annually nonetheless. A survey undertaken by the corporation revealed that the river that criss-crosses the city is cluttered with 12,000 encroachments in the form of structures of varying sizes. The decision to remove such encroachments is in limbo for want of permission from the government.

The government’s ‘lopsided’ priorities have been blamed for the nightmares the city is currently passing through. C. Ramachandraiah, a professor at the Hyderabad-based Centre for Economic and Social Studies, told The Wire that the TRS government in the last six years of rule only focused on flyovers and bridges, and actively made way for rapid urban development with a scant regard for flood mitigation plans in the city.

The course of the Musi river has been narrowed at many places in the city because of encroachments. Its path has to be straightened by removing high-rise buildings that came up on the river bunds to make way for free flow of waters. The government should prepare itself to relocate and rehabilitate the dwellers residing on the river bunds, Ramachandraiah said.

Nalas (streams) and drainage channels are getting choked with construction debris, and domestic and industrial waste, causing flooding, he added.

Who is to blame?

Everyone is complicit in making public life miserable in Hyderabad, says civil society member Raka Sudhakar. Governments in the past and present have been choosing nalas as ideal places for implementing housing schemes for the urban poor. The erstwhile Congress government proposed to build houses under the Rajiv Griha Kalpa along the course of nalas, and the present TRS government too has planned two BHK flats at the same places, Sudhakar pointed out.

People making a living on encroachments on tanks and nalas in the city are estimated to be between seven and ten lakh. That over 1,000 colonies were effected by the recent floods points to the volume of encroachments. No party, apparently, can afford to antagonise such a large number of people before elections for the Greater Hyderabad Municipal Corporation scheduled in November.

Corporate hospitals and even luxury hotels have been allowed to come up on nalas, with impunity. Necklace Road was built on nine channels that bring sewage water into the Hussain Sagar lake from different parts of the city, but these channels are reportedly now narrow as a result of road building.

During floods, waters flow in the opposite direction, thereby flooding vulnerable areas for want of an outlet at the mouth of the lake. The authorities reportedly narrowed the outlets with meshes so as to prevent garbage and other waste from entering the water body.

TRS’s urban development minister K.T. Rama Rao, in turn, taunted the Union minister, asking why he failed to bring sufficient funds from the Centre for city development. And so, the blame game goes on till the upcoming municipal elections.