Technological advancements like miniaturisation of sensors, high-speed data transfer and enhanced storage capabilities have led to a new wave of satellites specially built for tracking pollution and pinpointing sources of emissions.

“The impact of global warming would be much more severe than the Great Depression; it would be ten times as deep as the more recent Great Recession, which still so rattles us. And it would not be temporary. It is hard to imagine any system surviving that kind of decline intact, no matter how big”.
∼ David Wallace-Wells, The Uninhabitable Earth: Life After Warming

Calling climate change an impending catastrophe would amount to a fatalistic resignation – deeming it inevitable and shirking from what ought to be done. As we build our future on unprecedented technological progress, we undermine the climate at our own peril. Greenhouse gases such as CO2, NO2 and methane are the main causes of global warming, leading to climate change and extreme weather conditions. And the fight against pollution is an essential part of mitigating climate change.

Amidst this bleak view, satellites have come to our rescue. Technological advancements like miniaturisation of sensors, high-speed data transfer and enhanced storage capabilities have led to a new wave of satellites specially built for monitoring pollution and tracking the sources of emissions. This has enabled organisations to gain actual insights into the nature of pollution and formulate strategies to tackle it.

“The advent of smaller, more affordable satellite platforms, combined with technological breakthroughs in the miniaturisation of instruments, is opening a new world of possibilities to gather even more critical data [in this field],” says Jean-Francois Gauthier, director, business development, GHGSat, a NewSpace startup based in Montreal, Canada.

Around a dozen governments and private companies are planning to launch satellites that can pinpoint the source of pollutants and greenhouse emissions. Availability of satellite data on emissions has also contributed to increasing awareness about the scourge of air pollution and has led to the formation of public action groups.

Copernicus Sentinel-5P, launched by ESA (European Space Agency) in October 2017, is said to be the most advanced pollution monitoring satellite in the world. It tracks carbon monoxide, nitrogen dioxide and ozone, along with aerosol. It also monitors formaldehyde, which is one of the sources of carbon monoxide. Insights gained from Sentinel-5P data has shown that most of the air pollution globally is anthropogenic, and has impelled policymakers to take adequate actions.

“Sentinel-5P can clearly show the sources of air pollution at the global level. In Europe, there are EU Directives (2008 and 2016) that aim to reduce the exposure of European citizens to air pollution to reduce emissions,” explains Dr Claus Zehner, ESA/ESRIN, Sentinel-5 Precursor, Sentinel-4, and Sentinel-5 Missions Manager. 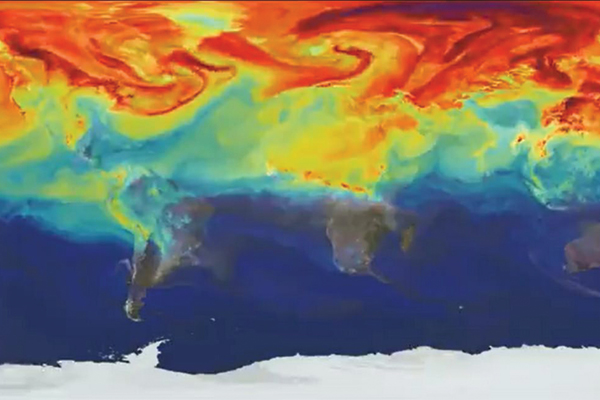 What gives Sentinel-5P an edge over previous ESA satellites (GOME, GOME-2, SCIAMACHY and OMI) is that it measures down to the surface in case of clouds, generating accurate information on air pollution. Sentinel-5P fills the gap in air quality measurement between ENVISAT and Sentinel-4 (geostationary) missions. For this reason, its instruments will be hosted on EUMETSAT satellites, which are scheduled to be launched from 2023.

Startups in the fray

Realising the potential in this segment, a plethora of startups have jumped into the fray. Identifying the exact sources of emissions and taking desirable actions to curtail them can check global warming.

“Methane, a greenhouse gas, is responsible for 25% of global warming. By identifying where exactly it’s being emitted and then monitoring it, we can track it and see the effect,” says Yotam Ariel, CEO, Bluefield, a startup based in San Francisco, US. Bluefield is funded in part by Village Global LP, a venture capital firm backed by technology moguls such as Bill Gates, Jeff Bezos and Mark Zuckerberg.

Ariel founded Bluefield with the vision for it to be the ‘Breathing Monitor’ of the planet by using satellites to track greenhouse emissions and other pollutants. The company will deploy its first microsatellite by the end of 2020 or early 2021, and eight other such satellites by 2023.

“Methane has a Global Warming Potential (GWP) 28 to 36 times greater than CO2 over 100 years. This means that stopping methane leaking to the atmosphere has a very large positive impact,” says Gauthier of GHGSat.

The company aims to become the global reference for remote sensing of greenhouse gas (GHG), air quality gas and other trace gas emissions from any source in the world. Its demonstration satellite was successfully launched in June 2016. GHGSat C-1 satellite is expected to be launched this year. 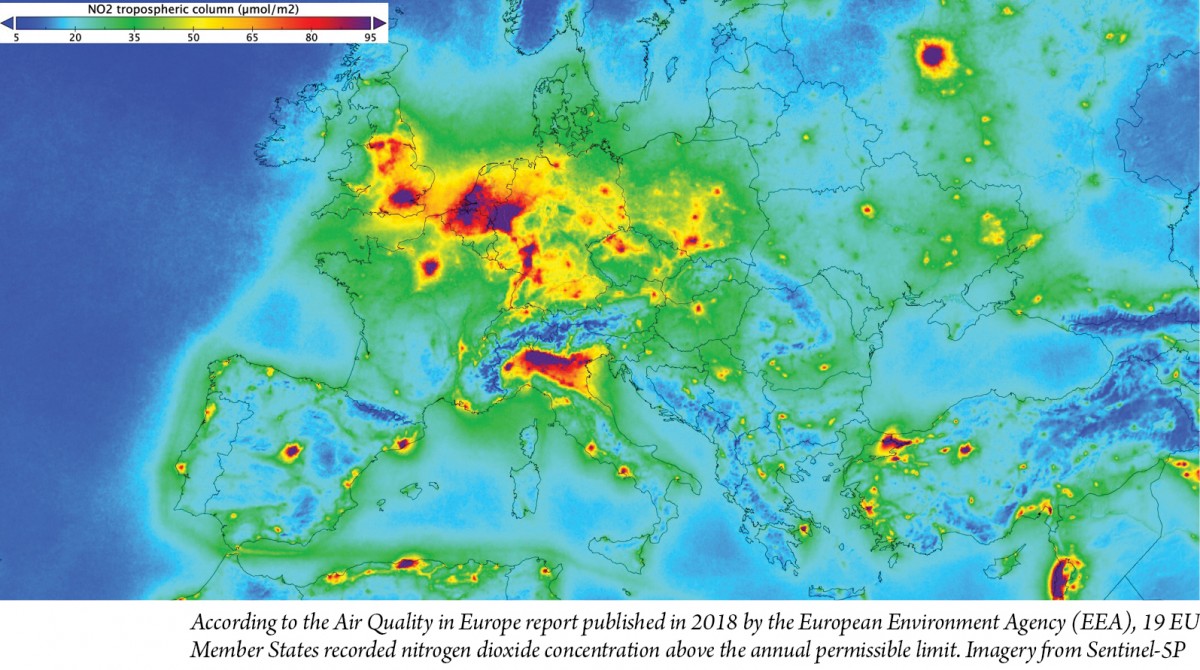 Most of the methane emissions are from oil and gas industry, and current satellite monitoring lacks the precision to pinpoint the exact source. The existing methane monitoring satellites have 1 km or more resolution, which means they can only see a region or an area, but cannot identify the exact source like a specific storage tank or an oil and gas well. “We can pinpoint the meeting source within 20 meters,” says Ariel.

Tracking methane is quite expensive currently, but the cost is expected to go down substantially in the coming years. “It costs several hundreds of dollars for one measurement, for one site on location. Globally, there are $3 million such sites. So, to measure all the sites in the world just once would cost a whopping $1.5 billion,” he explains.

WattTime, a non-profit Artificial Intelligence startup founded in 2017, plans to use satellite imagery for tracking pollution from every single power plant in the world. The company intends to use data from a number of sensor operating at different wavelengths. Infrared imaging would be used to detect heat. WatTime would use satellite imagery from government programs as well as private companies. Its data would be available publicly.

After a failed attempt to launch its first spacecraft dedicated to studying atmospheric carbon dioxide (Orbiting Carbon Observatory – OCO) back in 2009, NASA was successful in launching OCO-2 in 2014. OCO-2 is the second successful high-precision (better than 0.3%) CO2 observing satellite after Japan’s GOSAT. The American space agency is now working on OCO-3, which will be developed and assembled by using spare materials from OCO-2. The instrument will be hosted on the International Space Station.

By early 2020, the US is scheduled to launch the Geostationary Carbon Observatory (GeoCarb) to track global carbon cycle from a geostationary orbit, making it the first NASA satellite to measure methane near Earth’s surface. GeoCarb will gather ten million daily observations of the concentrations of carbon dioxide, methane and carbon monoxide. 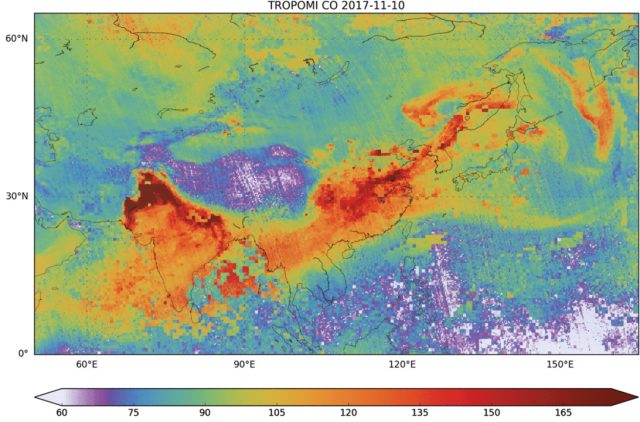 Air pollution is a grave issue in China, particularly in the bustling megacity of Beijing. China is among the few countries that have launched their own satellites for monitoring pollution. Satellite data has assisted the government authorities in reducing pollution considerably.

“Monitoring air quality by satellite remote sensing technology is a new method that is fast growing. But it has only started developing recently,” emphasises Lily Xu, CEO, SpaceWill, a holding subsidiary of ChinaSiwei, which is part of China Aerospace Science and Technology Corporation (CASC).

TanSat is a Chinese satellite that tracks CO2 in the atmosphere. By monitoring concentration and flow of CO2 levels every 16 days, the satellite helps understand climate change by analysing the source of carbon emissions.

Last year, China launched Gaofen-5 that can obtain spectral information from ultraviolet to long-wave infrared radiation. It is the world’s first full-spectrum hyperspectral satellite for comprehensive observation of the atmosphere and land.

“By analysing the images, we are able to detect diffused pollution sources of a construction site, bare land and sand area in Beijing. It provides useful information which can benefit government agencies in managing remedial measures to improve air quality and environment,” adds Lily Xu.

Monitoring greenhouse emissions and then analysing the data to mitigate climate change requires a collaborative approach. “Greenhouse gas measurements are very difficult and no single country can make all the necessary measurements alone,” underlines Harry Cikanek, director of NOAA’s Center for Satellite Applications and Research.

For instance, the Japanese Ministry of Environment and the National Institute for Environmental Studies (NIES) shares the GOSAT 1 and 2 data with NASA and other international scientific organisations. OCO data is open-sourced and freely available to the public.

NASA, NOAA and the EPA have together launched project ‘IDEA’, which combines NASA and NOAA satellite data with the EPA’s air quality index, thus improving the accuracy of air quality forecasts.

An interesting private-public partnership emerged following the massive natural gas leak in California in October 2015 – the biggest in American history – when a broken oil well released 100,000 tonnes of methane. Soon after this, California firmed up plans to launch its own pollution monitoring satellite in partnership with Planet.

Planet, which provides near-real-time imagery of any location on Earth, will build and operate the satellite, which will be fitted with high-quality sensors that can point to the exact source of emission.

“The partnership aims to achieve a long-term, sustainable model for developing satellite technologies that would enable us to collect certain climate data to encourage better decision-making. With an accurate measurement of and greater transparency on climate data, governments, businesses, scientists and citizens around the world can develop more targeted and effective mitigation strategies,” explains Robbie Schingler, co-founder and chief strategy officer at Planet.

Copernicus is an open platform with a collaborative approach, and on similar lines, open data needs to be prioritised at the global level for reducing pollution. “An open data policy is the key to making people aware about air pollution and its possible impact on their daily lives,” says Dr Zehner.

Highly accurate analysis tailored for the requirements of campaigners and policymakers at various levels is needed. There is also the need to bridge the gap between availability and analytics capability. “There is an unlimited need for such analysis and very little capacity for doing it in a way that is responsive to the needs of campaigners, lawyers, and policymakers,” stresses Myllyvirta.

Ruing the mismatch between the profusion of satellite data and expert analytics, she feels that the biggest bottleneck is in the analysis. There are tens of thousands of air quality monitors generating real-time air quality data that is available publicly, and satellites capture every square kilometer of Earth’s surface multiple times every day. However, the number of people working to translate this into actionable insights can fit into an auditorium,” she says. Also, since pollution monitoring is not widespread so there is still much scope left for technological convergence and interoperability.

“Most existing air qualities monitoring technologies are empirical. They can’t be used in other areas, as they are less systematic and practical. There are still many key technologies for satellite data processing, parameter retrieval, application model development, thematic data production, and business application system that have not been solved yet,” says Lily Xu.

Fusion with AI and future trajectory

AI-based algorithms would boost pollution monitoring capabilities. AI and Machine Learning are critical to GHGSat. “By combining our unique data with other sources of relevant information (flaring, production data, other satellites, etc), we derive very specialised and actionable insight our customers can use right away. We are also able to optimise the efficiency of our system by using these tools,” emphasises Gauthier.

“AI can be used specially to speed up processing time and might, therefore, play a huge role in future planned space missions to provide fast information to end-users,” says Dr Zehner. Lily Xu agrees with Dr Zehner on the tremendous potential of AI, adding that new innovations in AI, Machine Learning and Data Science would open up opportunities and lead to more advancements in pollution monitoring.

“Geostationary satellites will be a major step once they become available – going from one frame per day to almost continuous imagery. This will make a huge difference,” emphasises Myllyvirta.