New legislation has rendered residents and wildlife as collateral damage of ‘national importance’. 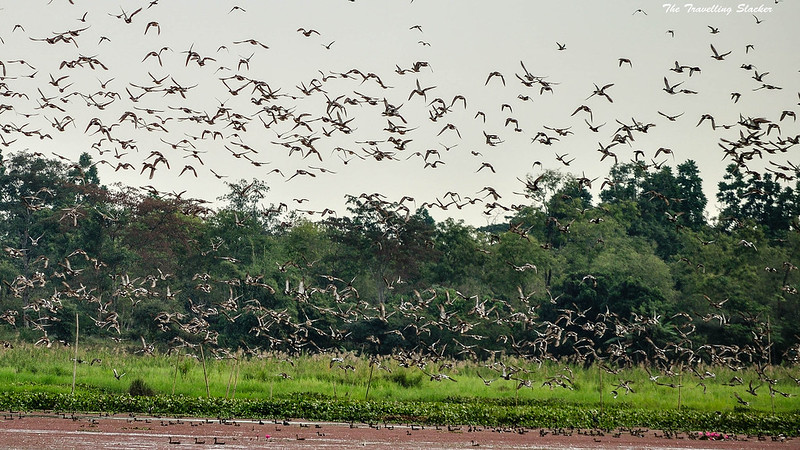 This clearance is not a standalone event. It has history – a series of events in which environmental laws were moulded and interpreted to suit the company and in ‘national interest’.

But before we go about digging the history of this environmental clearance, let us essay the environmental procedures laid out here.

For any industrial, mining or infrastructure project to come up in an area, an environmental clearance from the Ministry of Environment, Forests & Climate Change (MoEFCC) or a state authority is mandatory.

The clearance process as prescribed in the Environment Impact Assessment (EIA) Notification, 2006, has several steps. It also categorises projects into A and B based on their potential impact and sensitivity of the location they seek to come in.

A projects are appraised by the Centre and B, by the state. On receiving initial application from a project proponent, a special panel, an ‘expert appraisal committee’ (EAC), issues a Terms of Reference (ToR) to a project.

Based on the ToR, the project proponent prepares a Draft Environment Impact Assessment (EIA) Report, conducts public consultation on it to gather concerns and obtain views of those who will be or are likely to be affected by the project. Based on the public hearing, the EIA report is finalised.

The EAC then reviews the EIA report and decides whether to recommend the project for environmental clearance or not. If projects are looking to be set up in wildlife areas or forests, they need permissions from the wildlife and forest divisions of the environment ministry or department at the state level too.

While we lay all these generic steps out, it is good to bear in mind that the expert panels, state authorities and the ministry itself have ignored these procedures or disregarded the principles of public participation and democratic decision making at several instances.

OIL has obtained environmental clearance for linked projects to develop infrastructure such as pipelines, oil and gas collection stations for exploration and excavation of oil and gas within 10 km of Dibru Saikhowa National Park. Dibru Saikhowa National Park and Biosphere Reserve lies at a point where three rivers, Siang, Dibang and Lohit, meet to form the Brahmaputra.

The park is a mosaic of wetlands, swamps, grasslands and forests and hosts several critically endangered bird species and endangered Gangetic Dolphin.

Now it needs to obtain an environmental clearance to explore and excavate oil in this vicinity.

The only hurdle is a Supreme Court judgment of April 2014 that restricts mining within one km boundary of a protected area. So, the company files a petition in the court seeking that the order be restricted to only mining of minerals and not to apply to oil and gas.

Also read: Etalin Is Only One of Many Problem Projects Closing in on Green-Light

On April 12, 2016, the Supreme Court passed the application to the Central Empowered Committee (CEC). The CEC in its report on May 9, 2016, recommended the proposal to the standing committee of the National Board for Wildlife (SC-NBWL). Thereafter, between May 2016 and April 2017, the Supreme Court directed the SC-NBWL three times to consider the proposal and take a decision on the project.

Soon after the CEC decision, in June 2016, OIL applied for a ToR for exploration of oil and gas in the said area. The EAC discussed the application in its meeting in July and granted a ToR on August 3, 2016.

This ToR required OIL to conduct a public hearing on the proposed site of the project. However, OIL requested the EAC to exempt it from conducting a public hearing. The EAC obliged and the ToR was amended in February 2017, to take out the requirement of public hearing.

The reason for this exemption was that OIL had conducted public hearings in July and August 2011 in the same district with relation to another drilling and exploration project by it. Having obtained what it sought, OIL went about making an EIA report and submitted the same and other documents for an environmental clearance by the ministry in February 2019.

In this time, OIL obtained a recommendation from the SC-NBWL. The wildlife recommendation came despite the company’s past record of poor compliance. While considering wildlife clearance for a pipeline construction in 2013, the members of a standing committee of NBWL had observed  in a site visit that OIL had initiated construction of the project before it received a clearance and disregarded ecological and livelihood concerns.

The standing committee, however, recommended the project with a suggestion that OIL provided an undertaking on environmental safeguards and its liability in the event of accidents. While making its ‘strong disapproval’ of OIL’s request for a post-facto clearance known in the site visit report, the members suggested that OIL should provide “financial and in-kind support on a rolling basis to the Assam forest department for a specific long term (say, for at least 10 years)”. 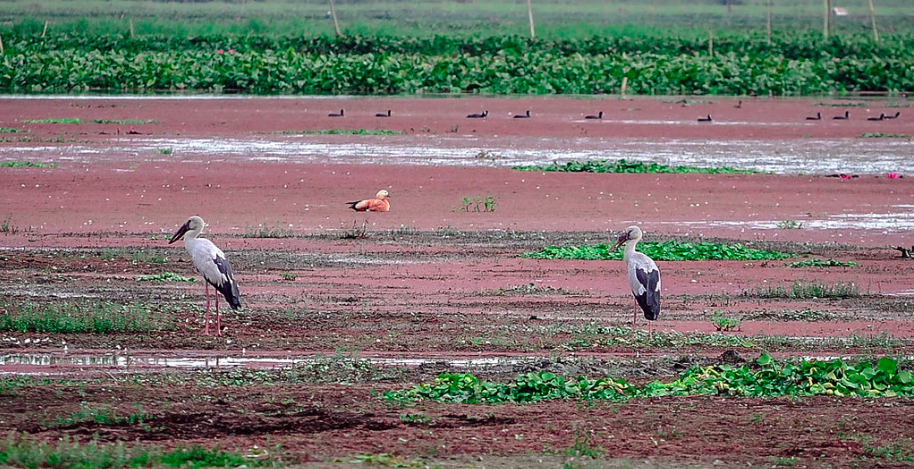 But in 2019, the MoEFCC raised an objection to the EAC recommendation of grant of environmental clearance to OIL without a public hearing. So, the project was discussed again in May 2019.

The EAC, on the ground that the project was of ‘national importance’ and the fact that OIL had conducted a public hearing in December 2016 in the same district, once again recommended the exemption but it sought to know the distance of the proposed wells from the location of the previous public hearing.

OIL claimed, “Conducting public hearing in the area is a big challenge due to unruly acts by the local pressure groups”.

Going by OIL’s claims the committee concluded that conducting a public hearing in the area was “practically impossible” and that “the project will meet its death” due to “multiple political groups and NGOs” with “vested interests”.

The argument was supported by the fact that it took OIL four years from issuance of ToR in 2012 to conduct a public hearing in 2016 in an earlier project of drilling in Khagorijan area. The EAC did not look into the reasons behind strong local opposition against the project. Instead, in its meeting in December 2019, it cited vulnerability of the area and anticipated economic and resource loss to the company as reasons for sticking to the decision of exemption.

In fact, the EAC meeting minutes even provide a calculation of losses to the country due to the delay conducting a public hearing in the project may cause! 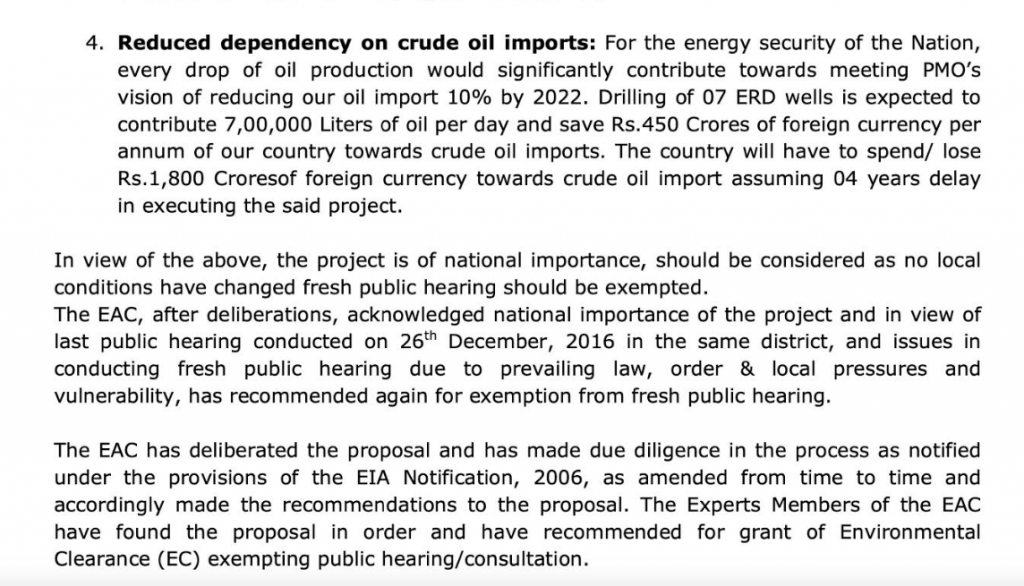 It stated that in view of “PMO’s vision of reducing oil imports by 10%”, approval from the SC-NBWL, a favourable order from the Supreme Court, and a presumption that local conditions have not changed since the last public hearing, the EAC recommended the project for grant of clearance without public hearing.

Giving the same reasons and requesting for the same old public hearings to suffice for the need of fresh consultations with the local populace, OIL India sought and was granted exemption from a public hearing for yet another proposal for drilling of wells, laying of pipelines and construction of gas stations in March 2017 by the EAC.

Locals and conservationists raised concerns regarding the impact of the pipeline on Maguri Motapung Beel wetland. They asked how the omission of a public hearing could be allowed at this juncture.

While all along the MoEFCC had objected to a public hearing exemption, what follows is surprising.

In less than a month after the EAC recommended the project, on January 16, 2020, the MoEFCC made an amendment to the EIA law and made all on and offshore oil and gas exploration projects ‘B2’.

B2 projects do not need public consultations. And on May 11, 2020, the MoEFCC granted environmental clearance for the drilling and testing of oil and gas at seven sites in Dibru Saikhowa. It seems the objections that the MoEFCC had raised regarding the exemption were only to get EAC to record detailed reasons for why there should not be a public hearing.

The environmental clearance created furore on social media platforms, leading OIL to issue a clarification that Extended Reach Drilling (ERD) technology would be used from 1.5 km outside the park and no drilling would take place within the park boundaries.

A week after OIL issued this clarification in an attempt to portray the project as harmless, a blowout happened at Baghjan oil field, on an ongoing project of OIL. It has caused damage to wildlife and 2,000 people have been evacuated till date. Many still complain of difficulty in breathing.

If a public hearing conducted in the vicinity of a particular project can suffice for another project (never mind the time lag), should this incident and past violations that occurred in the same area by the same company not impact clearance for its future projects? However, our environment ministry has increasingly been relying on post facto approvals, and a ‘pollute and pay’ principle.

Incidents like this oil spill and the Vizag gas leak only show how crucial a precautionary approach is.

As we write this piece, the gas is still leaking and OIL has decided to consult foreign experts to plug it.

Also, a new oil and gas exploration project by OIL in the same district is under consideration. This one, as B2-category project, will be appraised at the state level and will not require a public hearing.

This time, OIL will not have to persuade committees and authorities to let it bypass the public hearing.

The exemption is part of the law now. A law that has rendered the locals and wildlife as collateral damage of ‘national importance’.

Meenakshi Kapoor and Krithika A. Dinesh are independent researchers in environment policy.