How Does Plastic Pollute the Ganga? An All-Women Scientists’ Expedition Is Looking for Answers

India and Bangladesh are battling plastic build-up through legislation and policies. The research expedition could help inform pollution management practices along the Ganga. 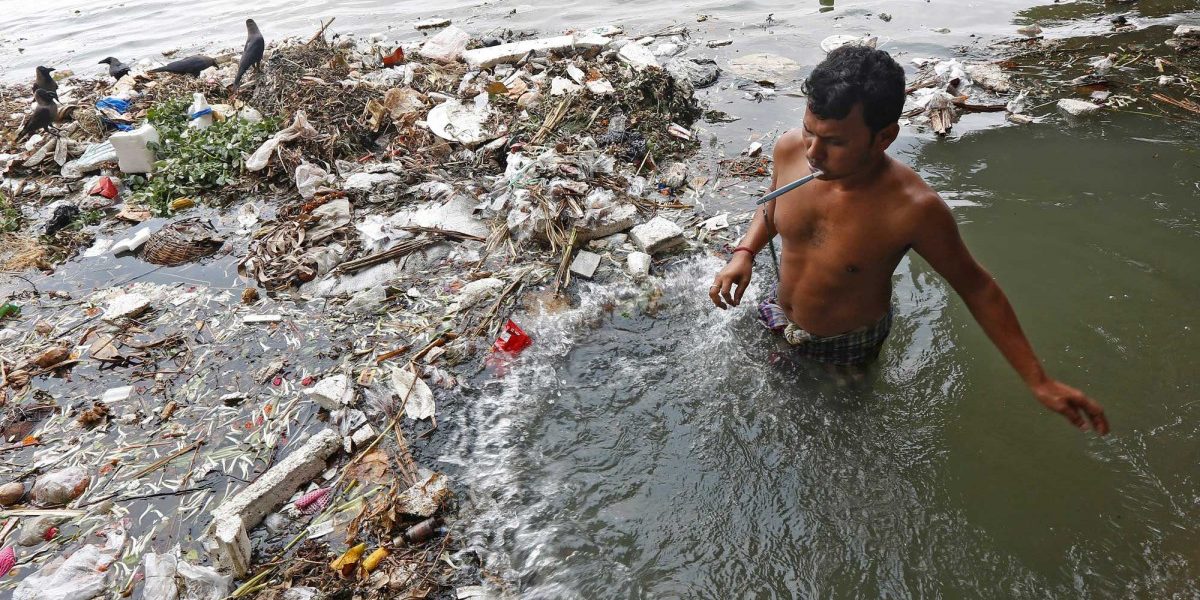 A man brushes his teeth as he stands in the polluted water of Ganges river in Kolkata, India. Credit: Reuters/Rupak De Chowdhuri

Under the scorching summer sun, a motley crew of women scientists, engineers and explorers armed with a range of scientific equipment, emerged from a boat and fanned out in different directions, along one of the world’s most iconic waterways – the Ganga.

“It was quite the showstopper,” recalled marine biologist Heather Koldewey who co-leads this women-led team studying plastic pollution in the Ganges river in India and Bangladesh in the National Geographic-backed “Sea to Source: Ganges” river expedition.

Koldewey and environmental engineer Jenna Jambeck, are leading an international team (both culturally and scientifically diverse) of 20 to trace and document how plastic waste travels from source to sea and to fill critical knowledge gaps around plastic flow, load and composition.

In partnership with the Wildlife Institute of India (WII), the University of Dhaka and WildTeam, the expedition travelled upstream with the Ganga-through the Bay of Bengal where the river drains into the sea to its origin in the Himalayas to characterise plastic waste in the river. After entering Bangladesh, the main branch of Ganga is known as the Padma.

Having completed the first round of their expedition in June, the team plans to repeat the exercise after the monsoon season in October to capture seasonal variations in mapping plastic pollution in the air, water, land and aquatic species.

“Starting at the ocean end we know there are 8 to 12 m metric tonnes of plastic coming into oceans every year and that rivers are sources of that plastic but the data on rivers are based on models of population and waste management (how many people there are and what is the waste management structure) and there is sort of extrapolation of that but we don’t exactly know what is going on, on the ground,” Koldewey told Mongabay-India.

Wildlife Institute of India’s Anju Baroth says this expedition will serve as a model for other such expeditions across the world.

“Given the global theory of rivers acting as a carrier for plastic waste to oceans, this expedition is world’s first ground-truthing effort to actually verify the plastic load that a freshwater body carries to the sea and verify the theory as well as models proposed in various studies,” Baroth told Mongabay-India.

The 2,525 km-long Ganga binds five Indian states along its main stem and 11 in her entire basin that is home to 625 million people. Despite its cultural and religious importance, the river has rapidly degraded since the 20th century due to human activities. Ganga is one of the 10 rivers responsible for around 90 percent of the plastic that ends up at sea.

Koldewey notes the timing is right for an elaborate and targeted expedition as their’s, referencing Indian Prime Minister Narendra Modi’s commitment to clean the Ganga and his pledge to end single-use plastic by 2022.

“The political framing was good and there are a lot of good initiatives already happening for cleaning up the Ganga and tackling single-use plastic in many Indian cities,” said Koldewey.

For Bangladesh, which prides itself for its riverine nature (with one of the largest networks in the world and a total of about 700 rivers including the Ganges-Brahmaputra River Delta), the plastic pollution problem has a geographical context.

The country’s precarious position along the long Bay of Bengal coastline means it is at the receiving end for transboundary movement of numerous pollutants, Gawsia Wahidunnessa Chowdhury of the department of zoology at the University of Dhaka, who leads the Bangladesh team, told Mongabay-India.

The sea-based sources of plastic in the country’s waters include merchant ships, ferries, fishing vessels, offshore oil and gas platforms, and fish farming installations, while the land-based ones include municipal and industrial wastes. “Most of the industries in Bangladesh are situated near the major river systems such as the Buriganga, Shitalakkhya, Balu, Turag, Karnaphuli, Rupsa and Meghna rivers all of which end up in the Bay of Bengal,” said Chowdhury.

The country was the first in the world to ban polythene bags in 2002 and production, marketing, carrying, and use of plastic bags were made a punishable crime.

“The ban was implemented for the first couple of years smoothly and appeared as a success for the time being but have not followed through with appropriate enforcement,” said Chowdhury, adding the country has aligned itself to global commitments to reduce marine pollution by 2025 as also introducing reuse and recycling strategy for waste management domestically.

How the expedition works

The scientific expedition moved through 10 sites by boats, train, boat and road, across seven weeks, spending three days per site.

From backstreet fish markets to local scrap dealers, colleagues from India, Bangladesh, the United Kingdom and the United States of America, worked with communities along the Ganga to understand the waste infrastructure and challenges.

They split into three teams to cover land, water, and people. The land team tracked land-based litter, waste management infrastructure, and understood the dynamics of the informal recycling sector. The water team went into the river and collected air, water, and sediment samples to analyse both micro- and macro-plastics.

The socioeconomics team organised community focus-groups to discuss perceptions of plastic and the relationship between plastics and poverty among villagers and shopkeepers.

Also read: Ganga May Still Be Dirty, But the Modi Govt Spent Crores Advertising Its Cleaning

“We combined the simplest of methods with the newest innovations for science and solutions. We used a range of technology-from the lowest to the highest,” noted Koldewey with a laugh.

For instance, scientists dropped over 2500 wooden drift cards along the Ganga with the help of local communities to track litter with the Marine Debris Tracker app designed by the University of Georgia. Each one has a unique number and a message to Hindi and Bangla text in if found so we can record the location.

The team also deployed a new technology to track and retrieve plastic bottles to understand how waste drifts through a river. They placed satellite/cellular tags in discarded bottles to follow its course along the river.

“We also documented the plastic items that we were carrying with us including what we were wearing because we did have plastic on in terms of life-saving jackets etc. We ensured that we didn’t leave behind the plastic we had brought with us to India and Bangladesh. We carried them out after the expedition was over,”

As an all-female team, security was probably the biggest concern but in general, logistics and working conditions kept the members on their toes.

“We had to do socio-economic surveys, and for the communities, it was less intimidating in opening up conversations with us as women. Expeditions can be strenuous and we were there during the worst time in terms of the weather so we had to work around that. The Bangladesh portion was mostly on a boat and some of the team had never been on a boat,” Koldewey said.

In India, the expedition built on the baseline data generated on biodiversity profile, toxicology, genetics, community engagement and other aspects for all the Ganga states as part of WII’s Biodiversity Conservation and Ganga Rejuvenation project funded under National Mission for Clean Ganga.

Also read: Why Is Narendra Modi Allowing Nitin Gadkari to Destroy the Ganga?

The involvement of the Indian scientific team eased the expedition’s selection of sites for surveys and leveraged support of local resources (Ganga Praharis or Ganga ambassadors) for the socio-economic and education component of the project.

A cadre of about 1000 Ganga Praharis is trained for spreading the message of biodiversity conservation and Ganga cleanliness. These ambassadors were selected from each Ganga state from every possible village establishing deep roots and links within the society, explained Baroth.

Along the way, Koldewey and peers hope to change the face of expeditions and explorations.

“We are a very diverse group from different disciplines. The decision to be an all-female team was not explicitly deliberate in the beginning. We set off choosing the best people for the job, and they also happened to be women. We could change the face of what explorations and expeditions typically look like,” Koldewey said.

“Imagine we get to a place where 15 or 16 women get out which is a show stopper in itself and then we head into different directions. It was quite a sight and we did attract quite a lot of attention,” beamed Koldewey.

Baroth, like Koldewey, noted the coincidence that most of the members of this expedition happen to be women. “I consider science and scientists to be gender-neutral. However, the WII team had equal representation of women and men (out of four researchers two are men and two women; among six principal investigators, three are men and three women),” Baroth said.

This article was originally published on Mongabay and is republished here under a Creative Commons license.