Price of Silence: The Hirpora Wildlife Sanctuary Is a Paradise on the Brink

We must remember that Kashmir is Kashmir because of its natural heritage. But we seem to have forgotten, threatening a sanctuary not many know of and the world's largest wild goat that lives there. The Hirpora Wildlife Sanctuary as seen in Shopian, Jammu and Kashmir. Credit: Maxx786 at English Wikipedia, CC BY 3.0

Once a remote and untouched land, Hirpora Wildlife Sanctuary is now confronted with overexploitation and habitat destruction. Snow trout, markhor, musk deer, the Saussurea sacra and Primula reidii have all begun to disappear.

The Hirpora Wildlife Sanctuary (WLS) in Kashmir’s Shopian district is the catchment for the Rambiara and Aharabal, tributaries of the Jhelum, and its degradation will directly affect water flow in these tributaries, which in turn will severely impact the people dependent on it. This is for horticulture, agriculture and also because the catchment absorbs most of the rainwater. If overgrazing and habitat deterioration continue unchecked, then flash floods will become more common – as witnessed in 2014 and in June and July this year.

The catchment must be preserved to maintain ecological balance in the area. Damage to Hirpura WLS could also lead to increased human-wildlife conflicts, with species like the brown bear moving to lower in search of food. Hirpora’s verdant pastures provide sustenance to wild herbivores (including rare ungulate species such as the markhor and musk deer), and a healthier prey population for carnivores reduces the probability of human-wildlife conflict in the fringe villages.

The Supreme Court permitted the construction of a road cutting through the WLS with some pre-conditions, many of which the construction agency chose to ignore. For example, the government of Jammu & Kashmir is yet to reduce the livestock pressure in the WLS; this pressure has in fact increased because herders use trucks to transport their livestock on this road.

The recent power transmission line construction has been worse, as they took advantage of the 2016 uprising and constructed a road network inside the WLS in violation of the pre-conditions. They used helicranes and even claimed in a video that their noise could rupture the hearing organs of humans in the vicinity. What of the markhor and musk deer then?

The focus currently remains on the road and facilities along the road. The civil administration has also started dictating terms to the sanctuary, often in favour of violations. The civil administration seems least bothered about the sanctity of the WLS and the deterioration of the already fragile catchment. This has left wildlife authorities to fight frequently for the unique biodiversity in the area. 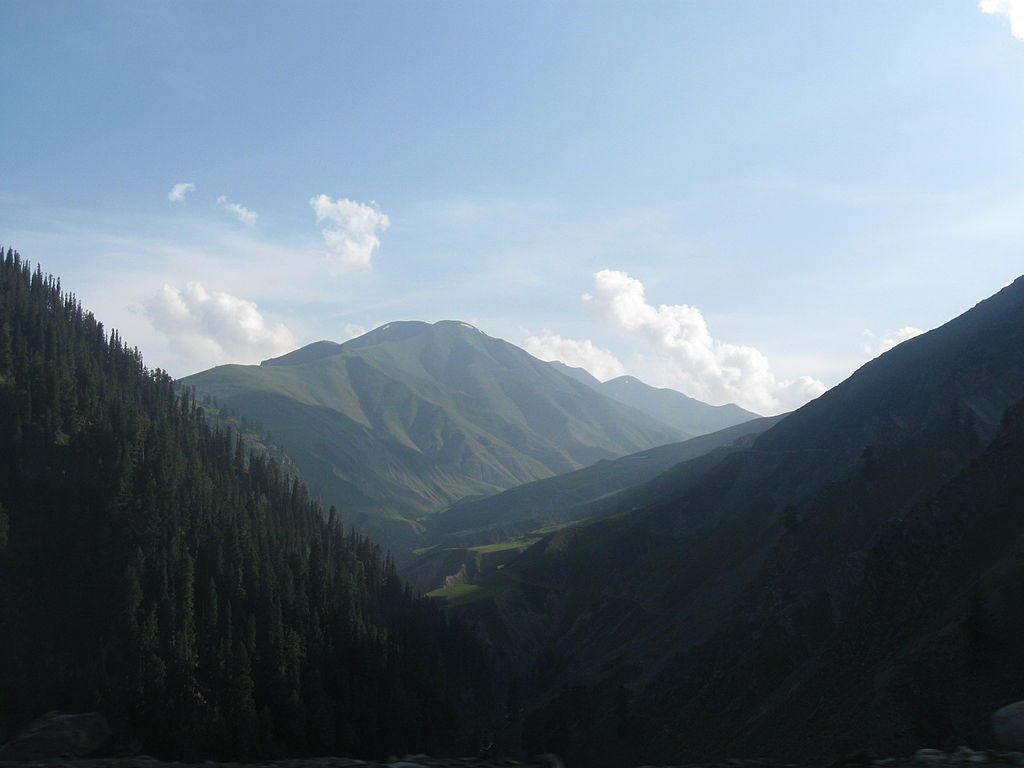 The Hirpora WLS was notified as a wildlife sanctuary to save the world’s largest wild goat – the markhor – together with the catchment where it lives. All stakeholders – including researchers like the author, the Department of Wildlife Protection, government agencies, livestock herders, villagers, civil society, judiciary and the media – bear responsibility for the degradation of this invaluable ecosystem.

For example, this writer is perhaps responsible for not having highlighted the issue in time. Perhaps I have been selfish so that my research in the area continues smoothly, in pursuit of better career opportunities as much as to have necessary permissions processed without hassle.

Politicians want their votebank to be happy, no matter the environmental cost. Local officials tend to keep their political and administrative bosses happy. The inhabitants of the fringe villages want to reap the benefits of the Hirpora landscape but refuse to acknowledge the impact of their transgressions on it. Migratory livestock herders and local shepherds are shifting to non-traditional herding practices to earn extra cash, no matter that such practices are unsustainable and will cause long-term damage.

The government wants to demonstrate its commitment to development, making decisions in haste that go on to have adverse impact on the ecology and environment. The media is more interested in breaking news. The judiciary has not asked the monitoring committee if the pre-conditions were met, and the monitoring committee never monitored the situation and raised no flags when they should have been. 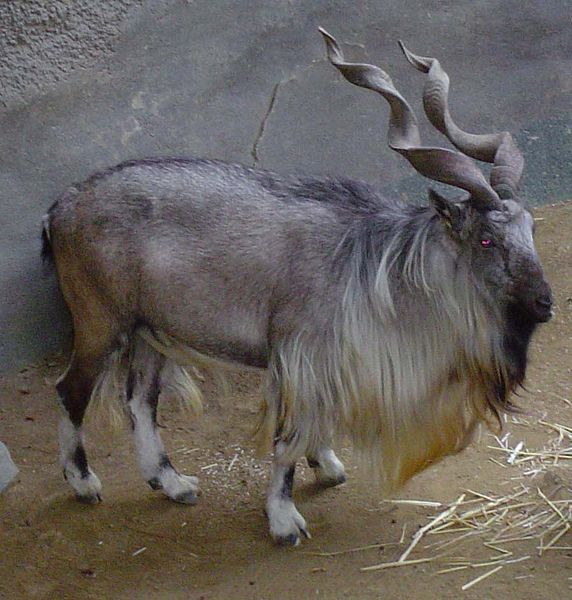 The horns of the Pirpanjal markhor are twisted like a corkscrew. Credit: Geographer/Wikimedia Commons, CC BY 2.5 Generic

Post-violations, construction companies pay monetary fines to make up for the damage. The better option would be to have equally important areas added to the protected areas network and so compensate for the loss to some extent. The compensation money goes to the Compensatory Afforestation Fund Management and Planning (CAMPA), which is under the state’s forest department.

In Jammu and Kashmir, the Wildlife and Forest Departments are separate. Forest officials have more expertise and experience in forestry and forest management than those involved in wildlife conservation, management or research. Therefore, it is sometimes difficult for wildlife officials to convince the Forest Department to allot CAMPA funds for non-forestry activities crucial for wildlife conservation.

The Compensatory Afforestation (CAF) Guidelines 2018 state that the major portion of the funds has to be spent on afforestation, with less focus on wildlife conservation, research and human-wildlife conflicts.

A large portion of wildlife areas in Jammu and Kashmir fall under cold deserts, alpine meadows, subalpine scrub and some of it is wetlands. So there should have a clear mention in the CAMPA to restore such ecosystems and habitats. If they had, planting trees would have been another violation because it disturbs the natural habitat.

Hirpora’s natural bounty benefits all local stakeholders but there is a lack of awareness about the need to safeguard it. Instead, the area’s natural resources are facing a tragedy of overexploitation.

Our collective ignorance has brought this beautiful and invaluable ecosystem to the brink – but we cannot afford to let Hirpora suffer in silence.

The Department of Wildlife Protection has to be more stringent in implementing laws that protect our ecosystems. They have a difficult job because nature conservation is among the lowest priorities of local authorities. Our politicians and policymakers have to be made aware of the importance of conservation, since many of them seem to be environmentally illiterate.

Civil society must also play a greater role in highlighting and protesting violations that destroy our wild habitats. The media in Kashmir has little interest in environmental concerns. I know that they feel they have more important issues to cover, but they must remember that Kashmir is Kashmir because of its natural heritage.

The balance between conservation and development has tilted inexorably towards the latter, even if at the cost of the destruction of our natural heritage. There is no doubt that development is needed but we have to be wise about it. We should explore options of saving the more fragile and critical ecosystems: diverting roads, transmission lines through less ecologically important areas and promoting eco-tourism instead of mass tourism in such fragile areas. 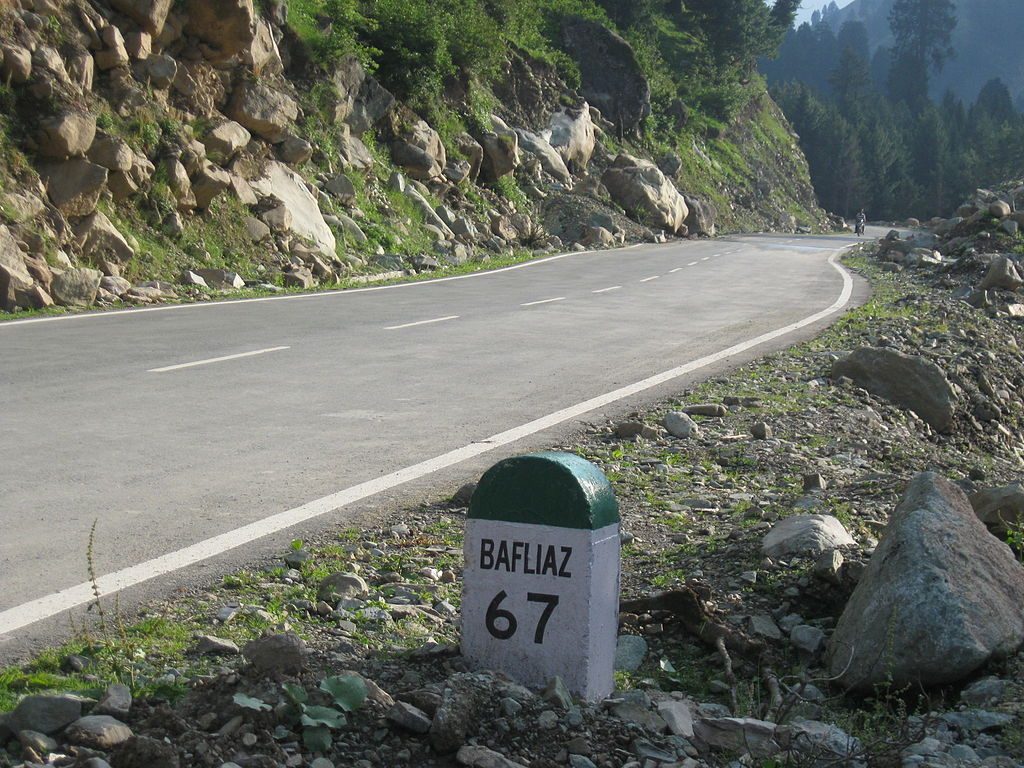 The Mughal Road cutting through the Hirpora wildlife sanctuary. Credit: Maxx786 at English Wikipedia, CC BY 3.0

For example, the power transmission line that now passes through Hirpora WLS should have come via the main Srinagar-Jammu Highway. Similarly, with the Mughal Road, a strategically placed tunnel could have prevented much of the destruction.

We also have to make user agencies accountable for violating pre-conditions set for development activities. Such violations have assumed a pattern. These entities first beg for permissions and promise to fulfil the pre-conditions, but ignore them once the clearances are received. The National Board for Wildlife and the Supreme Court must establish a mechanism to regularly monitor such projects and punish responsible organisations for violations and/or a failure to meet pre-conditions while the project is ongoing, rather than after the damage has been done.

We must act now. Do we want a repeat of the 2014 floods? Do we want our people to be like those in Delhi, choking on the very air they breathe? If we cannot save an area from the wrath of unwise development in some cases, we should at least vote for getting an equally important area protected than just agreeing for cash compensation.

It is vital that we act swiftly and work together to save the Hirpora landscape. The sustained support of policymakers, civil society, judiciary, the media and of course the people will be vital to preserve this fragile ecosystem for our future generations.

Riyaz Ahmad is the project head of Wildlife Trust of India’s Markhor Conservation Project in Jammu and Kashmir.