Why Some Himalayan Birds Are Now Climbing Higher to Nest 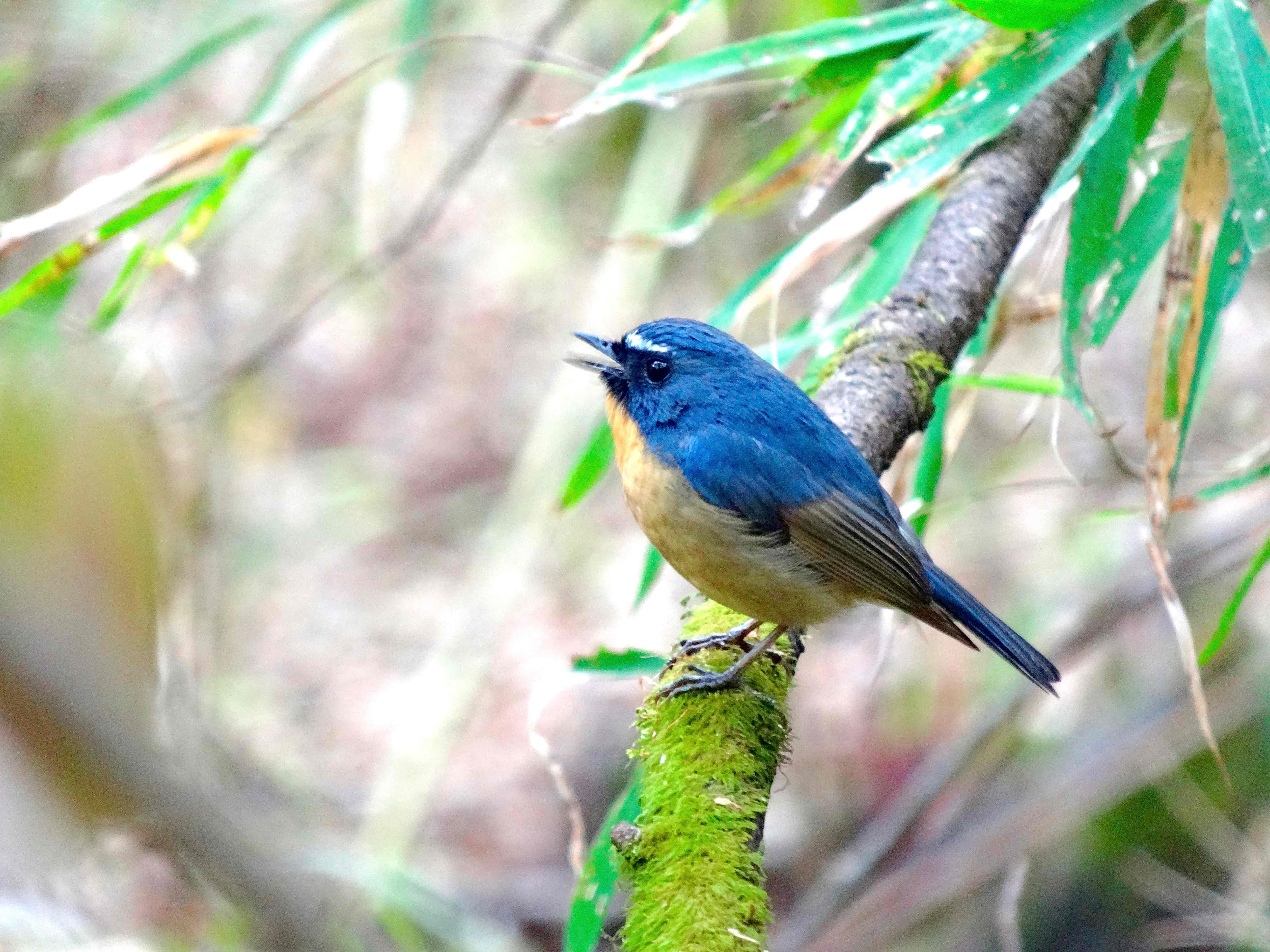 A snowy-browed flycatcher (Ficedula hyperythra), a species present in the Askot Wildlife Sanctuary but not found in the Great Himalayan National Park. Credit: Paul Elsen.

In 2013, Ramnarayan Kalyanaraman and Paul Elsen began a two-year study of 70 Himalayan bird species. They were interested in the distribution patterns of Himalayan birds as well as in exploring the links between where the birds were found and changes in the local temperature, breeding habitat and the presence of competing species along mountain slopes.

Kalyanaraman was with the Himal Prakriti nature trust in Uttarakhand. Elsen was a conservation biologist at Princeton University, New Jersey. Their study was being conducted together with the Wildlife Institute of India (WII).

They found that 50% of the birds studied occurred where they do because of the temperature of the place. In a warming world, this is important information: it means some birds can now be found higher up mountains if the local temperature is warm enough. It also means that some birds may have shifted their nesting places to higher or lower altitudes in the past – and may continue to do so into the future.

Elsen and Kalyanaraman elucidated the link between the presence of birds and the climate as they tallied their sightings with the ambient temperature at which they were spotted. They recorded the temperature using weather stations they had set up every 350 meters (vertically). Their conclusions were also bolstered by testing multiple hypotheses using statistical models – and anecdotes from longtime observers of the area.

For example, WII’s Ramesh Krishnamurthy had seen the great barbet at 1,200 m two decades ago, when he worked at the Great Himalayan National Park (GHNP), Kullu. “They were never found higher than that then.” Finding black francolins at 2,800 m also surprised him for the same reason: “I had seen them at 1,400 m in the late 1990s and early 2000s. They would never go higher. But now the maximum elevation for them has changed to 2,800 meters.”

“Throughout my time in GHNP, I saw several black francolins at elevations as high as 2,800 m, which is hundreds of meters higher than the known elevational range of the species,” Eisen told The Wire. “It’s possible other species have also shifted their ranges upslope, tracking warming temperatures. But without historic data, these trends are uncertain.”

The birds that selected their breeding range based on the prevailing temperature – about 50% of the species in the surveilled area – were not much influenced by competition from other species already in the range. On the other hand, the type of habitat mattered to about 40% of them.

Elsen, his Indian support team and several local assistants spent two summers among selected bird trails of the GHNP and in the Askot Wildlife Sanctuary, Uttarakhand, between altitudes of 2,000 m and 4,050 m. “In each place we observed birds in five trails that ascended entire mountain sides,” Kalyanaraman says. They went twice in the morning and once in the evening – “and walked up and down in an altitudinal band of 350 metres” – and revisited each place after a fortnight.

They recorded the species of birds, their numbers, their behaviour and the altitude. They also measured the temperature and humidity there, above and below. And once every 50 meters along these trails, Elsen and his team also counted and identified all the tree species, since they make up an important part of the birds’ habitats. For instance, the golden bush robin goes up to 4,000 meters during the breeding season and lives among rocks and grass in a terrain where there are hardly any trees, says Kalyanaraman.

“Previous studies from around the world – but not in the Himalayas – have compared historical surveys from the early 1900s to surveys done recently, and have seen birds shifting their ranges, primarily to higher elevations tracking temperatures as they increase up mountainsides,” as Elsen says. “Because we found that about half of the species of the Himalayas are limited by temperature, we would expect that future warming would result in similar shifts in species distributions.”

The Princeton-WII findings are now part of a new study by the National Mission for Sustaining the Himalayan Ecosystem (NMSHES), under India’s environment ministry, according to Krishnamurthy. In turn, the NMSHES is being overseen by the WII, which participated in the study. “The Himalayan mission … is [trying] to make predictions for various species of not only birds but even mammals and aquatic creatures based on different models for global warming that are available.”

The follow-up study is likely to go on for the next five years. “We will know what will happen to the range limits of various species, and which species are most vulnerable.”

The Elsen et al discovery comes even as international efforts are on to restrict the degree of global warming. The Paris Agreement on climate change committed the majority of countries throughout the world to restricting global warming to 2º C above pre-industrial levels, but it also urged countries to try to keep it to 1.5º C.

At the same time, other recent studies have predicted that even if temperatures are restricted to these targets, the world will still experience deadly heat waves more regularly than it currently does.

A study by researchers from UK and Ireland published in the Proceedings of the National Academy of Sciences said this month that even with only 1.5 ºC of global warming, many megacities could become heat stressed, exposing more than 350 million more people to deadly heat by 2050.