The lack of any law to protect groundwater levels is actively hampering any efforts to enable and encourage the natural replenishment of the NCT's water table.

NCT Delhi is one of the country's worst offenders when it comes to dropping groundwater levels. Representative image. Photo: Reuters/Mukesh Gupta/Files 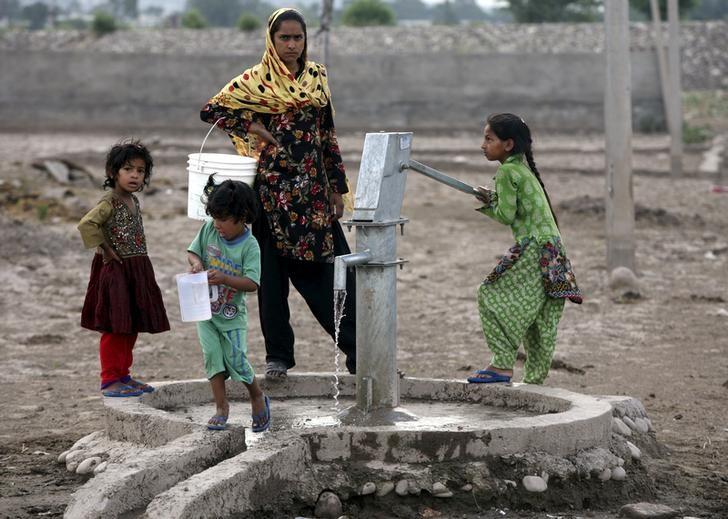 NCT Delhi is one of the country’s worst offenders when it comes to dropping groundwater levels. Representative image credit: Reuters/Mukesh Gupta/Files

Roughly two billion lives worldwide thrive on groundwater resources – a number that is that is on the rise. As the adversities of hydroclimatic aberrations start becoming perceptible in sustainable development strategies around the world and surface waterbodies start falling prey to aggressive human expansions, groundwater is emerging as the mainstay of livelihoods everywhere.

A 2015 study, however, found that the resilience of groundwater reservoirs (aquifers) is being tested like never before, leading to appalling drops in water levels and reductions in storage capacities. According to the study, regions that are over-reliant on groundwater will soon witness unprecedented drought events that might take heavy tolls on lives, lands and revenues.

Treading along the same line, a 2016 report from the Central Ground Water Board (CGWB) revealed that between January 2015 and 2016, water levels dropped in over 64% of monitoring locations in India – a large fraction of which were in the northwestern parts of the country. Additionally, in 67% of all monitoring locations, water levels presently stand significantly below the long-term decadal average of 2005-15.

A 2009 study shows that the rate of groundwater depletion (measured between 2003 and 2008) has been unprecedented in Rajasthan, Punjab, Haryana and Delhi, with the depleted volume roughly amounting to double the total capacity of the nation’s largest freshwater reservoir. Depletion has also entailed a variety of agro-ecologic adversities such as a rise in soil salinity levels, rapid denudation (soil loss), reduction in crop yields, drastic land cover changes, biodiversity losses, etc.

Here, the national capital territory of Delhi (NCT) probably deserves a special mention, not only because it’s the capital of the nation but also because it is among the most rapidly expanding urban agglomerations in the world. And the scenario looks pretty grim. About 49% of the region’s wells have suffered from water-level drops, with about 66% of wells deviating from long-term decadal averages (2006-2015) by about two metres. About 12% of wells deviate from the same by over four metres, indicating major depletion in groundwater levels.

Pumping out groundwater from wells with water-levels below ten metres is a highly resource-intensive – in terms of money, energy, equipment, human resources and time – operation which impacts other aspects of sustainable human development such as irrigation, agriculture, industrial work and a thousand associated activities However, in about 16% of NCT’s wells, water-levels stand below 20m below ground level (mbgl), while in about 8% of wells, the levels are over 40 mbgl. The region is just under Rajasthan, where about 18.5% of wells register beyond 40 mbgl, making NCT the runner-up in the national ranking of water-levels. Over 50% of the wells in NCT Delhi’s south district register below 40 mbgl, while 35-40% of the wells lie in the range of 20-40 mbgl. The shallowest water-levels (2-5 mbgl) occur mainly in the north and northeast districts, like the Yamuna floodplains.

Figuring out the main causes of depletion in the NCT is difficult because multiple processes overlap on various levels of space and time. Of course, climatic anomalies are a decisive factor in the whole process. Recent meteorological assessments reveal that about 30% of India’s landmass falls under the category of receiving ‘deficient’ precipitation, with cumulative rainfall (CR) adding up to 12% less than the long period average (LPA). CR in the northwestern states is under 21% of the LPA. For Delhi, Haryana and Punjab, the latter is barely half the LPA. The crux of the matter is that given current precipitation patterns, the natural replenishment of groundwater in the region seems unlikely.

But other than such supposedly natural factors, human factors such as municipal drafting are key determinants of groundwater availability. Over half the total draft in the region goes towards furnishing domestic needs, while irrigation claims the rest, which amounts to about 42%.

In the central and north districts, and in New Delhi, the entire drafting serves the domestic sector, which accounts for between 50 and 90% in the south, southeast, east and northeast districts. While the western districts predominantly draft water for irrigational purposes, the east district mostly drafts water for industrial uses.

The CGWB has already labelled seven districts in the NCT “overexploited”. There are districts where the rate of groundwater drafting exceeds the rate of natural recharge. The total annual groundwater drafting in the NCT approximates around 389 million cubic meters (MCM) with a net natural recharge of around 281 MCM, giving rise to an overdraft of over 100 MCM.

The contamination of groundwater is not a minor issue in the NCT either. Groundwater wells sampled in over 30% of the NCT area appear to be contaminated with high levels of fluoride. Nitrate appears ubiquitously across the NCT, largely owing to unplanned domestic sewage disposal, unlined drains and urban runoff from innumerable cattle sheds that are littered across the region. There are long-standing issues over high levels of heavy/trace metals and salinity as well. However, over 15% of households in the NCT still rely on hand pumps that draw directly from the highly-polluted shallow alluvium.

A recent report from the Ministry of Environment, Forestry and Climate Change revealed that over 29% of India’s landmass is presently undergoing desertification – a phenomena that the UN labels a major challenge to meeting the Sustainable Development Goals. Comparative evaluation between 2003-05 and 2011-13 reveals a clearly increasing trend in desertification or land degradation across the nation, especially in the northwestern states. It appears that about 60% of NCT is facing severe desertification, which might translate into serious water shortages.

Another potential factor for groundwater depletion could be the incessant migrant influx from neighbouring states. A vast majority of this migrant pool is made up of agricultural labourers who can be tagged as ‘environmental migrants’: an emerging category of migrants moving across geopolitical units due to water resource depletion, agricultural losses, land degradation and desertification. The growing environment migrant population in the NCT, however, is leading to increasing demand for freshwater and other natural resources.

Briefly, the water-sector in the NCT lays out like this: the Upper Yamuna Accord will be over by 2025 and its renewal seems unlikely, keeping in mind the growing demands of neighbouring states. With population growth, internal water demand in the NCT has already soared to impossible heights. Softer surfaces are being fast replaced by impervious covers, barring natural recharge from taking place. Between 1999 and 2012, the built-up area in the NCT increased by over 9%, with significant reduction in wetlands/water bodies to accompany it. Over half the region is now urbanised, with an additional 1000 square km awaiting a similar fate by 2021, according to the Master Plan. Except for the north district, wetlands constitute less than 3% of the NCT’s geographical area, which reduces the potential of natural recharge.

Presently, the Delhi Development Authority, Central Water Commission, CGWB, Central Pollution Control Board and other organisations are trying their best to augment groundwater availability in the NCT. But there’s still no targeted and strictly enforceable law to regulate groundwater drafting in the NCT (or in India as a whole), which is hampering the whole effort. Artificial recharge initiatives have been proposed to enhance groundwater storage capacity for the leaner years. But again, there’s no exclusive law to prioritise and protect these sensitive areas in the face of prograding urbanisation. Overall, the need for devising and implementing specific spatially-optimised stringent policy reforms for the NCT has never been as compelling as it is now.

Sriroop Chaudhuri is an assistant professor and assistant director at the Centre for Environment and Sustainable Human Development (CESH) at  O.P. Jindal Global University. Harnoor Kaur is a student researcher at CESH.