The balance that needs to be achieved is one of longstanding domestic priorities: between poverty alleviation, food security and sustainable development. 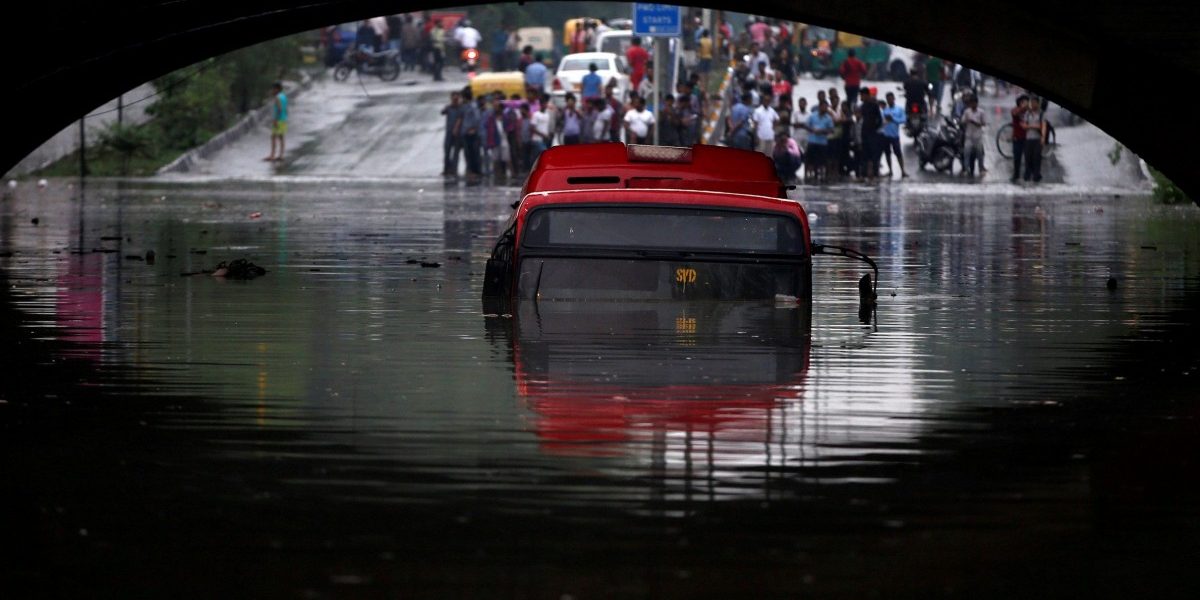 A bus is seen submerged on a flooded road under a railway bridge after heavy rains in New Delhi. Credit: Reuters

The 2018 Environmental Performance Indicators and the 2018 Global Climate Risk Index together make a distressing argument: that India’s ‘environmental performance’ is the third worst among 180 countries even as it is the 14th most vulnerable to the effects of climate change.

Many of these effects have already assailed different parts of the country, including heavy rains, floods and intense tropical cyclones, more hot and dry days and longer periods of low productivity, coastal flooding, etc. In turn, they have heightened the risk of certain problems in India, such as of vector-borne diseases, crop failures, food shortage, lower nutritional quality, and further endangered threatened the health and livelihoods coastal communities and ecosystems.

States that are further inland have shown up to be the most vulnerable. Chhattisgarh and Madhya Pradesh, both with large tribal populations and both thought to have experienced a living-standards decline of over 9%, are the two most vulnerable, followed by Rajasthan, Uttar Pradesh and Maharashtra.

The World Bank suggested in a 2015 report that climate change would push 45 million Indians below the line of extreme poverty by 2030, most via its effects on agriculture and health. Over the last 20 years, India has lost an estimated Rs 5.6 lakh crore to climate-related disasters – the fifth-highest in the world.

India’s pre-monsoon season, from March to May, saw 11% less rainfall in 2018 than the average – the third year in a row it has been like this. On the other hand, Kerala experienced its worst flood since 1924 last year, and incurred a bigger bill of losses than all of India had in 2017.

Evidently, climate change is expensive to the Indian growth story, although this shouldn’t be surprising because 60% of our agriculture is still rain-fed and 15% of our groundwater resources are depleted. In effect, climate change is now accepted as the most profound existential threat to India.

In this scenario, it is important to understand the different ways in which different groups of Indians are vulnerable to disaster and evaluate their relative threat levels.

An individual’s vulnerability to disaster is her ability to anticipate, cope with, resist and recover from the impact of a natural hazard. The United Nations Office for Disaster Risk Reduction says that “vulnerability to risk, and degrees of suffering, are determined by levels of economic development, rather than simple exposure to natural hazards per se”.

Also read: Aside From Battling Climate Change, We’re Not Doing Enough to Adapt to It

While absolute economic loss may usually be higher in high-income areas, it is the poor who are expected to lose a bigger portion of their assets and income. This is chiefly because socioeconomic conditions prompt communities to hold wealth in different types of assets. And during disasters, land, currency, jewellery, housing and livestock are at greater risk of damage.

Over 363 million people live under the poverty line in India and carry the greatest climate risk. When exposed to natural calamities, they are believed to be seven-times more likely to lose their life, and six-times as likely to be injured or displaced, than those in high-income communities.

Together with the fact that extreme weather events cost India up to Rs 71,495 crore – of which 80% is uninsured – climate change is expected to further widen the income inequality gap, especially in coastal regions, even as the country is part of the second most unequal region in the world (after the Middle East).

With a Climate Risk Index score of 12.67 (in 2013), and climbing, it is time for India to set a clear climate change agenda. While we will still need to augment financial and technological support for climate action, we also need to mobilise domestic finance for mitigation and adaptation. The balance that needs to be achieved is one of longstanding domestic priorities: between poverty alleviation, food security and sustainable development.

Neha Simlai is an international consultant working on environmental sustainability and conservation themes across South Asia.