Is the Endgame Inevitable for the Ganges River Dolphin in Assam's Barak River?

Making a plea for conservation, researchers have detailed in a study how the endangered Ganges river dolphin is heading towards 'local extinction' in the Barak river system of Assam. 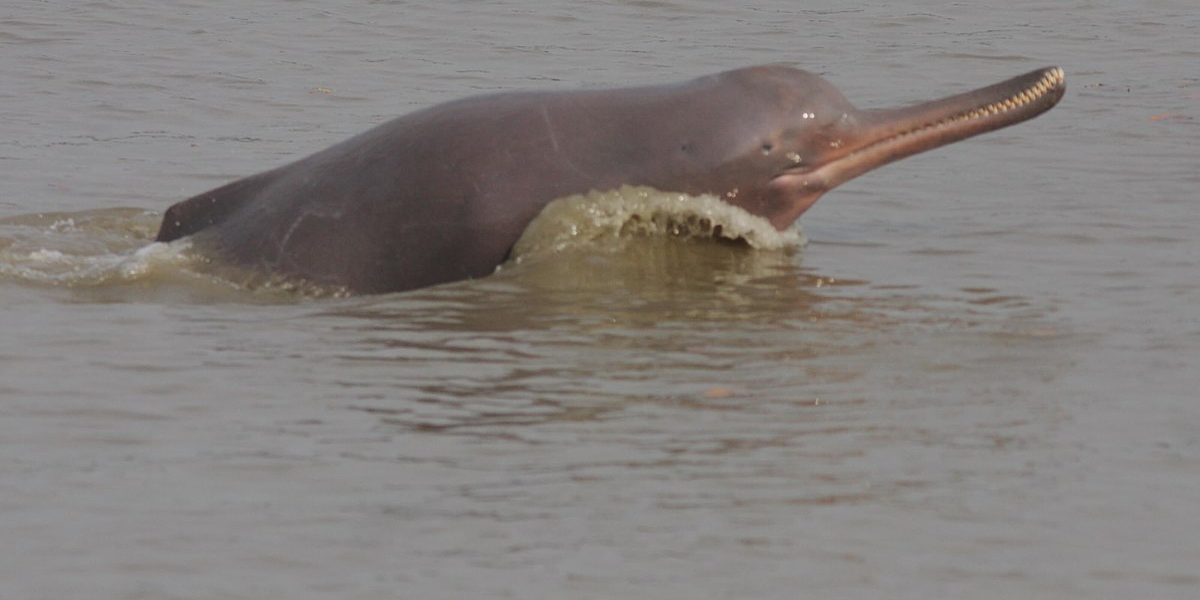 The proposed Tipaimukh dam on the Barak river in northeast India – a controversial political issue between India and Bangladesh – could be the last nail in the coffin for the elusive Ganges river dolphin in Assam’s Barak river system, researchers warn.

They assert that despite the contention on the issue of the dam, the two neighbours could collaborate to bring back the dolphins from the verge of local extinction.

The endangered subspecies (Platanista gangetica gangetica) inhabits the Ganges-Brahmaputra-Meghna (GBM) river basin of India, Nepal and Bangladesh and the disjunct Karnaphuli-Sangu river basin of Bangladesh, with 80 percent of the dolphin’s territory falling within India’s borders.

Less than 4000 Ganges river dolphins are estimated to survive in the waters of India, Bangladesh and Nepal, as per actual sightings.

Making a plea for conservation, researchers from Assam have warned in a study that the endangered Ganges river dolphin, India’s national aquatic animal is heading towards “local extinction” in the Barak river system of the state.

“Factors like poaching (for oil and meat) and accidental mortalities in fishing gears, gradual habitat degradation by sluice gates, embankments, disturbances like motor boats, and aquatic pollution have resulted in the extirpation of the resident dolphin population from the Barak river system of Assam,” M.K. Mazumder, corresponding author of the study, told Mongabay-India.

The paper underscores that though the dolphin has been extirpated from the tributaries of the Barak river, and currently no longer occurs in any part of the main channel as well, it still appears in the downstream Kushiyara river (a distributary of the Barak river along India-Bangladesh border).

This suggests a decline in the upstream distribution range by around 135 km but their presence in downstream Kushiyara river offers a glimmer of hope for reviving Barak’s population.

“We need to understand they are a migratory species. Although the resident population of Barak has been extirpated, there is a possibility that individuals may reinhabit Barak by migrating from Kushiyara, Therefore, we say they are heading towards extinction,” Mazumder said.

“If their limit of distribution decreases further downstream in Kushiyara, say due to the proposed dam, or population in Kushiyara loses the viable number, this hope will be no more,” Mazumder lamented. 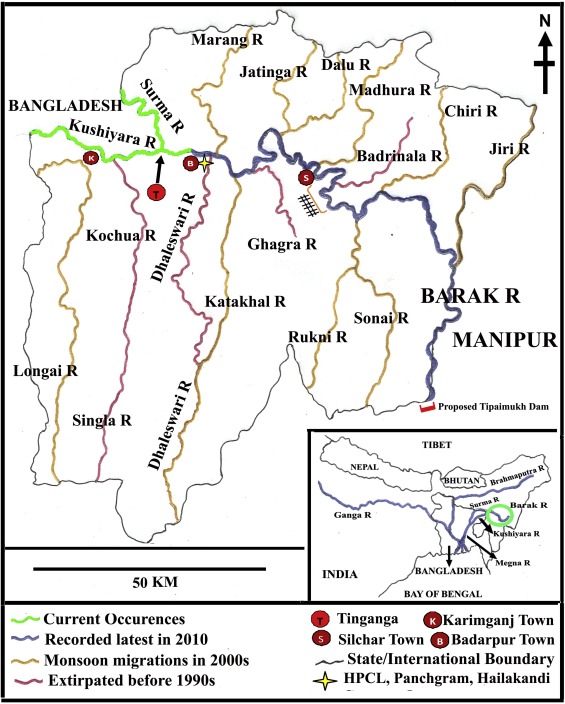 Status of the Ganges river dolphin in Barak in Assam. Credit: Map from study

The Barak river is an integral part of the GBM river basin. Originating in the Indian state of Manipur, the river traverses a hill course in the state before entering the plains of southern Assam (India) lending this geographical realm the name of Barak valley.

The river forks off at the India-Bangladesh border (at Tinganga in Assam, India) into the distributaries Surma and Kushiyara, both of which eventually rejoin in Bangladesh, and the joint stream is known by the names Kalni, upper Meghna and lower Meghna.

“The last dolphin sighted in the Barak river was in September 2015 when a single individual migrated upstream from the Kushiyara river (on India-Bangladesh border). The individual was poached,” remarked Mazumder.

Their revival in Barak also hinges on co-operation between the two neighbours for conservation despite their differences over the dam.

“First, a joint population census of the species in the border region could be undertaken. Second, we also need joint awareness programmes on either side of the Kushiyara river/border. In addition, joint prohibition and vigil on poaching, excessive fishing among others could be introduced,” explained Mazumder.

He added that rapid dissemination of information on the status, distribution, movement/migration, poaching of the Ganges river dolphin between the nations would also be needed. “Since the species comes under Convention on Migratory Species (CMS), the two nations should jointly form conservation action plans, with frequent reviews and discussions and sharing of information,” Mazumder said.

As an environmental treaty under the aegis of the United Nations Environment Programme, CMS provides a global platform for the conservation and sustainable use of migratory animals and their habitats.

“Today, we are still hopeful that the species may re-inhabit the Barak from the downstream rivers along India-Bangladesh border and rivers of Bangladesh. If the dam is built, the water flow will decrease to the point that the river will not remain habitable for the dolphin. The dam would also wipe out other aquatic fauna like fish and algae,” he said.

The site of the protest-hit and much-delayed 1500 MW Tipaimukh Multipurpose Hydroelectric Project, on the Barak river is along Manipur’s border with Assam’s Cachar district, just a kilometre north of Bangladesh’s north-eastern limits.

Mazumder and co-authors have batted for proper Environmental Impact Assessments to be conducted before the dam’s construction. “Further, if ever built, it is essential that the dam should not alter the ecological flow of the river, and needs to be of run-of-river type,” the authors write in the study.

“Proper EIA needs to conducted considering the dolphin, other aquatic species, the riparian people, and the upstream areas which would be submerged,” he said. 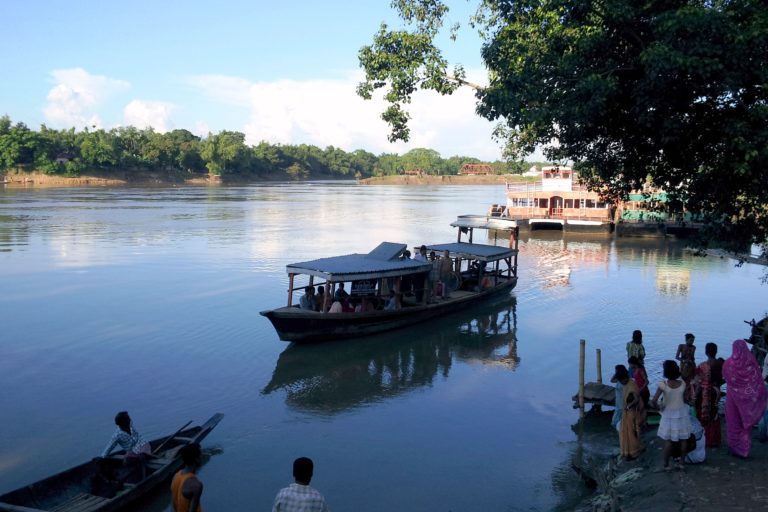 Motorboats on the Barak river in Assam. Credit: Konwar.anupam/Wikimedia Commons

Experts have argued that the dam, when completed, would cause colossal disasters to Bangladesh and India, with the former being vastly affected: the dam would virtually dry up the Surma and Kushiara, two important rivers for Bangladesh.

According to India’s Ministry of Power, although the Central Electricity Authority accorded techno-economic concurrence for the project, forest clearance (22,777.50 hectares in Manipur and 1,551.60 hectares of forest land in Mizoram) was declined in 2013 in the two states.

Activist Jiten Yumnam of the Centre for Research and Advocacy Manipur that has called for the scrapping of failed dams, rued the EIA for Tipaimukh dam has completely negated impacts on floral and faunal diversity and the endemic nature of such species in Manipur which lies right in the middle of the Indo-Burma Biodiversity Hotspot and the Eastern Himalaya Hotspot.

“Other than the direct impacts on the environment, people, the process of decision making on Tipaimukh dam is also highly problematic and failed to recognise and respect the voices of concerns on hydropower projects in Manipur,” Yumnam told Mongabay-India referring to the Loktak Hydroelectric Project that submerged more than 50,000 acres of agriculture land in Loktak wetlands.

The Tipaimukh dam building process also failed to recognise affected peoples rights and their dependence on the forest, Barak river and also on the agriculture land along the river, he said.

The beginning of the end?

Groaning under the weight of flood-control infrastructure (more than 30 sluice gates and 800 km of embankments in the interconnected rivers, channels and wetlands), the Barak river system has witnessed a two-fold jump in human population between 1971 and 2011. Just as in the Ganga and other river systems, these structures block migration of fish in the Barak, contributing to a decline in prey abundance for the dolphin, a slow breeder.

Sluice gates also reduce water flow and squeeze dolphin habitats and foraging grounds.“The preferred habitats of the dolphins are also the same for fishermen, both seeking the same fish because most of the riparian people of the Barak valley are largely dependent on the rivers for their livelihood, and fishing is one of their primary sources of income,” said Mazumder.

The double whammy of a decrease in fish abundance and human population explosion triggered a shift in fishing tactics, and the application of gill nets became popular since the 1970s. Even at this time, between 1970 and 1980, the dolphin used to be fairly common in the Barak river and its larger tributaries throughout the year.

Also read: How Irrigation And Fishing Pushed Dolphins In Nepal Into An Ecological Trap

During high floods, it would migrate to tributaries and wetlands connected with the river system.“However, the population of the dolphin declined gradually since then, although no systematic survey was conducted until 1999,” the study noted.

Referring to data recorded by Cachar College’s Th. Pawlen Singha and colleagues, the study highlighted that dolphin counts declined from 14 in 1999 to eight in 2008 across seven surveys conducted in the 135 km stretch of the Barak river during the dry winter months.

Even in and around known congregation sites (such as the river U-bends), the dolphins became hard to come by. 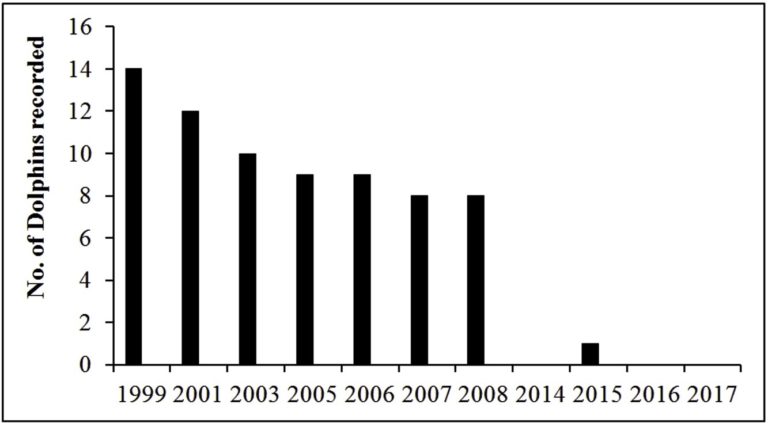 Status of the Ganges river dolphin in Barak in Assam. Credit: Graph from study

The Barak river changes its course very often and leaves behind U-shaped meanderings (dahrs) as ox-bow lakes, which were frequented by the subspecies besides the floodplain wetlands. They were well connected with the rivers in the rainy season.

Although the dolphin is solitary in nature, schools of a few individuals (up to eight in number) would flock to meandering U-bends and river confluences in dry winter months.

At dahrs as well as river confluences, the presence of the counter-current disorients fish, thereby making them easy prey for the dolphin, according to the study.

Since 2013, Mazumder and colleagues have been surveying the Barak river system covering the entire length of 135 km during the dry winter season (November-February), with frequent visits in other seasons as well.

In dry months, the surveys were performed using foot-transects (along river banks), country boats and occasionally motorboats, and involved frequent interactions with the locals. During monsoon months (March-October), the surveys were chiefly focused on interviews with riparian people, fishermen, ferry owners and forest officials.

Unfortunately, there has been no record or sighting of the dolphin by us or interviewees, neither in the tributaries nor in the Barak river main channel, except one individual in 2015, said Mazumder.

Will the Ganges river dolphin meet the same fate as gharial and marsh crocodiles of Barak?

Abuzz with motorboats, which were introduced for transportation in the 1980s in the Barak river, these vessels are now used for sand mining and fishing as well. With the Indian government of India declaring all its major rivers as National Waterways, including the Barak, researchers apprehend more damage to the ecology of the rivers.

“In this regard, dredging operations have already been started in the Barak river since November 2017, to make the river navigable,” the researchers said. Dolphins are particularly vulnerable to this since they are largely dependent on the bottom fauna that would be wiped out by dredging.

Drawing parallels, the researchers also pointed to the fact that in China’s Yangtze river, large scale waterway development and associated dredging operations, in addition to poaching and damming were among the primary contributors to the extinction of the Chinese river dolphin.

Against the backdrop of these threats, the researchers recommend proper EIA of the dredging operation and other developmental activities in the region.

To maintain prey abundance, the link between the floodplain wetlands, ox-bow lakes and other water bodies with the rivers of the Barak river system should be re-established, at least during spawning season.

“The other aquatic mega-fauna of the Barak river which became extinct in the second half of the last century are gharial (Gavialis gangeticus) and marsh crocodile (Crocodylus palustris), and then the GRD follows in 2015. There is an urgent need that the dolphin and its habitat be provided with protection. Conservation efforts, as suggested, should be initiated immediately which may facilitate re-stocking of the dolphins in the Barak river from the downstream,” the authors urge.