Mistaken Beliefs About Rivers' 'Excess' Water Has Diminished the Ganga

Over 85% of India's rivers are free-flowing, according to a new study, but damage to the other 15% has dire consequences for the whole country. 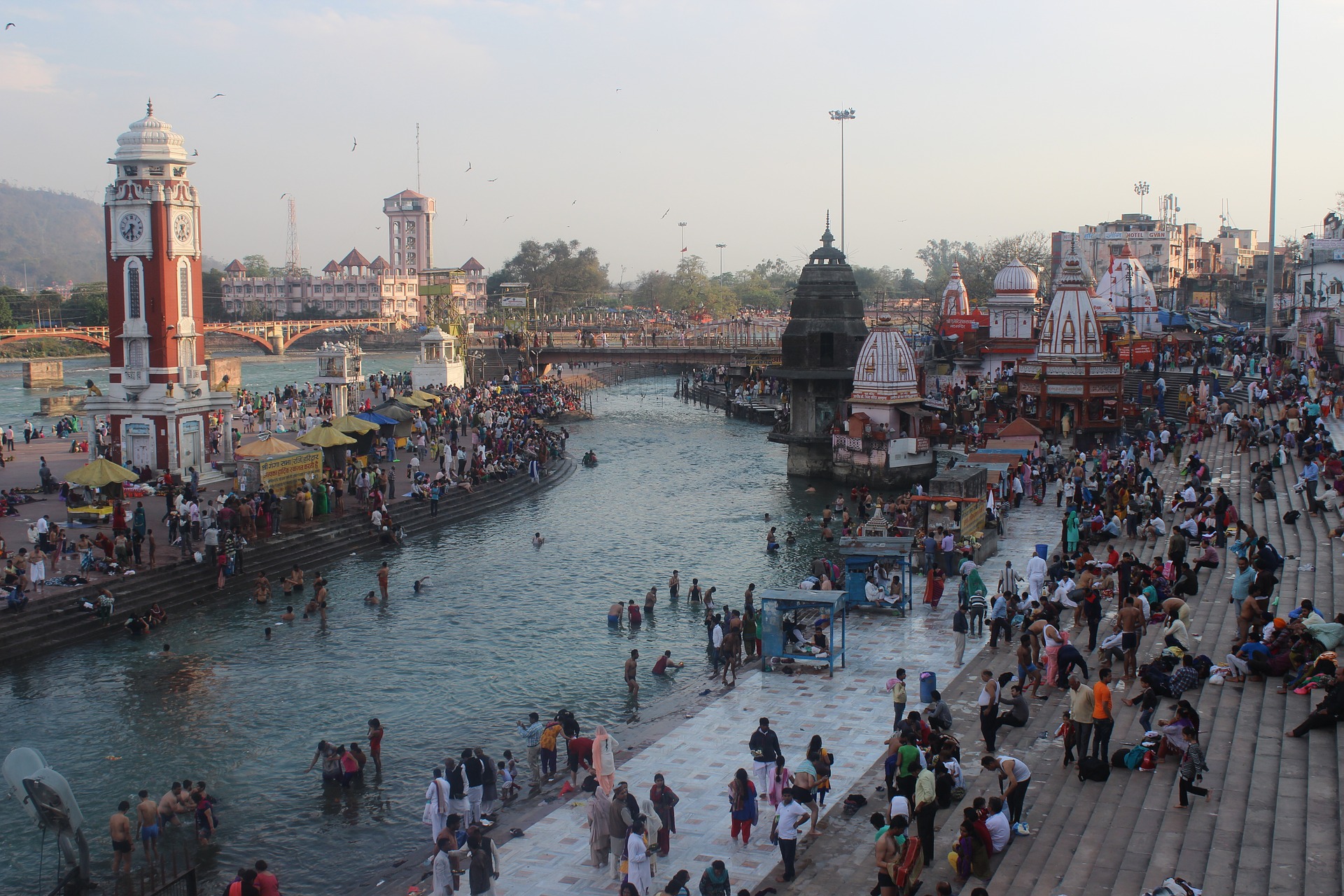 The Ganga is one of the longest rivers in the world. And like most long rivers, it does not flow freely.

Only 37% of rivers longer than a thousand kilometres maintain their natural flow, according to a recent study by an international team of researchers. This is a matter of concern because rivers perform various functions along their path. For example, the Ganga carries soil particles rich in minerals from the Himalaya to mangroves near the Bay of Bengal. It also transports carbon sequestered over millions of years from the mountains to the sea, where it is buried under sediments.

Along the way, it recharges groundwater aquifers and supports unique wildlife: river dolphins, otters, gharial and more than 143 species of fish species, Jagdish Krishnaswamy, an ecohydrologist at the Ashoka Trust for Research in Ecology and the Environment (ATREE), Bengaluru, told The Wire.

But now, there are more than 900 dams on the Ganga, and roads fragment the river at several points. The sacred water body has now become a convenient dumping ground for sludge and sewage from cities. All these actions threaten the river’s flow.

Also read: How Dams Deprive the World’s Rivers of Sediment

This isn’t the Ganga’s story alone. As most Indian rivers flow from their sources to their mouths, their water is diverted into canals, funnelled into dams and trapped in reservoirs. The usual excuse is that the water flowing unused into the sea is surplus water. “But that so-called excess (water) serves a function,” Krishnaswamy said.

Blocking a river upstream affects migrating fish, many of which have different spawning and rearing grounds. The blockage also hinders the transport of sediments, essential for maintaining productive deltas, fertile floodplains and coastal wetlands. Indeed, rivers with less sediment erode the riverbed downstream, thus lowering the water-table in the surrounding area. This affects natural vegetation and the livelihoods of people that depend on groundwater.

Human interventions like buildings on floodplains and roads across rivers also affect connectivity. However, the teams that assess the cumulative environmental impact of upcoming projects often neglect these. Instead, they choose to focus “too much on the river condition immediately at the site of the dam or the barrier, and disregard environmental effects further away, including many kilometres downstream or laterally,” Günther Grill, a scientist McGill University, Canada, told The Wire. Grill is one of the members of the study.

Now, Grill and his peers from 15 countries have combined different types of connectivity into one unified index – a single number whose values can give researchers a sense of how well the river is connected. In their peer-reviewed paper, they call it the connectivity status index (CSI). CSI is a percentage score based on five pressure factors in and around a river basin.

Also read: How to Revive a River and Manage a Landfill

The new method employs satellite images to map the precise location of a barrier – a road or a dam – on the global river network. Using statistical models, the scientists then calculate the CSIs for all rivers and assess how each pressure factor alters the river’s connectivity.

A lower CSI, say about 30%, means the river is more regulated than a river with a CSI of 60%. But the scientists have also determined a cut-off: only those rivers with a CSI in excess of 95% are to be considered free-flowing. And in cases where the CSI is less than 95%, the scientists have also determined how different factors affect connectivity across a few kilometres at a time.

“The approach is novel and enables the assessment of river reaches less than one kilometre long to rivers longer than a thousand kilometres,” T.V. Ramachandra, a scientist at the Centre for Ecological Sciences at the Indian Institute of Science, Bengaluru, told The Wire. Ramachandra was not involved in the study.

Some stretches of a river are populated by endangered species and are thus more critical than others. Tampering with them could have a greater environmental impact. For example, diverting the Ganga’s water into canals has reduced its flow in the middle stretch, between Haridwar and Varanasi, affecting gharial, mugger crocodiles and turtles living in these waters. Scientists can now use CSI to help plan and implement projects along river basins while making allowances for such locations.

Very long rivers like the Ganga support several tributaries along their length. Lower water flow reduces subsidiary rivers to a trickle, affecting people that depend on the water from these rivers as well as threatening unique ecosystems that the river props up.

“The value of ecosystem goods and services across estuaries with upstream dams is often lower compared to the estuaries fed with free flow rivers,” Ramachandra said. “At the Sharavathi river in North Karnataka, fishermen now have to cover 130 hectares to get the same amount of catch that they use to get from 10 hectares.” The Sharavati is not a free-flowing river: in some stretches, Its CSI dips below 35%. More than 50 million people in India depend on fisheries to make a living. Roughly 1.35 billion people depend on groundwater for irrigation and daily water needs.

“The study could shine a light on the dire plight of rivers in India,” Krishnaswamy of ATREE told The Wire.

However, he also says there is a flaw in the study design.

In the Indian subcontinent, some major rivers are regulated more by barrages than by dams. And some key barrages don’t feature in the analysis.

For example, according to Krishnaswamy, the Gandak in Bihar and Uttar Pradesh is completely regulated by a barrage and appears to be free-flowing in the CSI paper. The same goes for the Koshi on the India-Nepal border. Barrages are usually smaller than dams; they help control the river’s flow and channel some water into canals. But unlike dams, they are not linked to hydroelectric projects and allow sediments to move through their gates when they are open.

The authors of the paper have included some large barrages, like the Farakka on the Ganga, but they have neglected many smaller ones. This overestimates the connectivity of those rivers in South Asia, Krishnaswamy said.

One reason for this apparent lacuna could be that there isn’t any public data on India’s barrages. That said, Krishnaswamy says Indian researchers step in to plug this cap, and calculate rivers’ CSIs using local data on both dams and barrages.

“The CSI index and also the number of free-flowing rivers will likely reduce in India if more barrages (and small dams) were to be included,” Grill said.

Another caveat is that Grill et al’s calculations were – including for the 10,000+ rivers in India – based on simulations. So they still need more data and long term studies to validate and improve their index. Pursuant to this, they selected a few rivers from around the world and, with the help of the relevant local data, fine-tuned CSI so it matched better with ground realities. For example, in India, they selected the upper Ganga and determined the CSI of its upper reaches to be 50-65 %.

The government has been attempting to rehabilitate the Ganga with a special action plan that has, thus far, yielded no meaningful results. “River fragmentation and flow regulation by dams was the major factor affecting river connectivity in India,” Grill said. “Water consumption, mainly from irrigation, was also a very important factor.”

The study also shows that dams are and have been the major cause of river fragmentation throughout the world. “I hope the current decision-makers take the outcome of this collaborative research [seriously] while trying to rejuvenate the Ganga, spending crores of public money,” Ramachandra said.