Since independence, floods in Bihar have affected 2.24 million hectares of agricultural land in all, and precipitated losses worth Rs 768.38 crore between 1953 and 2017. 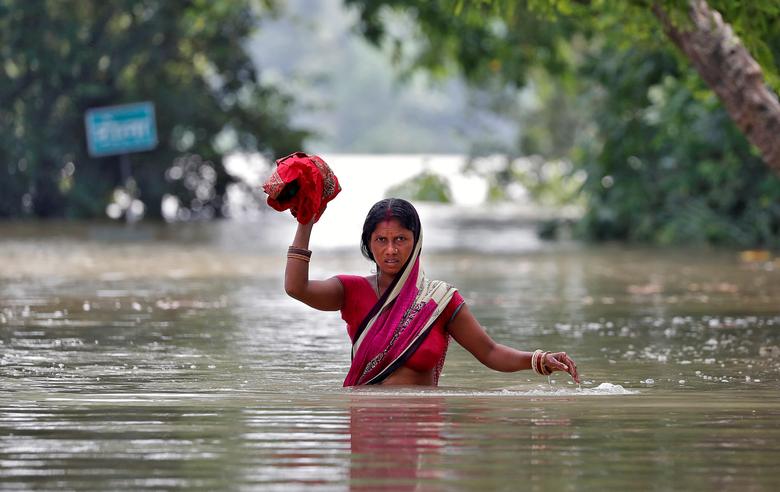 These numbers were obtained from answers provided by the Centre in response to questions posed by MPs in the Lok Sabha between 2019 and 2020.

The districts most affected by the floods this year were Sitamarhi, Darbhanga, Muzaffarpur, East Champaran, Samastipur and Saran. They had been facing flood-threats due to surging water levels in the Gandak, Boorhi Gandak, Bagmati, Lakhandei rivers, as well as the Adhwara group of rivers. The pressure from floods also destroyed half a dozen embankments along the Gandak and Boorhi Gandak rivers.

The annual floods typically affect large swathes of north Bihar, through which more than three dozen rivers. Most of them originated in Nepal.

Since 1947, the government has laid a lot of emphasis on building embankments to protect against floods. But today, the total length of embankments on both sides of major rivers exceeds the length of those rivers in the state. According to data from the Water Resources Department, a total of 3,790 km of embankment have so far been constructed on 13 rivers in Bihar – Ganga, Kosi-Adhwara, Boorhi Gandak, Kiul Harohar, Punpun, Mahananda, Son, Bagmati, Kamla Balan, Gandak, Ghaghara and Chandan. According to a report of the Second Bihar State Irrigation Commission, 350 km of embankments were built in the last three decades.

Moreover, there are also 374 Zamindari and Maharaji Dams in Bihar, built by landlords and villagers to protect villages against floods. In 2013, the State Minor Dam Policy was formulated, under which the Water Resources Department was afforded the ownership as well as entrusted with the responsibility of maintaining these dams (since categorised as minor dams).

Responding to a question posed by MP Karti P. Chidambaram on September 20, 2020, the Minister of Agriculture and Farmers’ Welfare Narendra Singh Tomar described crop areas affected by floods, landslides and cloudbursts in the last three years (2018 to 2020). He claimed 17.09 lakh hectares of agricultural area had been damaged in 28 states in 2018. However, this data did not include the flood-affected parts of Bihar. In 2019, around 11.43 million hectares of crop land was affected across the country – which included 2.6 million hectares in Bihar.

Tomar also said around 7.5 lakh hectares cultivation area had been destroyed in Bihar this year.

On September 17, 2020, in response to a question from MP Ashok Kumar Rawat about the damage caused by floods, Minister of State for Jal Shakti and Social Justice and Empowerment Rattan Lal Kataria said 8.823 million in Bihar were affected by floods in 2016 and 4.1 lakh hectares of crop-land, worth Rs 443.53 crore, was damaged. Over 16,700 houses also incurred damages, worth Rs 44.26 crore, while 254 people and 246 livestock died. The loss of public facilities amounted to Rs 40.97 crore. The total damage was estimated to be worth Rs 528.76 crore.

In 2017, the floods reportedly affected 1.71 crore people in Bihar and wreaked havoc over some 82,000 hectares. The waters also damaged 1.18 lakh houses and killed 514 people and 373 livestock. The total estimate of the damage is not available for the year, however. 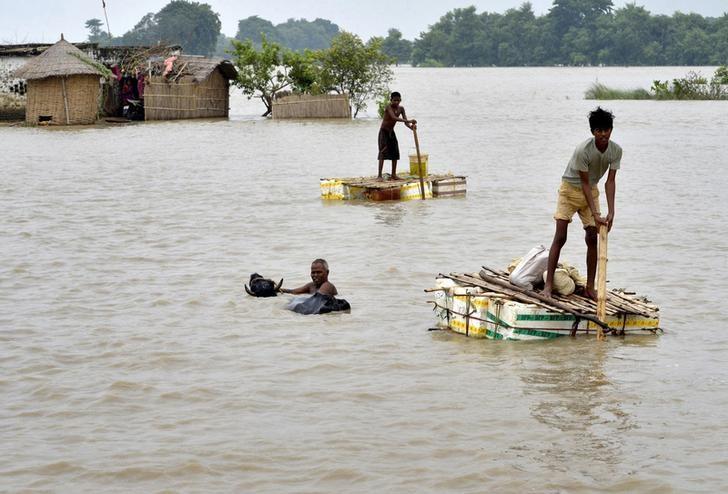 Flood-affected villagers use temporary rafts as they navigate through the floodwaters of river Ganges and move to safer grounds, after heavy rains at Patna district in Bihar August 29, 2013. Photo: Reuters/Krishna Murari Kishan/Files

In 2018, the loss of crops, houses and public facilities amounted to Rs 5.56 crore. An area of ​​34,000 hectares, with a population of 0.15 million, was affected. A thousand hectares of agricultural land worth Rs 5.13 crore was ruined; 1,074 houses were damaged. But only one fatality was reported that year. The loss of public amenities was also minimal. According to government records, the loss was estimated to be worth Rs 1 lakh.

Answering an unstarred question posed by MPs Vinayak Bhaurao Raut, Shrirang Appa Barne, Hemant Patil and D.N.V. Senthilkumar on November 19, 2019, Minister of State for Home Affairs Nityanand Rai said that floods, landslides and hydrological hazards had contributed to the deaths of 989 people and 9,804 livestock in eight states in 2019. A total of 494,284 houses and 54.8 lakh hectares of agricultural area had been damaged. The floods in Bihar specifically killed 113 people and 80 cattle, while damaging 45,355 houses and 2.61 lakh hectares of cultivated area.

In response to a question by MP Rampreet Mandal on June 27, 2019, Kataria had said that Uttar Pradesh, Bihar and West Bengal are regularly affected by floods in rivers originating from Nepal.

Watch: ‘Bihar Floods a Political Disaster Not a Natural One’

On July 11, 2019, Katari reportedly claimed while answering a question posed by MP Badruddin Ajmal that the National Flood Commission had estimated the possibility of flooding over a total area of 40 million hectares across the country.

He said that according to the Working Group on Flood Management and Region Specific Issues for the XII Plan, the maximum flood affected area between 1953 and 2010 was 4 crore hectares of which the largest chunk – about 50 lakh hectares – lies in Bihar.