The disappearance of around 96 fishermen has forced the locals to initiate their own rescue operations. 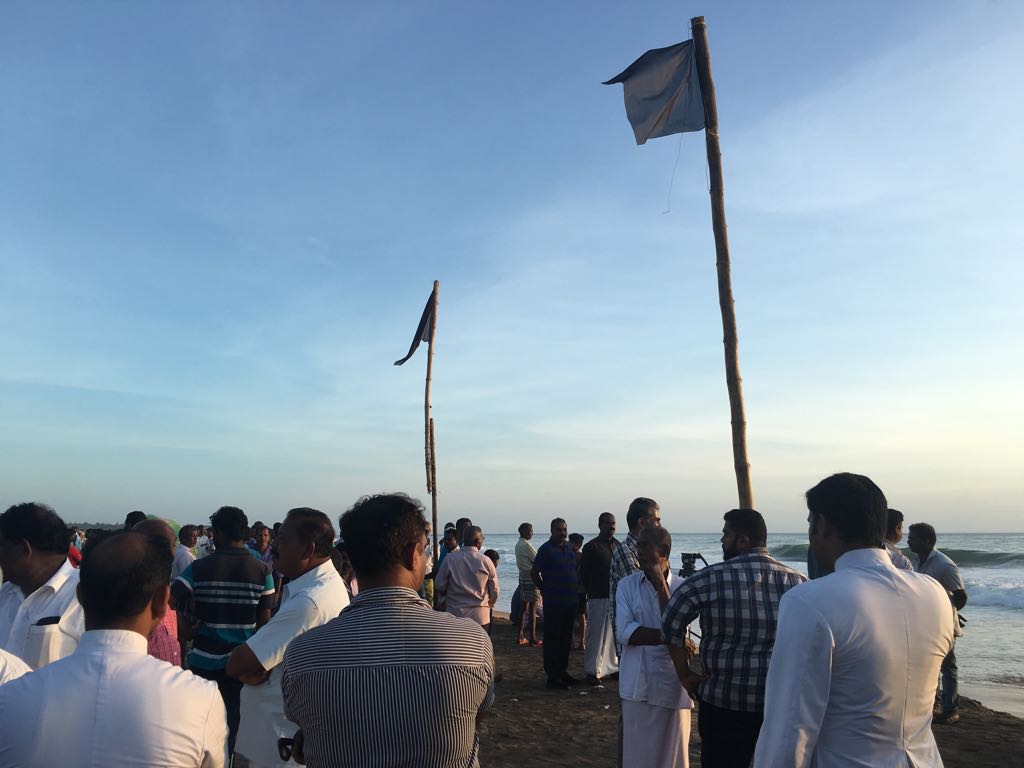 Fishermen waiting for the rescue boats to return on Dec 3 at Poonthura beach in Thiruvananthapuram.

Forty-five year old Sebastia M. who belongs to the fishermen community of the coastal village of Poonthura in Thiruvananthapuram is furious. She has been waiting for the rescue boats to return, and claims that neither depression nor cyclone alerts were issued by government authorities.

Irked by the ‘technical snag’ that occurred in alerting the fishermen, Sebastian claims that the men would have not gone fishing if they were alerted about the danger.

“We would not have lost our brothers. One of the families in the village has lost 14 members,” Sebastia said. “Who should be held responsible for this callous attitude? They failed to alert us, which is why we lost our men,” she added.

Cyclone Ockhi wreaked havoc on the southern coastal districts of Kerala and Tamil Nadu last Thursday. Twenty-five lives have been lost so far, according to the Kerala state government.

Another 96 fishermen who had gone fishing without any knowledge of the arriving cyclone are still missing, according to the government. Their disappearance has forced local fishermen to initiate their own rescue operations.

“We heard that those involved in the official rescue mission are reluctant in bringing back bodies. So our men have volunteered to go deep into the sea,” Jalaja S., another woman in the locality, told The Wire. “If the government had told us about the danger in time, so many deaths would not have taken place,” Jalaja added.

Meanwhile, Indian Meteorological Department (IMD) Thiruvananthapuram director S. Sudevan said that they had issued clear warnings on November 29 and 30 to the departments concerned. “Our warnings were clear. We said that there is a depression and it is intensifying. Our warnings also warned fishermen to not venture into the sea for the next 48 hours. The warning was issued on November 29 from 12 pm every three hours periodically,” Sudevan said.

Sudevan added that at 2 am and 5:30 am on November 30, his office issued an alert saying that the depression had become deep and was expected to intensify further. “The warnings had clear mentions about wind speed and wave heights,” Sudevan said, adding that the warnings were not given only to one single entity, but to all.

The IMD’s November 23-30 weekly update and the 10 am bulletin on November 20, both available in the public domain, clearly stated Cyclone Ockhi’s strength and path.

Fishermen waiting for the rescue boats to return on December 3 at Poonthura beach in Thiruvananthapuram. Credit: Rejimon K.

According to Sebastia and her friends, 30 fishermen who had gone fishing last Thursday from the Poonthura village are still missing.

However, the state government and its disaster management body have said that they received a cyclone alert on Thursday afternoon and acted immediately after. On December 1, Kerala chief minister Pinarayi Vijayan dismissed the allegation that the government had failed to take effective steps to tackle the situation, terming it as a misunderstanding about the issue. He said the state received the cyclone warning on Thursday at noon.

Prior to that, there was no cyclone alert, though the general information about the weather was available. He said that as far as the state government was concerned, it could initiate emergency action only on the basis of the cyclone warning. He added that there was no delay on the part of the government to send relief to the victims.

An official from the State Disaster Management Authority (SDMA), which is chaired by Vijayan, also echoed the same opinion. He said that they issue a warning only when a depression turns into a cyclone.

“The deep depression was confirmed as a cyclone only by Thursday afternoon. We issued the warning without any delay,” the official added. Additionally, a press note issued by the SDMA said that the routine alerts on strong winds and high waves issued by the IMD and the Indian National Centre for Ocean Information Services (INCOIS) could not be taken for a disaster situation.

“Our standard operating procedure lays down clear guidelines on when to declare an emergency. This is to avoid creating false alarms that could lull vulnerable communities into complacency,” the press note said.

An alert issued by INCOIS on November 29 reads that high waves in the range of 2.5-3.1 metres are forecast during 08:30 hours on November 29 to 23:30 hours of November 30 along the coast of Kerala from Vizhinjam to Kasargod. The alert also carried an advisory for fishermen to be cautious while venturing into the sea.

Former senior official at the SDMA Keshav Mohan said that the authority’s emergency operation centre should have multi-skilled scientific experts to observe, study, analyse and advise the SDMA and the state government on time. “Currently, the state emergency operation centre is short of experts who are capable to identify and advise on disasters. That is why we failed to act on time. We should see this failure as a lesson and move ahead rectifying it so that the same mistake is not repeated,” Mohan said.

Meanwhile, former fisheries minister of Tamil Nadu Shibu Baby John said that churches and authorities in villages of the state bordering Thiruvananthapuram had issued warnings for the depression formation too. “They didn’t wait for the cyclone declaration. They acted in a timely manner. If they can, why can’t we?,” he asked.

In a tweet on November 29 at 7:23 pm, the Tamil Nadu State Disaster Management (TNSDMA) had alerted fishermen in Kanyakumari, Tuticorin and Ramanathpuram not to venture into the sea, and had provided details on wind speed and the path of depression.

Depression over Comorin area intensifies into deep depression.Likely to form into a cyclonic storm during next 12 hours. #Kanyakumari, #Tuticorin #Ramanathpuram fishermen advised not to venture into Sea. See attachment for more details. pic.twitter.com/A3LrCGF2aR

Such an alert was not issued by the Kerala government.

According to official figures, so far 690 fishermen have been rescued from the sea, out of which 197 hail from Thiruvananthapuram. 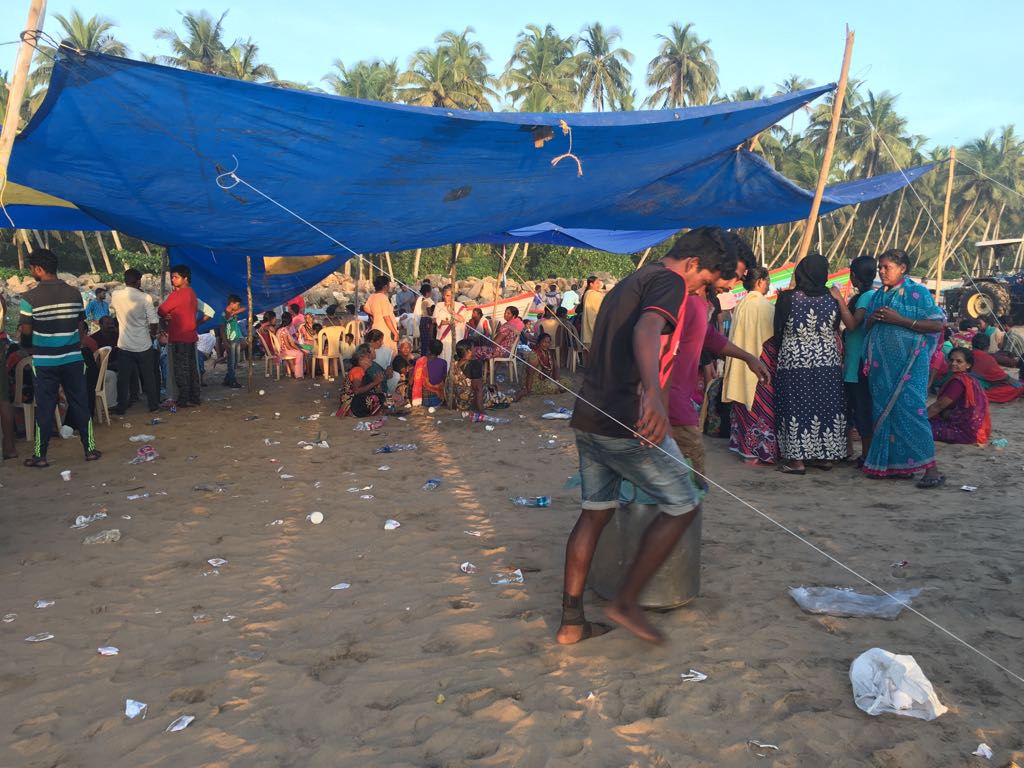 A temporary camp set up on Poonthura beach in Thiruvananthapuram. Credit: Rejimon K.

Close to 1600 families have taken shelter in 37 relief camps in Kerala’s six districts. The financial toll caused by the cyclone has been pegged at Rs 17.28 crore so far.

Michael S., a social activist based in Poonthura, also confirmed that government authorities had failed in alerting them on time, and alleged a lack of coordination in rescue operations.

“We still don’t know how many are missing,” Michael added.

Father Justin Judin, the head of Poonthura Church, said that even the disaster, the state government has not opened even a camp office to coordinate the rescue operations.

“We were told that 60 people were rescued by Japanese ships, 40 were rescued by some others, and all are being brought to the coast. But the fact is that they were all lies. We were betrayed,” Fr Justin added.