Going against the general preference for HYV rice, some marginal farmers in Bankura have started conserving, documenting and propagating traditional varieties. 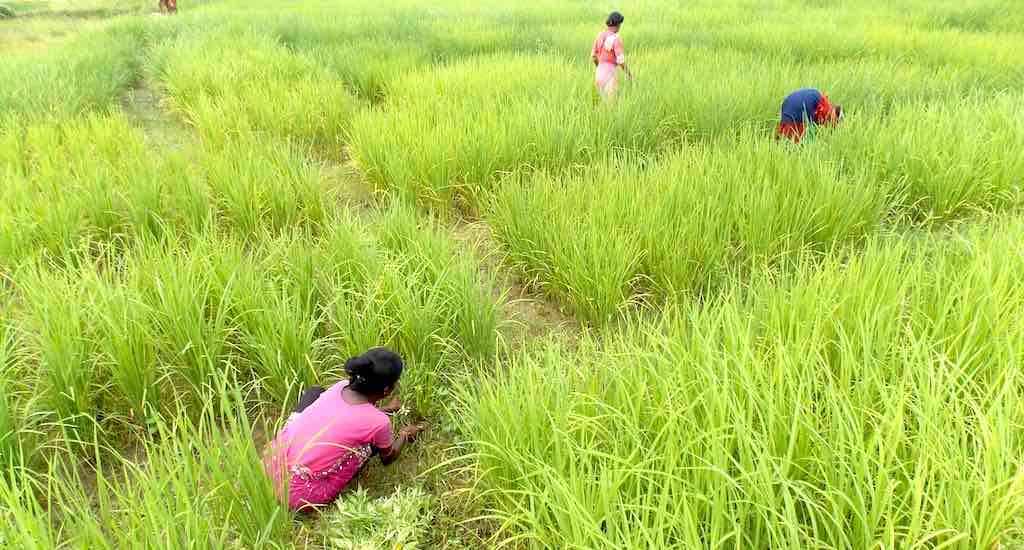 Farmers in Bankura district of West Bengal grow traditional varieties of rice, including aromatic rice, organically, to conserve and propagate them Credit: ARSWS

As we stood beneath the sky laden with clouds, “Watch the play of green,” said Anjan Kumar Sinha, a botanist. Indeed, the knee-high paddy bedecked in hues ranging from teal to moss and scores of green shades in between swayed, buffeted by the moist breeze of mid-September.

The size of car-parking lots, the farm plots were a mosaic of vivid as well as somber green in rural Bankura, also known as rangamatir desh or the land of red earth. Each plot had a different traditional variety of paddy that has the potential to be developed for climate resilience, being conserved by a group of farmers.

Agriculture is the mainstay of people in Bankura district, known among art lovers for its terracotta horses and medieval temples. The majority of them are small and marginal farmers. The net cultivable area of the district is 4.30 lakh ha. The average landholding is 1.02 ha, the fragmentation caused by division of land among family members over generations.

Paddy is the main crop, grown in 4.28 lakh ha, followed by potato, vegetables and oilseeds. Here, like elsewhere in West Bengal, the high-yielding variety (HYV) rice is the preferred choice. Folk varieties or landraces having been abandoned due to low yield and less market demand, despite the lesser inputs needed to grow them.

During the course of his research on West Bengal’s agro-biodiversity Sinha (36) visited remote agricultural pockets and found traditional varieties that held promise for crop improvement on the verge of extinction. He felt the need to be conserve and document them.

“Interested in cultivating HYV rice that give better yield, our farmers completely ignored traditional variants, and we are losing our agricultural treasure that has stood the test of time and may be the source of climate resilient crop,” Sinha, who is a part-time faculty in Bankura Sammilani College, told VillageSquare.in. “As a farmer’s son, I understand the importance of traditional varieties and try to preserve our seed wealth with the assistance of several marginal farmers.”

The cultivated rice, Oryza sativa, originated in South East Asia and evolved into 88,681 different varieties, of which 55,615 are landraces, 1,171 are wild races and 32,895 are other varieties. Green Revolution improved production of food grains making us self-sufficient but HYV, its backbone, indirectly caused erosion of landraces and wild varieties. 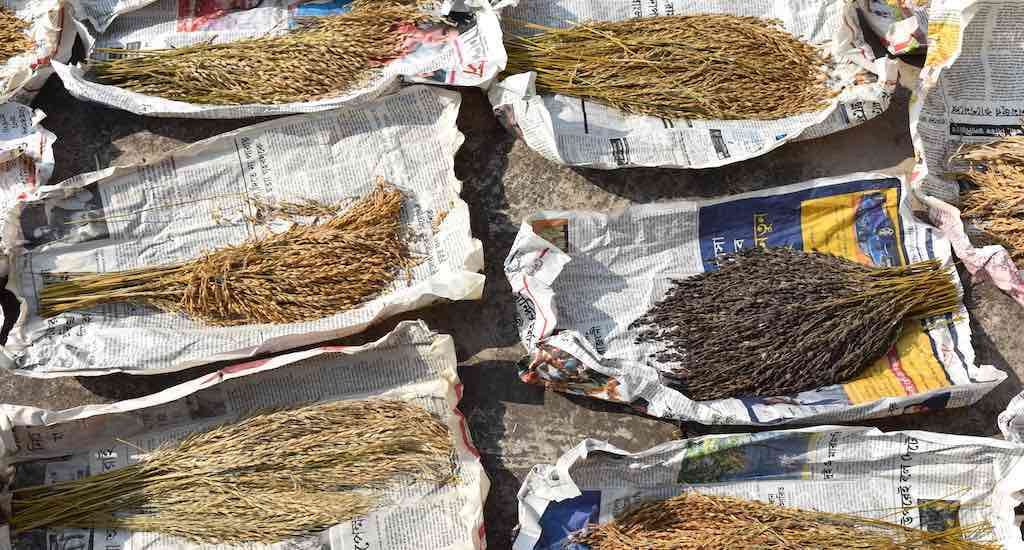 Traditional varieties of rice being dried in preparation for conservation and future use Credit: ARSWS

Once considered the rice bowl of India, West Bengal boasts of a large number of landraces. According to an estimate, the state hosts over 50,000 varieties of rice, a majority of them having disappeared due to faulty agricultural practices. Lured by HYV, farmers have confined themselves to 15 such races and have ceased cultivating the folk varieties.

These varieties are of immense value in agriculture as they are a treasure house of innumerable important genes, having evolved in a particular environment over millions of years. Development of disease-resistant newer varieties is possible with the genes available only in landraces.

Guided by Sinha, rice growers of six villages in Bankura have formed the Ranabahal-based Amarkanan Rural Socio-Environmental Welfare Society (ARSWS), a farmers’ group that preserves and propagates folk rice varieties. Presently the group boasts of 50 members. Membership is increasing, though at a slow pace, as there is little awareness about folk varieties among consumers.

One can become a member by expressing willingness to cultivate the traditional paddy variety without the use of chemical inputs. The farmer gets 500g to 1kg of seeds on becoming a member. About three-and-a-half months after cultivation, he returns 1kg of seeds from his harvest.

Most farmers said that they grew the landraces for personal consumption due to their aroma and nutrition. “A kilo of seeds yields between 50 and 60 kg of rice,” farmer-member Biman Sinha (50) of Ranabahal village told VillageSquare.in. Biman Sinha has been growing aromatic varieties like Gobindobhog, Danarguri and Sindhurmukhi organically in five bighas (three bighas equals an acre) for the past eight years.

Before transplanting the paddy, most farmers replenish the soil by ploughing leguminous green manure crop Sesbania (locally known as dhonche) or Gliricidia into the soil. Both roots and stems host the friendly rhizobium bacteria that trap atmospheric nitrogen, their decay releasing nitrogen in the soil, along with organic matter, thus enriching it.

HYVs require high inputs compared with the folk varieties, with expenses increasing every season. “In HYV, the input costs are more and so is the output. For instance, the fertiliser cost for HYV is Rs 4,500 per bigha whereas in folk varieties it’s barely Rs 400 as we use farmyard manure and cow dung,” Ujwal Das (35) of Koro village told VillageSquare.in. He grows Sitasal, Kalobhat, Kalamkati and others for his eight-member family on his two bighas and high-yielding Swarna in four bighas.

At ARSWS, the different physical, agronomic and morphological characteristics of the collected landraces at different stages of growth are recorded, beside other parameters like plant height, panicle length and number, leaf size, maturity period, grain size, and weight of 1,000 grains. 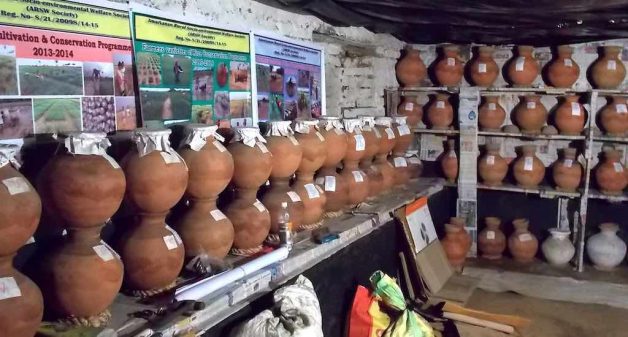 So far ARSWS has registered 116 traditional rice varieties with the Protection of Plant Variety and Farmers Rights Authority, an effective system to protect plant varieties and rights of farmers and plant breeders. Seeds are stored in traditional way in clay pots, using dried neem leaves to protect the seeds from insects or worms.

A rarity, aromatic rice varieties are considered among the precious treasures of India and also a national asset. “The presence of a novel volatile compound, namely 2-acetyl-pyrroline is responsible for its aroma,” Kalyan Jana, professor of agronomy at Bidhan Chandra Krishi Viswa Vidyalaya, Kalyani told VillageSquare.in.

“The aroma is greatly enhanced if the paddy is grown during monsoon and provides better yield along the desired properties if organic methods of cultivation are followed strictly,” he said.

Rice is the staple diet in West Bengal followed by its byproducts like puffed rice and flattened rice. Rice protein ranks high in nutritional quality among cereals, though protein content is modest. Unmilled or unpolished rice provides 4.3% to 18.2% protein. For the majority of Asians, 35% of the total intake of 2,531 calories per person per day comes from rice. Breeding efforts to increase protein content have so far been largely unsuccessful.

If a species’ genetic variability is diminished, its ability to evolve in response to the changing environment will be proportionately restricted. Hence the likelihood of its extinction is enhanced. Considering the disappearance of 95% of rice variety, and the consequent loss of genetic variability, one can estimate the magnitude of risk to rice species.

ARSWS’ initiative being an on-site conservation, seeds of the varieties to be conserved are grown and multiplied on farms with the desired traits refined through adaptations to changes in the natural environment.

“Though small, the farmers’ efforts to conserve provide us with the opportunity to tap into the germplasm to develop newer varieties which can mitigate climate change issues like erratic changes in temperatures, humidity etc. resulting in appearance of new pests and diseases,” Paresh Chandra Kole, professor at Department of Genetics and Plant Breeding & Crop Physiology, Visva-Bharati University, Shantiniketan, told VillageSquare.in.

Hiren Kumar Bose is a journalist based in Thane, Maharashtra. He doubles up as a weekend farmer. Views are personal.

This article was first published on VillageSquare.in. Read the original article here.