The fish probably escaped from aquaculture facilities during the floods, and are now ‘fugitives’ in the natural ecosystem..

Arapaima is one of the world’s largest freshwater fish, endemic to the Amazon in South America. Photo: Jeff Kubina/Flickr (CC BY-SA 2.0)

It was September 7, barely a month after the floods of 2018 had wrecked large parts of Kerala. Though life was far from normal in Thrissur’s coastal Kodungalloor, 48-year-old Jaison Kallarackal was at his Chinese fishing net at dusk to land the day’s catch. As he began to haul the net up, he realised that it was unusually heavy; something large was wriggling in the net, causing it to shake. When a final heave raised the net slightly above water, Kallarackal could not believe his eyes.

Squirming around at the base was a fish he had never seen before: flat-headed and sporting large scales tinted in pink and cream. It measured six feet long and weighed a whopping 41 kilograms.

WhatsApp photographs of the unusual fish brought Smrithy Raj, a doctoral researcher studying fishes at Thiruvananthapuram’s University of Kerala, to the spot in a couple of days. But all he saw of the fish was its severed head: it had already been sold in the market. His journey, however, was not in vain; he was able to procure a small piece of fish tissue from the head.  Genetic tests revealed that it was the arapaima, one of the world’s largest freshwater fish, endemic to the Amazon in South America.

After a month’s such work of analysing news reports, social media photographs and videos of ‘strange’ fish caught after the 2018 floods, and re-confirming sightings with local fishermen and fish vendors, the team – of A. Biju Kumar (University of Kerala), Raj, C.P. Arjun (of Thiruvananthapuram’s Indian Institute of Information Technology and Management) and Unmesh Katwate and Rajeev Raghavan (of Kochi’s Kerala University of Fisheries and Ocean Studies – KUFOS) – also obtained information on the presence of the alligator gar, another fish never recorded in Kerala’s waters before. Like the arapaima, the gar too is alien: its native habitats are the freshwater lakes of North America.

These post-flood field surveys revealed that fishers had caught arapaima and gar from four flood-affected rivers in Kerala: the Periyar, Muvattupuzha, Kurumali and Chalakkudy. The presence of these alien fish – which are being farmed illegally in the state – could bode ill for Kerala’s native fish diversity, claim the scientists. In their communication in the journal Current Science in May this year, the team call for an urgent nationwide scheme to eradicate such alien fish species. 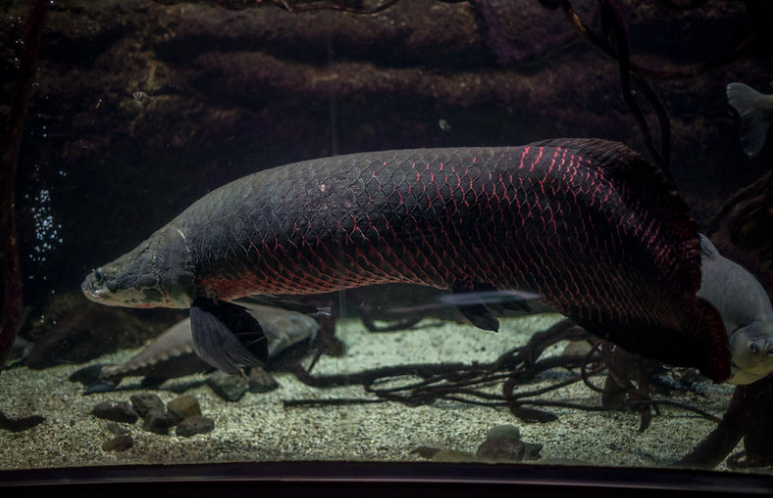 Arapaimas are air-breathers, a feature that could help them survive even in polluted habitats. Photo: Jin Kemoole/Flickr (CC BY 2.0)

Kerala’s river systems, which the authors study, are home to around 200 species of fish, 30 percent of which are endemic to the region. But this diversity is at risk due to ‘fugitive’ fish such as the arapaima and gar that escaped from aquaculture facilities and farms during the floods, claim the authors. Calling the 2018 floods one of the most “significant threats” to Kerala’s fish diversity, the team adds that the presence of alien arapaima (Arapaima gigas) and alligator gar (Atractosteus spatula) here is a serious concern for several reasons.

Both alien species can grow to be enormous. While alligator gar can measure up to three metres in length, arapaima is five metres long and weigh up to a whopping 200 kg. Both species are also top predators in their native habitats, feeding on smaller fish (which puts Kerala’s small native species at risk). The arapaima and gar are dedicated parents too: their active care of their young increases the survival of their broods.

Additionally, arapaimas are air-breathers, a feature that could help them survive even in polluted habitats. Their large scales are tough for predators to break through. Arapaima introductions in some American countries have caused a decline in native species, which in turn has affected local fisher livelihoods. Alligator gar too are formidable predators; they are piscivorous generalists with an affinity towards live fish, said Raghavan, an assistant professor at KUFOS.

“This species could have a bigger chance to proliferate in Kerala’s freshwater habitats than the arapaima,” he says.

However, there are no studies on the actual impacts these species could have on freshwater systems in India. And the team recorded only six arapaima and gar in total: a number that seems barely enough to ‘threaten’ river systems.

But though neither of the fish seems to have established “sustaining populations” in any of these river systems, their presence here is still a cause for concern, claims Kumar, professor and head of the Department of Aquatic Biology and Fisheries at the University of Kerala.

“These are hardy species and our water bodies are ecologically suitable for them to establish good populations,” he wrote in an email.

Alligator gar in Kerala’s waters could indeed be a potential concern because the species is primarily carnivorous and can feed on native fish, said V. S. Basheer, principal scientist at Kochi’s National Bureau of Fish Genetics Resources (NBFGR). But unless we know the numbers of these aliens in our river systems or their reproductive status, it would be impossible to make predictions, he added.

“Whether the species could turn invasive would depend on the number of breeding pairs that entered Kerala’s water bodies,” agreed Kumar. “However, there is no data on this, as most of the farms that were growing these fish are illegal and no one has background information on the number of fish stocked in these ponds along these flood plains.”

But not all exotic species become invasive, cautions Nachiket Kelkar from the Ashoka Trust for Research, Ecology and the Environment (ATREE) in Bengaluru, who has studied fish communities in the Western Ghats and north India.

“To be billed as an invasive, the species must proliferate to unnatural abundances in the habitats where they get naturalised, and also outcompete other species,” he wrote in an email.

Kerala does of course have its share of naturalised exotics and invasives. While tiny swordtails and the giant gourami (both ‘fugitives’ of the ornamental fish industry) have established themselves in some rivers and streams of Kerala but are not invasive, the same cannot be said of the African catfish Clarius gariepinus. The illegally-introduced species is fast becoming a major concern in the state, says Basheer, who is part of an NBFGR project to study the impacts of exotic fish species in Indian waters

“Populations of African catfish are rapidly increasing in some waterbodies in Kerala, such as the Mattupetty, Aanayirangal and Periyar reservoirs of Idukki district,” he says. “There are at least three native fish species endemic to Periyar Lake and the rising catfish populations could affect them.”

Other invasives include the guppy and mosquitofish (legally introduced to control mosquito populations). ‘Tankbusters’ – fish that are capable of outgrowing most domestic aquaria — are a problem too. Kumar, who documented how ornamental exotic South American suckermouth armoured catfishes (genus Pterygoplichthys) were invading the drain networks of Thiruvananthapuram city in a study in 2015, found that traders and aquarium hobbyists were releasing these fish into drains when they grew too large for their aquariums or tanks.

Similarly, there is a huge demand for arapaima and alligator gar among fish hobbyists but these fish quickly outgrow their aquariums and owners often release these fish in the wild, said Raghavan.

But the larger problem of aliens turning invasive is not restricted to Kerala’s waters alone. Several fish introduced legally in India for aquaculture such as tilapia are thriving in many water bodies across the country. So are many illegally-introduced species (such as the red-bellied pacu and African catfish), which do not figure in the list of 92 species permitted to be imported into the country as per the guidelines laid down by the Department of Animal Husbandry, Dairying and Fisheries. There are news reports of alligator gar sightings from waterbodies in the states of Maharashtra, Odisha, West Bengal, Telangana and Andhra Pradesh.

While existing laws such as the Wildlife Protection Act of 1972 and the Environment Protection Act of 1986 have included provisions for managing invasive species as do some prevailing quarantine acts, there is no national policy to deal with these species, pointed out Kumar.

“There is no clear cut policy to handle invasive species in India, not to speak about a dedicated institution to foresee invasive species management, despite being part of international commitments such as the Convention on Biological Diversity,” he adds.

In their opinion note in Current Science, Kumar and his colleagues point out that this is in conflict with the Aichi Biodiversity Targets (which specify controlling and eradicating alien species as well as sustainable management of aquaculture, among others) that India has agreed to ratify as well. The team called for an urgent need to develop and implement a nationwide ‘alien species management and eradication scheme’. This policy, coupled with both an extensive database of invasive species with information on their invasion biology and an awareness campaign, would help in gradually managing the issue of invasive species, suggests Kumar.

At the state level, multiple government departments such as revenue, fisheries and district administrations would have to come together along with research institutes, the forest department and local authorities to implement management interventions, said Basheer. People wait for aid on the roof of their house at a flooded area in Kerala, in August 17, 2018. Photo: Reuters/Sivaram V

Some species may need to be addressed specifically. For instance, in the case of the African catfish, identifying “recruitment areas” from where invasive fish fingerlings could be dispersing to other connected habitats such as swamps and wetlands (habitats with standing vegetation and slush where the catfish thrives very well and breeds) could be important, added Basheer. Physical removal of catfishes from these areas would also help counter the situation, he suggested; in Periyar, the NBFGR along with the Periyar Foundation has taken up a programme to remove African catfish from the lake by involving tribal fishermen, he said.

The government should also audit fish farms to see what alien species they are stocking, and make it compulsory for farms to declare these species and their numbers, said Raghavan.

“No new licenses should be given to farms for importing alien species,” he added.

There is a list of species that are prohibited from being imported into India, and the alligator gar does fall in this category, said Aneish P. Rajan, Kerala Joint Commissioner Customs (Preventive).

“The customs handle violations that occur at the frontiers such as seaports and airports and there have been recent instances of seizing some prohibited fish species too,” he said.

Indeed, stronger quarantine laws to completely restrict any foreign fish species from deliberate introductions hereafter are important, agreed ATREE’s Kelkar. Clear definitions of when a species is invasive in the real sense and causes ecosystem- and fisheries-level impacts are also crucial, he said.

A change in perspective could be key too. “For the police and customs staff checking on biological quarantines, fish are fish. This has to change, as we try to control truly invasive populations,” added Kelkar.

With the floods that have once again occurred in some parts of Kerala over the past few days, there is indeed a chance that exotics held in captive facilities have moved into nearby natural waters once again, according to Raghavan.

“But the flood situation is still grim and fishing in rivers has not resumed,” he says. “Once it does, we can get information on new occurrence records again.”

The team plans to begin this work once again from next week to obtain more information on alien fish species that this year’s floods may have released into Kerala’s water systems.

This article originally appeared on Mongabay.