Do the Egyptian Fruit-Bat Vocalisations Show Signs of a Vocabulary?

This is the latest study in the growing field of research on animal vocalisations. Deciphering animal communication is an important aspect of tracing the evolution of language in humans. 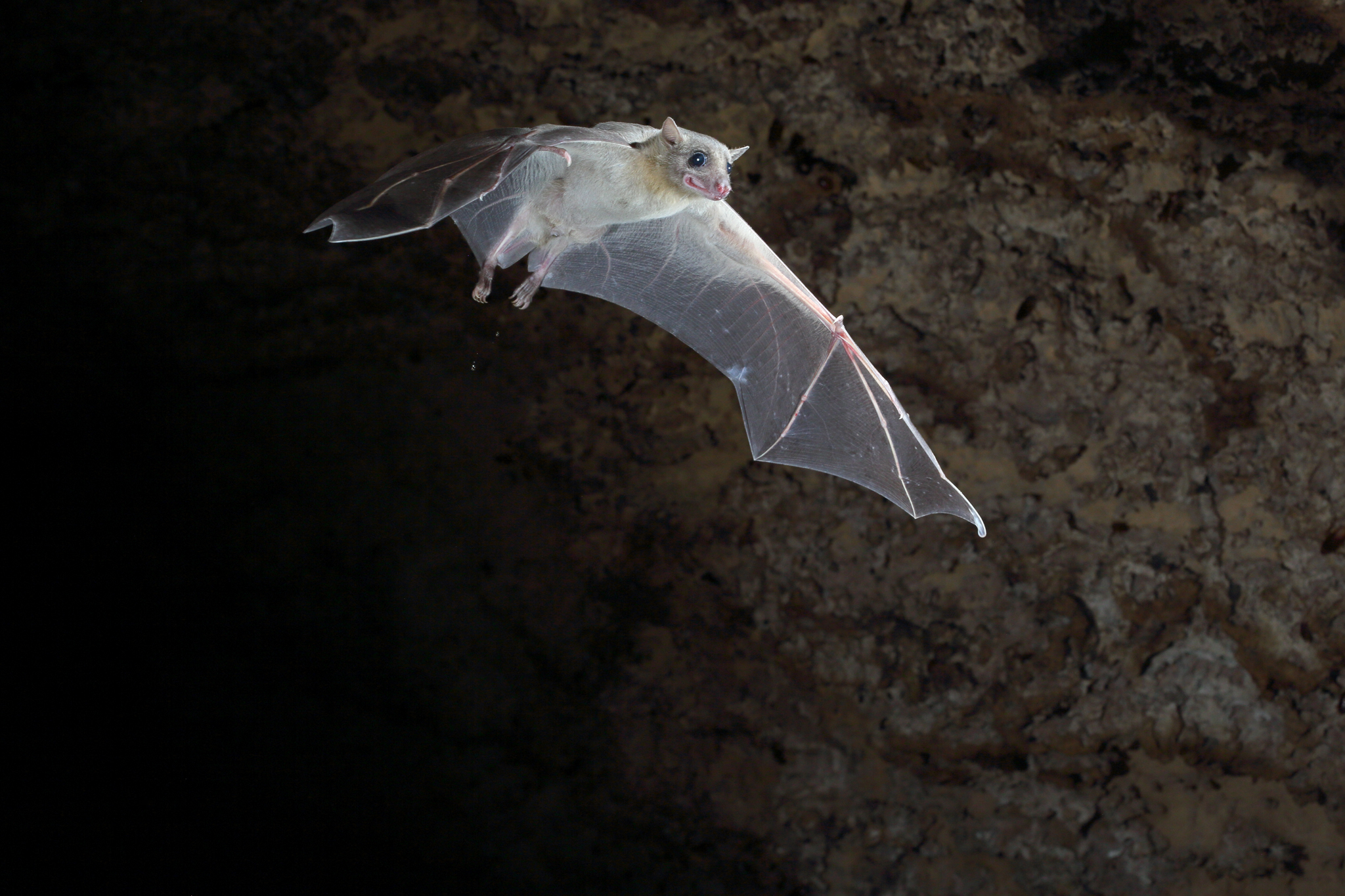 Egyptian fruit bats are unusual among fruit bats for roosting in caves during the day. Other species roost on trees. Credit: Jens Rydell

Six-inch-long Egyptian fruit bats, with a wingspan of two feet, spend the day roosting in large colonies inside caves. These flying mammals are a fractious, noisy bunch, beating all other bat species with their volubility. To any human within earshot, their racket sounds like babble. But scientists, who’ve deciphered these noises, say they make sense.

“When you enter a bat cave, you hear a lot of ‘gibberish,’ a cacophony of aggressive bat noise – but is this merely ‘shouting’ or is there information amid the noise?” asked Yossi Yovel. “Previous research presumed that most bat communication was based on screaming and shouting. We wanted to know how much information was actually conveyed – and we wanted to see if we could, in fact, extract that information.”

Yovel and his students, Yosef Prat and Mor Taub, Tel-Aviv University, Israel, filmed 22 captive Egyptian fruit bats with infrared sensitive cameras and recorded their vocalisations using ultrasound microphones round the clock. Each bat wore a distinctive collar with a reflective disc for identification.

From these recordings, the scientists narrowed down approximately 15,000 vocalisations of seven adult females recorded over the course of 75 days. They didn’t include calls of males since they didn’t call much. When they synchronised the audio with video, they could observe who called to whom, under what conditions and how the other bat responded. On sight, it was easy enough to identify who called: it was the bat whose mouth moved. To pick out individual bat’s calls, the researchers used a speech recognition algorithm.

Even though the calls sounded similar, the software enabled them to classify 60% of the calls. The investigators recognised their subjects complained under four situations: when another tried to grab their food, disturbed their sleep, invaded their personal space and when the attentions of males were unwelcome. The bats didn’t whine to the colony at large but directed them at specific individuals.

“The interactions are almost always pairwise, often with physical contact between the individuals and usually with the vocalising bat facing its peer,” Yosef Prat told The Wire.

It would be easy to watch the interactions and come to a conclusion about the subject of a bat squabble. Obviously, an argument is over food when one had a piece of fruit that the other tries to snatch. No prizes for guessing what a female is screaming about when a male tries to mount her.

Could the researchers guess the bone of contention by listening to the calls alone? They say the algorithm enabled them to recognise the subject of the calls with a reasonable degree of accuracy. This means an eavesdropping bat can tell who is calling and with whom it might be arguing. The bats addressed every individual differently by varying their inflections depending on whether they were “talking” to males or females, friend or foe.

“Our finding might be akin to a human speaker who uses varying intonation towards different listeners (e.g. male vs. female addressees) while using the same words,” the researchers write.

This is pathbreaking research since researchers had lumped all these calls under a catch-all category called aggression because cataloguing them had been difficult. 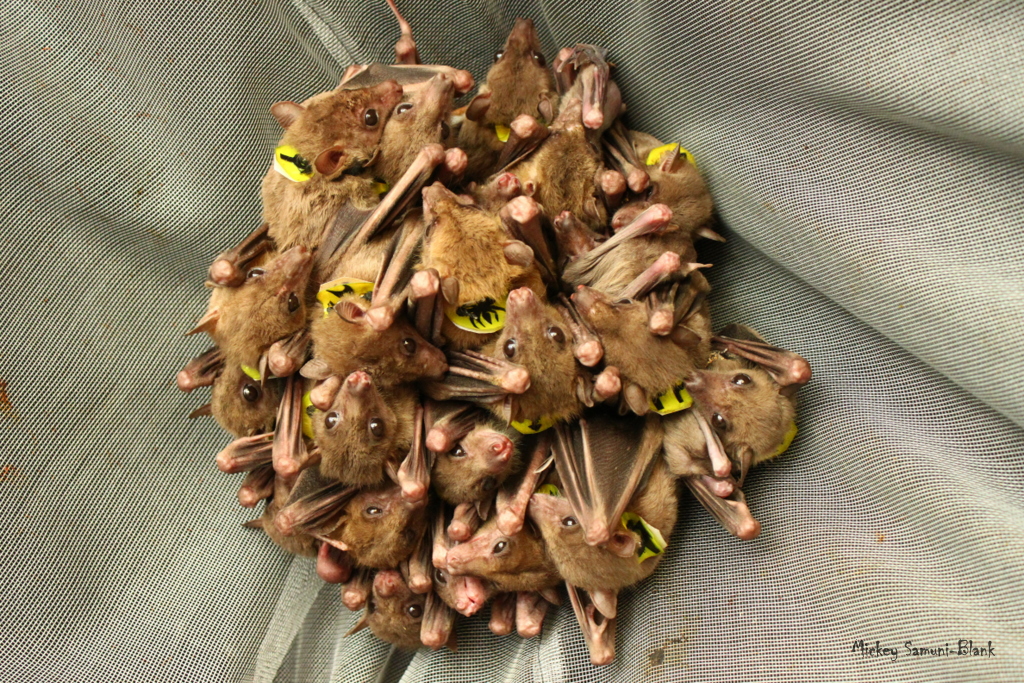 A group of Egyptian fruit bats that featured in the study. Credit: Michal Samuni-Blank

“While the tools bioacousticians had access to in the past were really rudimentary, with the development of machine learning techniques,” Julie Elie told The Wire, “we are now able to detect more subtle acoustic differences and test our hypothesis on larger datasets, making the results more convincing.” Elie, a postdoctoral fellow at the University of California, Berkeley, specialises in bird call communication and wasn’t involved in the bat study.

A batty harangue could end with one bat or both bats leaving or both opting to stay. To their surprise, the scientists discovered they could predict how a squabble might play out even in darkness.

“All of the predictions were based only on the properties of the vocalisations,” says Prat. “We used a machine‐learning approach: we fed the computer with recordings for which we knew the outcome from the videos. The computer identified patterns which enabled the classification of new audio recordings. Correct predictions of the outcome of the new recording were only possible if the vocalisation alone contains such information.”

Does this mean that bats have a vocabulary?

“We found that bats transmit information using the acoustic properties of their calls,” says Prat. “It could even be more similar to intonation than to vocabulary. I cannot rule out the existence of some vocabulary (in the sense of specific calls in a specific context), though we were not able to identify such in this study, but I believe that variations in the acoustics between contexts may be the evolutionary origin of vocabulary.”

The researchers feel if an algorithm can pick out this degree of information, the animals may be even more proficient. After all, their social lives are spent in dark caves where they couldn’t see each other. So a lot of information has to be packed in their cries.

“While the methods used by these researchers are not explained in great detail in the article, their classification algorithm seems valid and results do convince me that fruit bats change their calls depending on the context and the addressee,” says Elie. “Now, it would be interesting to investigate in more details the acoustic parameters that encode information about the context and addressee and to explore if/how bats use this information.”

When they began the study, the researchers suspected the bats conveyed some information. “But we had no idea how many details we could actually recover from this noise,” says Prat. “In fact, we believe that we only discovered the tip of the iceberg, since we only used very specific aspects of the calls.”

This is the latest study in the growing field of research on animal vocalisations. Deciphering animal communication is an important aspect of tracing the evolution of language in humans.

The study was published in the journal Scientific Reports on December 22, 2016.