The approval rate under the EIA is almost 100%. But the rate of non-compliance is also as high, but violators are rarely ever punished.

The Indian government released a draft Environment Impact Assessment (EIA) notification 2020 for public comments on March 12, 2020, days before a countrywide COVID-19 lockdown was announced. The draft notification proposes a revised ‘environmental clearance’ process for 43 categories of industrial and infrastructure projects. Despite the limited opportunities for protests during this period, the draft has become a public controversy. Legal cases and digital protests have criticised the draft for its content, timing and public outreach. There are demands to scrap the draft and design a new, stronger law.

Although the environment minister called the public criticisms “premature“, the government is finally presenting its thinking behind the draft now. In their interviews, the environment minister and secretary have made three main points as justification for the draft EIA 2020. These are: all EC violators should be regularised so that they can be brought into the ministry’s “regulatory regime“; projects start operations or expand without ECs because government takes too long to decide; and project approvals can be made more permissive as projects will be strictly monitored to manage all the impacts.

These statements in support of the draft are not backed by empirical data or by sound environmental principles and legal basis. They show more clearly that the EIA notification is seen only as a project licensing process, to be made easier for those seeking approvals.

The approval rate under EIA is nearly 100% which means no project is ever rejected. But another statistic that is equally important to see alongside this is on project non-compliance. It is also nearly that high.

According to the environment ministry’s website, over 15,000 projects have been granted EIA approvals since 1994. Each project was permitted with conditions meant to prevent problems such as leaks, discharges and emissions that contaminate the environment, illegal tree felling, landslides and encroachments. The conditions also require projects to take up afforestation, set up health camps and assessments, recharge groundwater and provide occupational safety devices.

In 2009, the non-compliance of these conditions was upwards of 90%. Since then, the approval procedures have been diluted and there have been no improvements to the monitoring aspects of the EIA. In effect, the EIA system has assured approvals to most projects but systematically failed to attend to the social and ecological costs of the huge inventory of approved projects that violate their approval conditions. Therefore, there is a very sound case to be made for a moratorium on EIA approvals to new or expanding projects until the load of impacts caused by operational projects is managed and mitigated through effective legal and policy measures.

The EIA system has approved projects, often despite community opposition to them. The scientific appraisal process identifies a fraction of the problems that the project operations can create. The project’s approval conditions determine what project impacts deserve to be managed or mitigated and what gets externalised to the public. But even the impacts identified in the approval conditions are not managed because of the high levels of non-compliance and poor monitoring of these projects. As a result. projects have knowingly exposed people to years of pollution, lack of jobs, loss of water sources and poor rehabilitation. A growing number of cases of non-compliance are being brought to the NGT, but that is merely the tip of the iceberg, given the limitations of access to justice.

This article draws from research on 37 cases to show the deficiencies of India’s EIA monitoring system. These cases involved projects that violated environment clearance conditions and communities facing project impacts tried to obtain remedies by bringing such cases to the attention of regulatory bodies. These cases prove that environmental impacts and disasters occur not only because projects do not take adequate measures or put in safeguards against accidents. Government monitoring routinely encourages non-compliance through its own actions of abetting project violations and impacts. Of these cases, 20 cases were in violation for four-five years and six cases for over 10 years. Although these projects had compliance and monitoring reports, the violations by them have continued.

In 20 out of the 37 cases, affected communities brought evidence of violations to regulatory bodies in the EIA system, such as regional and central offices of the environment ministry and the SEIAAs. This experience of putting together evidence on non-compliance showed that such evidence is available through many sources including government’s own data and scores of media stories or petitions and memoranda submitted by affected communities over years of the project’s operations. Yet, these cases of project violations and impacts are not “visible” to the regulatory system.

No intention to enforce EIA conditions

Affected communities pursued their complaints at substantial time and monetary costs to them that involved making phone calls, visiting regulatory offices, attending meetings and collecting relevant information. Out of the 20 cases on which well-drafted complaint letters with evidence were taken to EIA regulators, four got no response at all, despite multiple follow-ups. Of the remaining 16, four got some response from the EIA regulators in the form of site visits and acknowledgement of the violation. But due to the lack of concrete action against the violation, the problem persisted and there was no meaningful remedy.

In the remaining 12, the complaints were redirected to the SPCBs with directions to take “appropriate action”. In these cases, the affected community had to return to the process of establishing evidence for violations with the SPCBs. In some cases, the complaint letters were pushed between government offices for up to two years, without involving the complainant. These details became known to the community members only when they filed Right to Information (RTI) applications.

The initial responses from the above offices included discrediting or refuting the basis of the complaint. Action was taken on violations only after community members reiterated their complaints and gave fresh evidence of the continuation or repetition of violations. On complaints involving big mining projects in Chhattisgarh and Odisha, violations were officially recorded only when the regulatory authority was compelled to undertake inspections jointly with project-affected communities. In cases where the evidence of project violations was accepted and where SPCB officials came to inspect the site, show cause notices were issued to the violating projects. But this too did not stop projects from continuing their violating operations. Regional offices do not issue show-cause notices without prior permission from the central environment ministry.

Of the 20 complaints pursued by communities, only seven cases were resolved. And out of those, in three cases, violations reoccurred within 5-6 months. These challenges proved to affected communities that if harmful projects are not held back at the outset, getting environment regulators to control the polluting operations of approved projects in nearly impossible. 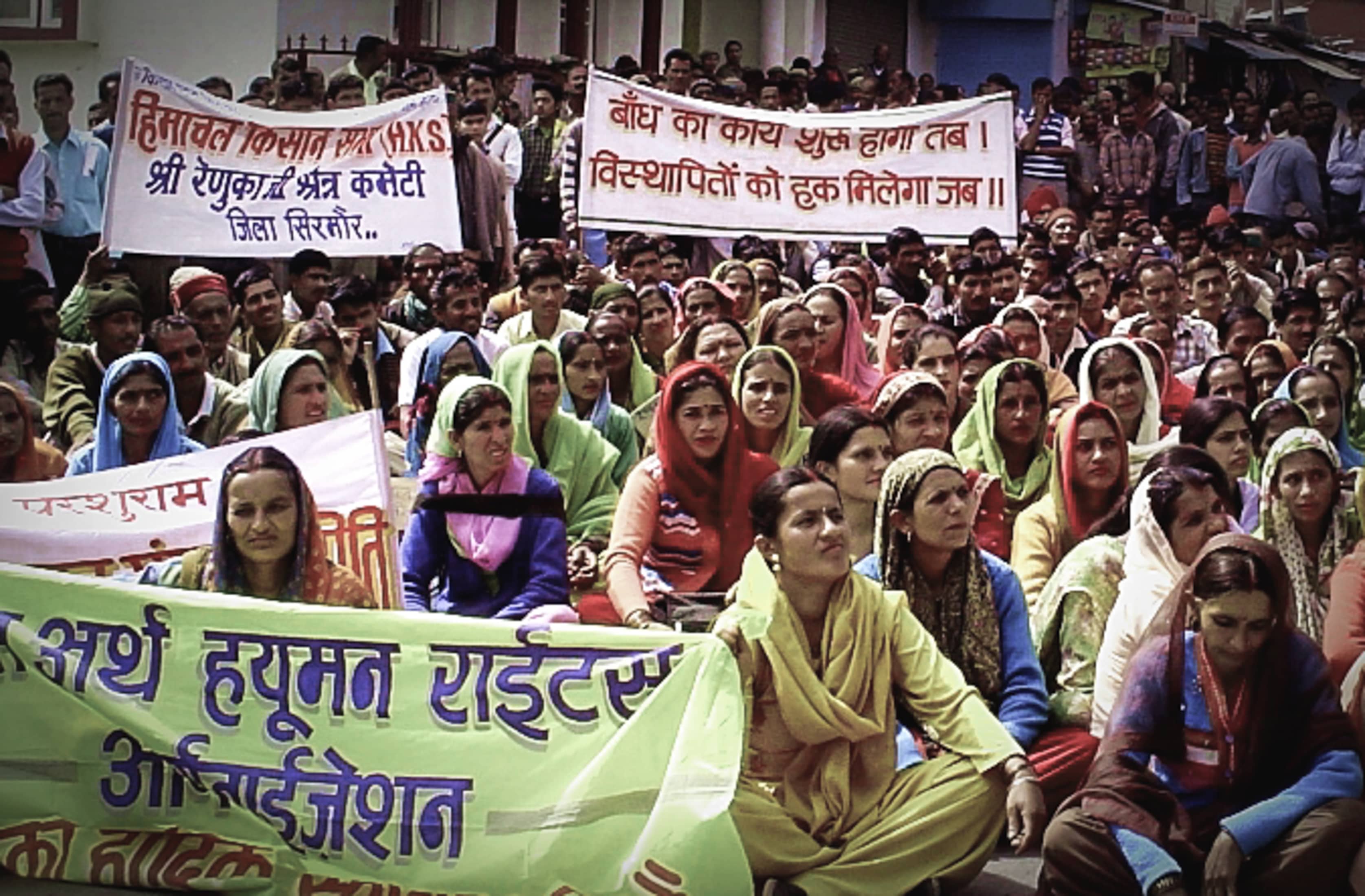 A protest by locals and members of environmental organisations in Renuka Valley, September 2010. Photo: Sumit Mahar

Why approval process shouldn’t be eased

Our EIA system approves nearly all projects but does not control their harmful operations. EIA regulators are also hostile or patronising to affected communities who bring complaints about project violations that affect their lives.

In these circumstances, it would be a great folly to further ease the process of granting approvals to new or expansion projects and bring violating projects within the regulatory net. Such objectives of the environment ministry run counter to environmental principles. It is important to link the demands for institutional reforms in EIA with the justice-oriented efforts and experiences of communities affected by EIA violations.