Urban, elitist and savarna proponents of evictions see state-controlled migrations of forest-dwellers as a way to 'cleanse' forests. 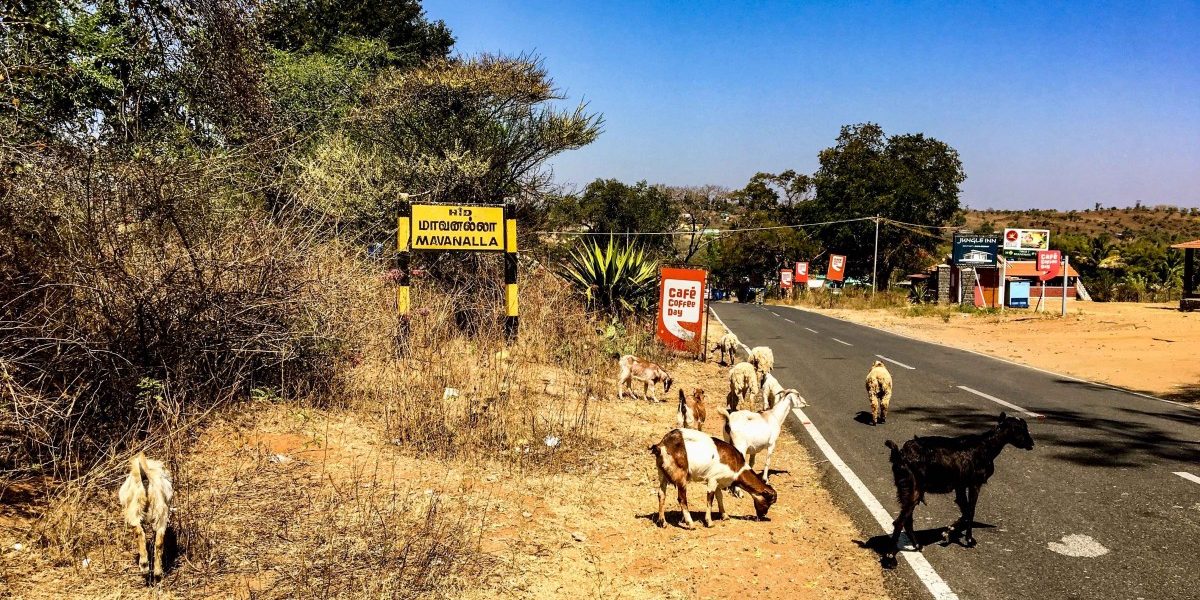 Goats owned by a forest-dependent local communities along a road through the Mudumalai Tiger Reserve. Note the presence of Cafe Coffee Day, an elite establishment allowed to function in the area. Credit: Dhruv Gangadharan

The Supreme Court temporarily withheld its eviction notice to a million forest dwellers – but not before it revived a debate on how conservationists see protected areas (PA) and forest-dwelling communities in India.

The court’s original order was in response to petitions filed in the interest of wildlife, and against the Forest Rights Act (FRA), which legitimises forest-dwellers’ rights.

The more alarmist narratives – about humans living inside forests – have been guided by the idea that humans are inimical to conservation. This “hands-off nature” approach is the manifestation of a model called fortress conservation. However, biodiversity conservation isn’t just about demonising human populations. It also has ethical, social and political dimensions.

Forest-dwellers reside in settlements inside PAs or seasonally migrate between PAs. For example, the Toda of the Nilgiris are settled in places favourable to agriculture and cattle-grazing. Their buffaloes graze in elevated grasslands, and their economy includes milk products. Similarly, the Bargur hills of Tamil Nadu are home to the Lingayat pastoral community, which let their cattle graze on the hills’ grasslands. Apart from milk products, these prized cattle are also sold at the Anthiyur cattle fair.

Both examples illustrate the nature of human activities in spaces ‘reserved’ for nature and wildlife. The Toda depend on the Nilgiri biosphere reserve and the Lingayat, on the Sathyamangalam wildlife sanctuary. And both PAs support charismatic species like tigers, elephants, leopards, gaur, etc.

Also read: The Supreme Court Sends Forest Rights Back to a Dark Past

So any mandate that displaces “forest dwelling scheduled tribes” (FDSTs) and “other traditional forest dwellers” (OTFDs) disrupts their lives and counters the spirit in which the FRA was legislated in 2006. Such displacement is effectively a form of forced translocation in the guise of rehabilitation. It has claimed two ostensibly liberating goals: uplifting communities and ridding forests of human activities that hinder wildlife.

However, urban, elitist and savarna proponents of evictions see state-controlled migrations of forest-dwellers as a way to ‘cleanse’ forests. They are apathetic to the eviction, which damages the communities. Officials present displaced forest-dwellers with formalised economic opportunities incentivising them to abide by new systems of control. However, the communities lose their means of production and face stark class inequalities.

The FRA safeguards forest-dwellers’ rights to access and control forests. However, it has been implemented in a shoddy manner. Its text notes that OTFDs aren’t as beneficial as FDSTs. OTFDs are heterogenous and sometimes include rural migrants from villages bordering PAs that depend on the forest’s fringes for cattle-grazing.

For example, OTFDs own and herd scores of cows, buffaloes and goats on the fringes of the Mudumalai tiger reserve, which is adjacent to the Nilgiri reserve. The forest department demarcates areas fit for grazing, and face transgressors with strict penalties.

This approach is supposedly rooted in the ecological literature on overgrazing, and the resulting competition among wildlife for fodder. In other words, the department permits grazing to the extent that it doesn’t interfere with the PA’s ability to support life without degrading itself.

In fact, members of the ecotourism industry seem to believe that herders are persona non grata. One of them said, “If [tourists] see cattle, they will obviously be disappointed. The presence of cattle makes the sanctuary look like the countryside.”

This symbiotic union between a powerful forest bureaucracy and elite environmentalism transform the FDSTs in general, and the OTFDs in particular, into ‘others’.

The Keoladeo National Park (formerly known as Bharatpur sanctuary) in Rajasthan illustrates this well. In 1981, Indira Gandhi elevated Bharatpur to the status of a national park and nixed the maharaja’s right to hunt birds. However, following an Indian Board for Wildlife recommendation in 1982, the park’s special status prevented cattle-grazing as well. Nine villagers were killed when they protested.

In his book Inventing Global Ecology (2003), Michael Lewis discusses why conservationists feared cattle and showed that the PA’ ‘carrying capacity’ was the ultimate priority. However, a Bombay Natural History Society study found that banning the entry of livestock “hurt the health” of the sanctuary.

In effect, the unidimensional use of scientific knowledge has allowed some to conservationists to isolate the people from the forests using a one-size-fits-all approach. In the words of Ramachandra Guha, as he wrote in a 1997 essay:

All over India, the management of parks has sharply pitted the interests of poor tribal people who have lived in the areas for generations against those of wilderness lovers and urban pleasure seekers who wish to keep parks “free of human interference” – that is, free of other humans. … In this endeavour, they have drawn sustenance from Western biologists and conservation organisations, who have thrown the prestige of science and the power of the dollar behind their crusade.

Why FRA, why now

If conservation intends to engage with the biodiversity in PAs, it’s important to differentiate between subsistence uses by local communities and extractive profiteering. And here lies the urban delusion: of fast-tracking forest clearances for the bourgeoisie through institutions that prioritise industrialisation, questioning vital encounters of FDSTs and OTFDs in the forests.

If forest-dependent communities genuinely participate in conservation, and if economic and environmental policies empower them, Indian PAs would be inclusive institutions. PAs continue to be the best spatial tools to protect nature. So it’s important that we reinvigorate our conservation zeitgeist by defending the forest-dwellers’ rights. Their engaging with nature and encountering wildlife only make PAs more resilient – and democratise forest spaces by breaching the fortress.

Dhruv Gangadharan Arvind is a geographer working on fishing and grazing commons. He is an alumnus of the University of Oxford, and tweets @Dhruv_Ganga.