Families who have moved or are planning to move say that relocating is not an easy decision— financially, socially. But the health benefits of living in a safer, cleaner environment is worth the risk.

A traffic policeman wears a mask to protect himself from air pollution at a junction during restrictions on private vehicles based on registration plates, on a smoggy morning in New Delhi, India, November 4, 2019. REUTERS/Danish Siddiqui

It felt like the apocalypse.” The year was 2016 and it was a day after Diwali, one of India’s biggest festivals. Mukuta Das, a young woman who lived in Gurgaon in the National Capital Region (NCR) of Delhi, said that it was a dark morning − literally and figuratively − with a thick cloud of smog enveloping the region, so much so that she could “barely breathe”. “I was pregnant at that time,” Mukuta recalled, “and I was really worried what the smoke would do to my health. So I took a day off from work.”

By the end of the day, Mukuta, who worked as a manager in a research agency, had made a decision: she didn’t want to live in such an environment anymore, joining a growing number of families who are choosing to relocate from Delhi and its vicinity to escape the air pollution.

Diwali, also called the festival of lights, is one of India’s biggest festivals. As part of the celebrations, bursting firecrackers is common, the scale of which has grown over the years. Diwali usually falls during the onset of winters and the climate and wind conditions further aggravate the pollution levels. Cities like Delhi are usually engulfed in a toxic combination of smoke and fog (smog) each winter, resulting in a health hazard.

Growing up, Mukuta, who hails from Assam in northeast India, said that pollution − air and water − was “of least concern” to her and her parents. “Now, of course, things have changed a lot there too but not to the extent I had seen in Delhi-NCR,” she said, “On that post-Diwali day, I realised that I did not want to breathe in so much toxic air and expose the ill-effects on my baby. More than anything and one of the basic things that I wanted to provide for my baby was clean air to breathe.”

Tora (meaning ‘star’) was born healthy and happy, but when her first Diwali was around the corner, Mukuta did not want to take any chances. They went away from the city for a small break − a trend she picked up from other parents with small children who had similar concerns. 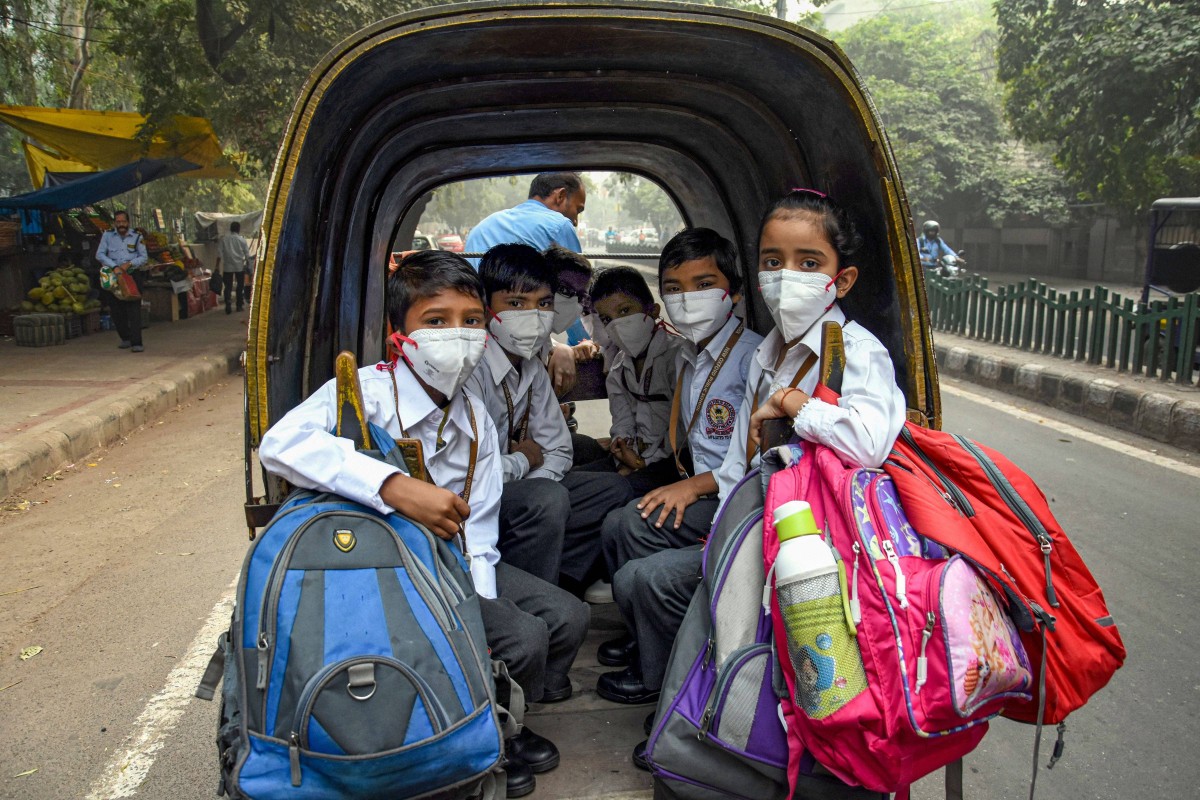 But these temporary measures were hardly the solution and Mukuta and Chandan, her husband, who was working as the marketing director of a university back then, started looking at the relocating option more seriously. There were jobs to be sought after, a new house to look for, a life to be re-built − not an easy decision at all.

But when two-year-old Tora’s paediatrician told them that she would most likely develop signs of bronchitis early on, “a very common problem among children in Delhi and NCR”, the hunt to move became urgent. “We finally moved to Toronto (Canada) last year,” she said. Tora has adapted well to the change, her mother said, both health-wise and socially.

As the air quality in Delhi and its surrounding areas oscillate between very severe, severe, and poor, pollution and the impact of the environment on health have taken the centre stage and families that have the means are taking the exit route.

Also read: An Open Letter to the Supreme Court of India Against Outdoor Air Purifiers

According to multiple surveys, Delhi has among the worst air quality in the world, which also impacts its surrounding regions. Of the total deaths in India in 2017, 1.24 million deaths, equivalent to 12·5% of total mortalities, could be attributed to air pollution, according to a paper released last year by the India State-Level Disease Burden Initiative, published in the Lancet. Scientists have also warned that inhaled air pollutant particles (particulate matter) are moving from the lung to the placentas of pregnant women and if they have an effect on the placenta, this will have a direct impact on the foetus.

The National Capital Region, which includes Delhi and major cities like Gurgaon, Noida, Faridabad, and Ghaziabad, with an estimated population of around 46 million people as per the 2011 Census, is known to attract people for work, at various levels.

Increasingly though, there are people who are opting to leave the region and its pollution, to start a life in less polluted cities in India or even abroad.

Pollution and deteriorating air quality were among the primary reasons why another young couple, Namita Agarwal and her husband, moved from Delhi a few years back. The decision materialised just before their first child was born. “My husband is a sports person so health and a clean environment are always a priority for us,” Namita said. It became an “even bigger issue than it already was” when she became pregnant.

Relocating is never an easy choice and it wasn’t so for Namita and her husband either who too moved out of India, to Italy. Ironically, Italy is among the most polluted countries in Europe, although still better off than Delhi. “My husband’s mother is Italian so, after weighing all our options, we decided to go to Italy for the delivery. It was a big challenge (to move to a different country) and it continues to be so, but honestly, for clean air and clean water, it’s a war I am willing to fight,” she said.

And a war-like situation it is. With people, including little children, wearing masks on the roads in Delhi; those vulnerable advised to stay indoors, and a depressing haze darkening the mornings. In the days following Diwali, celebrated on Oct 27, the Air Quality Index of Delhi stood steadfast in the ‘severe’ category, pushing the numbers much above 400.

Crop stubble burning in neighbouring states of Punjab, Uttar Pradesh and Haryana at this time of the year, along with the bursting of firecrackers during Diwali, vehicular pollution and construction work are said to be the main reasons behind the spike in air pollution and the air quality index oscillating between ‘severe’ and ‘poor’ at this time of the year, every year.

The Environment Pollution (Prevention and Control) Authority declared a public health emergency in the Delhi-NCR region and banned all construction activities till November 5. Schools were asked to close down in that period as well. The prominent pollutant in this period and as it continues to be is PM2.5. These are a fine particulate matter less than 2.5 micrometers in diameter that enables them to easily lodge in the lungs and cause health problems.

PM 2.5 exposure was reported to be responsible for 7.6% of all global deaths in 2015. China and India each had the highest absolute numbers of deaths attributable to PM 2.5.

The National Air Quality Index says that very poor AQI can cause respiratory illnesses on prolonged exposure and severe AQI can affect even those with healthy lungs. Doctors say that an increase in the number of lung cancer cases in non-smokers indicates a link with indoor pollution, among others.

“My son was only eight months old when he had had to take the aid of a nebuliser for the first time for a respiratory problem,” said Nilangshu Nandi who worked in the corporate sector in Delhi but moved out of the city in May 2018 said. He now lives with his wife and son in Bengaluru. “The paediatrician told us that it was a very common problem for young children in Delhi, even newborns and that most parents have nebulisers at home,” he said.

Paediatrician Sudip Choudhury agrees that respiratory problems like asthma, bronchitis, cough, and cold—of different degrees—have become common among children in Delhi-NCR and “the main cause for this is air pollution”. “These problems spike during winters when there is heavy smog, but this time has been exceptionally bad,”  Choudhury of Columbia Asia hospital told Mongabay-India.

Architect Sona Mahesh similarly felt the sting of her five-year-old’s compromised health each time they went for a holiday, away from Delhi where they lived.

“If it was a long weekend, we’d head for the hills; if it was longer, we’d go to Goa or someplace else. It was as if we were just waiting for an excuse to run from the city! Each time we were in the hills or in Goa, my daughter would have none of her stuffy nose or cough problems and we’d feel much better too. It was only a matter of time before we called it quits with Delhi,” Mahesh said. She left her full-time job in an architecture firm in Delhi to move to Goa last year where she now works as a freelance consultant for similar firms. “Money-wise, I have taken a big cut, but there’s no compromising on the health of the family,” she said.

Jobs and lifestyle compromises for health

Like Mukuta and her husband, relocating was not an easy choice for Nilangshu and his wife, nor was it for Namita, Sona, or the many other families who have already made the move or are in the process of doing so. At times, compromises have had to be made in terms of jobs and a trimmed-down lifestyle. “I am compromising my career, my social life, staying away from my family, just so my baby can be safe,” Mukuta, who is now in Toronto, said. Nilangshu similarly said that their move to Bengaluru did not help him “financially” because they had to move “out of desperation”.

Even for families without children, pollution, particularly air pollution, is becoming a driving force to take the exit route from Delhi. Pranjal Deka and his wife, for example, are planning to move to Canada next year. Apart from healthier air quality, easier immigration policies and good career prospects have been attracting young Indian professionals to Canada in large numbers over the last few years.

For Pranjal and his wife, who works with an embassy in Delhi, the tipping point has been the pollution.  “Mainly for its (pollution) effect on our health,” he said, “Both me and my wife have mild bronchitis, which aggravates with the rising smog.” That they did not want to raise a child in an increasingly unhealthy environment, also played a role in their decision-making.

“But the decision has not been easy. Both of us have been in Delhi for the last 13 years and are well-settled in our careers,” he said in retrospect. To move at this stage means rebuilding everything all over again − but Pranjal said it’s a risk worth taking. It certainly is for parents like Nilangshu, whose son has had to use the nebuliser only twice in the past year and a half, as compared to once every fortnight when they were in Delhi.