The government's obsession with blitzing through infrastructure initiatives to extract value by cheapening nature has become the bedrock of a new India. 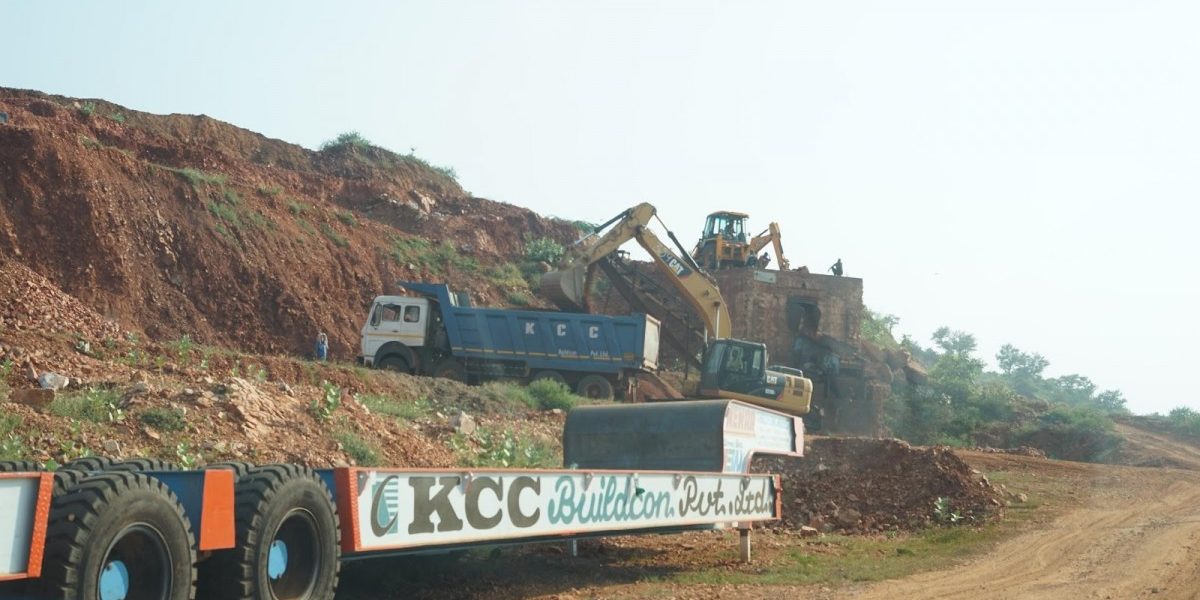 A hill being 'redeveloped' in Pinai village, Alwar district, as part of the expressway's constriction. Photo: Nitin Bathla

The felling of trees in Mumbai’s Aarey forest to make way for a shed for the Mumbai Metro exemplifies the government’s disregard for the environment in its pursuit of economic growth. The people called out Prime Minister Narendra Modi’s hypocrisy, with reference to his comments when he was on the show ‘Man Versus Wild’, and the doublespeak of Union environment minister Prakash Javadekar’s defence of tree-cutting.

Meanwhile, environmental activists have led Mumbai’s civil society in protests dubbed ‘Mumbai’s Chipko Movement’. The police have detained many protestors and the government has resorted to unconventional tactics, such as cutting trees at night.

Even as this issue plays out, another disaster waits on the horizon, threatening to drastically alter the socio-environmental fabric of north, central and western India.

Launched in March 2019, in the run-up to the Lok Sabha elections, the Delhi-Mumbai Expressway is expected to be the largest road infrastructure project in India to date. The access controlled, greenfield expressway – 1,320 km long with eight lanes – is projected to cost about Rs 99,000 crore.

Nitin Gadkari, the Union minister of road transport and highways, said at the launch that the project was the brainchild of a small team of technical consultants, i.e. devised without public consultation. Within six months of the announcement, its construction was already underway. This project – hiding behind the excuse of delivering “world-class” infrastructure – is another attempt to ride roughshod over legitimate environmental and sociological concerns in the name of development.

The primary justification for this mega-bypass connecting Delhi and Mumbai is that it would reduce the cost of land acquisition as it passes through “backward and tribal” districts in Haryana, Rajasthan, Madhya Pradesh, Gujarat and Maharashtra. However, the expressway will also cut through some of the country’s most fragile ecological areas and conservation zones in north and central India. These include the Ranthambore and Mukandra Hills tiger reserves and the Ramgarh Vishdhari wildlife sanctuary, and forests of the Aravalli, Vindhya and Satpura ranges. The project will also pass through countless oran and dev bani – sacred forests that often lack recognition and protection – and affect the catchment areas of many important rivers, and extended ecological areas of the Sariska and Kuno wildlife reserves.

The government’s disregard for socio-ecological stability in these regions is frustrating but its wider economic rationale is cause for worry. Gadkari and the late Arun Jaitely claimed when launching the project that the expressway was just a start and the cost benefits it accrues will be further capitalised by building suburban townships, industrial-logistical hubs and ‘Smart Cities’.

There is little information about the project in the public domain. However, one environmental impact assessment report the National Highways Authority of India submitted for a 240-km stretch passing through Rajasthan, available on the environment ministry website, offers a glimpse of the contractors’ priorities. It contains a lot of words about the project’s economic impact but much fewer assessing the environmental impact of construction, especially considering the stretch passes through the territories of endangered wildcats.

Urbanising such an ecologically important and sensitive area will be detrimental to plant diversity and to the movement of animals of local and national importance.

Set aside the promise of jobs, better wages and economic progress, and the ground situation tells a different story. In discussions with villagers from areas that will be affected by the expressway, we – along with an NGO named KRAPAVIS – discovered widespread social unrest due to unfair compensation, deteriorating livelihoods and social alienation.

(Editor’s note: One of the authors of this article, Aman Singh, is a member of KRAPAVIS.)

The government is offering most farmers Rs 3 lakh or so per bigha, even in Alwar, which is part of the National Capital Region. Its assurance that it would provide jobs has also turned up empty, with contractors involved in the construction refusing to employ locals, preferring to bring in migrants and so prevent unionisation.

The expressway’s design is also a source of concern. It will maintain an average displacement of 15 feet from the ground, creating an imposing physical barrier that has farmers worried that their communities and livelihoods will become divided and also because the expressway could keep groundwater from reaching their fields.

To create the 15-foot-high bed for the 100-metre-wide road, engineers have been exploding and flattening entire hills, and repurposing soil from productive landscapes. A part of the road will pass through the land of large pastoral communities that rely on the ecological commons and access to different parts of the landscape.

In our interactions, farmers asked why the government wanted to build an expressway to develop the area when a canal would do it more. “The land conversion will only help real-estate developers and people looking to invest in real-estate while completely destroying our livelihoods,” one said.

The residents of many farming villages have come together to agitate as well as to mount a legal challenge. The road has been divided into simultaneously developed construction segments so it seems like the project will be completed for many years (much like the troubled Dwarka expressway, which was also relaunched at the same event).

The “not just roads, building a nation” mantra associated with the road transport ministry’s Bharatmala project is perhaps more brazen about the purpose of projects of its nature in general: roads aren’t just roads but are a means to privatise communally owned land.

This obsession with blitzing through infrastructure initiatives to extract value by cheapening nature has become the bedrock of a new India, where the government, businesspeople and corporations are pushing into vital parts of India’s hinterland without paying attention to their socio-ecological consequences. More expressways will also exacerbate air and surface pollution.

All together, Jaitley’s equation of the project to the American motorway system – as harbingers of economic growth – only comes across as more mindless because both projects will have considerably harmed India’s farmers, landscapes, flora and animals.

Nitin Bathla is a doctoral candidate at ETH Zurich and works on ecology and urbanisation in the extended urban region of Delhi. Aman Singh is a member of KRAPAVIS.