'Eight out of 10 children in Delhi-NCR have respiratory problems. After years of discussions, why is there a continuing lack of concern/coordination between multiple government entities?' BJP MP Varun Gandhi said. 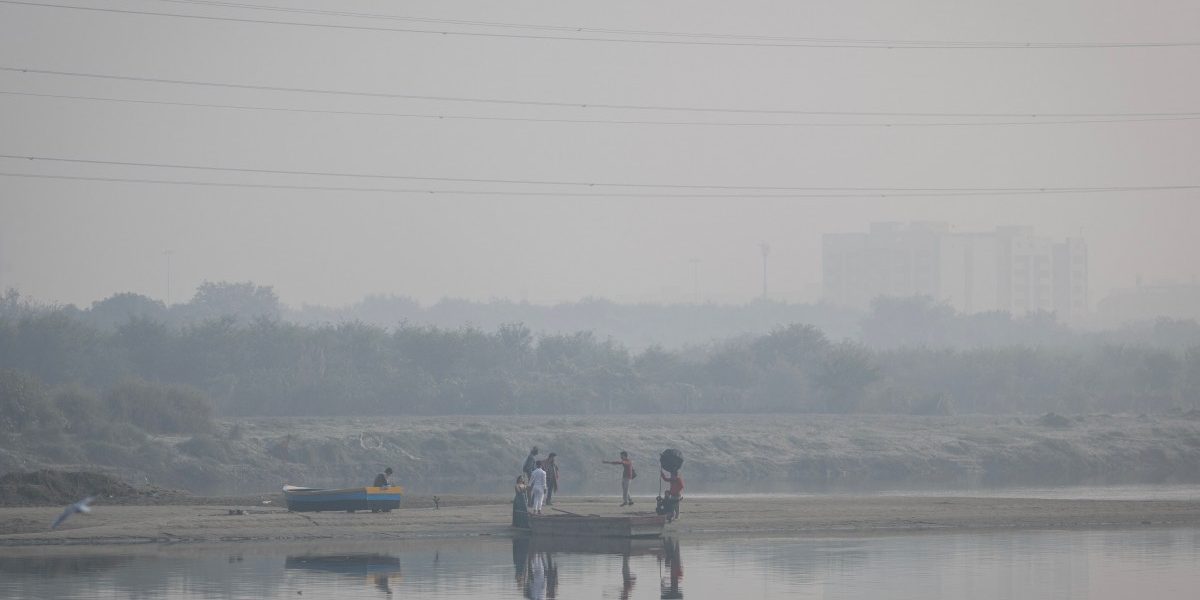 A couple poses during a pre-wedding photo on the banks of Yamuna river on a smoggy morning in the old quarters of Delhi, India November 2, 2022. Photo: Reuters/Adnan Abidi/File Photo

New Delhi: Social media was filled with complaints of serious discomfort from Delhi’s residents as the city’s air quality continued to be in the ‘severe’ category on Thursday, November 3, according to Central Pollution Control Board data.

While the forecasters on Wednesday predicted the air quality was likely to improve on the back of stronger winds, the overall Air Quality Index (AQI) of Delhi stood at 426 at 9.10 am.

An AQI of above 400 is considered “severe” and can affect healthy people and seriously impact those with existing illnesses.

Absolutely poisonous air today. Deadly smog over Delhi. Can’t feel anything but absolute rage at the criminal negligence of our elected representatives at the state and centre. And AAP can’t bicker its way out of this.

BJP MP Varun Gandhi is among those who have questioned the lack of “concern and coordination” among multiple government agencies in tackling the crisis.

“Eight out of 10 children in Delhi-NCR have respiratory problems. After years of discussions, why is there a continuing lack of concern/coordination between multiple government entities,” he asked.

8 out of 10 children in Delhi-NCR have respiratory problems.

After years of discussions, why is there a continuing lack of concern/coordination between multiple government entities?

Is the cost of solving the problem higher than lifetime respiratory care for 46 million people?

Parents and environmentalists, including Vimlendu Jha, demanded schools be closed.

Last 12 hours hv been extremely toxic in Delhi NCR, AQI levels beyond 700 in several parts. Requesting Supreme Court of India to take Suo Moto cognizance of the emergency and take emergency measures. Can any lawyer friend make a mention at the SC today? #AirPollution pic.twitter.com/3d76uFuphI

This is how air pollution looks like in Delhi right now. 😔

While our leaders are busy in elections in Gujarat, people are dying here in Delhi. 😢

Less than 1% of the population in Delhi concerns about it. 99% thinks that this is new normal to live with pollution. pic.twitter.com/wfRk0ly4Sm

The world’s most polluted capital is blanketed in smog every winter as cold, heavy air traps construction dust, vehicle emissions and smoke from the burning of crop stubble in the neighbouring states to clear the fields for the next crop.

Lower temperatures, calmer winds and their changing direction worsen the air quality from time to time.

Delhi Chief Minister Arvind Kejriwal, whose party also rules Punjab where crop burning is rampant, said on Twitter that the “people of Punjab and Delhi are taking all steps at their level” to tackle pollution.

The capital this week stopped most construction and demolition work to curb dust pollution and appealed to residents to share car and motorcycle journeys, work from home when possible and reduce the use of coal and firewood at home.

The burning of stubble, the paddy straw left over after harvesting, is believed to play a role in Delhi’s escalating AQI. As reported by The Wire, stubble burning has now entered its peak zone, with daily average cases of fires since October 28 going above 1,950, according to data compiled by the Indian Agricultural Research Institute.

Punjab reported 3,634 farm fires on Wednesday, the highest this year so far. SAFAR, a forecasting agency under the Ministry of Earth Sciences, had earlier said stubble burning accounted for 32% of the PM2.5 pollution in the capital on Wednesday.

PM2.5 are lung-damaging fine particles that are 2.5 micrometers or less in diameter and can travel deep into the respiratory tract, reaching the lungs and entering the bloodstream.

Transport-level winds blow in the lowest two layers of the atmosphere – the troposphere and stratosphere – and carry smoke from farm fires to the national capital region.

Anand Vihar and Jahangirpuri have emerged the most polluted places in the capital with AQI at 460.