Cyclone Nisarga is expected to make landfall near Alibaug in Maharashtra on Wednesday afternoon. 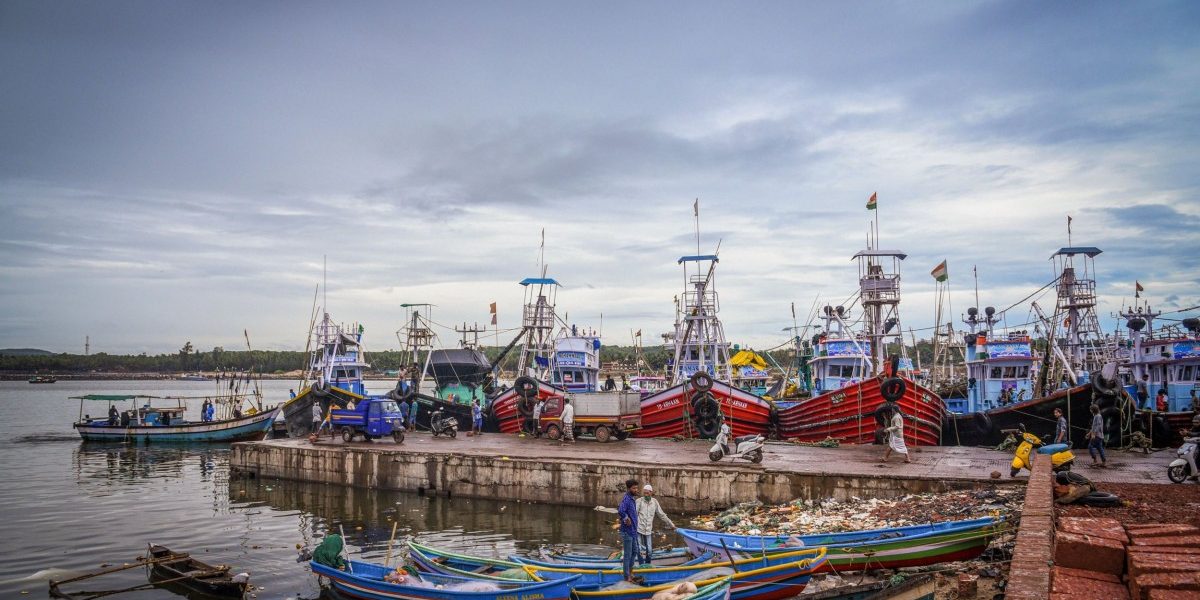 Sometime this afternoon, Cyclone Nisarga is expected to make landfall near Alibaug in Maharashtra, only 45 km south of Mumbai, according to projections by the India Meteorological Department (IMD). Here are 10 important things to know.

1. On June 2, IMD said Nisarga had strengthened from being a cyclonic storm to a severe cyclonic storm. Since the IMD monitors all tropical cyclones between 100º E and 45º E longitudes, other meteorological agencies also use its scale to measure the strength of cyclones in this region of the Indian ocean. And on this scale, going from ‘cyclonic’ to ‘severe cyclonic’ means winds accelerating from 63-88 km/hr to 89-117 km/hr, averaged over three minutes.

Also read: When Climate Change and the Pandemic Collide, a Third Beast Is Born

3. Cyclones are not common in the Arabian Sea. They’re far more common in the Bay of Bengal, which recently produced the super-cyclonic storm Amphan that laid waste to large parts of Odisha, West Bengal and Bangladesh not two weeks ago. The last cyclone of intensity comparable to Nisarga to make landfall near Mumbai was in 1891, according to Adam Sobel, a professor who studies atmospheric dynamics and the climate at Columbia University, New York.

4. According to some sources, Bombay experienced a strong cyclone in 1882. However, many historical as well as scientific studies have failed to find evidence for this event.

5. Scientists have argued the Bay of Bengal produces strong tropical cyclones because it’s relatively shallow and relatively warmer, both conducive to the processes by which depressions take shape. But that doesn’t mean the Arabian Sea can’t produce strong cyclones of its own. Two notable examples from the recent past include severe cyclonic storm 03A, which made landfall in Gujarat in 1998, and super cyclonic storm Gonu, whose trajectory yielded a ‘double-landfall’ over Oman and then Iran. 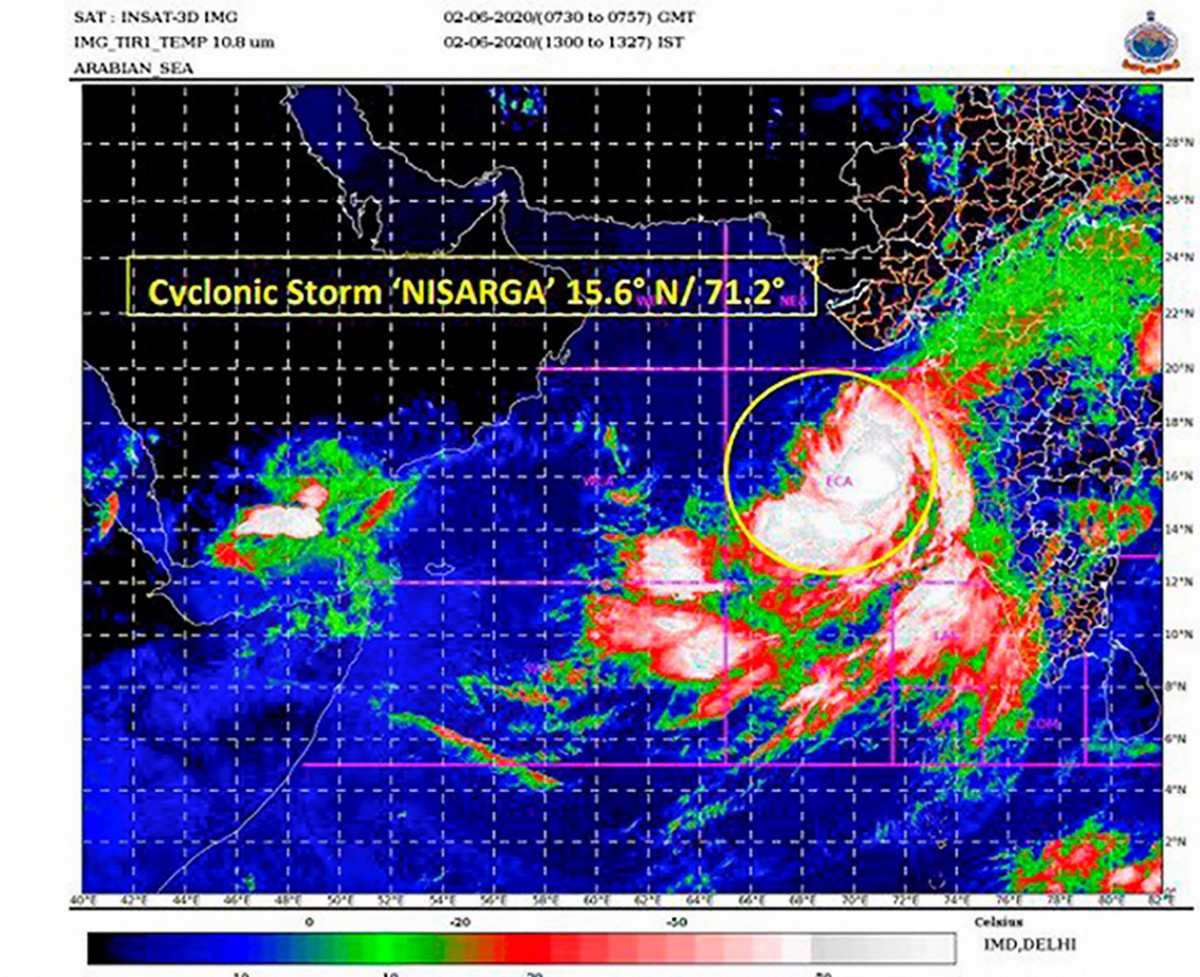 In this satellite image taken from India Meteorological Department (IMD) at 13:00 IST shows a depression formed by Cyclone Nisarga on Arabian Sea. Cyclone Nisarga is very likely to intensify into a “severe cyclonic storm” over the next 12 hours and cross Maharashtra and South Gujarat coast on Wednesday afternoon, the India Meteorological Department (IMD) said on Tuesday. Photo: PTI

6. Every tropical cyclone has a low-pressure centre surrounded by a disc of clouds and winds (moving counterclockwise in the northern hemisphere and clockwise in the southern). This disc is lined with thunderstorms. All cyclonic storms will strengthen as they move over a water-body but rapidly weaken as they move over land, since they lose their supply of water. This is why landfall events are significant.

However, cyclones have a variety of other effects that make them dangerous to human settlements. For example, Priya Ranganathan wrote for The Wire Science, “as their low-pressure centre moves over land, they cause intense storm surges, inland flooding, high waves, wind gusts and very heavy rain.”

7. Nisarga is not (yet) comparable in strength to Amphan, but that doesn’t mean it will be less damaging. For example, Amphan had higher sustained wind-speeds than Cyclone Fani, which made landfall over Odisha in 2019: 215 km/hr versus 240 km/hr. However, Cyclone Gaja had a maximum sustained wind-speed (three-minute average) of only 130 km/hr but virtually shut down Chennai for two weeks in November 2018, after landfall. This is because Chennai had lots of trees with slender or loose branches, many electric and telephone wires still above ground, insufficient options for rainwater to drain, a water-supply issue lingering over from that summer, and – as with most Indian cities – poorly planned and coordinated response protocols in the event of a natural disaster.

Also read: Amphan in the Sundarbans: How Mangroves Protect the Coast From Tropical Storms

8. According to Hindustan Times, local officials have sounded alerts in the districts of Mumbai, Thane, Palghar, Raigad, Ratnagiri and Sindhudurg. IMD has also issued a red-alert over these areas, which means they can expect over 200 mm of rains in the next 48 hours. As a severe cyclonic storm, Nisarga will make fishing in the sea dangerous, flood low-lying areas, dislodge distended branches, topple telephone poles and encourage storm surges that could damage coastal properties. Since Mumbai also has a documented problem with flooding, roads could become unusable for a week or two depending on their topography and alternative drainage options.

9. The strongest winds of a cyclonic storm are registered in the eyewall, the ring of thunderstorms surrounding the eye. However, contrary to what the IMD’s wind-speed scale might indicate, these winds are not uniform. There are occasional periods in which the winds suddenly blow harder than the three-minute average before subsiding.

The shortest bursts are called gusts, and the ones that last for a little longer (a minute or two at a time) are called squalls. The higher the average wind-speed in a storm, even higher the speed of gusts and squalls will be – and they can cause more damage, such as crash unlatched windows and doors against their frames and toss leaves and small branches around.

Gale wind reaching 65-75 kmph gusting to 85 kmph prevails along & off Konkan coast. It will become 100-110 kmph gusting to 120 kmph in the afternoon during landfall time. pic.twitter.com/C3MU0TlPQe

10. As Nisarga approaches Mumbai, the city is also scrambling to contain the spread of COVID-19 within its borders. If important roads and areas become off-limits, supply of sanitisers and face-masks, as well as important drugs, medical hardware and essential items could also be compromised to the city’s, and India’s, detriment.

So as storm-shelters fill up with intracity refugees looking for a roof to sleep under, city officials will have to figure out how they can still practice physical distancing and maintain personal hygiene. Additionally, stagnating water and a high population density could encourage the outbreak of infectious diseases like malaria, dengue, cholera and typhoid that could further hamper the city’s COVID-19 response.