Gaja: When a Cyclone's Wake Is Worse Than the Cyclone Itself

One structural barrier to improving disaster resilience is the fact that Tamil Nadu hasn't held panchayat meetings for the last two years. 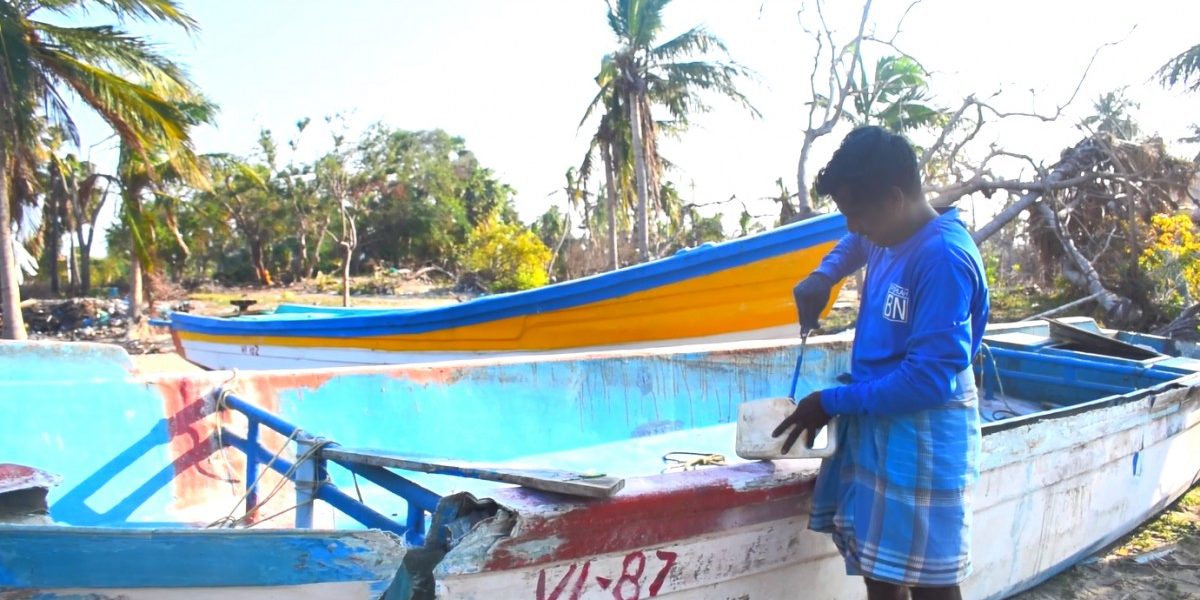 Nagapattinam, Tamil Nadu: On the night of November 15, 2018, thousands of lives on the Tamil Nadu coast were uprooted by the Gaja cyclone. It laid waste to villages in Destroying villages of Nagapattinam, Thanjavur, Thiruvarur, Pudukkottai, Vedaranyam and Cuddalore, among others, and claimed 45 lives.

Apart from damage to houses and the death of cattle, The destruction of crops and marine ecosystems, apart from damage to houses and cattle deaths, were particularly disruptive. In a belt where farmers predominantly grew coconut, mango and tamarind, which take about 5-10 years to mature, people knew getting back on their feet would take a long time after reports that 1 crore had been uprooted.

“At present, our agriculture work has stopped because open water ponds are all salty,” as are all the bore-wells. “Earlier, we would take the fresh water from the ponds to water our fields. Now, to even get one pot of drinking water, I walk two kilometres from my house,” said Selvi Chandra, 42-year-old a farmer who lives in Manalmedu.

The salt producers at Vedaranyam claim sales have fallen by 50%. Women from the fishing community are travelling to distant villages to fetch pots of clean drinking water. The challenges the community faces now is testament to the fact that the wake of a disaster can be just as difficult as the disaster itself.

Vedharajan Balaji, a marine biologist at Thanjavur’s OMCAR Palk Bay Centre, stood with the fishermen on the day of the cyclone, helping them evacuate. Now, Balaji is working closely with the fishing community to find ways to restore normalcy to marine life.

“In the cyclone, a very important part of the ecosystem, the sea grass, which is food for several marine animals, has been uprooted. And that will take at least two years to grow back to the way it was,” Balaji said. “Right now, there is an open sea bed. That’s why the fishermen are facing a hard time. Other sea animals like sea horses, sea bass, etc. have also gone far away.” 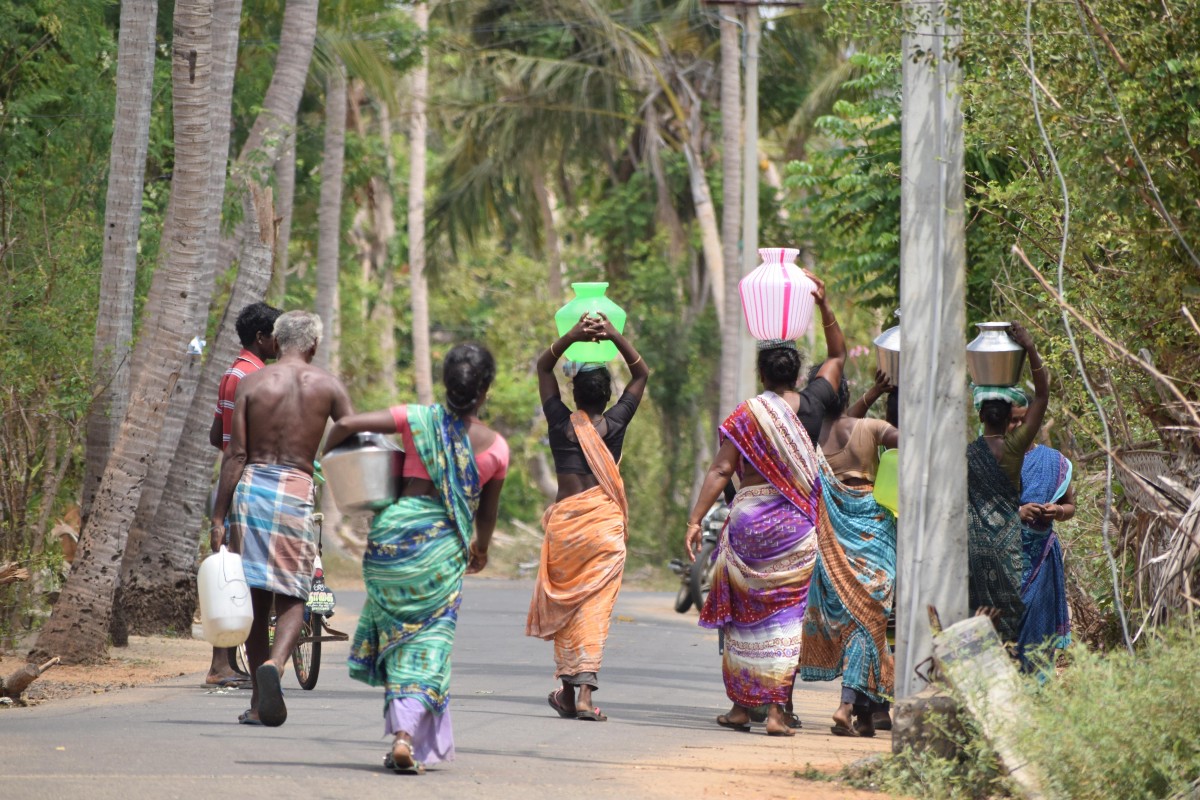 Women carrying pots of water from one village to another. Credit: Aparna Shukla

Kumar Arumainathan, a 38-year-old fisherman from Minavar Colony of Nagapattinam, lives 50 m away from the sea. Thanks to losses and the financial burden he has incurred, he is leaving his village in search of work in Oman.

“The biggest challenge right now for us is to get catch. It’s next to nothing, so we are sitting ducks,” he said. “There’s just too much pressure after Gaja. Since Oman provides work on a contract basis, I’ll be able to take care of a lot of my debts,” including to repair his house.

Malarkudi (58), who leaves at 4 am every day to the harbour to collect fish and sell them at the Nagapattinam city market, agreed the catch had fallen – but noted that demand had fallen as well. “People are spending cautiously. A place where I would easily make a profit of Rs 500 every day is not giving me more than Rs 200 today.”

Getting back on their feet as fishers is hard now because boats have become very expensive.

“I get why people resort to repairs” instead buying a new boat, Arumainathan said. “However, a patched-up boat will always be more prone to falling out when the waves are strong, and even a small leak will take everyone down. So every day, they are risking their lives because there’s no other option.”

D. Karthikeyan, a fisheries inspector, conducted one of the first surveys to estimate the number of damaged/lost boats. He said instead that the government has distributed relief to 90% of the affected fishermen and that the 10% haven’t been able to submit proof of ownership. But even if they come back with papers, “the Nagapattinam district doesn’t have any more funds.

“A lot of fishermen didn’t come when the verification was happening, and now they are suddenly appearing out of nowhere.” 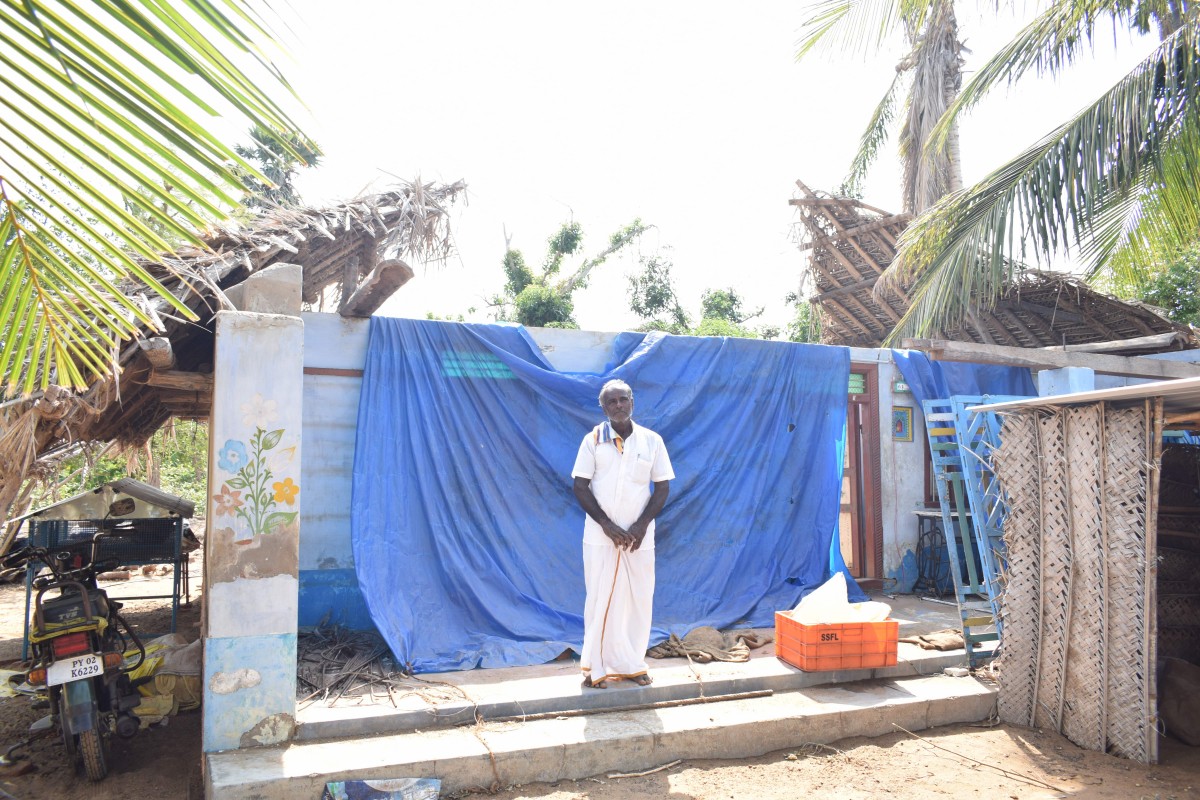 Yakob in front of his house, which was badly damaged by Gaja. Credit: Aparna Shukla

T. Selvarasu, a scientist at the M.S. Swaminathan Research Foundation, Nagapattinam, who has been working closely with the fishing community of the district’s Poompuhar region, said Gaja had done a fine job of highlighting why the community isn’t disaster-proof.

Balaji, for one, said fishermen and their practices have to be managed locally. “Mangroves that are protecting the ecosystems are being uprooted for personal benefit. That needs to stop. Fishermen need to be taught long-term sustainable ways of fishing. For example, the sea grass that mitigates and reduces wave energy, and even the force of a cyclone, should be heavily promoted.”

But now, he makes a little over a tenth of  what he used to, which only covers his food. His son had to be shifted from a private engineering college to a public institute after Gaja.

“We would earlier spend around 5,000 only on food, but now, we can’t afford to do that. We are only thinking about managing tomorrow’s meal, nothing more,” he said. The story is the same in the surrounding villages. 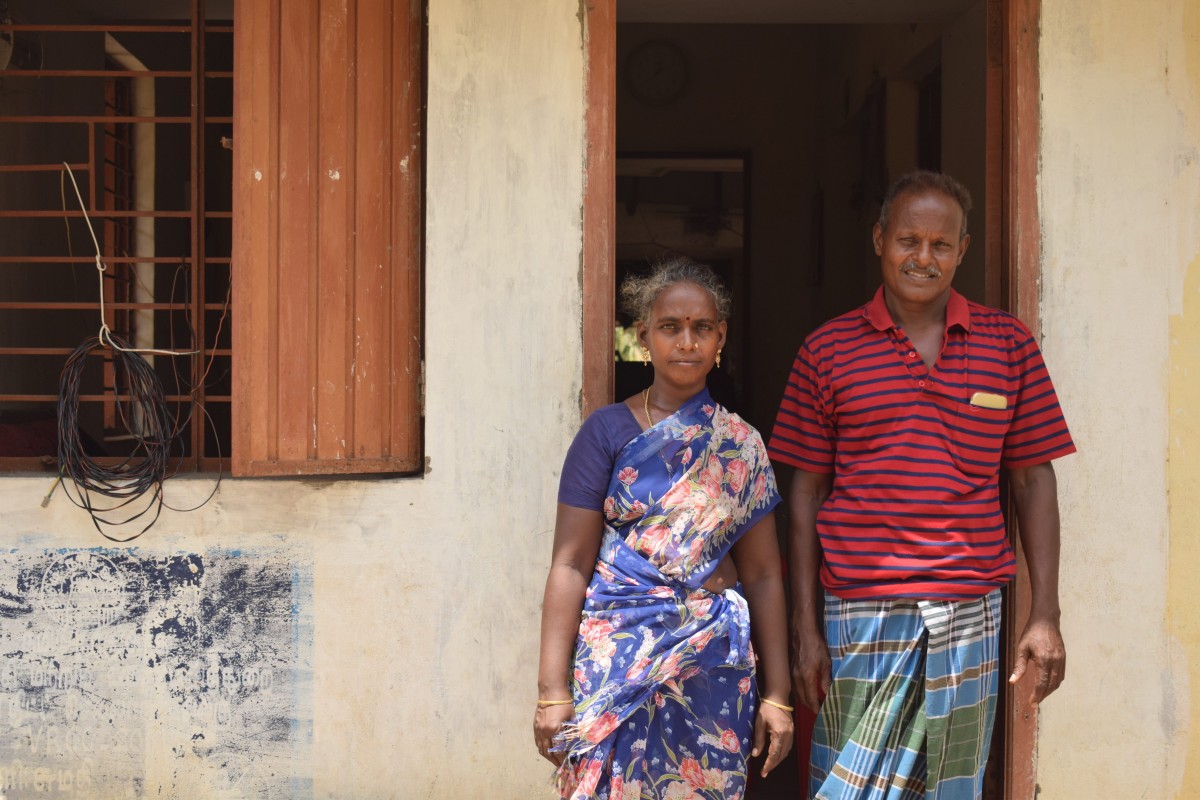 One structural barrier to improving disaster resilience is the fact that Tamil Nadu hasn’t held panchayat meetings for the last two years.

“We need small resource centres at each level, which can give technical support and archive data. At present, we have officers at district level, village level, but who goes to the villages?” R. Manivannan, a project manager from the AVVAI Village Welfare Association, asked. “Because there’s no panchayat system, a block development officer [BDO] has almost 30 villages under him. Will he go around and address the problems of each village? No.”

This in turn is expected to exacerbate recovery.  “The government talks about insurance, but how many will really get crop insurance when so many documents were lost? How will the most vulnerable people like the old, the bedridden, the physically and mentally challenged speak for themselves?”

“Earlier I would speak to the panchayat head and get issues like absence of street lights resolved, but now I don’t know who will get the job done,” said Suresh Kumar, the fishermen community’s head in South Vilundamavadi, Nagapattinam.

Priya Shankar’s toilet broke when the cyclone struck. Without street lights – which she has been complaining about for four months – she now has to walk to another facility half a kilometre away to relieve herself. And “without street lights, my entire area lives in the dark, and I don’t feel safe going out to the toilet at night.” 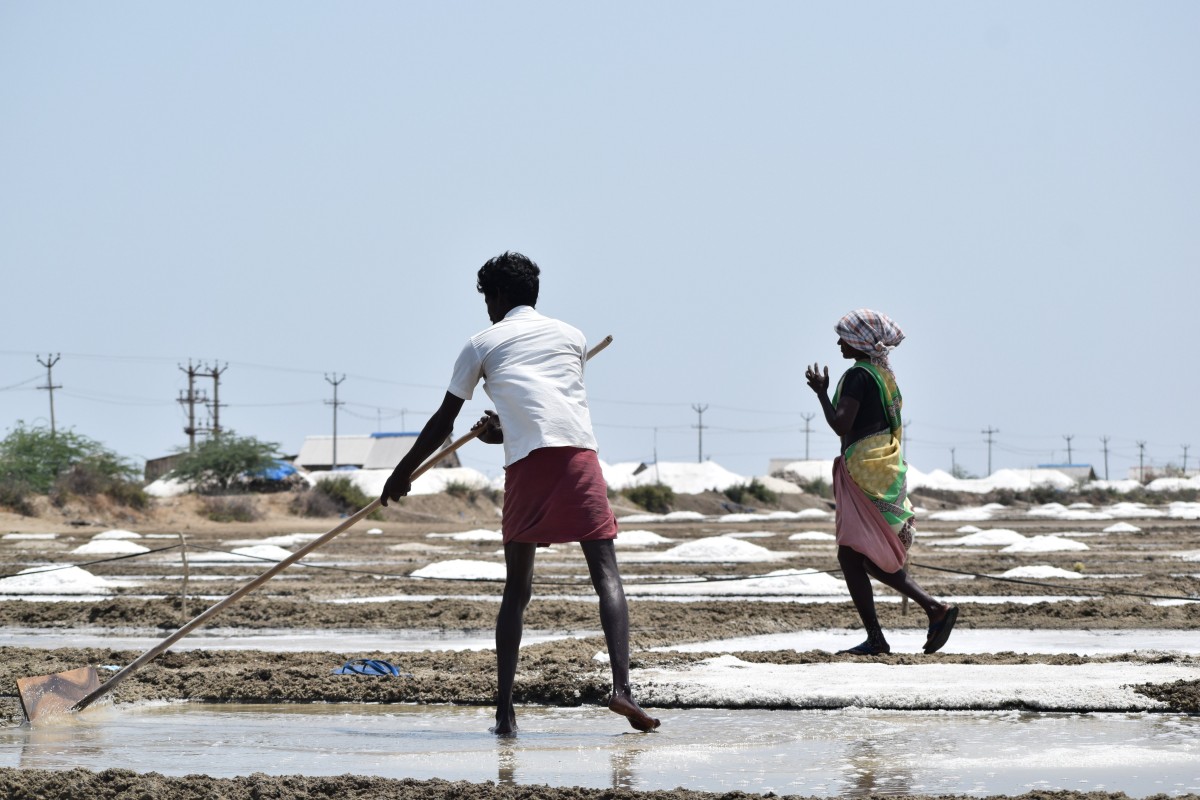 Labourers at a salt pan in Vedaranyam. Credit: Aparna Shukla

Vedaranyam was a major exporter of salt to Karnataka, Andhra Pradesh, Maharashtra and Gujarat. After the cyclone, its supply has been cut to half, according to producers in the area.

N.V. Kamaraj, a former MLA, owns over 50 acres of land and employs 200 labourers. “We were proud of our exports, which provided salt to so many other states. At present, since we are not able to provide enough salt to our own state, there are traders who are importing salt from Gujarat. Earlier, I used to take Rs 1,000 for each tonne but now it’s only Rs 500,” he said.

Poor business means worse prospects for those working directly on the pans. One of them, R. Marimuthu (51), said the state government gave Rs 10,000 to each worker after Gaja. “A mixer to make chutney, a grinder to make idli batter, utensils to eat and buckets and pots to get water from – just these cost that much. The cyclone has destroyed trees that were sown by our ancestors. To get our lives back, Rs 10,000 or even 4-5 years of hard work on the field is not going to be enough.” Marimuthu has five daughters and is the sole breadwinner.

Also read: The Lives of the Salt Harvesters of Thoothukudi in a Warming World

Another worker, N. Veeraiyan (35), from Motandithopu village, said, “Marriages in my house were cancelled, and we don’t have enough to arrange for that again.”

He also said he is yet to receive relief money from the government; according to Kamaraj, the ex-MLA, as many as “60% of the people in Vedaranyam” are yet to.

As a defence, Selvi Baby, assistant commissioner of the state’s Gaja Cyclone Reconstruction, Rehabilitation and Rejuvenation Program, said, “If we just give the money to the community, they will spend it quickly. It’s not necessary that they will use it” to rebuild their houses. “Hence, we have taken the responsibility of construction.”

She also said many Gaja relief activities had to be pushed back by the Lok Sabha elections. “But we are positive that the long term programs that we have planned will have a positive effect.”

However, M. Patiyasheelam, a project manager at a local NGO called Bedrock, said there is no reason to help the state will do a good job. “Vedaranyam has over 40 villages; 70% of these were non-concrete houses, so a total washout was inevitable. But at present, out of a 1,000 houses, only 20 are being rehabilitated.”

This article is a part of the Climate Change Resilience initiative by the Earth Journalism Network.

Aparna Shukla is a freelance journalist.