Cyclone Amphan: After Night of Darkness, a Morning of Untold Devastation

While power cuts and raging winds marked Wednesday evening for most in south Bengal, with Thursday came the rude shock of discovering that eastern India's oldest city had been rendered unrecognisable. 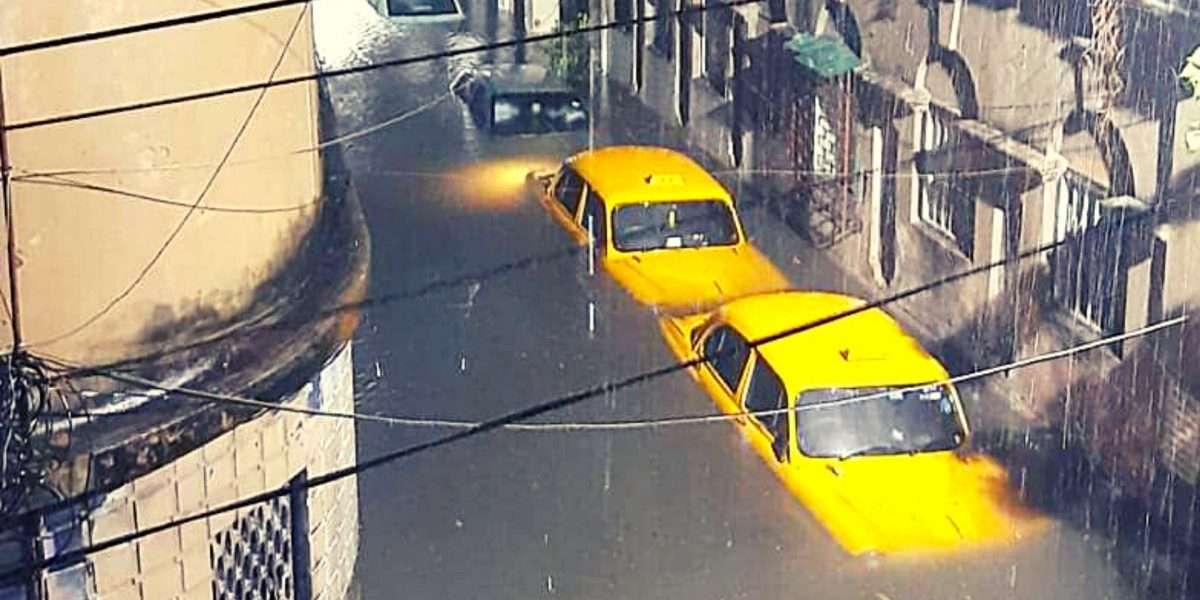 Kolkata: On Wednesday evening, the extremely severe cyclonic storm Amphan pounded Odisha, West Bengal and Bangladesh, leaving untold devastation not only in parts which had braced for it, but also in areas that were quite simply, unprepared.

It is not an exaggeration to say that barring the ever-alert India Meteorological Department, few in Bengal had foreseen the extent of damage that cyclone Amphan was capable of causing.

The city of Kolkata itself has had far less reason to reckon with the spectre of natural disaster than the parts of Bengal which lie to its south; Odisha, a state whose storm preparedness is the stuff of international news; and also Bangladesh, which by Wednesday morning had noted that the damage would be extensive and would affect even the Rohingya camps, even though Cox’s Bazaar did not lie in the path of the cyclone.

Kolkata and Howrah, two cities on either sides of the Ganga, had been convinced that the storm would weaken by the time it reached them – as had happened with last year’s Fani and many, many times before. The Sunderbans, which is forever in the path of damage and in a mark of grand administrative failure, is still reeling from the devastation of Aila, would bear the brunt, it was thought. 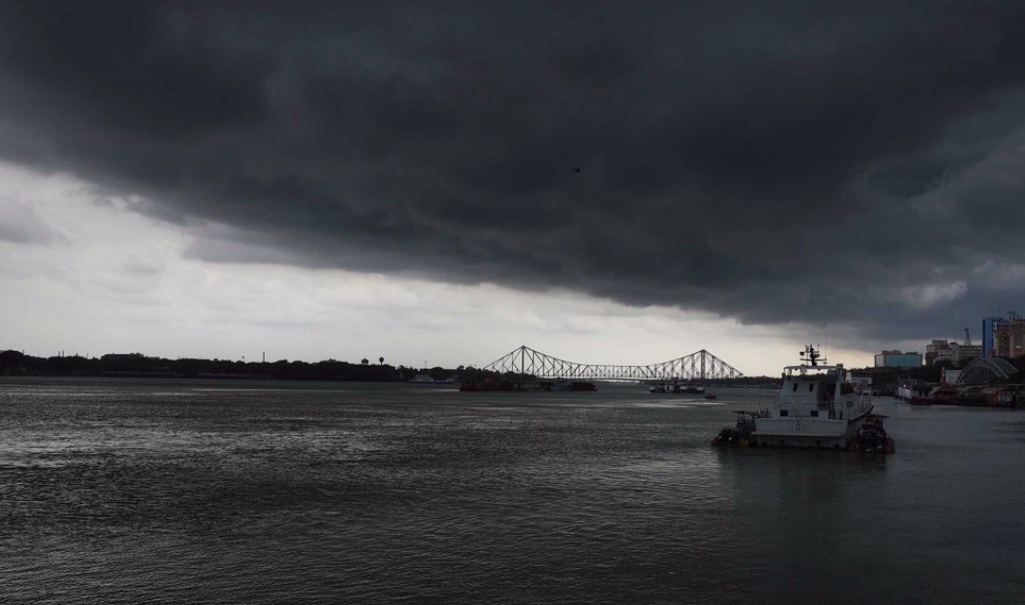 So when the winds rose to 105 km per hour well before the storm passed through one of eastern India’s biggest cities, the shock was cold and the dread, unprecedented.

The trail of devastating of #CycloneAmphan in Kolkata. Trees toppled and fell on electricity transformers causing a scary situation. Power outages have been reported from many parts of the city pic.twitter.com/3uQ22A8Ssd

Amphan barrelled out of the Bay of Bengal, onto land that lay between Digha in Bengal and Hatiya in Bangladesh, with gusting winds of up to 185 km per hour and a storm surge of around five metres.

As it made its way towards the city, the sound of the winds grew into a persistent wail. The storm was to pass through Kolkata between 5.30 pm and 7.30 pm, but by 4.30 pm, traffic signals and trees had already began falling across roads, cutting off entire thoroughfares.

On live television, reporters of Bengali news channels struggled to make themselves heard over the wind and rain. Yet at around 5 pm, at least, only two national English news channel focused on Amphan.

National news’s lack of attention to three million people in danger, as many have noted on social media, was sadly consistent through the evening.

In Kolkata, however, there was no way of knowing this – shortly after 5 pm, most parts of the city plunged into darkness as power was cut off.

What followed was ritual. Difficult as it is to gauge citywide damage from a room which has its doors and windows shut, the storm nonetheless offered everyone with a shelter above her head a cruel and precise idea of the extent of devastation elsewhere.

By 6 pm, as the winds blew in strong rain from the east, the insides of houses with windows in the way were more or less flooded. Over WhatsApp, photos of shattered windows, blazing live wires, dangerously swaying lamp posts and urges to conserve phone batteries were exchanged until connectivity itself proved elusive.

As if the lockdown was not enough, now #CycloneAmphan ravages College Street 😢 pic.twitter.com/F7QFFMw1L5

It is tough to forget at such times, how old Kolkata is.

As a city, it has for long revelled in architectural ruins, and although the municipal corporation’s list of highly dangerous dwellings caps the number of such houses at 300, there are around 2,500 more that were labelled ‘insecure’. That older houses with crumbling bones are particularly susceptible, is anyone’s guess.

It is not just the buildings: in the last 10 years, the city has lost most of its young population to jobs across India.

While the poorer of them have struggled to return home in the lockdown, the comparatively well-off noted across social media through Wednesday evening how their ageing families were struggling to deal with the storm.

Only very early on Thursday, thanks to choppy mobile data connections, did it emerge how deeply in trouble we were.

Bengal chief minister Mamata Banerjee said at least 10 people had died in the state, and that the 24 Parganas (North and South) districts had been completely battered. By the time it was late afternoon, Banerjee had said at her press conference that the toll rose to 72. 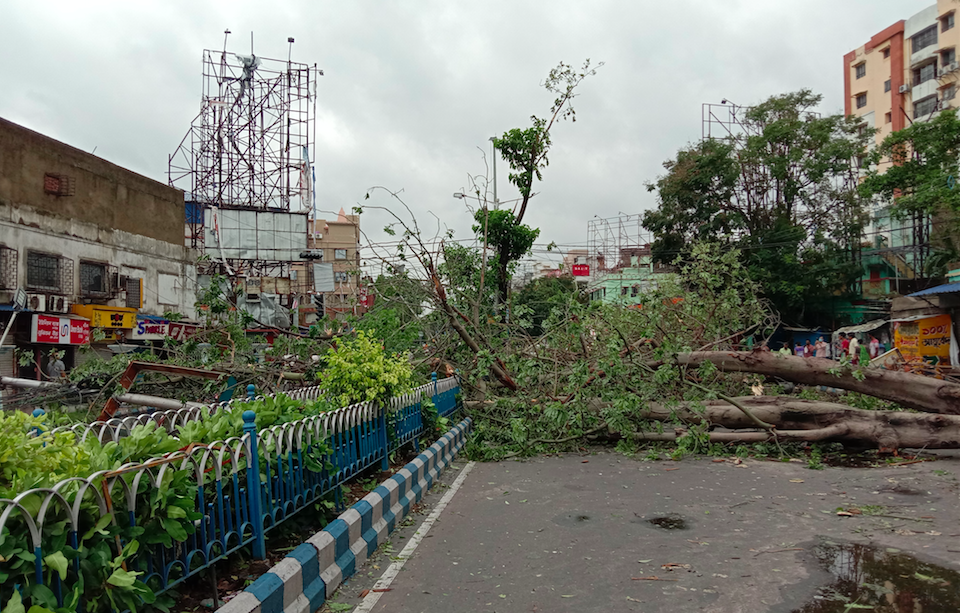 A road connecting East Kolkata Township to South and Central Kolkata, blocked due to a tree which fell during Cyclone Amphan. Photo: The Wire

“Area after area has been devastated. Communications are disrupted,” Reuters reported Banerjee as having said, adding that although 500,000 people had been evacuated, the state authorities had not entirely anticipated the ferocity of the storm. While a man and a woman were killed when trees came crashing down on them in North 24 Parganas district, a 13-year-old girl died in a similar incident in adjoining Howrah.

As NDRF and local administration begin rescue attempts, it has emerged that three persons have died in Hooghly and North 24 Parganas districts due to electrocution. A woman and her seven-year-old son were killed in the Regent park area of Kolkata after a tree fell on them.

Thatched houses were all but blown away, low-lying towns and villages were swamped. Kolkata’s oldest thoroughfares were dramatic in their waterlogging, entirely submerging yellow taxis. Information trickling in through WhatsApp groups reflected pictures of absolute devastation in the many slums that make the city.

The shattered windows of high rises in the East Kolkata township and the southern part of the city had their own story to tell. 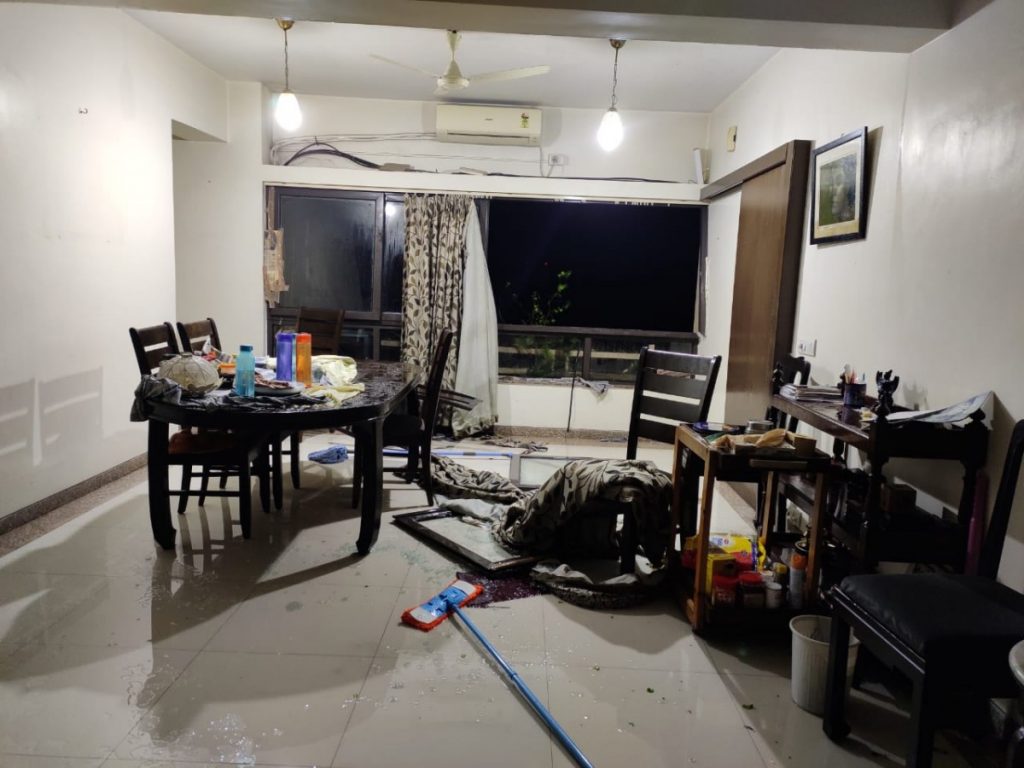 The living room of a residence on the 27th floor in south Kolkata, in the aftermath of Cyclone Amphan. Broken glass and window panes are visible. Photo: By special arrangement

The deltaic embankments of the Sunderbans, have likely given away, although there has been no assessment yet – that process alone could take an entire day. On the Sundarbans’ Ghoramara island, resident Sanjib Sagar told Reuters that several embankments surrounding settlements had been damaged, and some flooding had started.

In Bangladesh, at least seven persons, including a six-year-old boy, were killed, in addition to widespread damage, especially in Noakhali district. 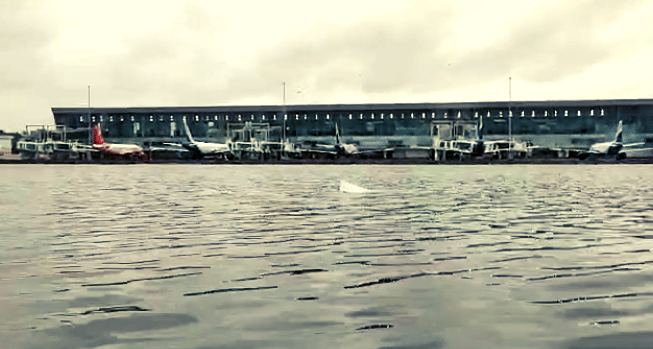 Screenshot from a video that is being shared multiple times on social media shows the Dum Dum Airport in Kolkata, submerged.

Mrutyunjay Mohapatra, India’s chief meteorologist, has said that the next 24 hours are crucial. The clouds over Kolkata hang low, driving home the point. Driving anywhere, however, is an impossibility. There is hardly any road in the city that is not blocked by a fallen tree.

Banerjee was not exaggerating when she said the impact of Amphan was “worse than the coronavirus”. But the Calcuttan is loathe to disregard the new ‘rules’ of life.

Masked men and women hack at tree branches to make way for cars, and at crossroads traffic policemen in rubber gloves ask to keep off the flank of the road where a traffic signal has collapsed and wires lie exposed. On the roads, people lean against horizontal tree trunks and recount last evening’s ordeal to other people standing in physically distanced circles. 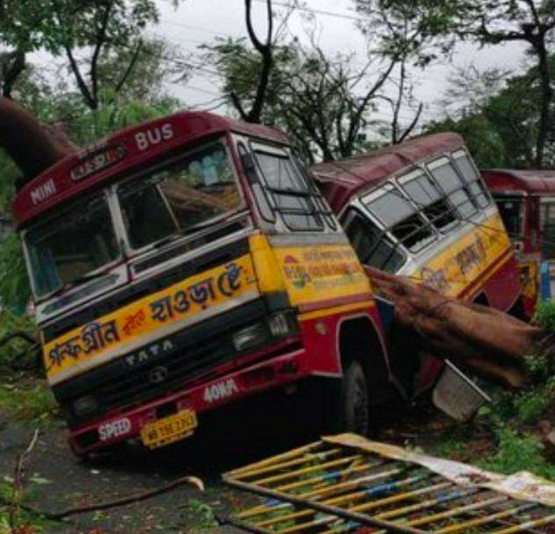 A mini-bus, damaged after a tree fell on it as Cyclone Amphan passed through Kolkata. Photo: Twitter

Bengali literature and art recognises the storm and its ability to wring change out of immobile situations.

It is a recurrent presence in the works of Amitav Ghosh, a Bengali writer of global renown, who himself experienced a journey through the eye of a storm in 1978 Delhi. In Satyajit Ray’s iconic Pather Panchali, Apu’s life begins per se when a storm batters his house.

There can be no doubt that the change Bengal needs now is one which marks a shift in the relationship between the Centre and the state.

The health crisis has seen a fair bit of Mamata versus Centre, but now, the chief minister’s plea to bury politics rings clear. Far more essential than probes into why a prime minister took so long to tweet on the devastation that has affected states ruled by opposition parties, is aid.