Bengal, Odisha and parts of Bangladesh have all conducted massive evacuation operations. 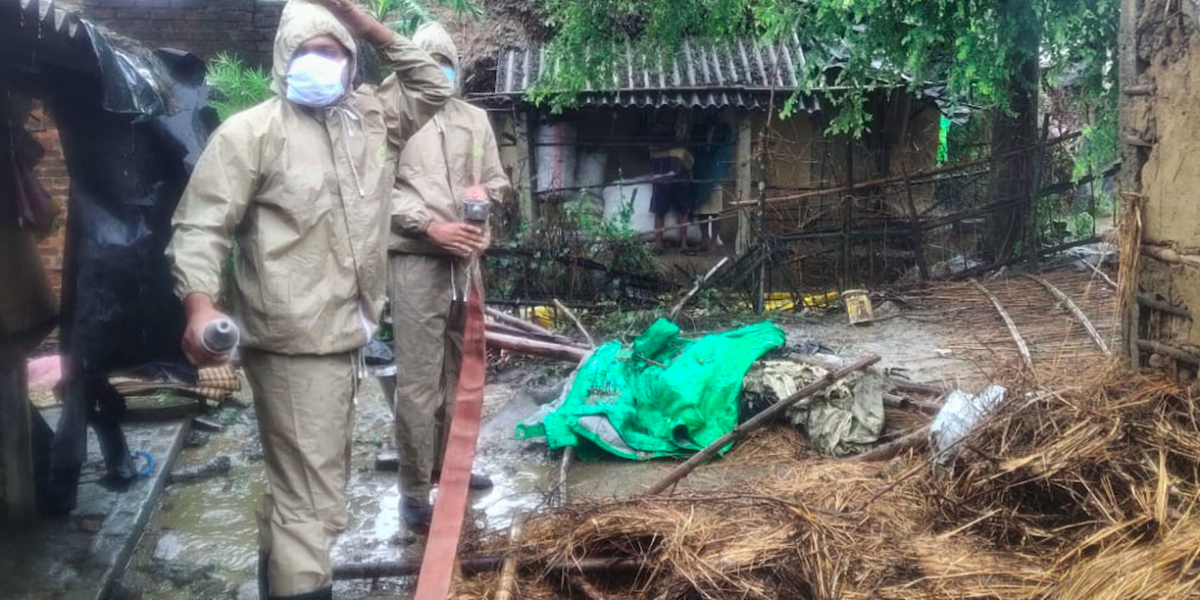 Firefighters gather at the spot where a thatched house collapsed due to heavy winds and rain ahead of cyclone Amphan landfall, at Baralapokhari under Charampa GP in Bhadrak district, Wednesday, May 20, 2020. Photo: PTI

The Wire Staff
Environment
Government
20/May/2020

New Delhi: The landfall process of the extremely severe cyclone ‘Amphan’ began at 2.30 pm on Wednesday, May 20, between Digha in West Bengal and Hatiya island in Bangladesh. According to the India Meteorological Department, will continue for four hours.

“The forward sector of the wall cloud region is entering into land in West Bengal,” the Met office said.

The intensity of the cyclone near its centre as the landfall process started was recorded at 160-170 kmph, gusting to 190 kmph, it said.

Heavy rain and gale wind have affected several districts in the Gangetic West Bengal since morning and the intensity of the downpour and wind increased gradually with every passing hour.

West Bengal: National Disaster Response Force (NDRF) personnel clear electricity wires and uprooted trees off the road between Digha in East Midnapore district and Odisha border. The landfall process of #CycloneAmphan commenced since 2:30 PM, will continue for about 4 hours. pic.twitter.com/IKZ1QE3Gr1

The system is likely to move north-northeastwards after landfall and pass close to Kolkata in its eastern side causing extensive damage and flooding of low-lying areas of the city, the Met department warned. 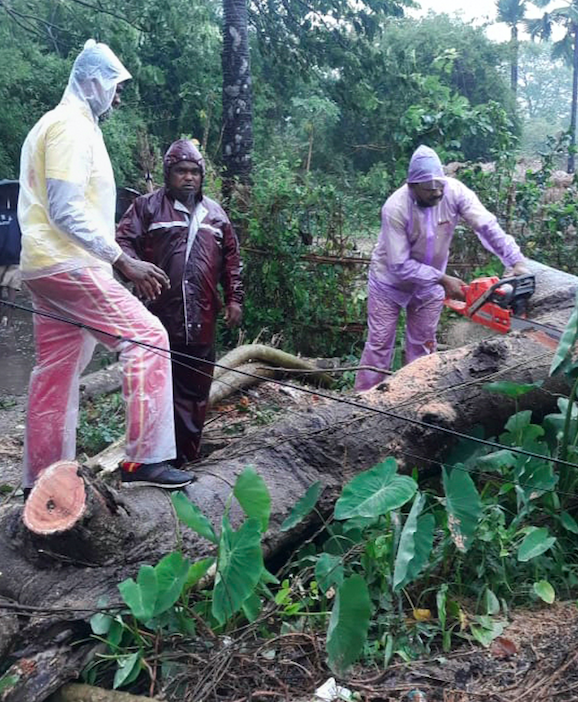 More than 1.25 lakh people have so far been evacuated from low-lying coastal areas and the process of evacuation was still underway in some places like Balasore on Wednesday morning, Special Relief Commissioner (SRC), P.K. Jena, said

The cyclone is likely to move north-northeastwards across northwest Bay of Bengal and cross West Bengal Bangladesh coasts between Digha (West Bengal) and Hatiya Islands (Bangladesh) close to Sunderbans during evening hours of Wednesday, with a maximum sustained wind speed of 155-165 kmph gusting to 185 kmph.

The system is being continuously tracked by the Doppler Weather Radar (DWR) at Vishakhapatnam, Paradip and Gopalpur, he said.

Jena said Paradip recorded 214 mm of rainfall since Tuesday, while it was 87 mm in Puri, 70.5 mm in Chandbali, 58.5 mm in Balasore and 50 mm in Bhubaneswar as heavy downpour battered many parts of coastal Odisha.

People living in thatched, mud and ‘kucha’ structures are being persuaded to move to the cyclone shelters for their safety, he said, adding that many people were initially reluctant to shift in view of COVID-19 scare.

While a thorough assessment of damage caused by the cyclone will be made, there are reports of many trees being uprooted from different areas including Erasama and Paradip in Jagatsinghpur district.

Many betel vines have also been damaged in Dhinkia area of Jagatsinghpur district, the SRC said, adding response teams have been deployed in all the coastal districts to ensure quick restoration of power and road communication wherever they suffer damage.

Video from Digha, West Bengal. Super cyclone Amphan just about to have a landfall. pic.twitter.com/fDltZKgSC2

The impact of Amphan will remain in the state till the afternoon, he said, adding that the wind speed in some places is expected to reach 100 kmph to 110 kmph gusting to 125 kmph in northern coastal parts of Jagatsinghpur, Kendrapara, Bhadrak, Balasore and Mayurbhanj districts during the period.

A report from Bhadrak district said many trees and electric poles were uprooted in the district under the impact of gusty winds and heavy downpour, blocking roads in several areas.

Reports of trees and electric poles being uprooted and ‘kutcha ‘ houses being blown away are coming in from various parts of the district. However, there has been no major damage to life and property so far.

“The wind speed is picking up. The trees have got uprooted…However, we are feeling safe inside the cyclone shelter building. However, it is jam- packed. As a result social distancing to contain the spread of coronavirus is not being maintained here”, said Pradyot Giri, who has taken shelter at Bagagahana multi-purpose building in Rajnagar tehsil. Amphan is considered to be the second major cyclonic storm in the Bay of Bengal after the Super Cyclone of 1999 which had claimed around 10,000 lives and inflicted large scale devastation in Odisha.

The cyclone comes a year after Fani barrelled through vast parts of Odisha on May 3, claiming at least 64 lives and destroying power, telecom and other vital infrastructure.

Bangladesh’s disaster management officials told Reuters that the effort to evacuate about two million people from coastal areas as Amphan approached from the Bay of Bengal was challenging.

“It has been challenging to evacuate people while maintaining distancing. We have doubled the number of the cyclone centres to ensure safe distancing and hygiene,” said Enamur Rahman, the junior minister for disaster management.

Officials said they feared standing crops could be damaged and large tracts of fertile land washed away. Farmers were being helped to move fresh produce and livestock to higher ground.

“Fortunately, the harvesting of rice crop has almost been completed. Still it (the cyclone) could leave a trail of destruction,” said Mizanur Rahman Khan, a senior official in the agriculture ministry.

Bangladesh officials also said they had moved away hundreds of Rohingya refugees living on a flood-prone island in the Bay of Bengal to storm shelters.

“Though forecasts show that the Rohingya camps are not in the cyclone’s direct path, aid workers said the storm still posed enormous risks for the Rohingya refugees, who have been sheltering in Bangladesh since 2017 after fleeing violence and persecution in neighbouring Myanmar,” New York Times has reported.