As Kaziranga Expands, the Fate of Grazing Communities Hangs in the Balance

The sixth addition of Kaziranga National Park, situated in the northern bank of Brahmaputra, is raising fresh fears of eviction. 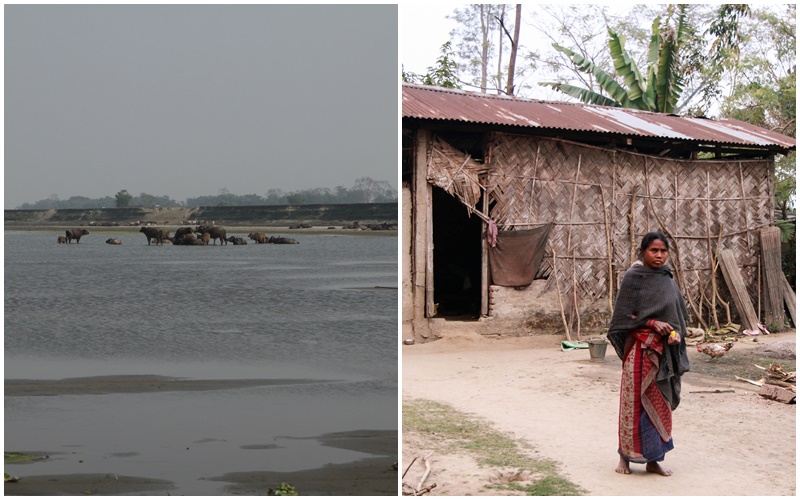 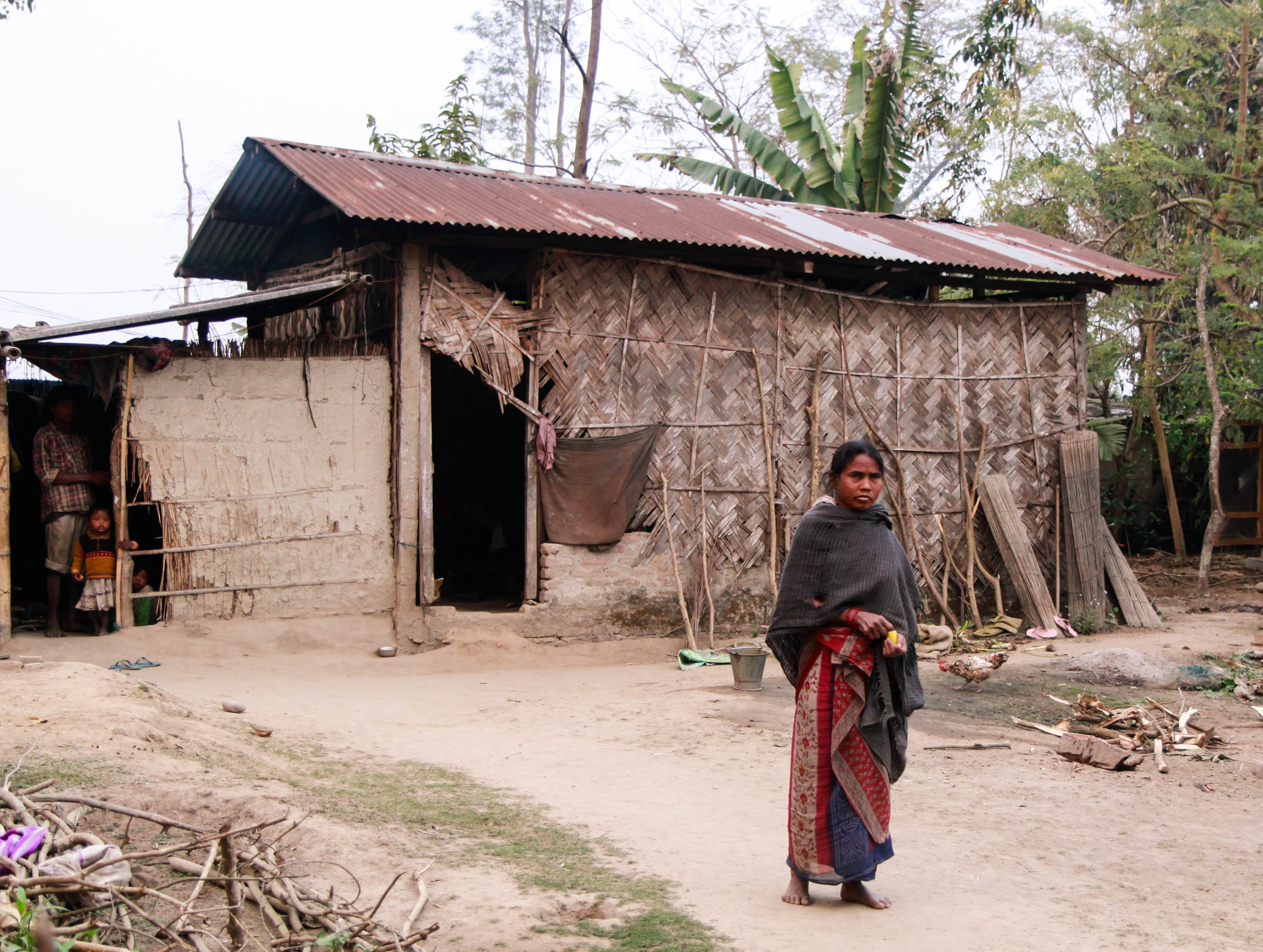 A temporary kuthi of the cattle herders. Credit: Eleonora Fanari and Pranab Doley

Bars of sand with fluttering grass, ribboned out by small watercourses, buffaloes and cows scattered all over merge into the green grass spread across terrain framed by a smoky winter sky. Numerous bicycles with jerry cans clinking in non-existent trails as they try to overtake each other to collect their share of milk from herders. Fishermen slowly follow in the silence of the flowing waters, struggling for a good catch in the river where imaginary boundaries stop them. The last to venture out are groups of women off to collect firewood and grass for their daily use.

This is the picture that unfolds in front of you on a normal day in the ever-contested lands of the sixth addition of Kaziranga National Park (KNP), situated in the northern bank of Brahmaputra.

The picture was different on February 12, 2018. There was a bulldozer breaking down the kuthis (temporary bamboo huts) and the sheds for cattle.

Indiscriminate eviction took place in the eight-nine kilometre stretch from Kathanibari, Kumurakati up to Silamari, in Bishwanath district. The villagers who were in their kuthis to attend to their cattle on that day have recorded cases of harassment and torture of children and elderly persons alike. This action was preceded by the poaching of a rhino that took place a few miles away from the scene just two days earlier on the night of February 10, 2018.

The villagers looked from afar helplessly as their sheds and huts vanished. “They are not willing to listen to us and (are) not even allowing us to collect our cattle, all of the new-born babies will die and many adult buffaloes will enter the forest of Kaziranga which we will never get back,” cried out an old man.

Another said “this is the only means of livelihood we know; without our livestock we will die”.  They remained huddled together as some young men incessantly spoke on the phone to unknown destinations hoping from some respite from somewhere. By the end of the day, about 70 settlements were demolished.

“I was born in this land, my forefathers grazed cattle here and moved around with his buffaloes”, another old man said.

The area under eviction has been traditionally used by cattle grazer families prior to independence, wherein permission for grazing was given by the government to the cattle-rearing families. The conflict exacerbated from around 1985, when Kaziranga decided to expand its boundaries to the northern bank of the Brahmaputra river. However, some old villagers recollect that rumours of expansion of the park started already from the 1970s, just after the implementation of the Wild Life Protection Act, 1972. 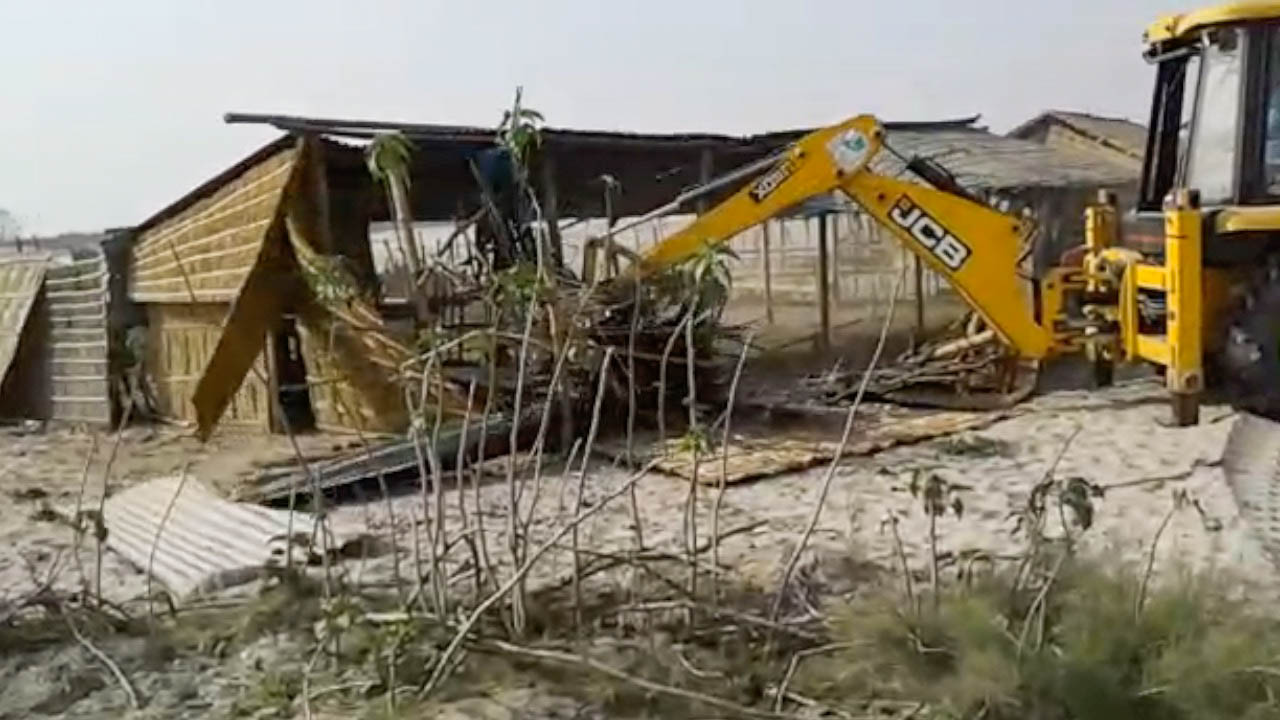 The notification to include the north bank of Brahmaputra under the KNP came out only in 1986, and it comprised the sand bar islands (chapori) and the banks, the mobile stretch of land that gets repeatedly reshaped by the endless movement of the river. These fertile green areas represent an integral part of the rural economy for grazers, farmers and fishing communities, and are considered vital for the survival of more than 10,000 families. The proposal was, therefore, immediately challenged by the locals who, due to the non-compliance of the authorities, filed a petition in 1994 appealing against the inclusion of this area under Kaziranga.

The matter went into litigation and the process of claims and counter-claims continued for more than a decade when on November 21 and 22, 2002, the Gauhati high court, under Justice Ranjan Gogoi, announced a state of hold with a direction to ‘determine the rights of occupants (petitioners) in the notified area and till such determination is made the authorities were directed not to disturb the possession of such lands’.

However, the area was illegally notified in 1999 with a notification declaring an area of 37,600.00 hectares under the sixth addition, while the judiciary was still to decide on the fate of the petitions by the people for their constitutional safeguards.

The level of harassment and violence has escalated through the years, said grazers, and in 2006 they filed another petition. This time, too, their voice was silenced. In 2013, the judge declared that “no illegality has been committed in proposing to evict the encroachers of forest land”.

Denied of rights to their land and in a setting of multiple contradictions, many of the dwellers using the chapori land for cultivation still pay user taxes to the revenue department. “When my land got eroded, I wanted to renounce it. However, the revenue department encouraged me to continue paying the taxes on the claim that the land will soon re-emerge and could again be used. However, when the land re-emerged, Kaziranga reclaimed it,” says Orang, a villager from Kathonibari village. 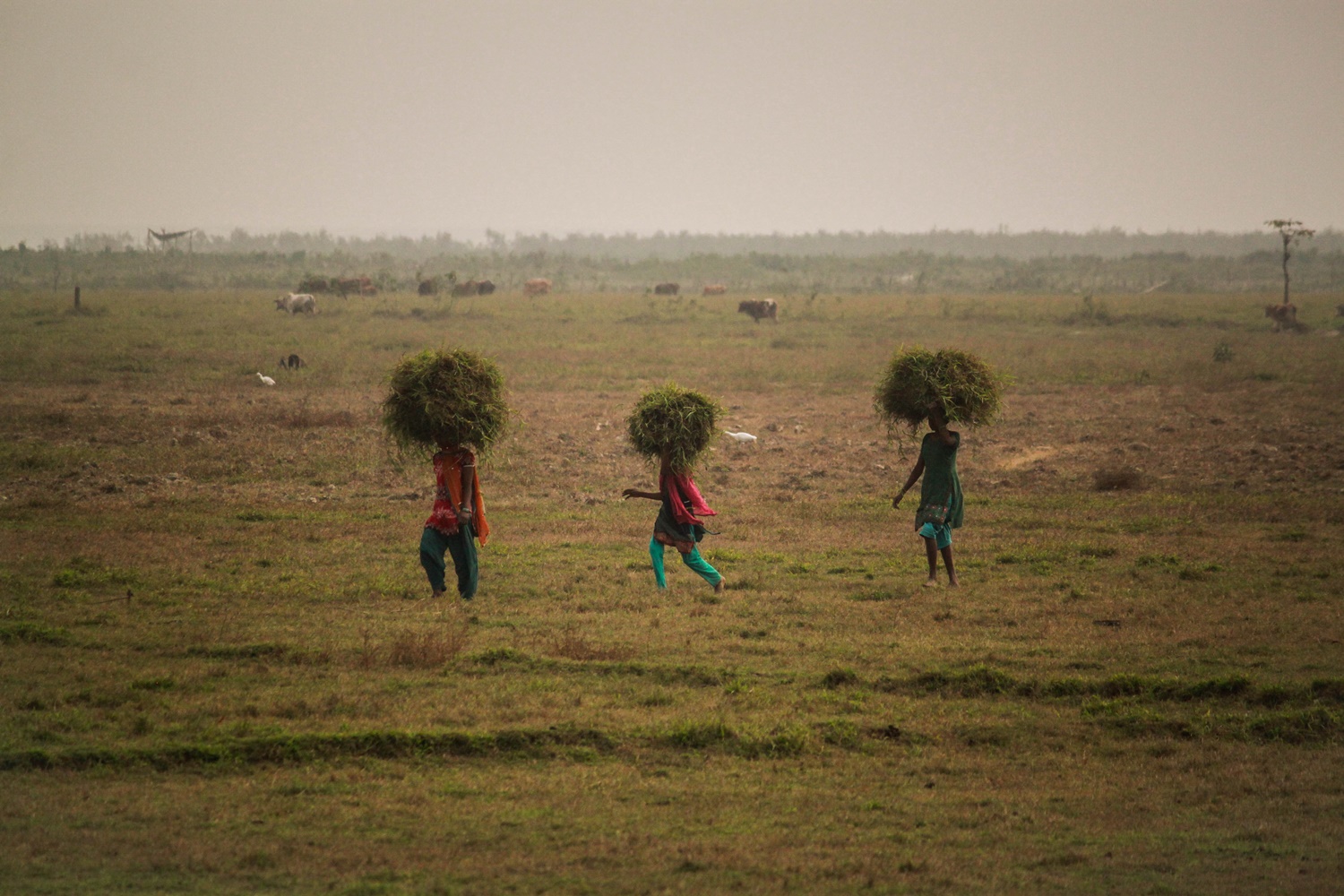 In an environment of denial and hatred, in 2012, the Gauhati high court, under chief justice K. Sreedhar Rao, took up a suo motu cognisance on the basis of newspaper reports about rhino poaching in Kaziranga. In 2015, the public interest litigation culminated with an order of eviction of the Scheduled tribes and traditional forest dwellers from the second, third, fifth and sixth addition, without recognising the existence of villagers in the north bank of the river, notified as the sixth addition. As a result of the order, villagers were forcefully evicted from the Bandardubi area, on the fringes of Kaziranga, leading to police firing that killed two innocent villagers.

The tension and pressure has constantly been increasing and today the eviction from the contested sixth addition areas has become a norm.

Poaching an excuse to evict people

As is clear from the 2015 high court order, poaching is often used as an excuse to evict families. It was the same this time as well, as the event followed the news of a rhino being killed on February 12.

Following news reports of rhino poaching, the governor of Assam, Jagdish Mukhi, asked the law enforcing agencies to take all measures to stop rhino killings in Kaziranga, declaring that “the indiscriminate killing of the rhinos by the poachers is not only an attack on the creature, it is an attack on the pride of the state”.

On the same day, the forest minister of Assam, Pramila Rani Brahma, rushed to the area and arbitrarily ordered eviction of the kuthis from the chaporis, without any consideration for human rights, or the need to issue notifications, and without any order of eviction in place. She also made an allegation about the involvement of forest officials in poaching, bringing into doubt the real reasons behind the eviction.

When asked, the villagers proudly said that they were caretakers of the rhinos and if it wasn’t for their community’s vigilant efforts, none of the rhinos would survive. The crowd also alleged a link between poaching and the forest department, saying that ‘without the forest department’s support, no poaching could take place’. The scapegoats, according to locals, are often the innocent people living on the fringe of the park to cover up illegal actions. 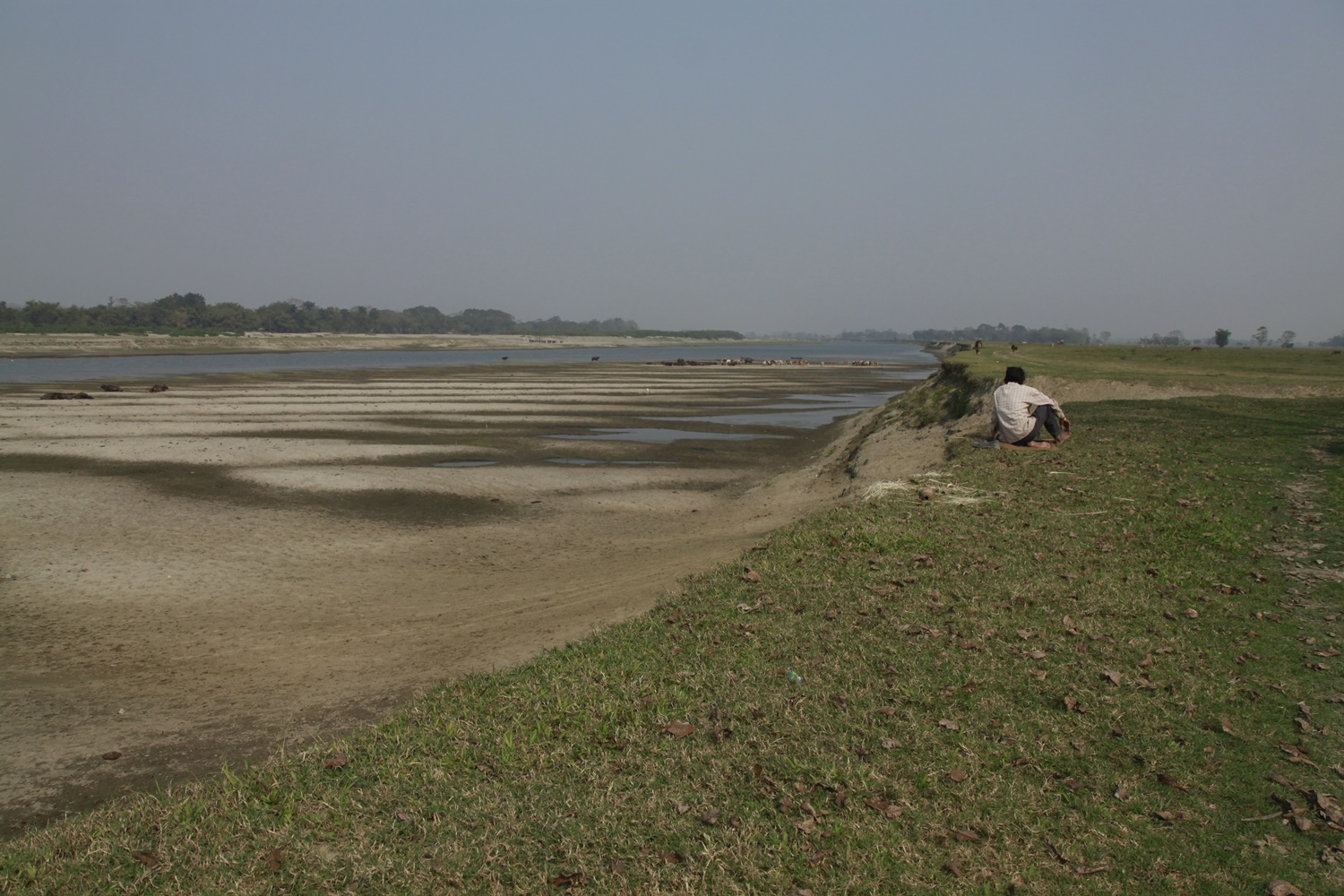 Losing fundamental rights in the name of protection

On the issue of fundamental rights, forest ranger Pranjal Gogoi said the place was not under eviction but “ejection”, meaning that as there is no clear demarcation of the borders of the sixth addition, cleaning up actions take place at regular intervals without any eviction notice. He said the same place has been ‘cleaned up’ twice in 2017.

“These lands have been used for grazing by our grandfathers, and we have been inhabiting these lands since then,” says Ali, showing us the grazing permits granted by the government before the proposal of Kaziranga’s extension. The grazer families, who are mostly Muslim, do not have other means of survival and many buffalos under their property are today trapped within Kaziranga, where access is denied to them, they say. “Many of us have sold our buffalos, as we do not have enough space for grazing, and nowadays we are struggling for our survival,”Ali says.

The violation perpetuated in the name of these additions, today considered under Kaziranga by the official documents, is questionable. First, its own notification, as observed above, has ignored the important judgment of 2002 and indiscriminately encroached upon the revenue land of people. Second, after Kaziranga was declared a Tiger Reserve in 2007, the sixth addition was categorised under the buffer area, a land territory “which aims at promoting co-existence between wildlife and human activity with due recognition of the livelihood, developmental, social and cultural rights of the local people.” Moreover, according to the Forest Rights Act, 2006, land tenure and customary rights should be recognised to all the Scheduled tribes and forest dwellers traditionally inhabiting these lands.

Without taking into consideration any of these measures, the forest department and government continue to negate the revenue land documents in possession of most people, and the land tenure and customary rights, such as grazing and fishing, recognised by the FRA, 2006.

A failure to not recognise the symbiosis between the complex ecological topography of the forest with its inhabitants, and in not respecting and applying the inclusive model of conservation which have been recognised at the national and international level. 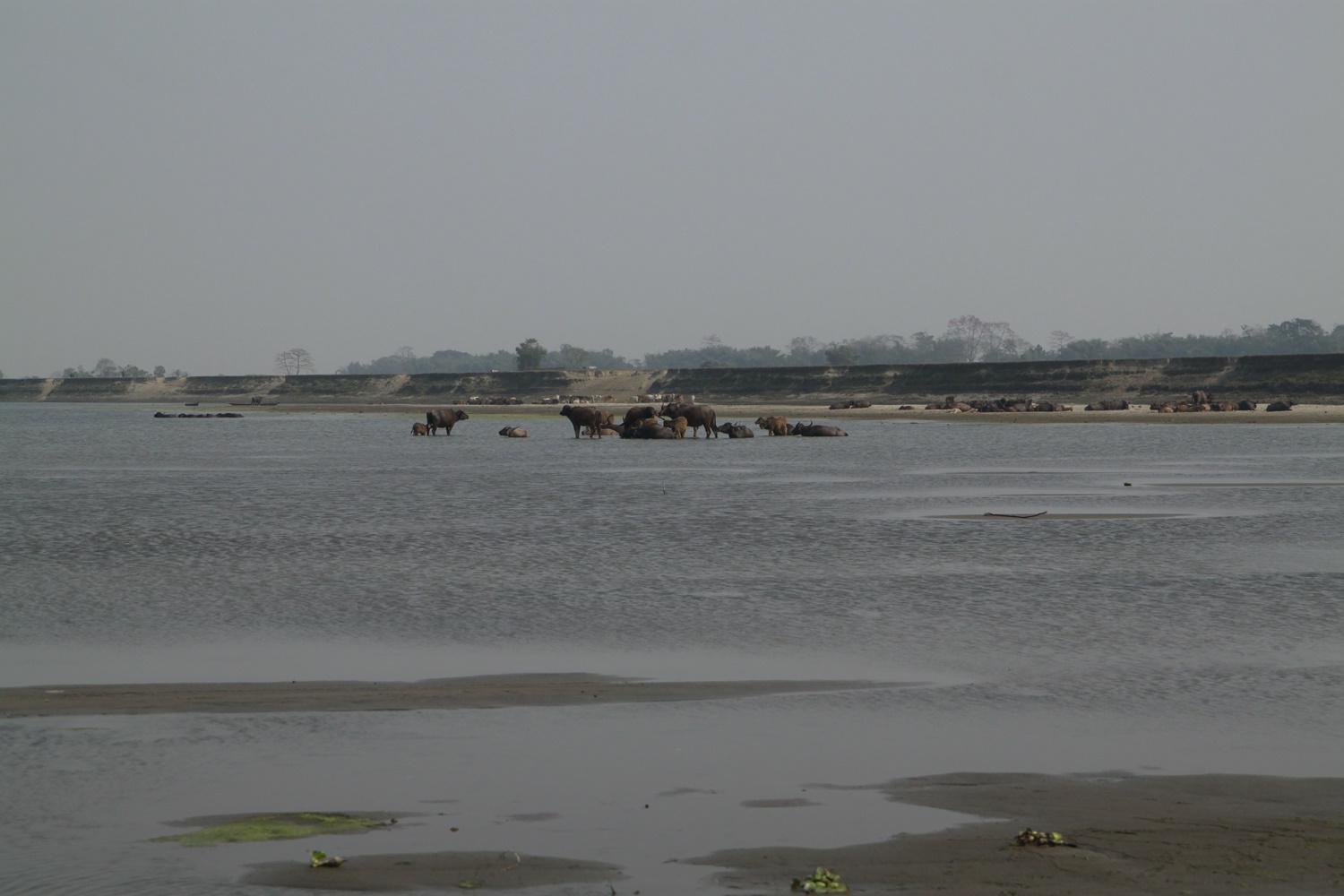 Buffalo herders on the tributaries of Brahmaputra, around the Kathonibari area. Credit: Eleonora Fanari and Pranab Doley

Is this one of India’s best examples of conservation models or a case of a violent ‘green grab’? The Kaziranga story of denial and repression will soon overshadow the symbiotic efforts of the communities that has helped in turning a few rhinos a century ago to more than 2,400 rhinos today.

The grazing forest land of Kaziranga could not have existed without its buffaloes, and the inhabitants of the areas are the only ones genuinely interested in taking care of the lands and ensuring that the environmental chain is kept alive, says a herder.

The question that arises is, whether the warped issue of eviction is actually linked to the danger of poaching, or is it related to an ever-expanding lexicon of neo-conservation policies that always find a reason to dispossess the most marginalised? The policies of Kaziranga National Park, that plans to double its own territory in the name of additions and corridors, continuously feed the need of displacement, exacerbating into an environment of conflict.

The rhino, a prehistoric inhabitant of this area, has become the central character in this theatre. The claims and counter-claims continue unabated in an atmosphere of confusion and distress, as the fate of Kaziranga and its people remains uncertain.

Eleonora Fanari is an independent researcher focusing on community land rights in Asia. She has been working on issues related to social exclusion, minorities, customary land rights and environmental justice. Pranab Doley is an indigenous activist working on labour and peasant issues.