Record-breaking heatwaves are set to get more common, and more intense, due to climate change. 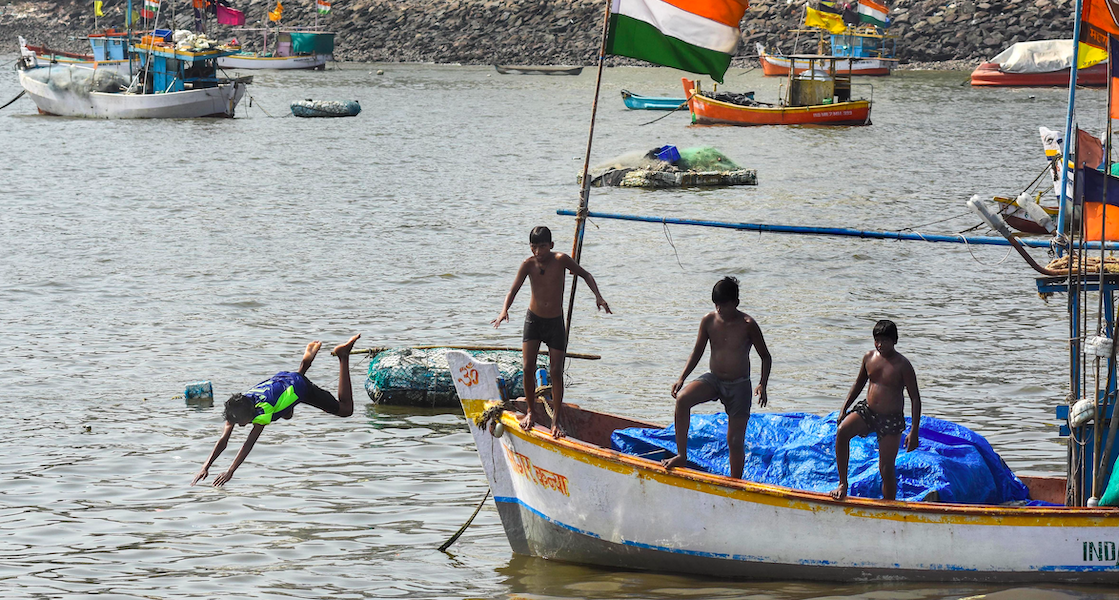 Boys jump into the Arabian Sea to beat the heat on a hot summer day, at Badhwar Park in Mumbai, Thursday, April 28, 2022. Photo: PTI

Climate change has potentially made these record-breaking heatwaves more probable, found two independent analyses. Climate change made the current heatwave a whopping 100 times more likely in India and Pakistan, according to an analysis by the United Kingdom’s national meteorological service, the Met Office.

Scientists with the World Weather Attribution (who used a different methodology in their analysis) gave a more conservative estimate: that climate change made this heatwave 30 times more likely.

While arriving at a precise estimate is difficult in climate modelling studies, climate change will surely increase the number and intensity of heatwaves, said climate scientists. In such a situation, the focus has to be on adaptation measures because these are immediate actions that governments can take to deal with the impacts of frequent heatwaves across the country.

Climate change – the warming of the globe due to human activities, such as the use of fossil fuels that increases levels of greenhouse gases – and extreme weather events are closely linked. Scientists have attributed many extreme weather events to climate change (such as the extreme heat in North America in June 2021). Modelling studies such as this one have predicted that warming caused by human activities can significantly influence the frequency of extreme rainfall events over India.

Scientist Nikolaos Christidis of the UK’s Met Office conducted a study on the recent heatwave in the northern regions of the Indian subcontinent. Regions including Pakistan and north India witnessed extremely high temperatures in April-May this year.

For his analysis, Christidis defined extreme heat events as the times that temperatures exceeded the heatwave of 2010 (when temperatures crossed 48° Celsius, and caused the death of more than 100 people in the state of Gujarat alone. His modelling study quantified probabilities of such extreme heat events recurring both in the presence and absence of human-induced climate change.

It found an increase in temperature in India and Pakistan since the late 20th century which continues throughout the 21st century: a warming that can only be attributed to the impacts of human-induced climate change.

The study found that if there was no climate change, a heatwave like the one in 2010 would be expected only every 300 years. However, thanks to climate change, it’s now “common” to find such record-breaking heatwaves: we see them once every three years.

“Spells of heat have always been a feature of the region’s pre-monsoon climate during April and May,” Christidis said in a press release. “However, our study shows that climate change is driving the heat intensity of these spells making record-breaking temperatures 100 times more likely.” 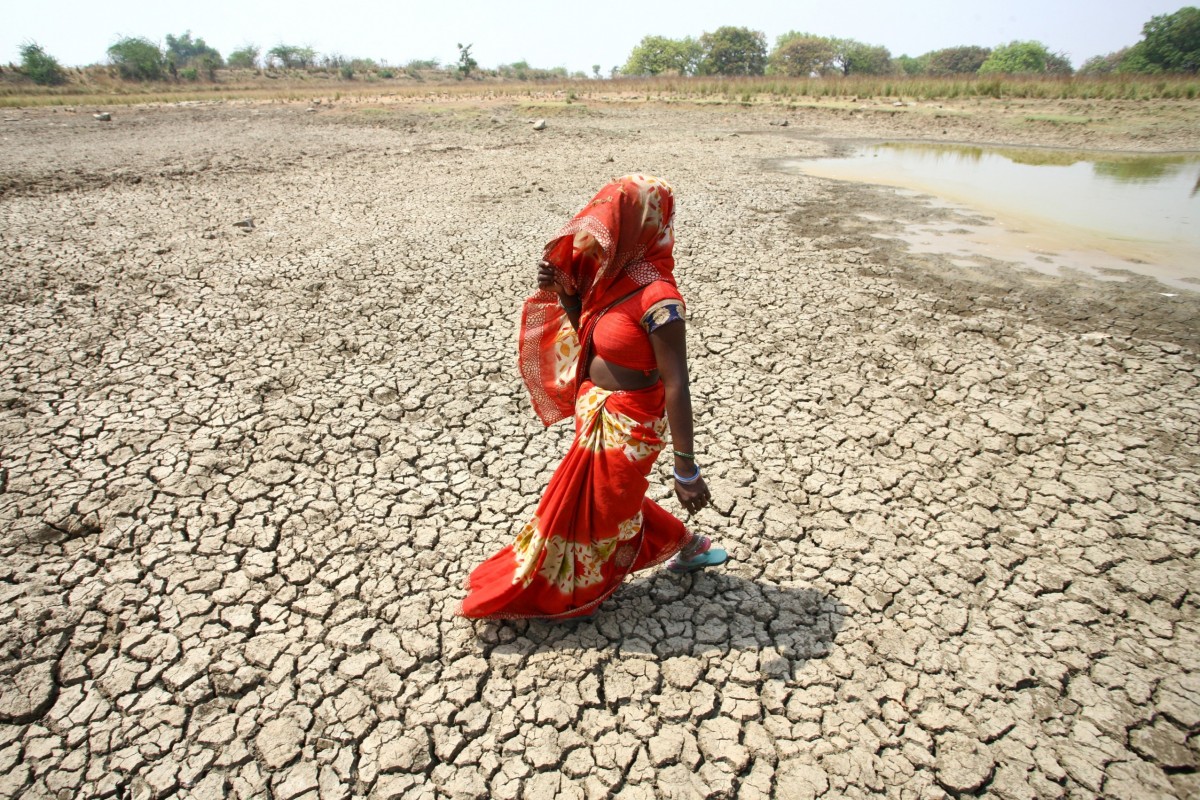 A woman walks on the bottom of a dried pond on a hot day in Mauharia village in the northern state of Uttar Pradesh, India, May 4, 2022. Photo: Reuters/File

But according to another estimate published on May 23, climate change made this heatwave 30 times more likely. Scientists with the World Weather Attribution (WWA), an international collective that analyses and communicates the possible influence of climate change on extreme weather events, also turned to climate models to study the probability of the occurrence of the heat wave in the presence and absence of climate change.

They used temperatures observed during this year’s heatwave in March-April to define what a heatwave event is (as opposed to the 2010 heatwave during May-June that the UK study used as a benchmark). Based on this, the team found that climate change had made such an extreme heat wave in northwest India and southeast Pakistan 30 times more probable.

However, this is a “conservative estimate”, said the authors in an online press conference on May 23. According to them, the disparity in the results of the two analyses is due to the different methodologies both analyses used.

“The real result is probably somewhere between ours and the UK Met Office results,” said co-author Friederike Otto, a scientist at Imperial College London, UK.

The future could hold more, and possibly more intense, heatwaves in store.

Imagine a rather realistic scenario where the world continues its historical trends and temperatures rise by 2.7° Celsius by 2100, one in which we are not quick enough to adopt climate mitigation or adaptation measures.

In such a scenario, India might experience heatwaves that break previous records almost every year by the end of this century, according to the UK Met Office analysis.

In a 2° Celsius warmer world, the probability of such an intense heatwave as this year’s would increase by 2 to 20 times more, according to the WMA study. “In future global warming, heatwaves like these will become more common and hotter,” said Krishna AchutaRao, scientist at the Indian Institute of Technology Delhi, who is also a co-author on the WWA study.

While putting a precise number on it might not be ideal, it is definitely true that such heatwave events in India could “increase manifold”, said climate scientist Vimal Mishra, Indian Institute of Technology Gandhinagar. There are studies that suggest that this is going to be more likely under a warming climate, he said.

To tackle this, we would need to both adapt and mitigate, said Mishra. Mitigating climate change is a long-term process, apart from being a collective responsibility and not just India’s problem alone. But adaptation measures – actions or policies that help people adapt to the higher temperatures – are more immediate ways to tackle this. This is something that the Indian government should do on a “massive scale”, according to Mishra. These include preparing our infrastructure (such as constructing buildings in a way that maintains cooler temperatures indoors), improving early warning systems, and stepping up to be able to meet spiking electricity demands during heatwaves – like we found occurring during the heatwave this time.

Similarly, with regard to the heatwaves, adaptation measures also include air conditioning and cooling systems, he added.

“Not everybody can afford this. So something needs to be done about that affordability as well.”

Indeed, there is growing cognisance of the right to air conditioning as a basic need (as opposed to a luxury, as it is usually portrayed) in these times of extreme heat.

India already has delineated heat action plans for 130 cities and towns. This needs to be scaled up urgently, said Aditi Kapoor, scientist at the Red Cross Red Crescent Climate Centre, The Hague, Netherlands who is also a co-author on the WWA study. More cities, towns and even villages will need action plans, and this would also call for more interdepartmental coordination within municipalities, she said.

Note: This article was updated on May 24 to incorporate the results of an analysis of the 2022 March-April heatwave that was published on May 23.