Why Do Blue-Tongued Skinks Have Blue Tongues?

Unlike our frivolous emoticon (:-P), sticking one's tongue out is serious business in blue-tongued skink lexicon.

A blue-tongued skink issues an open-mouthed warning to a predator. Credit: Shane Black

Tongues are meant to be pink. Lungs starved of oxygen turn our tongues blue. But seven species of blue-tongued skinks of Australia, Papua New Guinea and eastern Indonesia go through life with these remarkably coloured organs of taste with no signs of ill-health.

Like many other small creatures, these lizards blend in with their surroundings and become virtually invisible. The body colour of blue-tongued skinks doesn’t attract attention. Their drab colours are relieved by darker bands. But should anything irritate or scare them, they hiss and puff themselves up to look bigger. If they are pushed to the limit, they open their mouths wide and stick their tongues out. Unlike our frivolous emoticon (:-P), sticking one’s tongue out is serious business in blue-tongued skink lexicon.

Unpleasant tasting creatures like poison arrow frogs come in flashy colours like red or yellow to warn predators that eating them would mean trouble. But unlike red, blue is not a particularly startling colour. Nor do blue-tongued skinks wear the blue on their body; instead they conceal it in their mouths. Why would the skinks’ strangely coloured mouths cause harassers to abort their attacks? Researchers say there’s more than meets the eye.

Many species of lizards have ultraviolet vision. Often, creatures that have blue markings have UV-vision. Could the blue tongue be an ultraviolet tongue?

A team of researchers from Macquarie University, Australia, measured the UV-reflectivity of the big, fleshy, leaf-shaped tongue of 13 Northern blue-tongued skinks (Tiliqua scincoides intermedia). The back of the tongue reflected twice as much light and more UV than the midsection while the tip was the dullest. Like snakes and many lizards, these skinks pick up odour molecules with their tongues. When they are on a scent trail, they flick the front end of their tongues to smell. If the tips reflect UV, they might attract the attention of UV-seeing predators.

The researchers from Martin Whiting’s Lab at the university manipulated models of predators – a snake, monitor lizard, kookaburra and fox – with metal prongs to see what would push the skinks to show their tongues. At one and a half metres away, the skinks stuck out the tips of their tongues. They didn’t respond much to a non-threatening piece of wood used for comparison.

When the models were 50 cm away or when the researchers swung the models towards the skinks to simulate an intense attack, the frightened lizards reacted much more dramatically. They opened their mouths wide, revealing the back of their tongues that reflects UV light. They also hissed, turned sideways, and inflated their bodies.

However, the inferences by the authors of an earlier study seem to contradict this recent one.

The sudden flashing of a UV-reflecting tongue may take a predator with UV-vision aback, stopping the attack. It’s for good reason that the skinks don’t show their entire tongues when the threat isn’t imminent. Frequent use of this defence would take away the element of surprise besides attracting unwanted attention. So the lizards save their full-on display when they need it the most. If the attacker didn’t heed this warning, some of the skinks would bite as a final act of desperation.

Such last-minute displays are not unusual. The horned lizards of North America, for instance, are camouflaged. If a predator sees through this bluff, they puff up to look larger than they really are. If even this doesn’t deter the attacker, some species of horned lizards have a defence of last resort – they squirt a jet of blood from their eyes, startling the hunter to give up the chase.

The blue-tongued skinks reacted differently to the various models. They opened their mouths and displayed the full length of their tongues many more times to the stuffed kookaburra and fox than the reptilian predators. Are birds and mammals more fearsome predators than reptiles? Or do they see the UV-reflection and therefore the skinks target their performance to them? Many birds are known to have UV-vision but foxes don’t. But they may be UV-sensitive. Since the researchers didn’t study the visual systems of these animals, we don’t know the answer. But they hypothesise that the defensive display may be particularly effective against birds because once the skinks interrupt the aerial dive, the predators’ attack loses momentum. 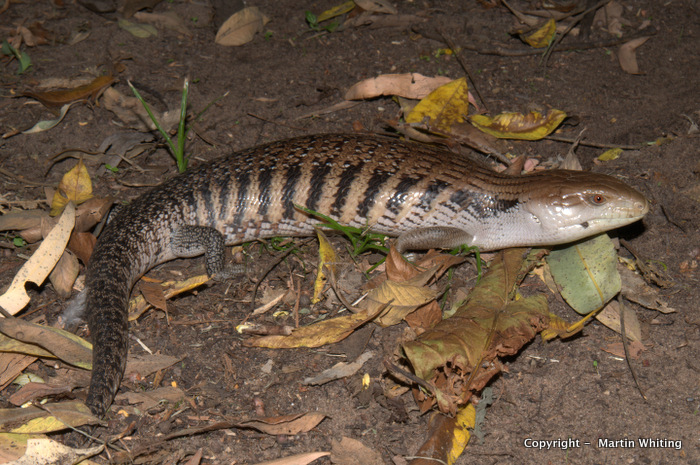 A blue-tongued skink blends with its surroundings. Credit: Martin Whiting

However, the results of an earlier study seem to contradict this recent one. A 2015 project compared another species of blue-tongued skink with the pink tongues of its close and distant relatives. It found blue tongues reflect UV better than pink ones and they stood out in high contrast against different backgrounds. Since blue-tongued skinks fight over territory, the Czech researchers suggest that the lizards open their mouths to display their pique at their rivals. Some studies show prey like voles and blue tits may use UV to communicate with others of their kind because raptors don’t pay attention to such cues, leading the scientists to infer that the skinks don’t use their tongues against their predators. If at all the skinks use it as a defence, they say it would be more effective against snakes and monitor lizards than birds. But the study didn’t test this hypothesis.

Since the tongues of both sexes reflect UV, Whiting says their role in posturing against each other may not be their primary role. But his team didn’t run experiments to examine this.

Despite the skinks setting great store in their blue tongues, Whiting and his team don’t think the appendages evolved to deflect predators. The wavelength of the reflection from their tongues is 320 nanometers, while the UV photoreceptors in the eyes of their predators – monitor lizards and birds – absorb wavelengths between 360 and 370 nanometers. This mismatch between the wavelength of reflection from the tongue and absorption by the photoreceptors indicates that the primary reason for the evolution of the blue tongue is something else. But it proved useful to intimidate attackers.

Whiting and his team are now testing the response of predators to the UV-reflecting tongues.

The study was published in the journal Behavioral Ecology and Sociobiology on June 7, 2018.