'I began composting my kitchen waste three years ago. Having experienced the process at such close quarters, I have learnt to live with the black soldier fly, and admire them.' 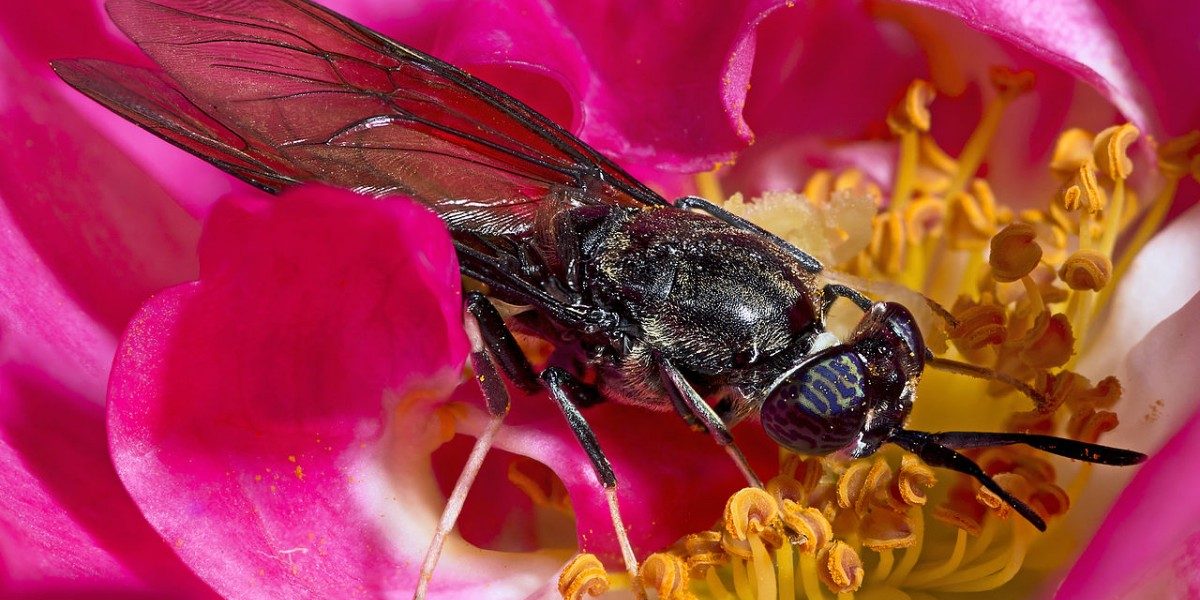 As home composting is becoming increasingly popular as a way to decentralise and resolve the growing problem of waste in cities, more and more of us are likely to come across the black soldier fly. We have long been educated to disapprove of flies due to their status as disease vectors, but the BSF is an exception to this rule.

In 2017, after resolving to reduce my waste footprint, I set up a pair of terracotta composters on my terrace plus all the tools I would need to manage them. It was rough at first. Within a week into the process of composting my kitchen waste, I opened the lid of the pot to see how things were going – and gagged in horror at the writhing nightmare inside: white larvae (also called maggots) covered the entire surface of the waste; on a quiet evening, I could hear the rustle of their movement and nearly sank to the floor in horror. No one had warned me about this.

Until this moment, I had been harbouring a sanitised idea of composting. In our house, we had pits dug in the ground to manage our leaf waste. The process here was simpler: we had to fill the pits and layer them with a sheet of soil. Then, once they were covered up, we ignored them for a couple weeks. By the time the pits were opened again, the leaves inside had turned into compost. Apart from the organic matter having been ‘out of sight, out of mind’, the fact that it was a leaf pit also made for less hassle because the dead leaves didn’t attract too many critters. But now, faced with the larvae, I wondered if composting my kitchen waste was such a good idea. Did I really want my terrace overrun by these creatures? Thankfully, my better sense prevailed quickly enough. After a few hours spent among books and articles, I was changed and, more importantly, humbled.

Flies are insects of the order Diptera (Latin for ‘two wings’) and include an estimated one million species, many of which humans haven’t studied in as great detail as the rest. In this order, the family of soldier flies alone contain over 2,700 species. The larvae in the composting pot were one kind of soldier fly: the black soldier fly, Hermetia illucens (BSF). It’s unfortunate that the relationship between humans and flies has for the most part been mediated by disease. The more I read about the BSF, the more reason I had to reconsider my view of this little creature. As it happens, BSFs could potentially redefine the future of many industries and, hopefully, our cities.

The many virtues of the black soldier fly 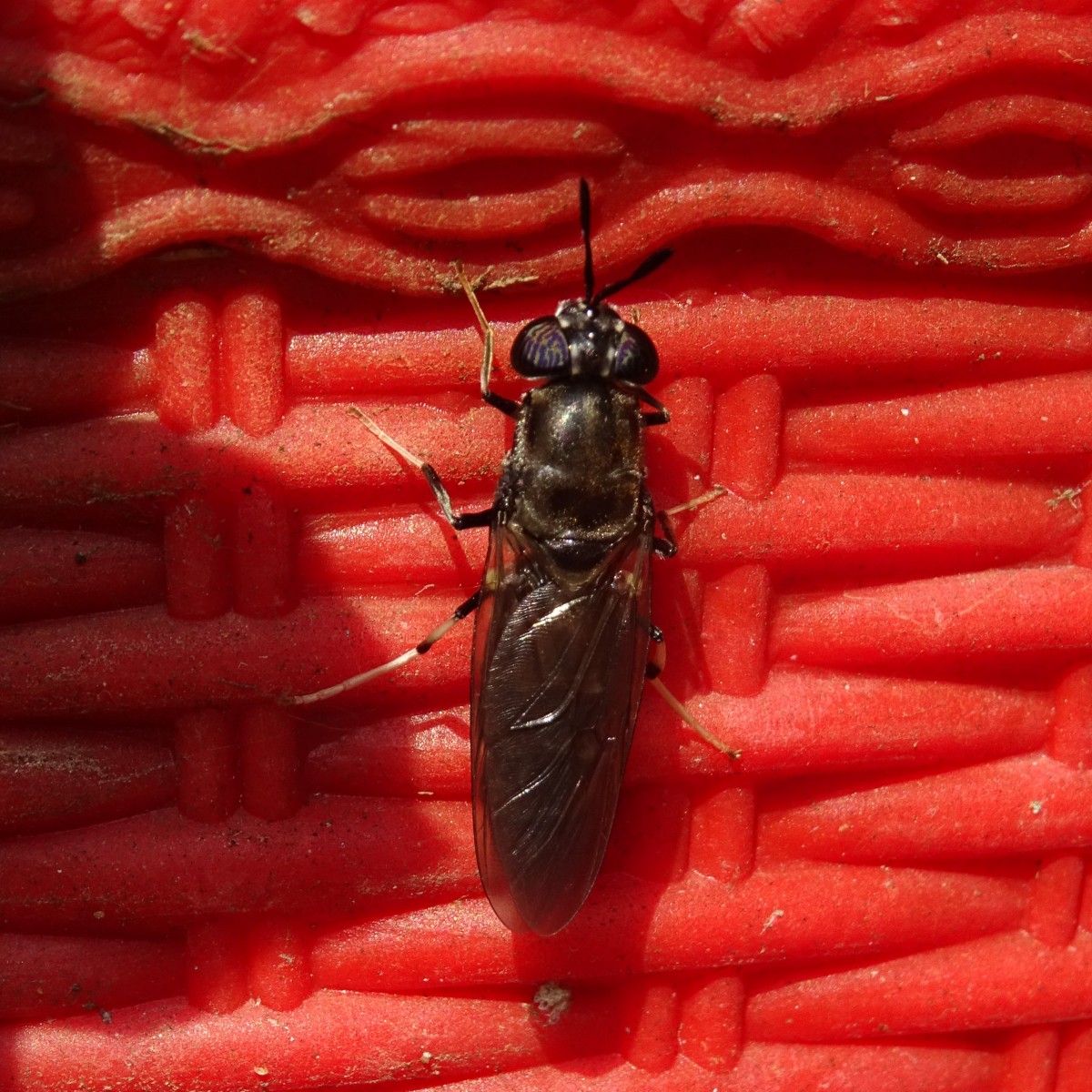 The life-cycle of a BSF is similar to that of a typical fly: it starts off as an egg, becomes a larva, then a pupa and finally emerges as an adult fly.

An adult female lays her eggs on the surface of or around decaying organic matter because BSFs are detritivores, or detritus feeders: they obtain their food by consuming decomposing plant and animal parts. Detritivores, which also includes earthworms, are valued for their ability to break down decaying or dead materials and thus help recycle nutrients. They are essential for Earth’s biogeochemical and energy flow cycles. The way bees find their way to flowers, the BSFs are specialised in finding their way to waste.

I hadn’t encountered a BSF before lifting the lid of the composter, but there they were the minute it was filled with kitchen waste. In a few days, the larvae would emerge from the eggs and feed on the waste. They have a voracious appetite and are omnivorous; rotting kitchen waste, coffee grounds, dairy waste, fish offal and manure are all equally edible. As they grow, each BSF larva can consume 25-500 mg of organic matter per day; as a result, they are able to swiftly reduce the amount of waste.

YouTubers have captured this feeding frenzy in many videos (here’s how 5,000 larvae consume two large rainbow trout in only 10 hours). The larvae are also quite hardy and versatile relative to the more sensitive earthworms and other insects, and can survive between 0º and 45º C and a variety of chemical conditions within the compost pile. In this time, the larvae also secrete a compound that repels other species of flies, thus keeping away potential insect pests and disease vectors and rendering the waste safer for humans.

(This said, it is always a good idea to handle organic waste during the composting phases with protection for your hands ensuring you have no open wounds.)

The larval phase lasts about 14 days. After this, the larvae transform into pupae: they stop eating and their bodies get rid of their digestive tracts. They also begin migrating away from their food source in search of a dry and protected place to pupate. It is these crawling mature brown-black pupae that often deter many people from composting at home: the assumption is that these dirty, dangerous disease-carrying insects must not be encouraged around the house. While this is true for the common flies, blow flies and their larvae, the BSF through all stages of its life-cycle, is harmless to humans.

An adult BSF that appears in the final stage of its life-cycle is about 15-20 mm long and has a shiny black body with metallic green-blue membranous wings. Its lifespan is only a few days, in which time its principal goal is to reproduce. In this time, it survives on the fat deposits leftover from its larval phase and does not feed. As a result, the adult BSF is rarely found inside human homes. Timid and rather gentle, I sometimes find them in the garden resting on leaves or flowers through hot days. On the off chance you spot an adult BSF inside your house, please know that it doesn’t carry any diseases, can’t bite. You could softly scoop it up and release it in the garden.

The future of BSFs 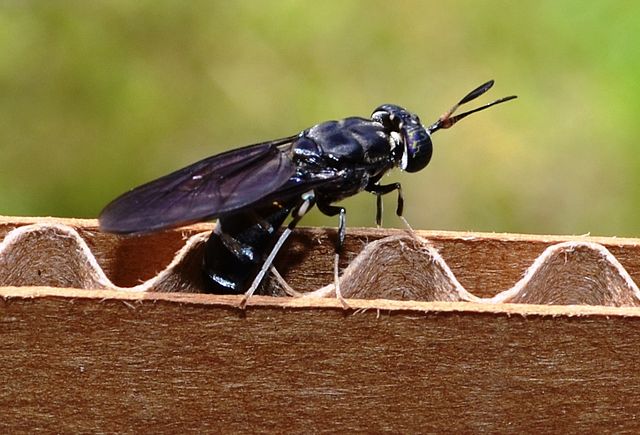 I began composting my kitchen waste three years ago. Having experienced the process at such close quarters, I have learnt to live with the BSF as well as have come to admire and respect them – and I’m not the only one.

BSFs are increasingly garnering international attention because they are the perfect candidates for large-scale ‘waste valourisation‘: the process by which organic and manure waste treated by BSFs is converted to something of greater value. They are financially viable, clean, efficient and fast; BSF larvae’s droppings, called frass, is a potential fertiliser thanks to its high nitrogen content. Finally, the nutritious larvae and pupae could make for protein feed for domesticated livestock.

Producing food rich in proteins for animal husbandry has traditionally had a big ecological footprint. For example, fish meal is harvested from the ocean or requires farmers to invest in water, energy and land in order to raise the fish. Insects like BSF on the other hand provide a less resource-intensive option. They’re also valuable to the farming sector because their offspring subsequently feed on the waste generated by these farms. People in the UK, France, China and the US have already established BSF farms for commercial, agricultural and research use.

BSF larvae and pupae are also rich in nutrients, proteins and fat, in addition to being safe for human consumption, and have caught the attention of scientists who support entomophagy – the consumption of insects by humans; there are even larvae recipes available online! Inventors have also been toying with bug farms, finding new ways to incorporate them in our daily lives.

In 1881, Charles Darwin published his last scientific book, with a name as long as its subject: The Formation of Vegetable Mould through the Action of Worms. It was a thesis Darwin had put together based on observations and experiments he had undertaken over four decades on the behaviour and ecology of earthworms. In his conclusion, he proclaimed, “It may be doubted whether there are many other animals which have played so important a part in the history of the world as have these lowly organised creatures.” These words capture the great arc of Darwin’s journey through his years of study, beginning with ‘lowly creatures’ and culminating, through the rigours of research, with recognising their virtues.

Through the last decade, the BSF’s identity has undergone a similar transformation. It is increasingly becoming an important part of our solution to the mess we have created. As the climate crisis calls us to rethink and rebuild our relationship with the natural world, reacquainting ourselves with the little black soldier fly, and learning to live and work with it seems like a good first step.

Arpita Joshi is co-founder of The Curio-city Collective and co-host of their podcast on cities and well-being. Her interests lie in climate and intergenerational justice.