The Bandipur-Mudumalai-Wayanad forest fire was the result of a colonial hangover that saw forests only as a source of timber – and not as an ecosystem that needed the occasional clearing. 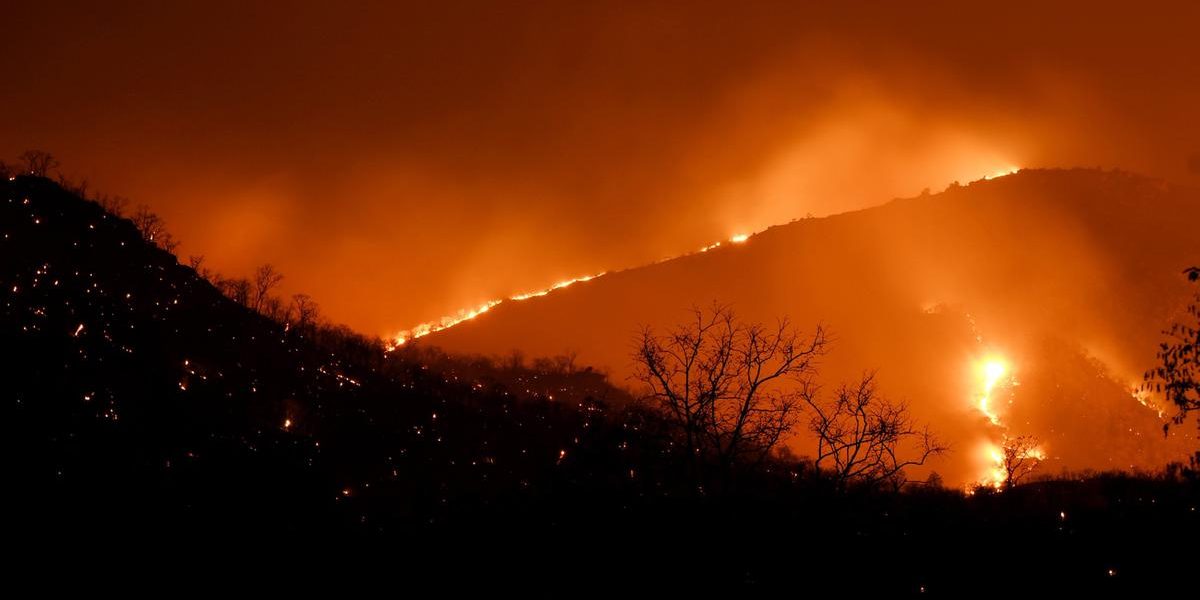 The Bandipur forest fire destroyed thousands of acres of forest in the last week of February 2019. Credit: PTI

The raging fires in the Bandipur-Mudumalai-Wayanad forest complex finally subsided after weeks, and the disaster is now being analysed from various angles. This tract of forests spread across the three states is home to one of the largest populations of both elephants and tigers in the country and also the world, and is understandably in the spotlight.

The initial thrust of the efforts had been to find the perpetrators responsible for lighting the fire and bring them to book, and it appears they have been apprehended. While forest departments’ actions to contain the fire are being examined, the Indian air force had also been roped in to help, so there was clearly little that the staff on ground could have done to stop the fire sooner.

But the question remains: what can we do to prevent such devastating fires in the future? Are arresting the two people responsible really going to stop future fires? Clearly not. The real solution appears to be almost paradoxical: looking back at history, traditional indigenous knowledge and the most up-to-date scientific information at hand, the only way to stop such devastating fires is to perhaps restart controlled burning across dry forests in India.

The question of “natural”

A majority of the publicity around the fire highlighted the fact that the fires were not “natural” but human-made. But the two are not mutually exclusive. Globally, scientific opinion is converging on the fact that humans have always been a part of nature, and their actions are also “natural”. In the Indian context, looking back at the history of forest fires, people have been burning forests periodically for over 50,000 years, and trees and plants have co-evolved with fire and are adapted to it. So it is true that fires have always been set by people – but this is also the “natural” baseline for forests in India.

Controlled fires have a positive impact, and they have shaped the forests that we now think of as natural. Fire suppression only started in colonial times, a period in which the administrators viewed the forests in terms of their timber value and not their overall biodiversity.

Also read: The Greed for Timber, and Climate Change, Have Made Himalayan Foothills a Tinderbox

Stephen Pyne, in a historical review of fire in India, notes that locals all viewed fire as an integral part of forest management. He noted in his 1995 book World Fire that it “converted organic residues into fertilizer, kept woodlands and prairies in grass, assisted hunting, cleansed soil of pathogens, and supported foraging for flowers, bees, tubers, and herbs”.

But the 1800s saw a range of “disbelieving Britons” disparage fires in India, where “every forest that would burn was burnt almost every year”, and “nearly the whole body of the population in the vicinity of forest tracts have, or imagine they have, a personal interest in the creation of forest fire”.

The question of penalising people who started fires also came up over a 100 years ago, but was found to be ineffective, where “exhortations and bribes with goats could not extinguish all the native firebrands” and “prosecutions for forest offences, meant as deterrents, only led to incendiarism, which was followed by more persecutions and the vicious circle was complete”. In summary, Indians have always been burning forests while colonial forest officers were against it and found it close to impossible to stop people from burning forests. Forest officers invariably turned a blind eye.

It is perhaps only in the last decade or so, with the rise of social media and the easy spread of information, that forest fires have been so widely discussed in the media.

Adivasi communities have been at the forefront of this historical burning, and have evolved intricate systems for doing this. For example, the Kattunayakans in Mudumalai have a saying: “If you do not burn it, it will burn”. They have intricate rules for when and how fires can be set, which include forewarning animals by banging a drum and walking around the forests.

The practices of the Soligas in the B.R. Hills of Karnataka are well documented, and their practices resonate closely with modern ecological research. Traditionally, they set fires early in February, associated with particular winds and rain. These are low-intensity fires, which they believe control invasive species such as the shrub Lantana camara, maintain plant diversity and provide fertiliser for a flush of grass in the summer after a light rain. The fire also facilitated the break down of seed dormancy, controlled pests and diseases, and rendered more fodder available for livestock and wildlife.

Like the Kattunayakans, they also have a fire related proverb: “Like a person needs a haircut, a forest needs a fire”. And almost all of these observations are now being corroborated by scientific studies.

In fact, these proverbs are particularly interesting. New research shows that high-intensity fires occur only when a particular set of things happen: high temperature, high wind speed, low humidity and large amount of flammable biomass. When all these boxes are checked, the source of ignition is almost irrelevant. Any small spark by the millions of people living around forests and the huge number of vehicles moving along nearby roads could trigger a large, high-intensity fire. This reinforces the adivasi proverbs and highlights the need to have controlled fires. Without it, dead biomass only accumulates further.

The impact of fire on trees and grasses

The impact of fires is linked to what we mean by the term ‘forest’. This in turn brings in an almost forgotten element of forests: the grasses. We are still stuck with a colonial bias towards trees where they are viewed as timber factories. More globally, according to the the UN Food and Agricultural Organisation, a forest could include an area covered up to 90% by grasses. Grasses are vital for herbivores, and are benefited greatly by fire.

Also read: The Panchayats Meant to Protect Uttarakhand’s Forests Are Under Threat

The type of grasses is relevant. C4 grasses grow quickly, dry quickly but also have deep root systems. Taken together, C4 forms a symbiotic link with fire. They provide flammable material for fires, and when the fires burn they help the grasses spread by suppressing other plants. The majority of grasses under tree canopies in India are C4 grasses, indicating that the entire system is well adapted to fire.

Trees in deciduous forests are known to grow very slowly. One of the major arguments against fires used to be that even ground fires seem to destroy 1-2-m tall saplings that take 10-15 years to grow. But new research shows that the root stock remains intact and the trees are able to bounce back within a year or two, and these trees have a much higher rate of survival. So the impact of ground fires on trees is very minimal.

The relatively new phenomenon of suppressing fire in India’s forests is essentially a colonial hangover that we have not yet rid ourselves of. There is an urgent need to restart controlled burning, which has been happening for 50,000 years across India.

However, with Lantana camara taking over many forests, indigenous communities losing access to forests and forgetting their nuanced and highly localised traditional practices around burning, this is no easy task. Restarting controlled burning will require careful experimental research and monitoring to see how these forests that have changed significantly over the last few decades can be taken back to their more healthy, regularly burned state.

Tarsh Thekaekara is a conservationist with the Shola Trust. The article also had inputs from Abi Vanak, Ankila Hiremath, Nitin Rai, Jayashree Ratnam and Raman Sukumar.