Battle swords have been drawn out between local grassroot activists and energy giant Oil India Limited. 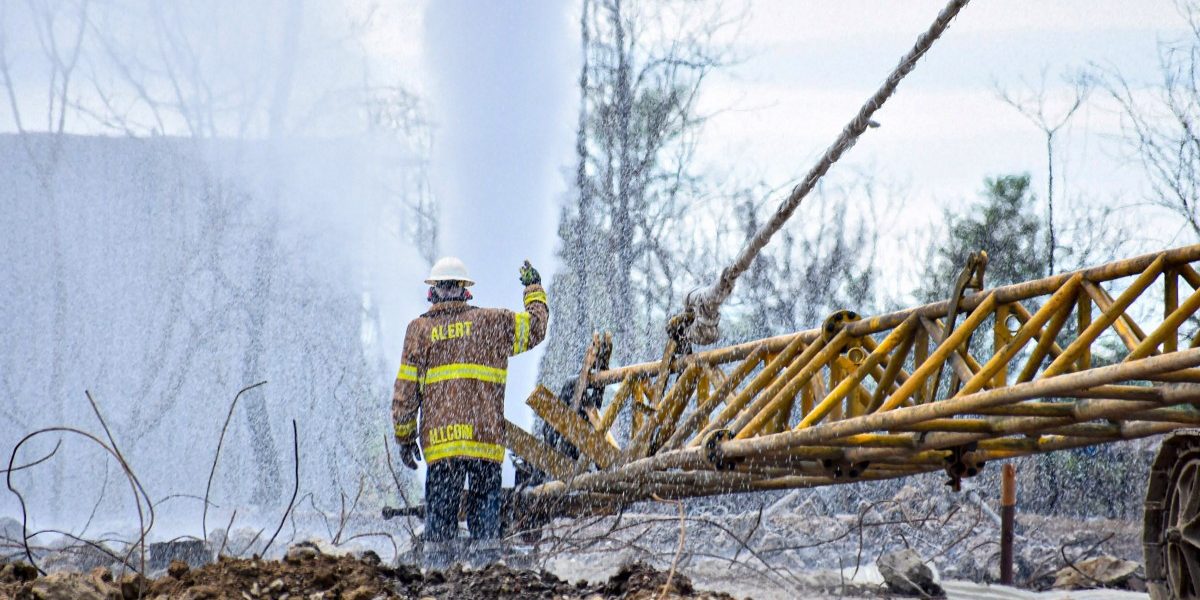 Water being sprayed at the Baghjan oil well site after three foreign experts were injured in an explosion, in Tinsukhia district, July 22, 2020. Photo: PTI

Guwahati: The National Green Tribunal (NGT) in an order dated August 6 has endorsed a slew of recommendations as put forward by an eight-member expert committee which it had constituted to look into the May 27 Baghjan blowout incident and the subsequent fire of June 9.

But even with the fire at Baghjan is yet to be doused, battle swords have already been drawn out between local grassroot activists and energy giant Oil India Limited (OIL).

The fossil fuel corporate, in a response to the interim report, called one Niranta Gohain, an activist from Baghjan, a ‘so-called environmentalist’. It also called Gohain’s statement in the interim report as not being ‘credible’.

OIL objected to the expert committee’s interim report: “The observations of the committee is based on a review of secondary data which needs to be further verified. No site visit was undertaken.”

It added Gohain’s name as a ‘so-called environmentalist’ and his statement being not ‘credible’ as part of its objections.

The NGT, in its order pertaining to the case filed by one Bonani Kakkar and others, which were filed in June against OIL, stated:

When The Wire reached out for a comment, OIL said it would wait and watch till the next scheduled hearing on November 3 when the final report by the expert committee will be submitted.

“When the interim report was submitted, OIL had sought time to respond. So, OIL did respond to the interim report in detail. We did not object to the compensation part. It is a ‘wait and watch’ till November 3. We should wait for the final report when it is submitted by November by the expert committee. There are other assessments being done by different bodies like TERI, IIT-G, ERM, CSIR-NEIST. So, let us wait till November,” said an OIL PR official.

Among the slew of findings as per the interim report another important point which was accepted by the NGT order of August 6 was the recommendations of compensation for the families impacted by the incident.

It highlighted a concluding point of the interim report which the expert committee had stated as, “Additionally, it has caused irreparable physical harm and damage to privately owned property of the survivors in the affected villages. The Committee therefore concludes the preliminary report with suggested interim measure including compensation for the affected families and individuals.”

Gohain, who is the proprietor of Wave Ecotourism (WE), his entrepreneurial tourism venture, and the general secretary of a local organisation called Bahankhyam Unnayan Shakti, has now floated BJN-5 Blowout Affected Forum, a public platform to address the issues impacted by the incident and also to counter OIL.

The forum besides addressing the cause of the affected people will also seek legal route in ‘highlighting OIL’s many irregularities’ to higher authorities.

Chapter two of the preliminary report by the expert committee states Gohain as “an environmentalist, entrepreneur and a resident of Dibru Saikhowa (a national park). In his representation dated 12.07.2020, Gohain mentioned that the concerned oil well has been established illegally without mandatory prior permissions which are needed such as Environmental Clearance, the Consent to Establish and Consent to Operate etc. No public hearings/consultations were held too.”

While speaking to The Wire, Gohain said the reply by OIL to the expert committee initial findings was a personal attack and a deliberate one as he and few other fellow environmentalists have been speaking out against OIL for its alleged lackadaisical attitude towards the eco-sensitive attribute of that particular region.

“The fact is the expert panel has mentioned me as an environmentalist in the preliminary report. This is a personal attack on me and is an attempt to dent my reputation. OIL is failing in its responsibility and as a result, both nature and people are being affected in and around Baghjan. There is so much discrepancy going on along with corruption. On account of this, I along with 12 other people came forward to form the forum. We will seek a legal route to highlight the failings of OIL and we will submit it to higher authorities. We demand that OIL comes out with a list of participants at the relief camps,” said Gohain who is the spokesperson of the newly constituted forum.

Birendra Chutia another activist and the chief coordinator of BJN-5 Blowout Affected Forum said that some days ago there was some argument between protestors from Goriyating, a nearby village and some hired contractors.

“The protestors were told by the hired contractors to go back. It was also alleged that the protestors were threatened by them. We were then accused of inciting the protestors. Both Niranta and me clarified we had nothing to do. It is well known that OIL does not like him much. He has been a bone of contention for OIL as he has been raising his voice against OIL for all these years. What OIL said about as a ‘so-called environmentalist’ with ‘no credibility’ was a targeted motive,” said Chutia who runs Green Vision (NE), an NGO.

It is not just Gohain and Chutia who are at loggerheads with OIL. A trio of petitioners who had also filed a case against OIL over the Baghjan episode in July.

NGT accepted their petition against Oil India Limited (OIL) on July 7 on the grounds are that the wells contained gas-condensates and that OIL had not taken the requisite precautions – a point the petitioners have said previous cases against OIL don’t consider. Their petition was clubbed with the other petitions against OIL and scheduled for a November 3 hearing.

“On one hand, OIL is trying to mislead the people with their politics of sympathy by stating that they have made losses. On the other hand, OIL seems to be making all efforts to cover-up the violations committed in the Baghjan and spending crores of rupees on image-building and promotions for the company. OIL should desist from making a mockery of the people Baghjan and Assam. The people of Baghjan will not rest till they get justice and their resources are protected. The activists have demanded that both Assam State Government and OIL should provide clarification regarding these issues that have come to light,” the trio said.