Baghjan Oil Well Disaster: What Is a Blow Out and How Does it Occur?

If no action is taken to stop the influx of fluid once it begins, then all of the drilling mud will be pushed out of the borehole. 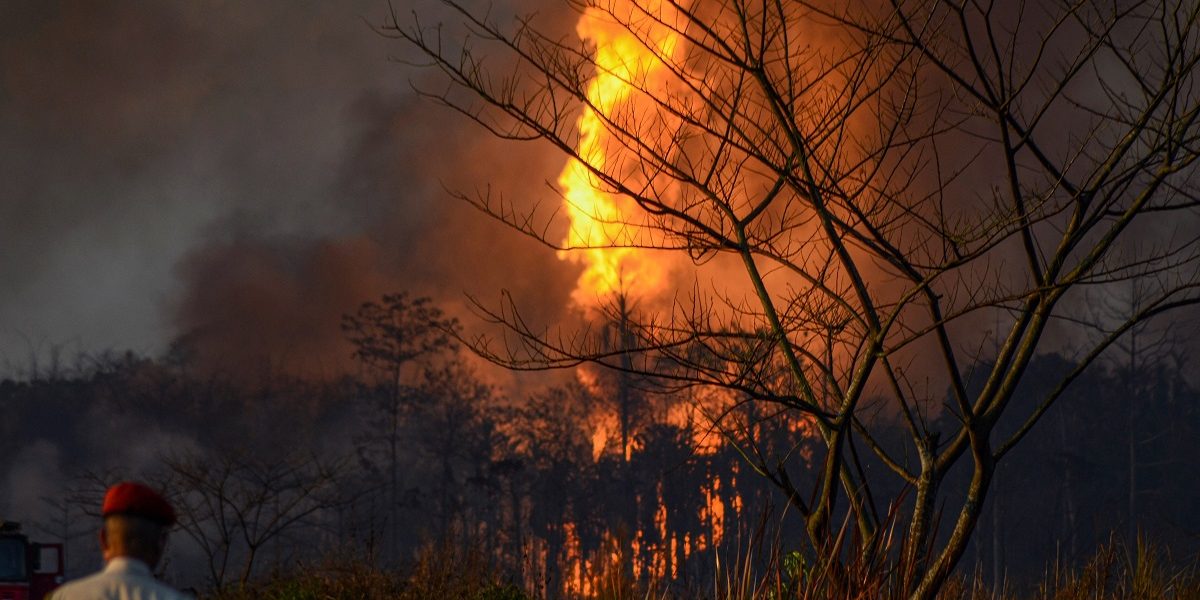 Smoke billows from a fire at Baghjan oil field, a week after a blowout, in Tinsukia district, June 9, 2020. Photo: PTI

The phenomenon of a blow out can be easily understood from the working of a pressure cooker in our kitchens. When the pressure regulator on the lid keeps working it releases the steam generated inside in a controlled way.

If for some reasons, the pressure regulator gets removed then steam will gush out of the cooker through the vent pipe in full pressure. Then it becomes difficult to the control the pressure. If a similar situation occurs in an oil/gas well then it is described as a blowout.

For crude oil and gas, a well is drilled like a conduit into the formations up to the depth where geological models and interpretations reveal the maximum possibility of hydrocarbons.

This zone is called the reservoir in terms of geology and drilling. Reservoir keeps the oil under pressure built up due to the depth from top of the soil. So, naturally any fluid under pressure will tend to come out with force whenever it gets a way out. Now, while drilling an oil or a gas well, to control this flow of oil and gas from the reservoir, a certain fluid of calculated specific gravity is pumped through the pipes. This fluid serves two purposes. One is to bring out the cuttings generated due to removal of soil to the surface and second is to maintain a hydrostatic pressure inside the conduit so that it balances the formation pressure. If no action is taken to stop the influx of fluid once it begins, then all of the drilling mud will be pushed out of the borehole and the formation fluids will be flowing in an uncontrolled manner at surface.

This would be known as a Blowout. Blowout can be internal as well. This flow of the formation fluid to surface is prevented by the secondary control system. Secondary control is achieved by closing off the well at surface with valves, known as Blowout Preventers – BOPs. When any indication of losing pressure control over the well, action must be taken at the earliest to avert the severe consequences of a blow-out. These consequences include:

Blowout can also occur while going for work over (repair operations in an existing producing well to enhance production) jobs. Statistically in 90% of the cases all over the world, human error has been responsible for the blowouts. Only in 10% cases, an equipment failure has been responsible for blow outs. In general, all operators are trained in well controlled operations. IWCF (International Well Control Forum) and IADC ( International Association of Drilling Contractors) well control schools are two very widely recognised institutes who train operators for well control operations. Every two years, all relevant persons need to undergo these training. It is important to note here that during production stage, this BOPs are removed, and X-Mass Tree installed. Hydrostatic pressure of the fluid inside the well is reduced to allow the crude oil or gas to come into the surface. During production period for various reasons, the formation pressure may deplete when it becomes necessary to go for repair jobs of the wells and thus work over operations are carried out. Every operating company will have a policy to deal with pressure control situations.

This policy will include training for rig crews, regular testing of BOP equipment, BOP test drills and standard procedures to deal with a kick and a blow-out. One of the most important things is to recognise when a kick has occurred. Prevention of Blowout depends on how early a kick is detected.

Since the kick occurs at the bottom of the borehole its occurrence can only be inferred from signs at the surface. The rig crew must be alert at all times to recognise the signs of a kick and take immediate action to bring the well back under control. The greater the difference in pressure (formation pressure to wellbore pressure) the easier it is for formation fluids to enter the wellbore, especially if this is coupled with high permeability and porosity. Gas will flow into the wellbore much faster than oil and water. Due to tremendous heat generated and also frictional heat, slightest of sparks turns this influx into a big bowl of fire.

This article first appeared on nezine.com. Read the original here.