The Baffling Breeding Habits of the Banded Stilts, Rain-Chasers of the Bird World

These wading birds flock in the shallow coastal wetlands of southern Australia and look for all the world like normal shorebirds – but their breeding biology is anything but normal. 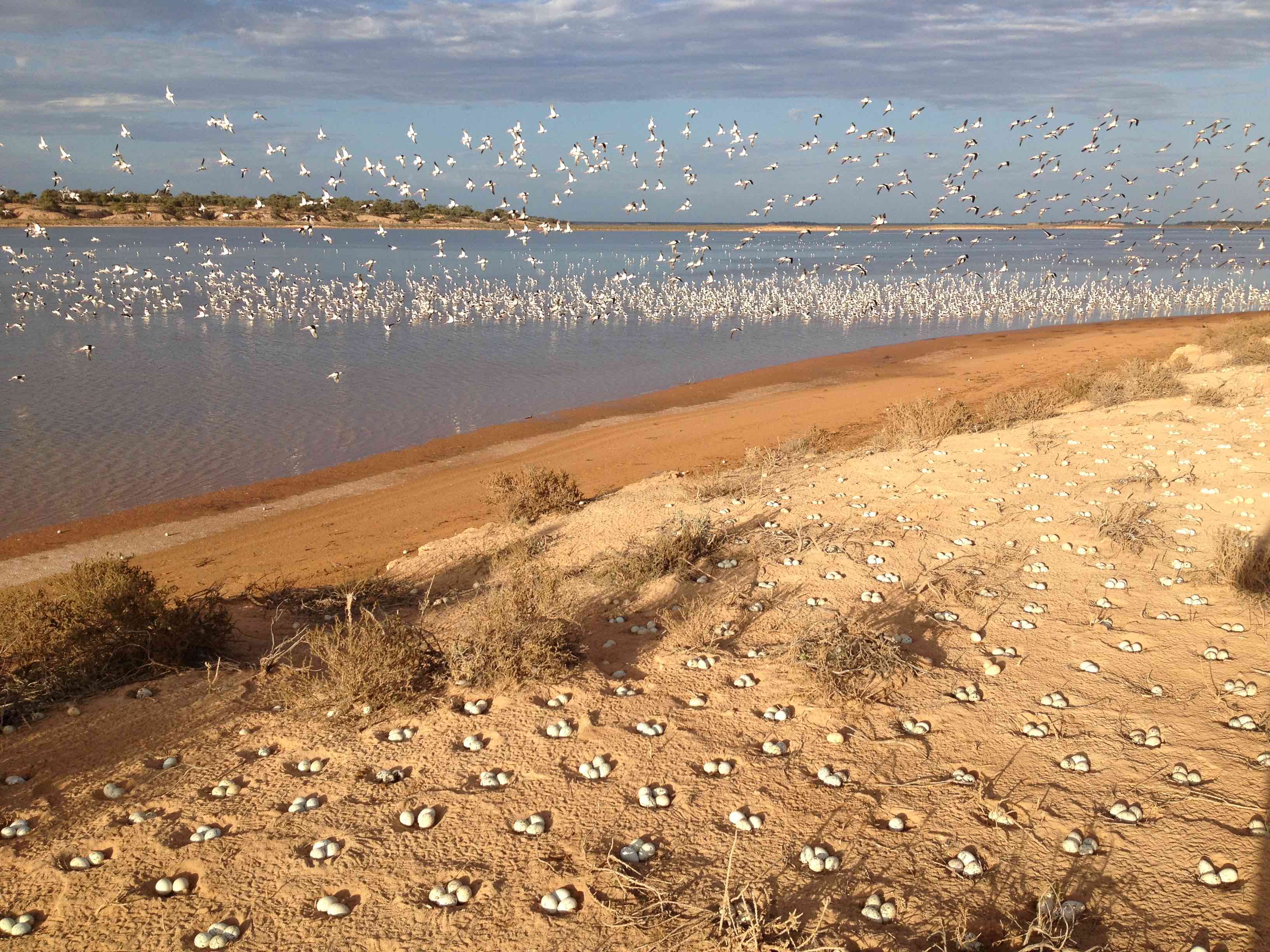 Banded stilts (Cladorhynchus leucocephalus), a wading bird, breed in such difficult conditions that it’s a miracle they haven’t gone extinct. They flock in large groups at their regular haunts, the shallow coastal wetlands of southern Australia, catching insects and probing the soft mud for tiny crustaceans and molluscs. These 20-inch-high stilts look for all the world like normal shorebirds – but their breeding biology is anything but normal.

Once in a while, as if on a secret command, the birds forsake the coast and take to the skies, flying hundreds to thousands of kilometres inland. Where they went to breed was a mystery that rankled ornithologists for at least a century. Although they had little evidence, they assumed the stilts, like many other birds, flew to Siberia. A letter written by a wheat farmer to a palaeontologist and curator at Western Australian Museum, Perth, radically changed that assumption in July 1930.

Mrs B.E. Cannon from Kukerin, Western Australia, said she’d seen a rookery, thousands of birds strong, on a sandspit in Lake Grace, about 250 kilometres southeast of the city. She sent a blown egg and photographs as evidence. This was the last place bird aficionados expected to find the birds. 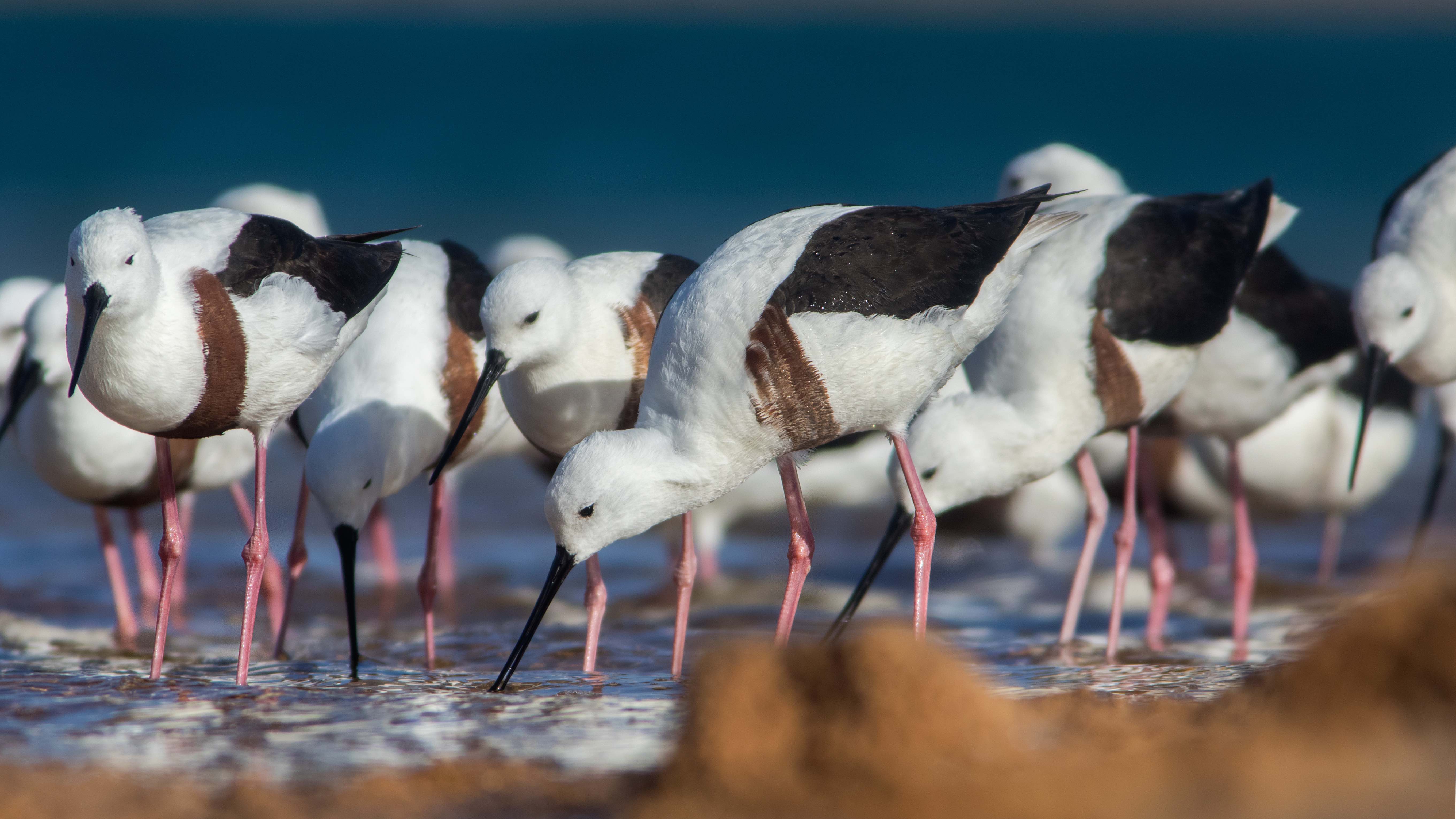 The following January, J. Neil McGilp and A.M. Morgan, two members of an ornithological association, saw a breeding colony of 54,000 on an island at Lake Callabonna, about 2,000 kilometres due east of Lake Grace. The nests, shallow scrapes in the ground, pockmarked the lakeshore with not even a bush to shade them from the harsh sun. These lakes are in the desert – one of the harshest places on the planet – and they aren’t perennial.

That secret command beckoning the birds from afar? Rains sweeping over the desert and filling gypsum-crusted lake beds. However, it doesn’t rain in the desert seasonally or even predictably. Often it fails entirely, causing droughts. But when it does rain, dormant eggs of the brine shrimp hatch, creating a smorgasbord in the midst of inhospitable terrain. The short period of plenty fuels banded stilts to nest en masse, the only waterbird to reproduce in the desert of Australia.

Since Cannon recorded the first breeding event, the birds seem to have raised young only 30 times in the following eight decades. Why do they rely on erratic, rare weather conditions to breed? What keeps the species going? 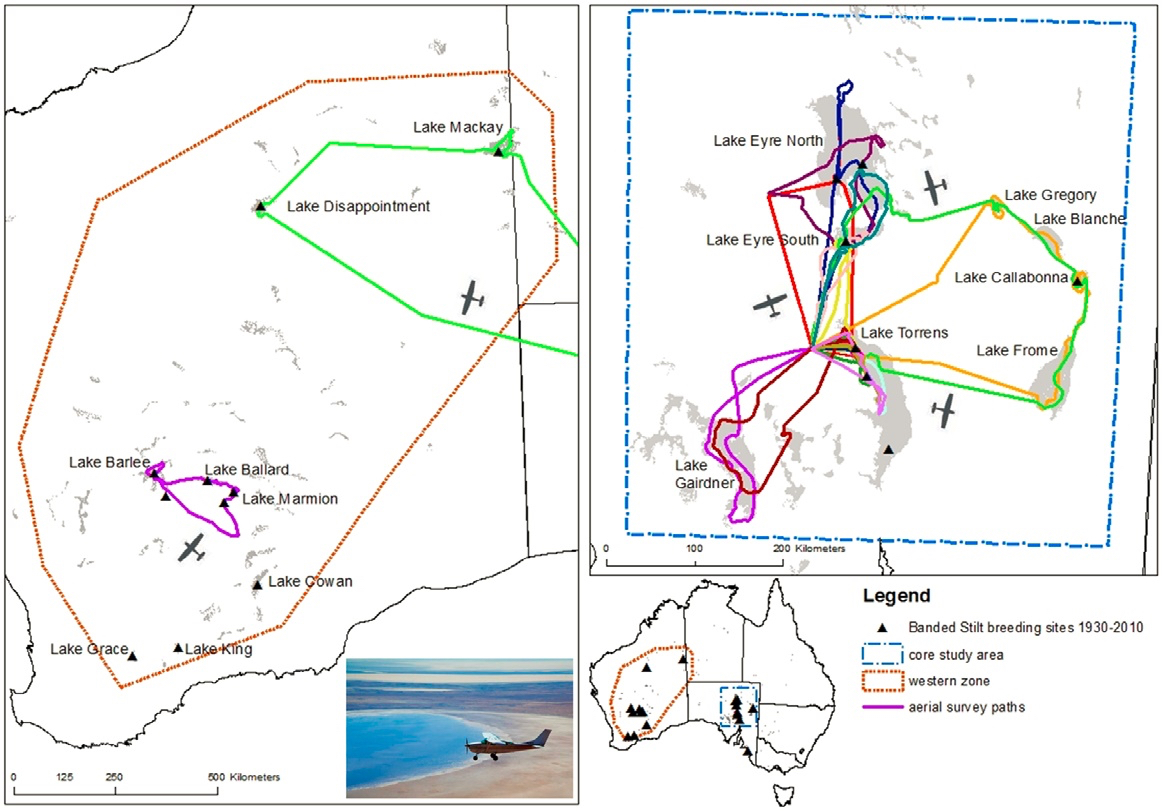 “Banded stilts have been a source of intrigue for decades in Australia,” Reece Pedler, doctoral student at Deakin University, Australia, told The Wire. He became fascinated by the birds’ behaviour when he lived “in a remote mining town in the Australian outback near some large salt lakes – sites where the banded stilts had bred previously. Like many other Australian desert animals, their amazing behaviour was such an intriguing mystery and one that seemed important for understanding their conservation needs.”

Pedler and his colleagues investigated the breeding biology of these birds by conducting aerial reconnaissance, checking the breeding colonies on foot, and by tracking them with satellite transmitters.

For six years, as soon as they heard of rains in the interior, they flew 21 sorties in a light plane over eight salt lakes in South Australia and over six in Western Australia. They found nine stilt breeding colonies and recorded 13 reproductive events. Using aerial photographs, they estimated between 200 to 40,000 nests at these sites. They approached seven colonies on foot to get data on nesting area size, density, number of eggs in a nest and the size and weight of eggs.

“The logistical challenges in reaching some of the nesting sites on remote salt lakes were extreme,” says Pedler. “After spotting breeding colonies on tiny islands in remote salt lakes, we needed to reach these on the ground. This usually involved many hours of travel in 4WD vehicles across rough tracks, then kilometres of walking across wet salty mud (sometimes ankle- or knee-deep) to reach the nest sites.”

Each 250-gram bird laid usually about three eggs – some laid as many as five – that were between 50 and 80% of her weight. In comparison, the eggs of a close relative, the black-winged stilt, range between 32% to 66% of the parents’ weight.

Using remote sensing data, the researchers built a 29-year record of lake inundation events and found the water bodies had high water on at least 50 occasions. Reports of stilt breeding behaviour at Lake Torrens, 400 kilometres due north of Adelaide, South Australia, suggested the birds nested only during major floods and ignored the minor ones. Even though the wading birds had the opportunity to breed on those 50 occasions, they apparently bred only on half those instances. If rains are so rare in the outback, why do banded stilts forgo these opportunities?

The researchers discovered it wasn’t enough for the lakes to fill up: they had to have enough water to last until the chicks fledged. For this reason, winter rains, even if minor, were more productive because the water lasted longer than heavy summer downpours. Indeed, in June 2013 (winter in the southern hemisphere), even though the spread of water at Lake Torrens was only 11%, 9,000 pairs of banded stilts had between 12,000 and 14,000 chicks. This meant the birds don’t rely on rare major floods that strike once or twice a decade, and they can breed frequently in partly flooded lakes.

“Both I and my colleagues were very surprised to find the banded stilts attempting to nest after some rainfall events which produced only minor flooding,” says Pedler. But judging if the lake’s waters would last until chicks fledged is tricky, and the birds frequently miscalculated and got caught by a fast receding coastline.

In July 2015, thousands of adults lay dead leaving an estimated 10,000 nests exposed along the shores of Lake Disappointment in the Great Sandy Desert of northern Western Australia. What caused this mass mortality is unknown.

How do banded stilts know when rains arrive hundreds of kilometres away? Studies suggest they may hear low-frequency sound of the rains, temperature and pressure changes caused by the weather, or even smell. It’s probably easier to sense large rainfall events, but it’s astonishing they know when short spells of rain arrive.

To track the birds’ movements, the researchers tagged 57 birds with solar-powered satellite transmitters.

“When logging in to the tracking website each day to download our tracking data, we were at times astounded by the long distance flights the birds had made overnight,” says Pedler. “Some of these flights, including banded stilts flying 1,000 kilometres in one night, were extremely surprising. The birds were moving much further and faster than we had expected.”

Within a week of rains hitting the distant salt lakes, 18 birds flew inland from the coast, undertaking journeys between 150 and 2,300 kilometres. In a paper from the same study published in 2014, the authors note one bird that flew 2,200 kilometres in little more than two days.

But many tagged birds didn’t respond to the call of procreation, refusing to take the cue from others in their flock. Why didn’t they? The researchers don’t answer. 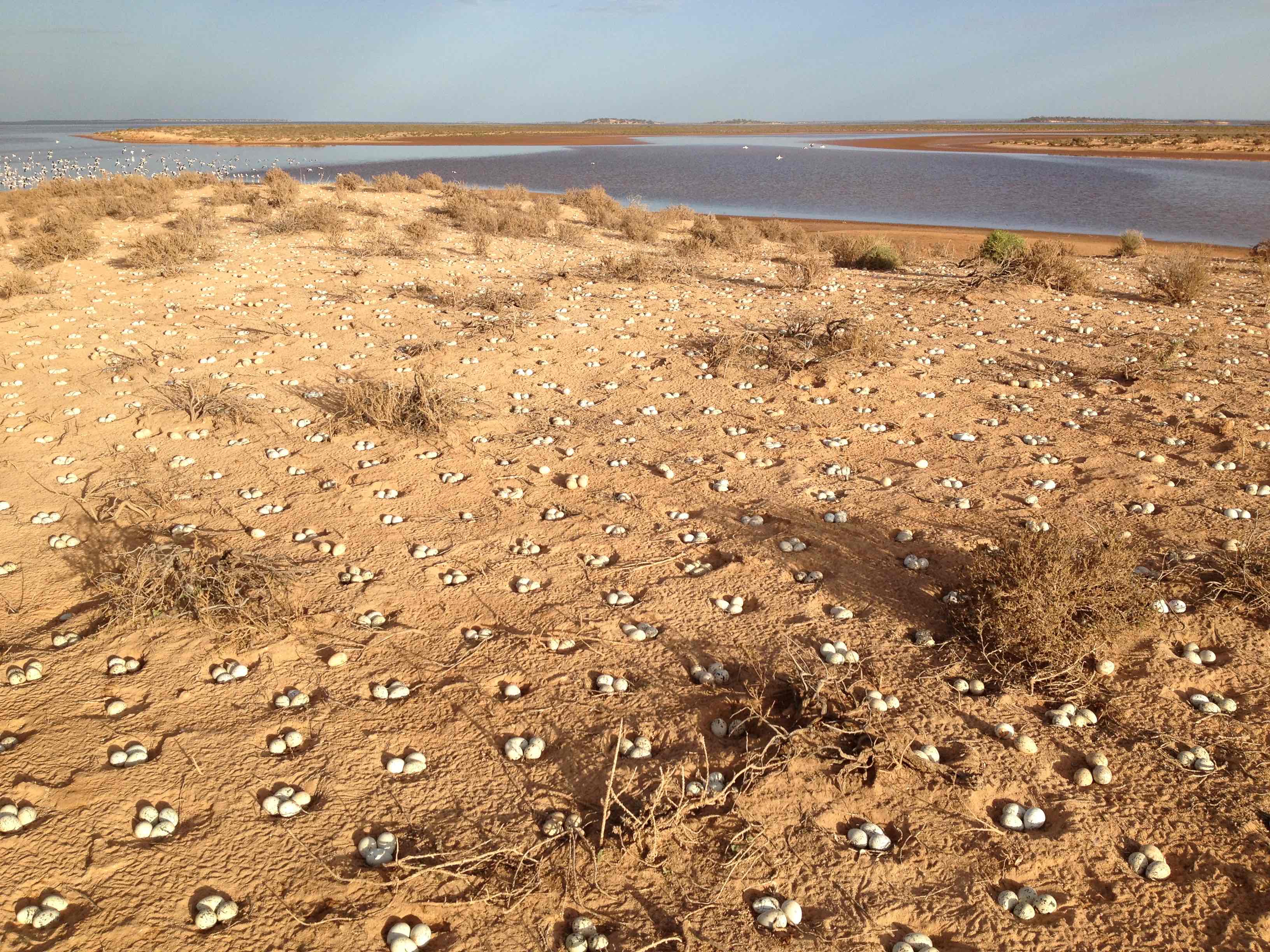 Nests on the bank of Lake Ballard. Credit: Reece Pedler

Despite the strenuous lengths the birds went to have chicks, they abandoned them before they hatched in seven of those breeding attempts. The researchers weren’t certain what caused the birds to flee, and speculate that silver gulls (Chroicocephalus novaehollandiae), predators of stilt eggs and chicks, might be to blame in most cases. Over the past 80 years, gull numbers increased at many salt lakes in Southern Australia, where the stilts are sitting ducks.

For instance, in 2012, gulls ate 29 eggs an hour at Lake Eyre South. When chicks hatched, they killed four every hour. Less than 5% of the 30,000 eggs survived. The gulls were such a problem at Lake Torrens that the state environment department culled them.

“We don’t yet fully understand why silver gulls have become a problem to the nesting banded stilts,” says Pedler. “However, it seems that these gulls, which are native, have increased in number due to human waste management practices.” 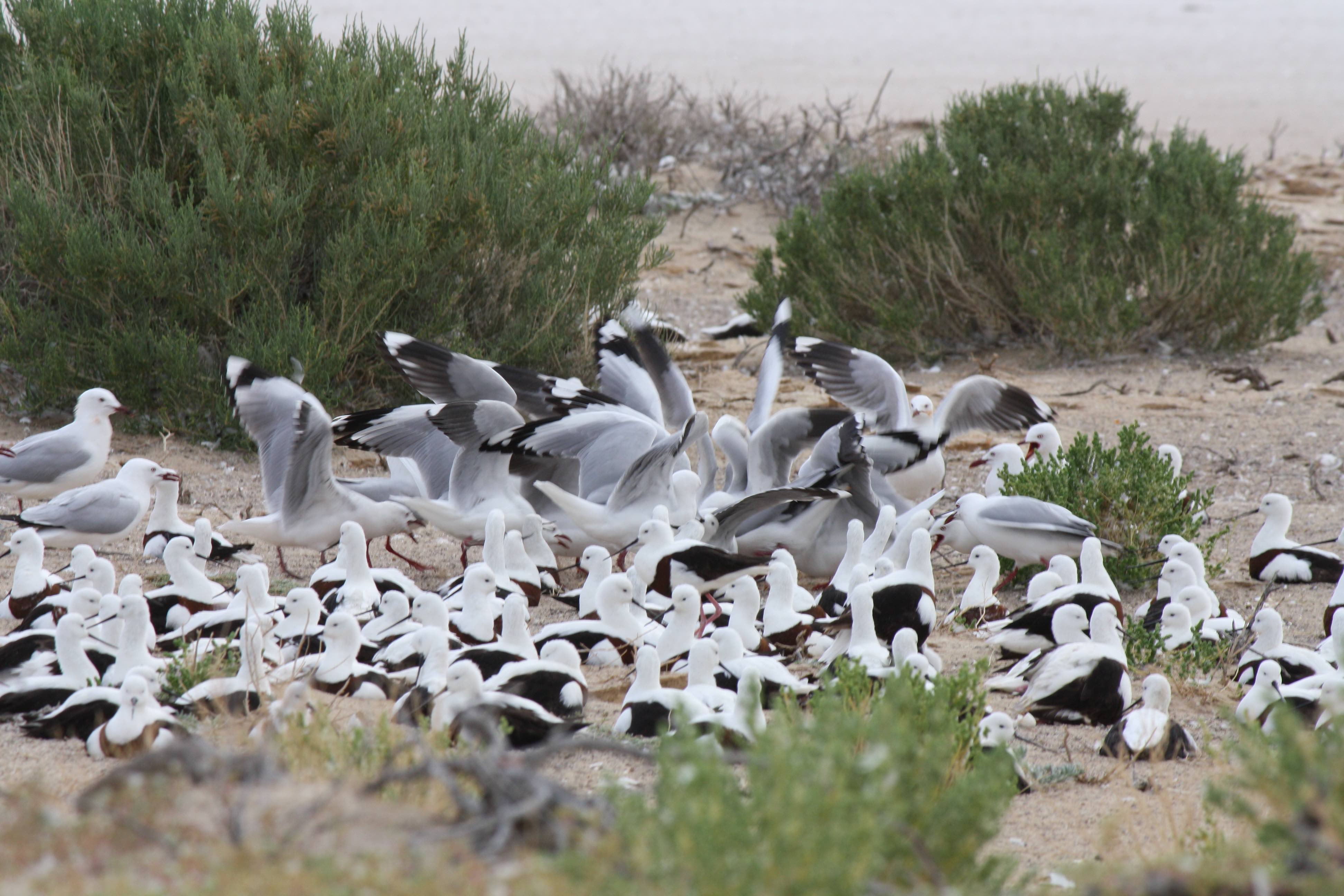 This is probably why these ground-nesting birds fly farther to gull-free lakes of northwestern Australia. But even these spots may not be safe for long. Fertiliser companies plan to mine these salt lakes for potash.

All these investigations – by air, on foot and satellite – revealed the birds bred seven times more often than recorded. The researchers say the above-average rainfall in the early part of the research period may have generated more nesting attempts, and their intensive aerial surveys detected more events than would have been possible otherwise.

However, that doesn’t mean the birds have it easy. They go to great lengths to have offspring – undertake strenuous journeys deep into the desert and invest in hefty eggs – but between the silver gulls and erratic weather conditions, those eggs have a measly 30% chance of hatching. The chances of those chicks fledging are worse. 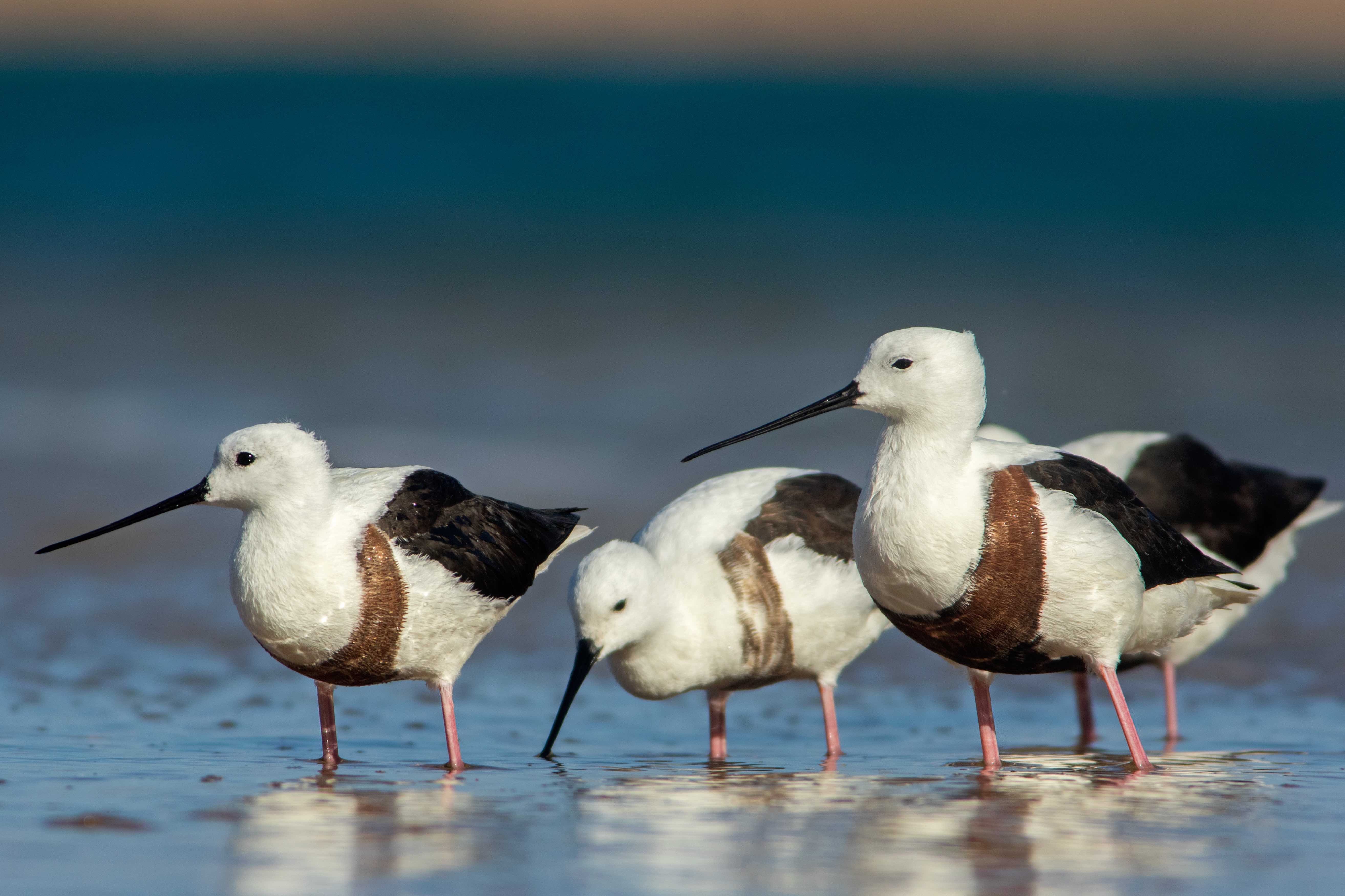 Biologists know a lot more about the species than they did a century ago. But still many fascinating questions remain unanswered. For instance, how do they sense rains?

The study was published in the journal Conservation Biology on October 5, 2017.