India's Textile City of Tiruppur is an Environmental Dark Spot

Residents and farmers have alleged that the dyeing and bleaching units in the city discharge dangerous chemical effluents directly into the river under cover of darkness or when it's raining. 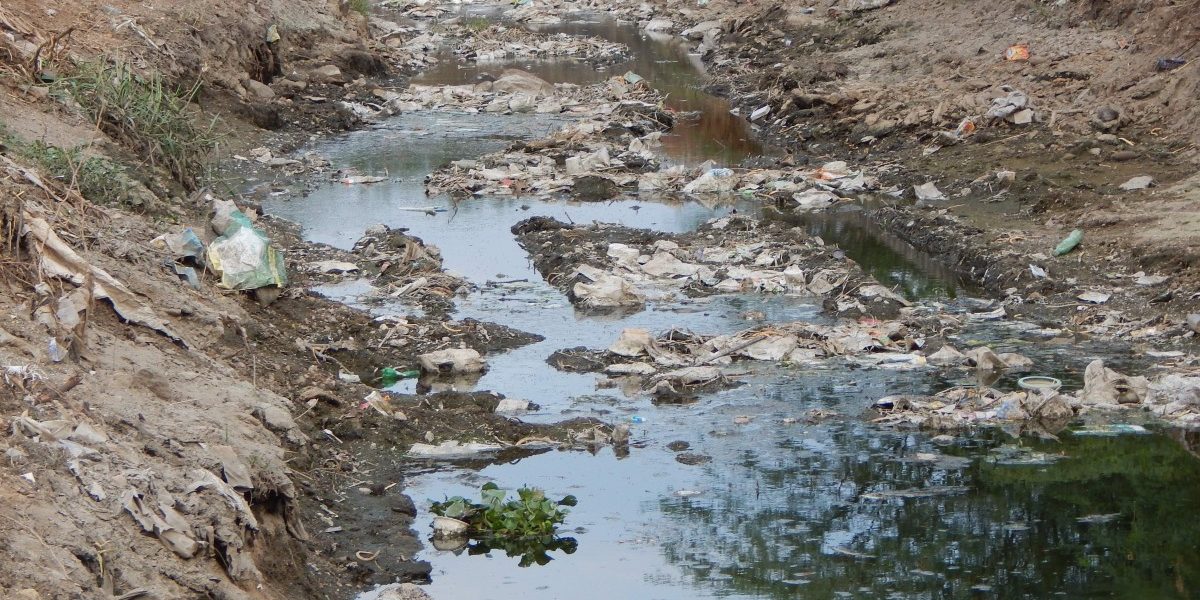 The ball boys and ball girls at the recently concluded Australian Open sported ‘sustainable’ clothes manufactured in the textile city of Tiruppur, in Tamil Nadu. According to news reports, the garments had been made using recycled PET bottles. While the story of an Indian hand in such an initiative could attract attention the city certainly deserves, the manufacturer’s claim to environmental sustainability is suspect.

For starters, the recycled yarn was imported from Taiwan, knitted and dyed in Surat and finally tailored in Tiruppur. Such a wide footprint across countries can hardly qualify as anything green; more importantly, the long-term environmental record of the city’s textile industry is a cause for even more concern.

Since experiencing explosive growth from the 1980s, Tiruppur has become a successful cotton knitwear export hub. The city’s hosiery industry counts global fashion retailers among its clients, contributes to the country’s export earnings and generates jobs. But its fortunes in a globalised era have always been accompanied by severe environmental degradation.

Though Tiruppur’s growth story has tapered off in recent years, the people living in and around the export hub continue to pay an enormous environmental price for its industry’s appetite for profit.

Specifically, the city’s dyeing and bleaching units that add colour and flair to its apparel have turned the once-beautiful Noyyal river into a toxic sewer, and destroyed vast areas of agricultural land the water body once sustained. 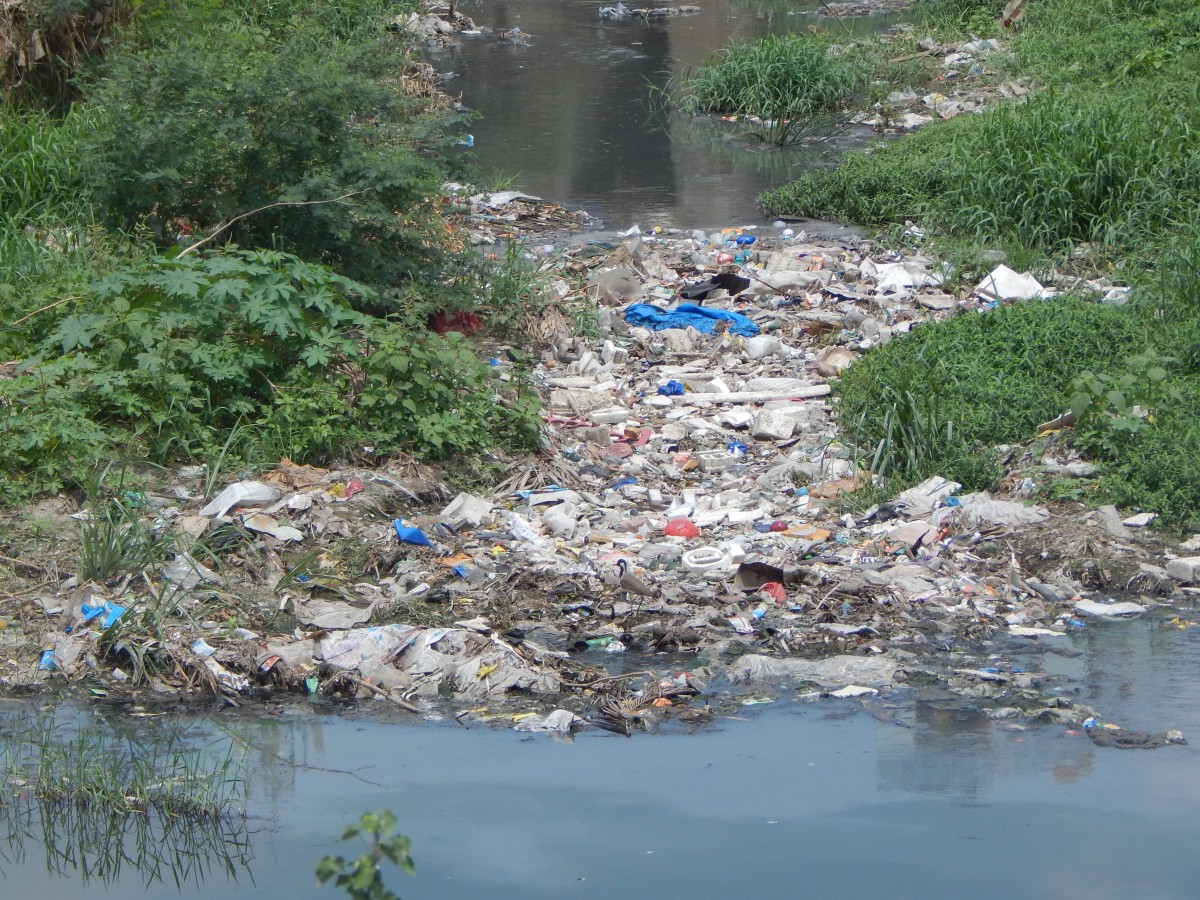 Residents and farmers have alleged that the dyeing and bleaching units in the city discharge dangerous chemical effluents directly into the river under cover of darkness or when it’s raining. Such actions would violate orders of the Madras high court, which require the factories to treat their wastewater and reuse it. The industry has set up effluent-treatment plants in Tiruppur but the problem of water pollution is far from solved.

White textiles may seem harmless for the lack of colour but are responsible for a significant amount of water pollution due to the impact of bleaching. Besides, all textiles dyed in any colour necessarily have to be bleached first, which adds to the toxic load of dyeing. In Tiruppur, effluents from the bleaching and dyeing processes let out into the river have seeped into the groundwater and riverside fields. Fertile agricultural land located within 2 km along either side of the Noyyal has thus been rendered unproductive, disrupting the livelihoods of thousands of farming households.

During a recent visit to Tiruppur and its adjoining districts, I spoke with farmers in the riparian villages of Anaipalayam, Vengalapalayam and Arugampalayam (Tiruppur district); Kodumanal (Erode district); and Athipalayam and Anjur (Karur district) – all located downstream of Tiruppur. By road, these villages are 17 to 80 km from Tiruppur, and their lands have been rendered similarly barren in spite of their distance from the city. All farmers blamed Tiruppur’s factories for destroying their livelihoods. They described a diverse basket of crops, including rice, sugarcane, groundnut, sesame, turmeric, beetroot, green chilli, tomato, cotton, tobacco and various vegetables, that they grew on their farms before the dyeing pollutants began to impact them in the mid-1990s. Now, the river can only support a few crops, mainly maize for dairy and livestock farming, and coconuts. The economic and concomitant ecological transformation of the area has left these once successful farmers with meagre incomes.

V.P. Muthusamy (65), who lives in Vengalapalayam village of Uthukuli taluk in Tiruppur district is the president of the Primary Agricultural Cooperative Society at Uthukuli. He owns a 10-acre farm right on the riverbank, where he used to grow sugarcane, paddy, banana and turmeric until the early 1990s. Now he can only grow coconut trees.

“My children don’t even know what sugarcane and paddy look like,” he said. “Though the river skirts my farm, the pollutants discharged by the textile factories have contaminated its waters and subsequently [the water] in irrigation ponds and wells.”

Even the coconut yield has plummeted: he had 600 coconut trees eight years ago but has only 250-300 left. Many of their coconuts are also smaller than healthy coconuts should be and so sell for less. 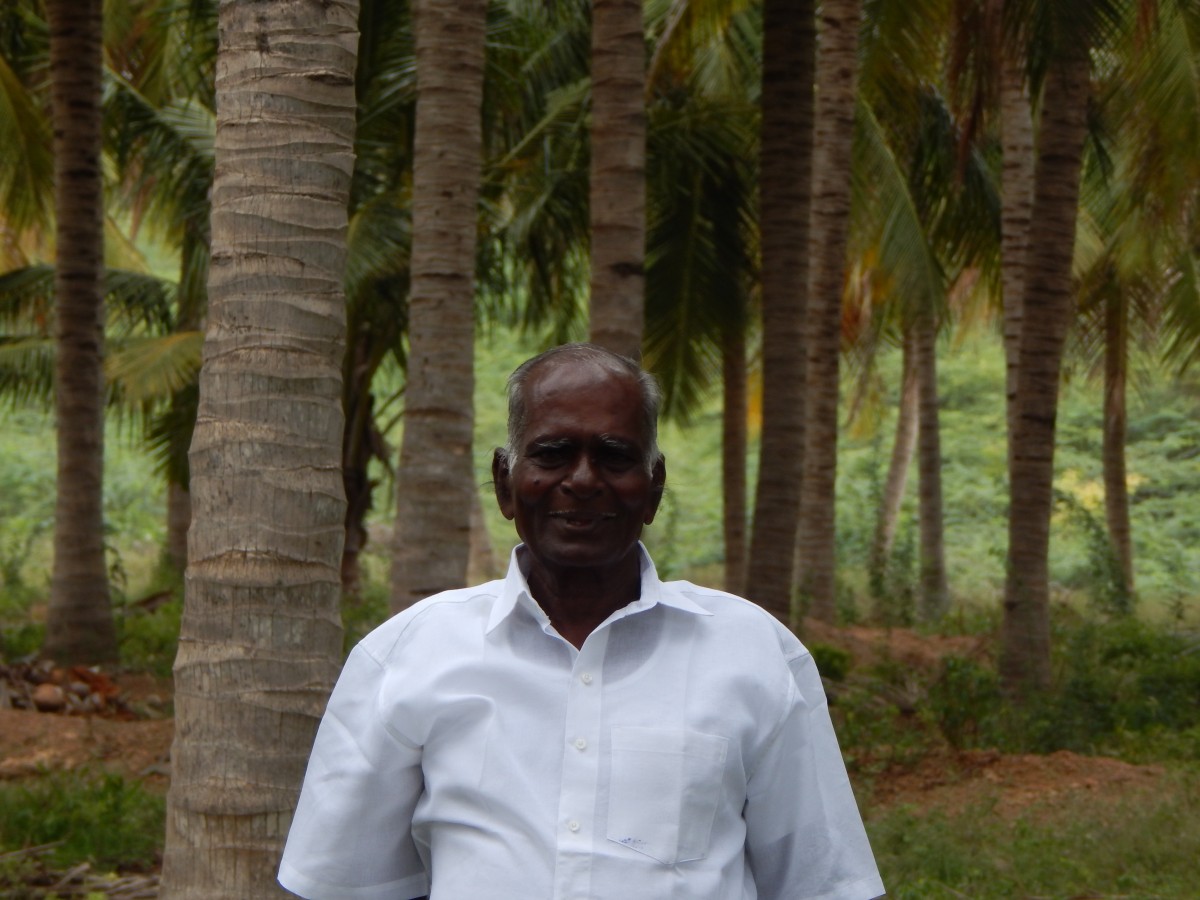 A. Eswaran, a 55-year-old farmer from Anaipalayam village in Tiruppur district, has two small farms on the riverbank where he has been able to grow only coconut trees and maize. Standing at the edge of his land, the chimney of a dyeing factory about half a kilometre away was visible against the sky. “In the early mornings, I can see foam on the river due to the chemical effluents,” Eswaran said. His son, E. Karthic, recalled memories when his family used the river water for their daily needs; now, the water is dangerous.

At the Orathupalayam dam further downstream from Anaipalayam, time stood still. Here, the environmental fallout of Tiruppur’s industrial success showed itself in concrete, inescapable ways. Dark greenish-brown water accumulated in pools and along the reservoir’s edges, stagnant, dirty and toxic. Flocks of tiny birds darted over the splayed forms of water hyacinth that had colonised the noxious tank. It was an eerie sight. 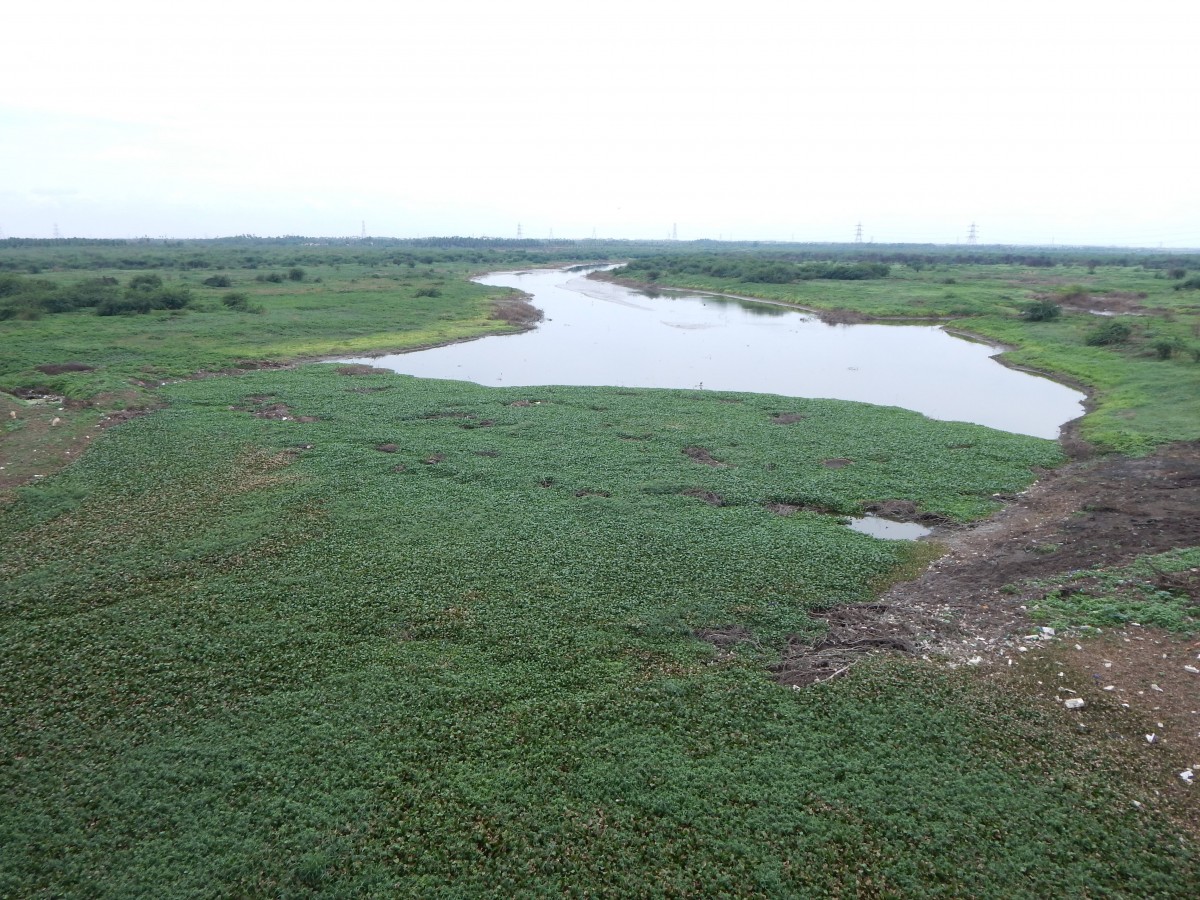 The bed of the Orathupalayam reservoir overgrown with water hyacinth. Photo: Neeta Deshpande

D. Karuppusamy, an activist who has been fighting to improve the state of the Noyyal, said the Orathupalayam dam, built in 1992, had been designed to irrigate an area of around 10,000 acres in Erode and Karur districts. “But farmers were able to use the irrigation waters only for a few years,” he said. “Afterwards, the dam waters became toxic due to the indiscriminate dumping of textile effluents into the river. For many years, the gates of the dam remained closed as farmers feared the impacts of its polluted waters.”

In 2005, when the gates were opened to take advantage of  the heavy rains and so dilute the pollution, the reservoir released hundreds of tonnes of dead fish and copious volumes of a poisonous sludge. “The area within a 20-km radius from the dam is severely polluted,” Karuppusamy said.

Today, the farmers don’t have an alternative source of irrigation because the dam’s reservoir hasn’t since been used to store water. As if the effluent discharge wasn’t enough, producing cotton textiles is a very water-intensive exercise. For a cotton t-shirt weighing 250 grams, researchers estimated a virtual water tag of 2,700 litres in 2005, including the impact of cotton farming and textile processing in terms of water use and pollution.

In his book When the Rivers Run Dry (2006), Fred Pearce investigated Tiruppur’s textile-processing units’ use and abuse of groundwater. During the 1990s and in the first half of the 2000s, some people had switched from farming to siphoning groundwater 24/7 to sell to the factories. According to Pearce’s book, in 2003, the water table was 1,000 feet below the ground and rapidly falling at about 50 feet a year. This thirst quickly became a dive to the bottom of the aquifer.

In response, in 2005, the Government of Tamil Nadu commissioned the New Tiruppur Area Development Corporation Limited (NTADCL), a water supply project on a public-private partnership model. NTADCL was empowered to bring water from the Cauvery-Bhavani confluence, less than 100 km away, to Tiruppur primarily for industrial consumption. But while this plan substantially lowered stress on local water sources due to the textile industry, there have been no efforts to understand its effect on the water security of the Bhavani basin.

This state of Tiruppur’s riverine and groundwater resources is a blot on its success as an export hub – a story that fits neatly into the celebrated narrative of India’s economic liberalisation. The recycled t-shirts that one of Tiruppur’s companies manufactured for the Australian Open make for a feel-good news report only until we remember that the city’s exports have extracted a terrible price from the region’s farmers, and from the Noyyal itself.

Neeta Deshpande is working on a book on the human and environmental story of cotton in contemporary India. She is a recipient of the 2018 New India Foundation fellowship.