As Floods Wash Over Assam, State Government Left Facing a Cascade of Disasters

State authorities have had an uphill task organising their response, even as they also deal with a Japanese encephalitis outbreak as well as the COVID-19 epidemic. 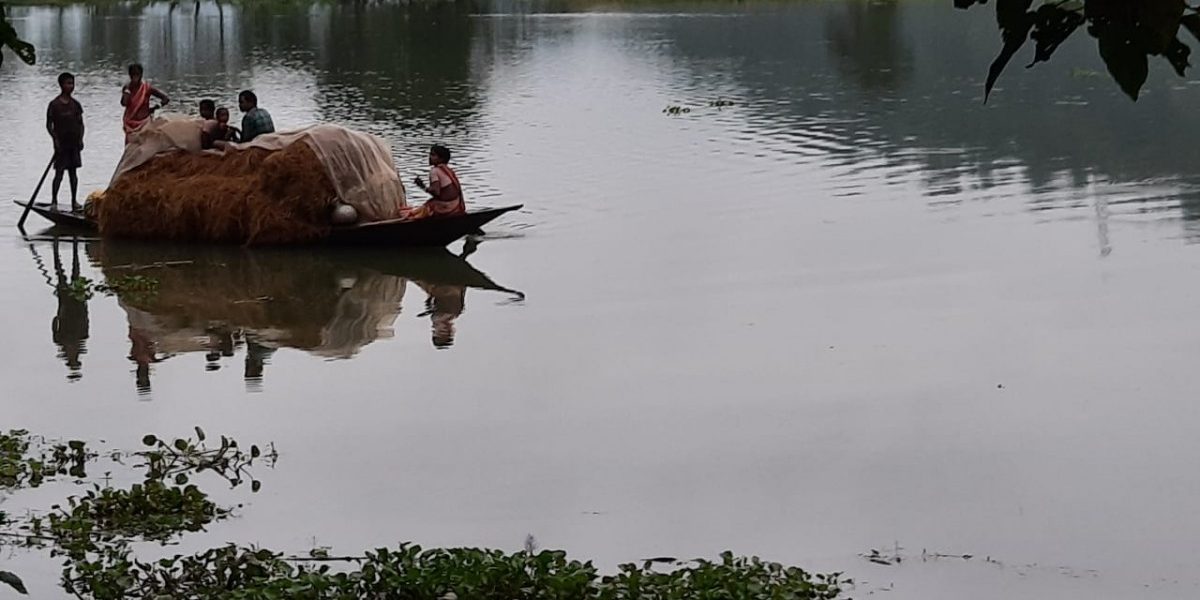 A flood-hit family from Morigaon district.

Guwahati: As a second surge of floodwaters washed over Assam since the third week of June, over 1.5 million people in 25 districts had been affected, the death toll had climbed to 34. Some 20,000 people have taken shelter in 270 relief camps across the state, according to sources at the Assam State Disaster Management Authority (ASDMA). The waters also took a heavy toll on livestock and affected over 87,000 ha of cultivated area.

The situation was exacerbated by Bhutan releasing over 2,700 cumecs of excess water from the Kurichu dam, which in turn inundated lower Assam districts like Barpeta and Nalbari. Three districts – these two plus South Salmara – have been the worst-affected in the current floods.

State authorities have had an uphill task organising their response, even as they also deal with a Japanese encephalitis outbreak as well as the COVID-19 epidemic. Before the floods, government officials had also been preoccupied with arranging quarantine facilities for people returning to the state from around the country, which were already in disarray thanks to Cyclone Amphan. 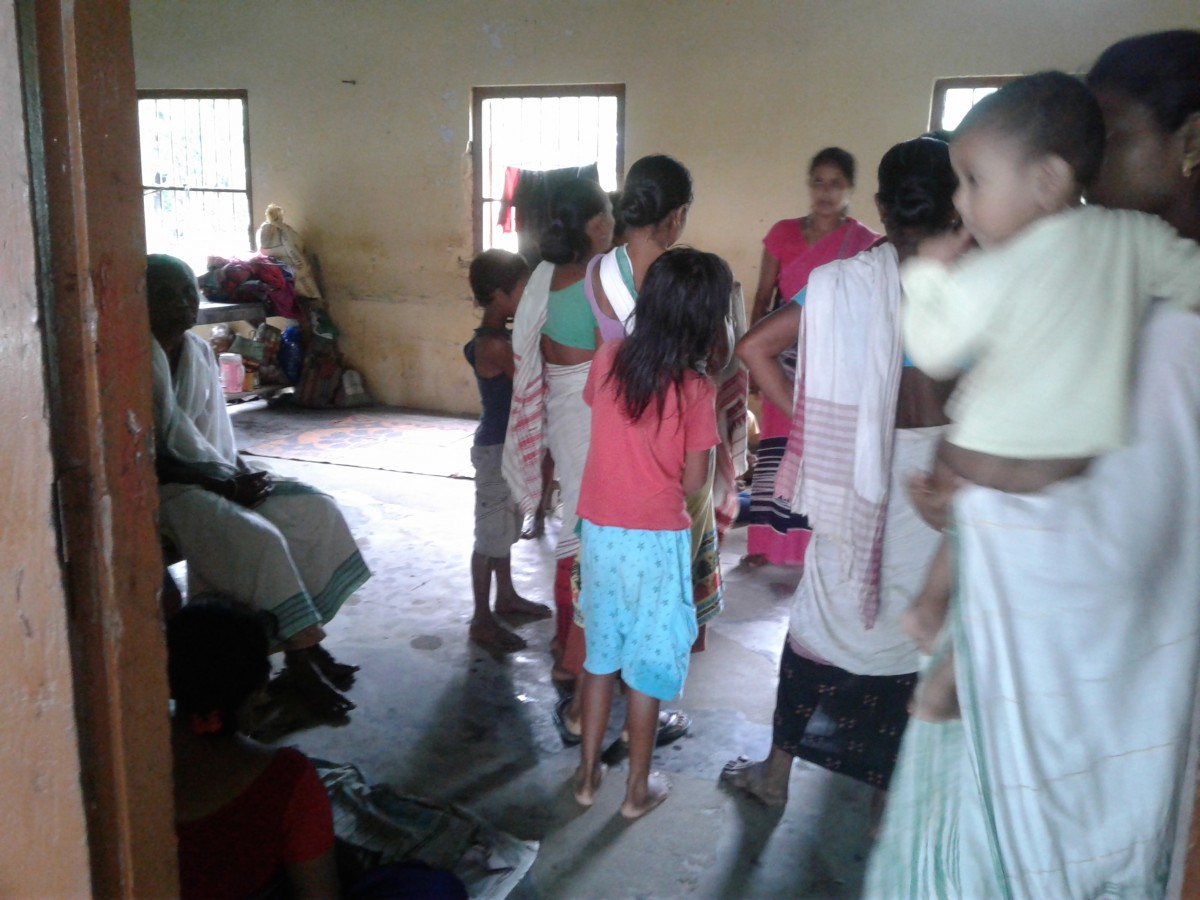 Inside a relief camp.

In early June, the blowout at Oil India’s Baghjan oil field in Tinsukia district caught fire, and has been burning since. However, floodwaters washed away the bridge connecting Doomdooma to Baghjan. In response, army personnel laid a Bailey bridge to keep emergency service vehicles from getting stuck on either side. Waters also entered shelters in Baghjan, Dighal Tarang and Guijan, making life harder for their 2,500 families.

“It has become an ordeal to even use the toilets,” one resident of a relief camp in Guijan said. “With living conditions worsening inside the makeshift relief camps, how can you think of physical distancing?” 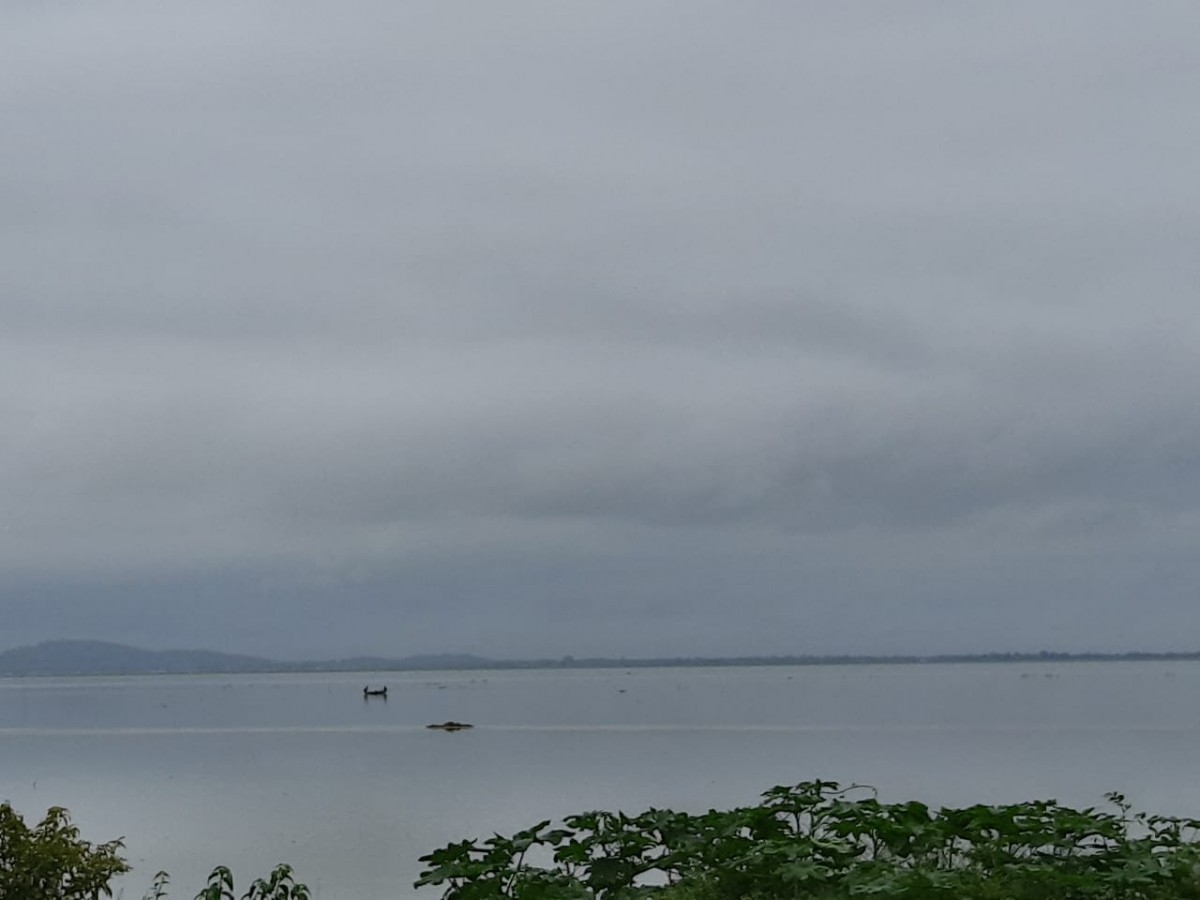 To protect against the novel coronavirus, ASDMA has drawn up a standard operating procedure for relief camps that specifies an ideal capacity to prevent crowding. But although ASDMA CEO M.S. Manivannan said that they were well-prepared to take on their double challenge, conditions in the camps tell a different story.

For example, in the camp set up at the Itakhuli Block Community Centre in Tinsukia, Birendra Bhagat – a father of three – died of fever on June 28. “He was not well. His health deteriorated after sleeping on the wet floor. He did not get any medical aid,” another resident of the camp said.

Also read: What Those Displaced by Baghjan Fire Need: Lessons From Relief Camps

The Dangori and the Dibru rivers wreaked havoc in Tinsukia and Dibrugarh while the Brahmaputra, flowing a little distance away, did so from Sadia to Dhubri district. After one woman in Dibrugarh district passed away, her family couldn’t find high ground and so had to perform her last rites on a boat.

Officials were able to recover the bodies of two workers, who had fallen into the overflowing Bisakupi river, on June 28, and villagers retrieved another body from the Dibru. The bodies of three more workers (aged 24, 30 and 48) are still missing. They had reportedly gone fishing on June 26 with five others when their boat capsized. 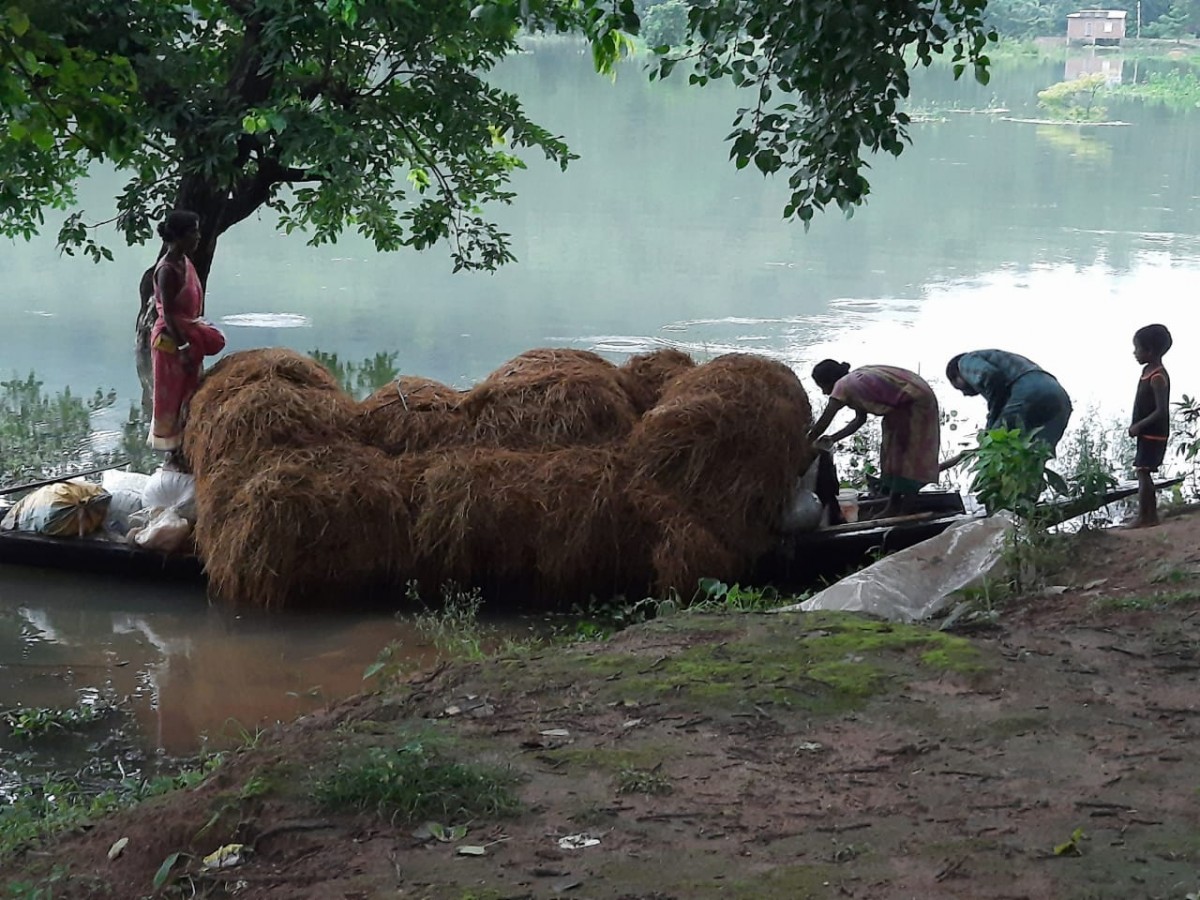 Collecting hay for livestock during floods become an ordeal.

Most of the protected areas in the state, including Kaziranga, Manas, Dibru-Saikhowa, Orang, Nameri, Pobitora, Laokhowa and Bura Chapori, are flooded. In the absence of good infrastructure and sufficient human resources, floods spell doom for the plants and animals in this area every year, even as forest officers need to contend with both water and poachers.

The Pobitora Wildlife Sanctuary has India’s highest concentration of rhinoceroses, and over 90% of it is currently underwater. “The forest department prepared itself well in advance for the annual event, but it has always been a tough time,” a range officer said. “With most forest camps inside inundated, it’s not easy to contain the wildlife casualties using boats.” The carcass of a female rhino was recently recovered from the Tuplung camp area. 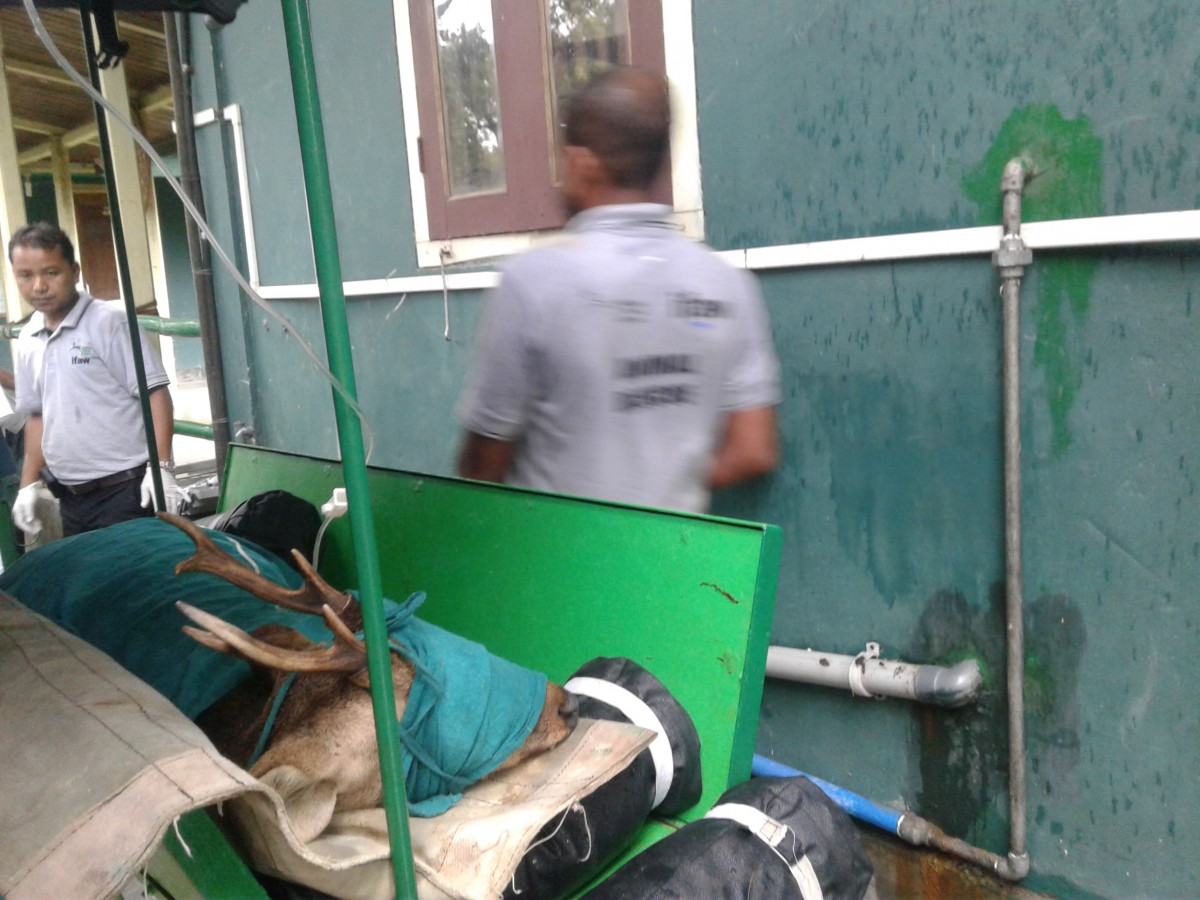 An injured deer being treated at the Centre for Wildlife Rehabilitation and Conservation in Kaziranga National Park.

The Brahmaputra is currently flowing over 70% of Kaziranga National Park. Locals have spotted animals crossing over to the adjacent Karbi Anglong hills to escape the waters. But in the process, a number of animals were killed or injured by speeding vehicles on NH 37, despite a speed limit of 40 km/hr. “Until now, 18 animals have been found dead and 13 have been killed by speeding vehicles on the highway,” according to park authorities. They also said they had recovered a rhino’s carcass from the park’s Agoratoli range.

The tributaries of the Brahmaputra and the Barak flood most of Assam every year, and Assam’s extent and duration of flooding is probably the most acute among India’s states as a result, with surges between April and September. The Assam State Action Plan on Climate Change (2015-2020) states that climate change plays a major role in worsening floods. This year, work on repairing and upgrading embankments and other anti-erosion projects had also come to a halt after the nationwide lockdown began on March 24. 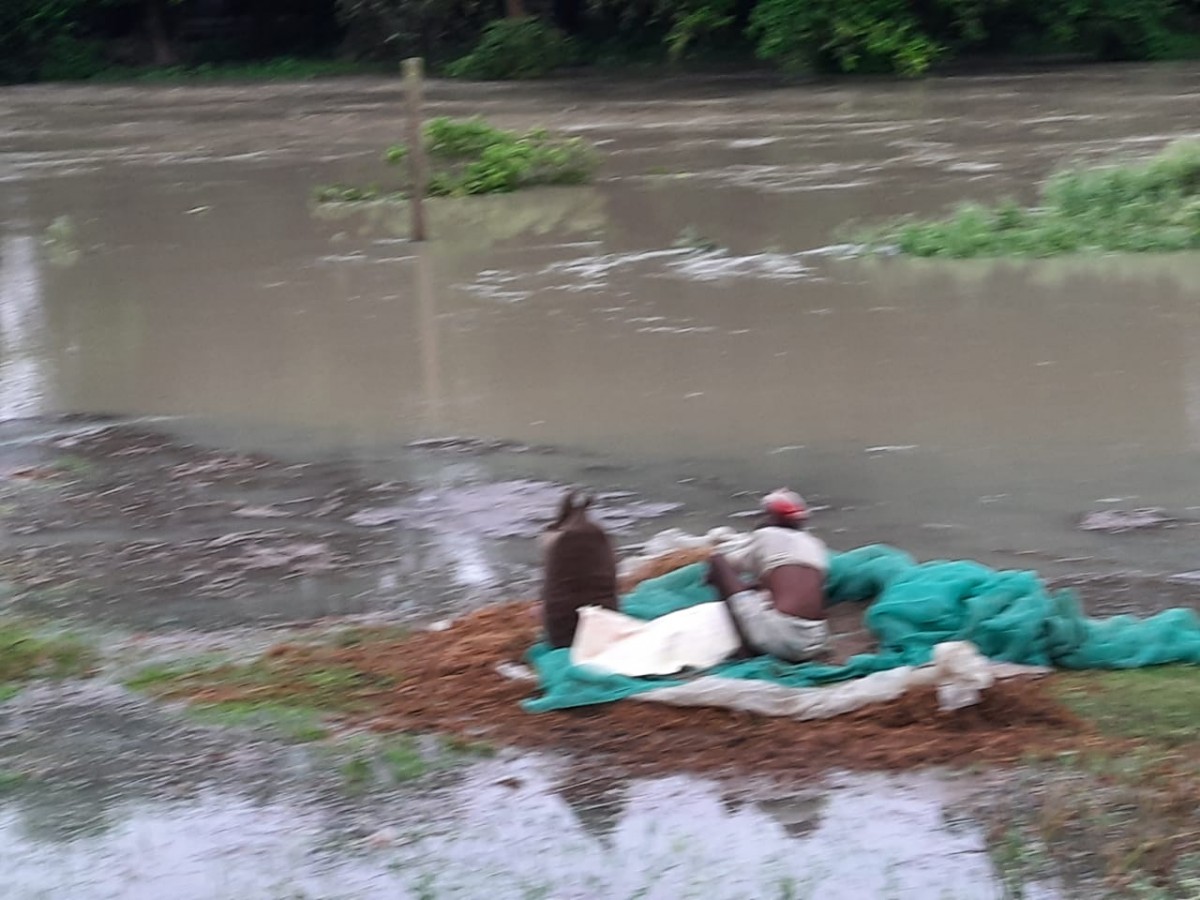 Two women trying to save rice paddy from being washed away.

Last year, Rattan Lal Kataria, the minister of state for Jal Shakti, which oversees water resources and rivers, informed Lok Sabha that Assam has nine of the 39 most flood-prone districts in the country: Dhubri, Lakhimpur, Morigaon, Dhemaji, Barpeta, Jorhat, Goalpara, Sivasagar and Nalbari.

Despite this being the case, Assam’s disaster preparedness remains nonexistent. While the state government has largely focused on short-term measures like damage assessment and relief, the floods repeatedly push the state to the brink of social and economic ruin in the absence of a holistic flood control mechanism.

All images by Mubina Akhtar.

Mubina Akhtar is a journalist and activist based in Guwahati.