Floods in the Time of NRC: A Toss up Between Life and Citizenship

The sight of people in Assam refusing to leave their submerged homes is a heartbreaking snapshot of the struggle to prove that one belongs to the land one considers home. A house submerged in Assam because of the flood. Photo: PTI

Growing up in Kolkata, I used to wait for the northwesterly winds and cloudy skies in the evenings; for the sultry afternoon sun to recede behind clouds, covering the city in long shadows. Then the rains came, hard pellets hitting the streets, pounding windows, strong gusts of wind blowing through the city. Memories of rain spattered afternoons – when Calcuttans unfurled their Mohendra Dutt umbrellas, walked in the downpour, water lapping at their feet, wind blowing against their faces – used to be a joyous prospect.

As the Earth heats up, rains grow harder, and floods become endemic, people watch the skies with anxiety, not longing. For tens of thousands, living along precarious coastlines and in low-lying areas, in houses of doubtful durability, the onset of the monsoon can be a harbinger of death and destruction.

In 2019, we find a new layer to this emerging narrative. This layer, inserted by politics, is currently playing out in the race to prove one’s citizenship in this country. At this moment, thousands of people in Assam, a majority of them poor, are living in houses where water levels have risen to alarming heights. But people in these submerged houses are unwilling to move to places of safety. They have the noose of a July 31 deadline tightening around their neck. The final National Register of Citizens (NRC) will be published at the end of this month, barely two weeks from now. Till then, flood-affected people – however vulnerable they are to rising, perilous waters – are resolved to guard their documents.

The situation is a toss-up between life and citizenship. You may survive the floods but still not be able to prove your bonafide claim to go on living in the country you have inhabited for decades. What would the survivor of a natural calamity do if she cannot escape the punitive fiat of a “strong” state? She may find herself transported to a detention camp, reduced to the status of a stateless refugee, having to move from place to place filled with anxiety and fear. Her destiny lies in the documents that may or may not prove her citizenship.

It’s heart-breaking when you think of the condition of these homes going under water. These are not glitzy advertorial apartments with swanky safes or lockers built in to ensure the safety of important belongings. Neither do many of those affected have bank accounts and secure vaults. A compassionate state (if that very invocation is itself not an anomaly) committed to protecting the poor and vulnerable would frame rules keeping the interests of such precarious populations in mind. But as history shows, it is the poor, who, without fail, who feel the brunt of ill-conceived policies.

An Indian Express report on Wednesday revealed the predicament of people trying to cope with the ravages of floods and the stringent citizenship test. Many of those stuck in flooded areas are simply refusing to leave their houses, said the report. Parvesh Kumar, a rescuer from the National Disaster Response Force (NDRF,) was trying in vain, for two days, to persuade Rina Begum, a resident of Tulsibari village in Assam’s Morigaon district, to leave her half-submerged house. “Over the last 48 hours, as rescuers shuttle her neighbours from their marooned homes to dry land, Begum, a 50-year-old grandmother of four, watched but remained defiant. “How can we leave our home?” she says, standing in waist-deep water,” the report states.

The reporter goes on to say, even when many families agree to leave their homes, they insist on ensuring the safety of their documents. It quotes Parvesh Kumar saying: “So many times, we brought them to safety only to go back again because they realise they have forgotten their document.” Land and home are defining identity markers in minority-dominated areas of Assam. “This could be one of the reasons that they feel so scared to leave their homes,” a local official told the Indian Express. 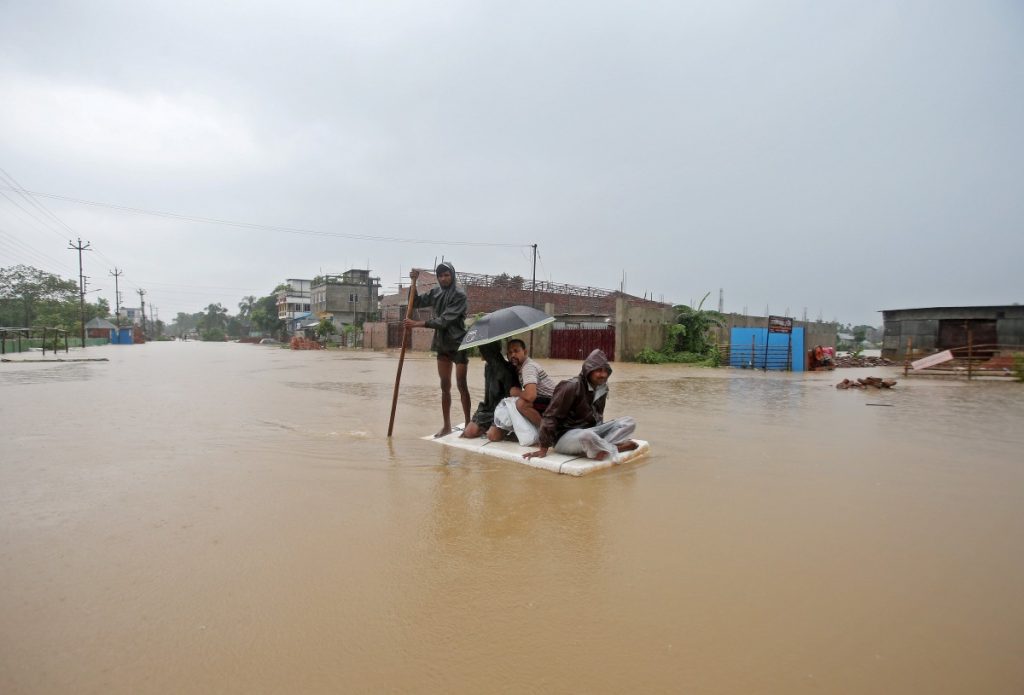 Villagers use a makeshift raft to cross a flooded area on the outskirts of Agartala, India July 15, 2019. Photo: REUTERS/Jayanta Dey

The convergence of floods and the last days and weeks leading up to the final NRC paint a picture of what the world is going to increasingly look like in the days, months and years ahead. Perpetuating cycles of migrants in search of safety and livelihood, refugees produced by climate change and state action will walk in lock-step. The crises of climate and culture will converge to create new refugees. Proving citizenship is going to become the next big battle ground, and the state will step up its demand to produce increasingly more documents to prove that one belongs to the land one considers home.

India knows the trauma of refugees, knows it intimately, and on many fronts. If the 1947 Partition, and the 1971 Bangladesh war of liberation produced one kind of refugees, the displacement of tribals by massive economic projects produced another mass of landless people. Stripped off their homes and lands, residents become migrants become refugees. Against this backdrop, the NRC has opened yet another flank, further muddying and complicating an already fractious political discourse.

This Tuesday, home minister Amit Shah once again indicated his government’s resolve to make the NRC a nationwide project. He was responding to a supplementary question raised by Samajwadi Party member Javed Ali Khan. “Currently, the NRC is a part of Assam Accord. The Centre – as per its election manifesto – is dedicated to weaning out illegal immigrants from every inch of this country. We will make sure that all such immigrants are deported as per international law,” said Shah.

The NRC’s implications are huge. It has set off new tensions in an already existing atmosphere of anxiety and fear. We are witnessing the trauma, bewilderment and helplessness of the people excluded from the register in Assam. It’s difficult to grapple with what the consequences of such a nationwide exercise and what they will look like.