On the morning of January 28, the river caught fire after an incoming delivery line of the Oil India Limited ruptured. 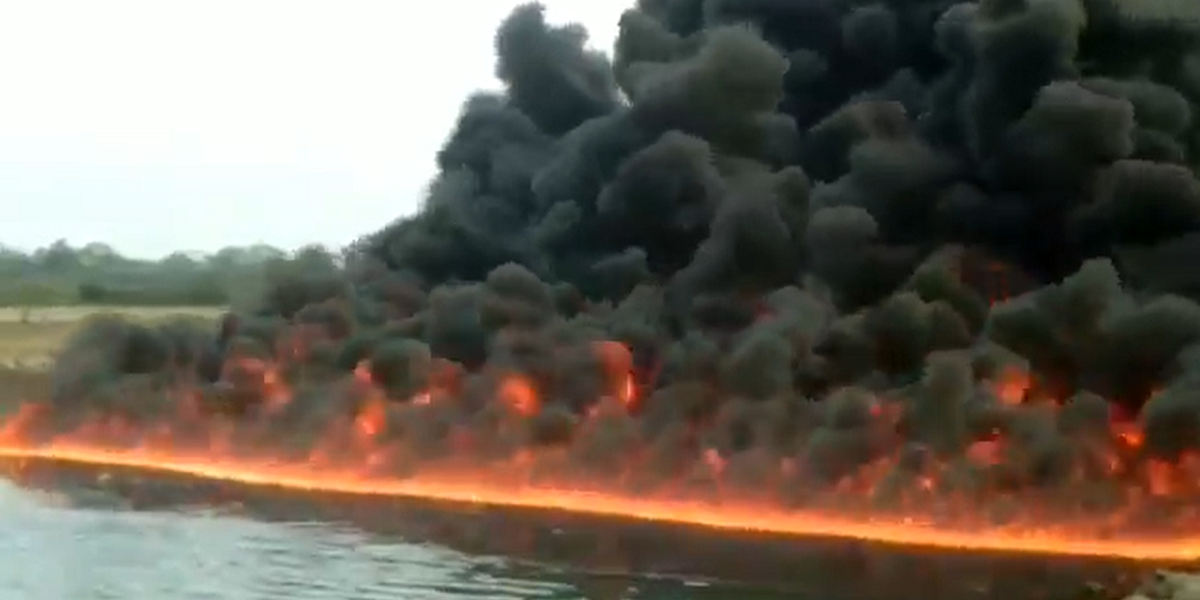 Guwahati: For the past few days, images of billowing plumes of black smoke emanating from the Burhi Dihing river located in Naharkatia in the upper Assam district of Dibrugarh has been played continuously on the local television news channel. Though the cause of the fire was mysterious at first, it was later ascertained that crude oil leaking from an underground pipeline into the river was set on fire by some miscreants. The fire ignited on February 2 and was doused a few days later.

The spillage of crude oil was from the incoming delivery line of the Oil India Limited (OIL). It had raptured due to sudden closure of remote-operated shut off valves and motor operator valves of inlets and outlets of all crude oil storage tanks. This particular incident occurred in the morning of January 28 at the Central Tank Farm (CTF) located in the field headquarters of OIL in Duliajan.

Fire on river. Burhi Dihing river caught fire at Naharkatia, Assam, due to oil pipe blast in last three days. But no one cares. pic.twitter.com/lym6NvNye7

A press released by OIL, released on February 3, stated, “Consequently, there was pressure build up in the incoming lines to the tanks and it was observed that leaks developed at 05(five) points within the periphery of the CTF. Leaks also developed  at two points in the incoming crude oil delivery line of one of the field installation near Duliajan. Immediate action was taken up to rectify the leakages and restoration jobs were undertaken. Actions were also initiated to recover/clean the spilt crude oil in and around the affected site. An enquiry committee has been set up to find out the underlying root causes of the incident and suggest remedial measures. Presently normal operations have resumed, and all leakages have been rectified and crude oil is being received from installations at CTF, Duliajan.”

The press release further states, “Spilled crude oil at one of the incoming crude oil delivery line which had raptured due to the incident in CTF somehow managed to trickle into the nearby Burhi Dihing river. It appears that some miscreants set fire to the oil floating on the river. Luckily there has been no casualties and the fire was doused on its own. The situation is absolutely under control now. A joint team led by circle officer of Tengakhat Circle, Dibrugarh district, state pollution control board, fishery department and experts from OIL is accessing any possible damage to the environment and necessary actions will be initiated on the basis of the observations of this expert committee.”

When The Wire reached out to the Dibrugarh district administration, an official said that an inquiry has been set up. “The inquiry is underway. Once it is complete, we will get a picture of what exactly happened,” said the official.

Padmanabh Baruah, additional superintendent of police (headquarters), Dibrugarh district, told Hindustan Times that the fire on the river surface started after the oil spill covered it. “It continued for a few hours and once the spilt oil got burnt, the fire subsided on Sunday [February 2] evening. Officials from OIL also reached the spot and stopped the leakage from the pipeline. Since the fire took place in the middle of the river, it didn’t cause much damage. No one was injured in the incident.”

Dibrugarh district’s deputy commissioner Pallav Gopal Jha told The Wire that human settlements in the nearby areas have not been affected and efforts are on to clean the spillage. “OIL is cleaning the spillage in the area for the past three days. Luckily, the leakage was plugged and that particular pipeline has been closed. Re-routing has been instructed. No human settlements were effected. We have taken the incident very seriously and OIL has been instructed to submit a plan to manage and avoid such incidents in the future,” said Jha.