Given that waste segregation and incineration come with their own drawbacks, the need of the hour is to identify a large plot away from human settlements that can be used as a landfill. 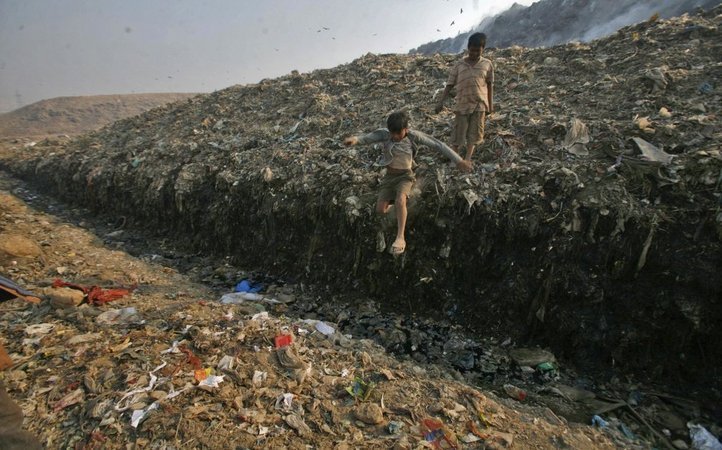 New Delhi: Mounds of garbage continue to pile up in large parts of Delhi after the over-40-metre-high Ghazipur landfill site was finally closed following a landslip that claimed two lives last week. The capital city has been left with few options on where to dump the over 10,000 tonnes of garbage it generates daily. While attempts have been made to open up new landfill sites at Rani Khera village in Northwest Delhi, these have met with resistance from locals who are mindful of the negative impact on water, air and soil quality created by dumping waste in the vicinity. The city’s garbage trucks literally have nowhere to go.

But this crisis is not new to Delhi. The current landfill sites at Ghazipur, Bhalswa Jahangirpuri and Okhla have been overexploited for over a decade more than they were meant to be used in the absence of alternate sites. Though the Supreme Court and the Delhi high court have been seized of the issue for nearly two decades, the current crisis is also a reflection of the manner in which the problem has been handled. Pulling up the successive governments or municipal bodies has clearly not helped much, as residents have resisted the creation of new garbage dumping sites.

Are the Asola Bhati Mines the solution?

Is there no answer to this problem? The answer probably lies in taking another look at the proposal to use the Asola Bhati Mines for the construction of a landfill. This is not a new idea. When the Supreme Court had in February 2000 directed the Union urban development ministry, the Delhi government and Delhi Development Authority to identify landfill sites, the Municipal Corporation of Delhi (MCD) had in July through then additional solicitor general submitted in the Supreme Court permission to dispose daily garbage at the abandoned Bhati mines in the Southern Ridge. However, rather than taking a decision on the matter, the apex court had transferred it to the Delhi high court along with a petition that had opposed the idea.

In September the same year, MCD had approached the Delhi high court seeking possession of 447 acres of the Bhati mines area for creation of an alternative landfill site, since this court had earlier in 1996 prohibited such usage of the ecologically-sensitive region. The site, it was said, would be able to meets Delhi’s solid waste disposal needs for 25 years.

Despite scientific studies, proposal was rejected

The issue dragged on and in 2011, the Delhi forest department and the environment ministry rejected the idea. As Delhi’s existing dumping sites continued to grow higher and more dangerous, the courts repeatedly took up the matter but failed to come up with solutions.

A high-powered committee was constituted by the Delhi high court in May 2013 to look into the issue, and subsequently DDA identified 11 new garbage disposal sites across Delhi with a total area of 600 acres. But the resistance to these sites located close to human habitation is indicative enough of the futility of the exercise.

Incidentally, 500 acres of this was in Asola Bhati Mines area. But while attempts are being made to operationalise other sites, not much progress has been made on the idea of using the Asola site.

UN had recommended the idea

Former Delhi municipal commissioner and chief secretary Rakesh Mehta has been one of the votaries of the idea to utilise this site properly. Two years ago, he had told The Wire that the project had been recommended by the United Nations and a feasibility study was also carried out by a Danish consulting agency, as well as by a Pune-based institute. However, the idea was opposed by environmentalists on the ground that the Bhati mines site is in an important water recharge zone.

Mehta had argued that the concerns of the environmentalists were unfounded as “the site was to be an engineered one. It would have been lined with concrete to prevent leaching or contamination of underground water due to seepage of garbage water. Also the construction debris and plastic waste would have been segregated beforehand and there was to be a composting plant for treating the organic waste.”

On the other hand, Gopal Krishna of Toxics Watch Alliance had noted that the MCD’s proposal to build a landfill at Asola had ignored the risk of contamination of water resources from leaching.

In an article on why a landfill site at Asola was not a good idea, Krishna had noted that “the proposal to create landfill in the Bhatti mines area is quite myopic because the area is a ground water recharge system for Delhi. This is an ecologically sensitive area and falls within Asola wildlife sanctuary. Instead of turning this area into landfill for waste, it should be conserved for ground water recharge.”

He had also pointed out the site lay in the vicinity of sensitive locations like the Asola Wild Life sanctuary and two villages, Sanjay Nagar and Balbir Nagar, and had cited an IIT professor’s study that had decried the idea of this landfill site by pointing out the dangers of dumping garbage in an ecologically-sensitive area.

With Delhi’s projected garbage generation expected to go up to between 17,000 and 25,000 tonnes per day by 2021, the city is need of urgent workable solutions.

While civic agencies and environmentalists keep talking about garbage segregation at the source and the government and civic bodies also talk about incineration as an answer to the problem, a closer look at these two “solutions” reveals that they are more of problems unto themselves.

Krishna had in his article mentioned that “out of the total waste produced in Delhi, close to 40 per cent is organic and can be converted to compost that could be used in agriculture; 15 per cent of the waste is recyclable material; and the remaining 25 per cent is construction waste, like debris and sand that can be reused. It is only a small percentage of waste materials that are either difficult to recycle or are non-recyclable such as tetrapacks, thermocol, wafer  bags, etc that poses a problem.”

However, the manner in which mountains of garbage have come up at the three dumping sites and manner in which garbage is dumped by people in open plots, parks, drains and even roads indicates that segregation and compliance to the norms are not easy in this city, where nearly 90% of all dwelling units have come up in an unplanned manner.

Also recent studies have shown that ideal solutions like composting of waste may sound good on paper but in practice they do not work. This problem is not restricted to Delhi alone but covers all the urban areas. Earlier this year, a parliamentary panel had recognised that while the move to turn urban waste to compost was a step in the right direction, it had failed to make much impact. It was pointed out that though the Ministry of Urban Development had set an ambitious target of October 2019 for converting all organic waste generated in cities into compost or biogas, and marketing the compost with the help of fertiliser companies, the project had run into hurdles with only about 1.6% of the total waste being composted.

As far as the issue of reducing waste generation through incineration is concerned, while governments and civic agencies support the idea, environmentalists remain opposed to it as they believe the emission of dioxins and furans from the incineration plants have a very negative impact on the health of those residing around them. At the same time, the burning of garbage at the landfill sites also remains a big issue.

In Delhi, when the foundation stone for the first incineration plant was laid in Okhla in 2010, then chief minister Sheila Dikshit had noted that the project was based on “a scientific, environment-friendly and state-of-the-art approach to waste management” and that “it will also address the issues of scarcity of land and shortage of power”.

However, the plant soon fell foul with the residents of nearby colonies and environmentalists. Among them was Krishna who said that Toxics Watch Alliance had been highlighting the “dangerous implications of this plant since March 2005” and who also alleged that experimental Chinese technology had been used in it.

In such a scenario, where composting, segregation and incineration come with their own set of troubles, it is clear that the need of the hour is the identification of huge sites – that are far removed from large human populations – for use as landfill sites. Despite its drawbacks, Asola now appears Delhi’s best bet in giving its nearly two-crore population a clean and hygienic life. However, the concrete lining of the site to curb leaching should be undertaken before it is put to use. It remains to be seen if this 17-year-old idea will finally rescue Delhi from the filth that lies strewn all around.