As rain picks up in the southern state, memories of December 2015 are likely to remain memories.

Preventive measures for flood mitigation have been carried out, claims the state. Photo: CRA, Tamil Nadu

With the monsoon almost upon the state, various departments of the Tamil Nadu government are scrambling to review preparedness. Meetings are frequent, with the chief minister, ministers and the chief secretary of the state going over whether all departments are on the same page with respect to rescue and relief operations if the need arises.

Tamil Nadu has suffered extreme weather events frequently, most discernibly since 2015 when south Chennai was flooded due to heavy rains and consequent flooding on the Adayar river. Since then, cyclones Vardah and Gaja, floods in Cuddalore and Nilgiris have ravaged various parts of the state.

The Lede decided to find out how ready the state is in terms of dealing with yet another extreme weather event should it arrive this monsoon.

“We are ready,” said K. Satyagopal, Commissioner of Relief Administration.

Satyagopal explained how the government went about a methodical process of identifying risk, forecasting risk, response to risk and reducing risk.

To this end, a massive exercise was carried out in the months following the Chennai floods of 2015. Vulnerable areas across the state were identified based on legacy data of rainfall, reservoir levels, rivers in the area and other factors. A source analysis of the problems in these areas were also carried out – was there a river that flooded in the past, was there heavy downpour or a cloudburst, was there a breach of a bund.

Also read: After the 2015 Floods, Chennai Only Exploited the People Who Were Cleaning it

Detailed maps of these vulnerable areas have been created and maintained by administrators who would be involved in rescue and relief operations.

“We have mapped down to the firka level in rural areas and to the ward level in urban areas,” said Satyagopal. “The CRA’s office along with the district collectors carried out this elaborate exercise.”

This team also took up data on the number and location of relief centres in the past in these vulnerable areas and the specific rainfall data at the time. Since the data was pooled, it has also been continually updated.

One of the key problems during the Chennai floods and the Gaja cyclone was the lack of quick rescue and relief operations. Many were stranded as authorities struggled to reach them. And with communications shut down, the task of rescue was made almost impossible.

To address this issue and to tide over technological failure, the state has put in place a network of people who would act as immediate responders during times of crisis.

First responders have been appointed and trained by the administration. These are residents in villages within vulnerable areas who would be the first to alert authorities in case of an extreme weather event.

These first responders have been trained under three categories – to evacuate people, to protect livestock and to plant trees during non-monsoon seasons while cutting away fallen trees during monsoon and cyclones.

First responders who are trained to evacuate people number 30,759 of which 9,162 are women. Those who are tasked with saving livestock numbered 8,624. Those who deal with trees number 3,824 across the state.

First responders form the backbone of the Inter Departmental Zonal Teams which are headed by either a Deputy Collector or the Tahsildar. Each team comprises police, fire services, an agriculture department official and a Public Works department official, amongst other departments.

Each team is in charge of six to ten vulnerable locations. The total number of teams formed in Tamil Nadu are 662.

“When we receive an IMD (Indian Meteorological Department) forecast about a possible extreme weather event, a team will be positioned in that area and they will be in touch with the first responders,” said Satyagopal. Maps of the area would be made available with these teams which would have the contact details of first responders, nearest police stations and fire stations on the back.

Apart from this, volunteers from NGOs like the Red Cross and the Sathya Sai Trust have been attached and trained with the IDZ teams to act as Disaster Response Guards.

The TNDRF has been trained for not only responding to natural disasters but also to man-made disasters, just like the NDRF.

The NDRF and the TNDRF have jointly trained new recruits in the police force in dealing with disasters as well. A total of 6,606 police personnel have been trained so far in rescue and relief operations.

The state has already contacted and reviewed preparations for natural disasters with hospitals, oil companies, mobile service providers and educational institutions to ensure they are not caught unawares.

COWs have been kept on standby. These are not the bovine variety but an acronym for Coverage On Wheels – towers mounted on vans with generators that can be deployed to areas where mobile connectivity has been snapped off during an extreme weather event.

The Tamil Nadu state government has also designed and developed the TN Smart app. This app is web-GIS based and combines big data analytics, machine learning and artificial intelligence to assess and alert citizens and authorities about risk.

The software uses satellite imagery, UAV (unmanned aerial vehicle) data which is being collected by Anna University and LiDAR) Light Detection and Ranging to provide accurate analysis of risk during extreme weather events.

Users of the app are two-fold – those that provide rescue and relief and the public which can use it in times of distress.

TN Smart mingles legacy and current rainfall, reservoir levels and other data to analyse and predict which areas are at immediate risk of flooding. Once authorities are able to get the exact picture of where flooding is likely to occur, messages can be sent out via TN Smart to the public in those areas as well as to the IDZ and first responder teams.

“We have built in a feature that forces the phone to ring even if it is on silent mode when an alert arrives,” said Satyagopal. “What if the emergency is at night? Most people and even officials will be asleep with their phones on silent.”

“Even during the day, sometimes officers may be in meetings with their phones on silent mode and may miss alerts. So we designed it in such a manner as to ring until the user manually switches it off. That way no one can miss the alert,” he said.

The Odisha and the Uttar Pradesh governments have shown an interest in adapting TN Smart for their respective states.

22 countries expressed interest to the RIMES (Regional Integrated Multi-Hazard Early Warning System) council which is chaired by India, to adopt the TN Smart model and tailormake it for their own countries.

According to Satyagopal, desiltation of water bodies and waterways has been carried out on a war footing to ensure higher capacity of water storage of water bodies, which helps in mitigating floods as well as in preventing drought.

32,399 water bodies have been desilted and restored by municipal authorities as well as by the Public Works department. The nutrient rich tank silt removed was to the tune of 7.44 crore cubic metres and this has been distributed to 6.6 lakh farmers for use in their fields.

Satyagopal says that an additional 2.62 TMC of water storage has been created as a result of this exercise.

“We have cleared 3174 kilometres of irrigation canals and river courses. 14,627 supply channels have been desilted. Blockages have been removed in 1,01,582 culverts and 6320 bridges,” said Satyagopal.

A policy decision was also taken to put in side vents for all bridges. This is to ensure that during times of high water flow under bridges, the structure itself will not collapse. 171 bridges across the state now have additional side vents.

Canals have been cleared of blockages. Photo: CRA, Tamil Nadu

Smaller engineering tricks have also been carried out in an effort to reduce damage cause by floods. For instance, pipe culverts are more prone to damage during floods. The government decided to convert these into box culverts and so far 7,048 such conversions have been carried out.

Floating garbage that clogged up water bodies and canals have been removed, flood regulators have been built to manage flow of water, encroachments have been removed in vulnerable zones and “cut and cover” models have been used in areas like Narayanapuram and Mudichur, to ensure that flood water flows below roads rather than above them. 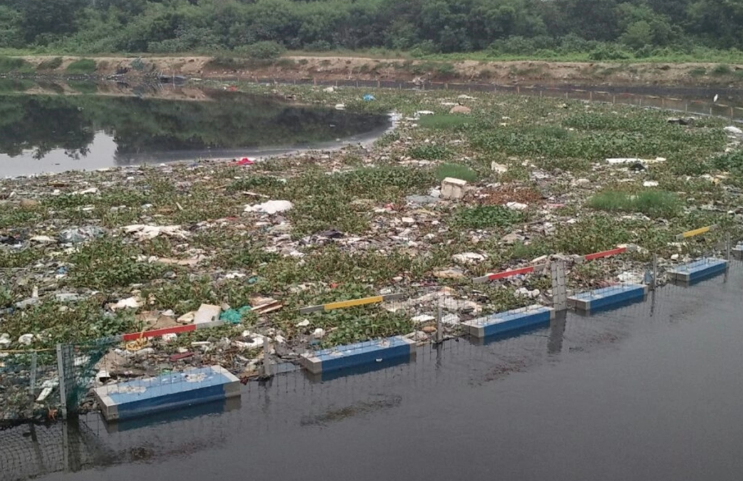 Long term flood mitigation efforts too have been worked on.

“As a special measure, this Government will take up permanent flood mitigation works like formation of reservoir across Orathur tributary of Adayar river with inter-basin transfer canal for water supply augmentation and flood mitigation near Orathur village in Sriperumbudur taluk; regrading of lower Paravanar river and formation of a new flood diversion canal from Aruvalmooku stretch in Kurinjipadi taluk; construction of new flood regulator across Coleroon river near Perampattu in Chidambaram taluk; construction of tail-end regulator across Upanaar river near Pitchavaram village in Chidambaram taluk to arrest sea water intrusion and ten other works at a total cost of Rs.284.70 crore in the coming year.” 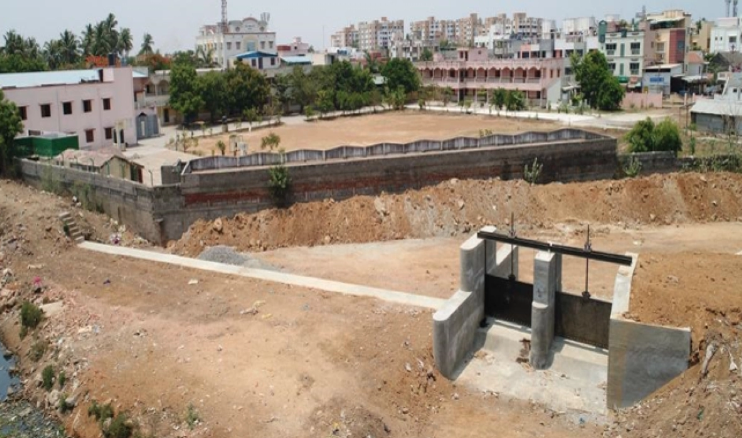 This allocation is apart from the previous year’s allocation of Rs 100 crore for flood mitigation works in Kancheepuram and Tiruvallur and Rs 290 crore for Greater Chennai.

The Aruvalmooku project in Cuddalore is now complete and provides connectivity from the river to the sea, which will help mitigate floods in the flood prone district.

With large parts of the state experiencing severe water scarcity in the summer gone by, measures have also been taken to prevent drought in the future.

The next step that district administrations will embark upon is to identify unused borewells and open wells in farmer fields and convert those too into recharge wells for better ground water.

In Orathur, an additional small reservoir has been built to store drinking water. This reservoir can hold 0.75 TMC of water. 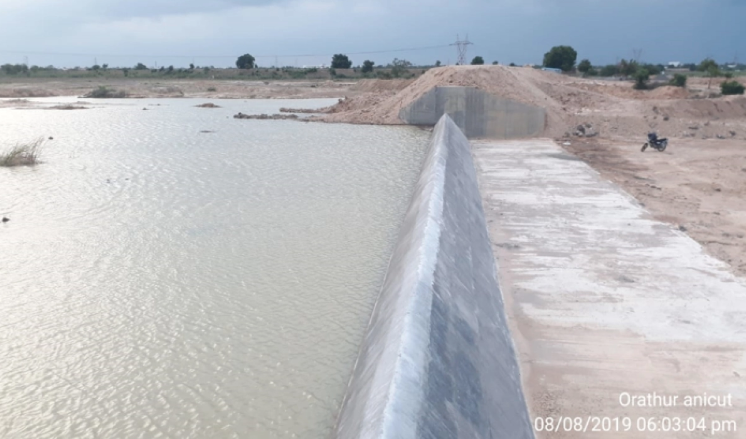 “We started with data collection and we have learnt a lot along the way,” said Satyagopal. “We want people to download and use TN Smart so that we can better communicate with people during crises and ensure that the impact of natural disasters is mitigated.”

Will all of these measures work though when the cyclone or the cloudburst strikes? Tamil Nadu has an impressive history of bureaucratic thoroughness and impeccable implementation.

Case in point is the massive rescue and relief operations that were launched successfully post the 2004 tsunami, when Indians did not even understand what the word meant.

The Tamil Nadu model was then hailed internationally as an example to be emulated, as the administration anticipated and battled the spread of disease in the wake of rotting corpses and survivors suffering from PTSD.

The administration though has been recently singed by singular criticism of its delayed response to the 2015 Chennai floods and to the Gaja cyclone of 2018.

The government of the day too is more secure now than it was since 2016 – the ruling party is united and there are no immediate challenges to the government before Assembly elections in 2021.

It is more than likely that the executive and the bureaucracy will be on its toes come monsoon this year.

And when Tamil Nadu’s officers so decide, it is not impossible that they will put in place a model for other states to emulate.

Tamil Nadu will find out in the coming months.

This article was published on The Lede. Read the original here.