Can Building Flyovers for Animals Reduce Wildlife Fatalities in India?

The solution provides a corridor for wildlife to migrate through, as well as reduce human-wildlife interactions.

Courts have taken an interest in making NHAI and other agencies create passages for animals. Photo: Kunal Sharma

The Dehradun-Haridwar national highway desperately needs a flyover to protect the Rajaji National Park it is adjacent to. From around 2000, the urban area of Dehradun has been expanding at an accelerated pace. The first casualties of this were the trees. Indeed, the city and its suburbs now choke the traditional elephant migration paths. But thanks to wildlife deaths along the highways cutting through the national park and an increasing number of devotees thronging the region during the Maha Kumbh and Kawariya festivals, the ecological stability of the national park has been under question.

One idea to resolve this problem has been to build an overpass for animals to walk over, instead of having to cross the highway and the railway tracks. In time, officials approved the construction of an elephant flyover, six metres high, between the Motichur and Chilla ranges of the park, allowing the animals safe passage. The Union environment ministry floated a tender and awarded the contract to Era Infrastructure. However, the company soon defaulted and the work came to a stop in 2016.

Since then, the half-finished flyover has remained like a scar on the region’s landscape, together with all the construction material. To make matters worse, highway truckers now use the parts of the highway that had been widened to make way for the flyover as resting spots, further disturbing animal movement. With traffic along this stretch having almost doubled in the last few years, it’s no surprise that many species of animals have become locally extinct as a result.

Also read: In Modi’s Constituency, a Wildlife Sanctuary is Quietly Being Erased

But after years of struggle, people in the area reported seeing signs of activity around the construction site. This was as a result of a warning issued by the National Green Tribunal, to complete the work expeditiously. The tribunal also directed the National Highways Authority of India (NHAI) to pay the environment ministry a sum of Rs 2 crore as a performance guarantee that the flyover would be built in time. This is welcome news.

There is considerable data available internationally suggesting that properly designed overpasses and underpasses can significantly reduce wildlife fatalities. These engineering solutions provide a corridor for wildlife to migrate through as well as reduce human-wildlife interactions, resulting in fewer conflicts.

With road agencies yet to show positive intent, courts have taken an interest in making NHAI and other agencies create such passages; however, such potential demands should be built into project costs and shouldn’t be inserted as afterthoughts. 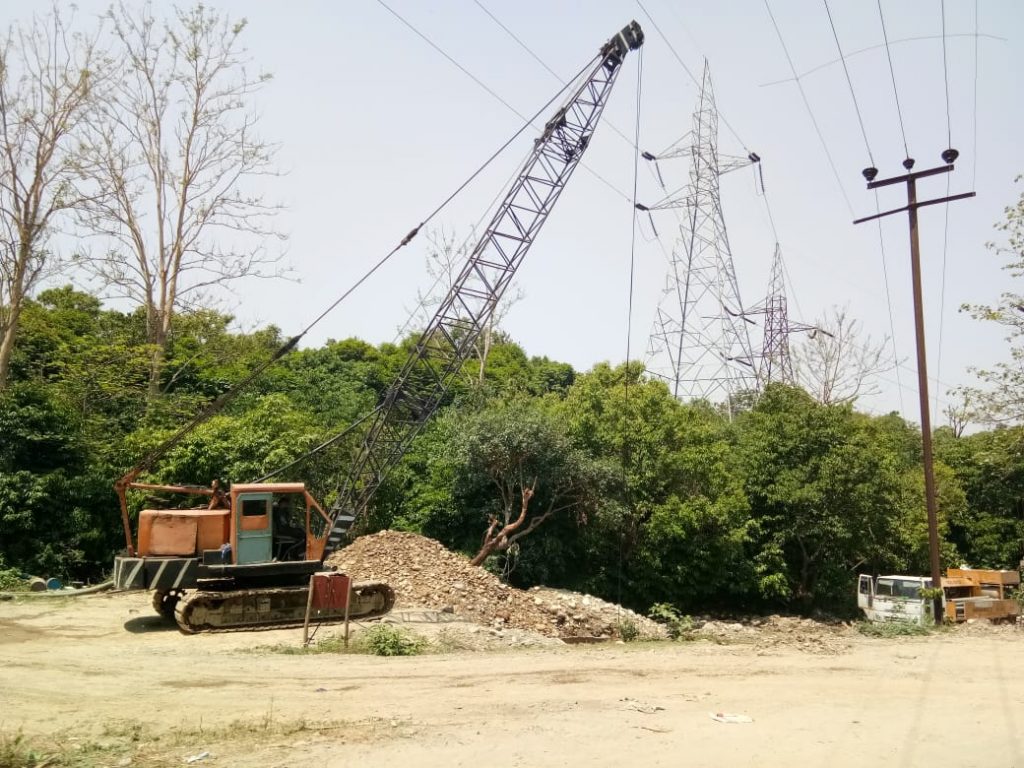 Unfortunately, flyovers could also be used as a political instrument. In such cases, they stand to harm wildlife rather than save it. Photo: Kunal Sharma

For example, consider the controversy surrounding the widening of National Highway 7, which runs through Pench National Park in Madhya Pradesh. The NHAI was initially against road-widening and the construction of flyovers, and finally consented to constructing truncated flyovers with wide gaps between them. The half-hearted measure has resulted neither in tigers getting adequate protection nor in providing an effective corridor along the national highway. The controversy has been exacerbated by a video of a tiger trying to jump across the crash barriers, in the first week of July 2019. The video has reignited the debate of the viability of constructing flyovers without considering ecological aspects in totality.

However, the key lesson is that there is no one-step, blanket solution as the recent controversy in Bandipur Tiger Reserve has underlined. Aggressively pushed by the Central and Kerala government, the project highlighted the futility of constructing a series of flyovers in a landscape which already has a traffic ban from 9 pm to 6 am. The opportunity cost of constructing flyovers would have had a significant detrimental effect to the health of the forest that is currently free of traffic for at least 9 hours in a day and as a result, the project has been currently shelved. The case points to the fact that as long as it is possible, there should be no intervention in the forest. Options such as flyovers can only be a last gasp effort to save a critical habitat when all alternative measures of mitigation fail in their purpose of protecting forest resources.

Unfortunately, flyovers could also be used as a political instrument. If planned for any purpose other than saving wildlife, such as the Telangana government’s Strategic Road Development Plan, which envisages cutting a large number of trees for constructing a flyover over the Kasu Brahmananda Reddy National Park, these concrete structures could become an easy tool for policy makers to sidestep local issues of conservation. A concerted citizen movement is currently underway in Hyderabad to protect the park while demonstrating the futility of constructing flyovers in the largest lung space of Hyderabad.

Also read | Tadoba: The Story of a Park Under Siege

It is a period of learning for India as the sample size is too minuscule to arrive at a definite conclusion. While NHAI, which earlier fiercely resisted increase in project costs seems to have realised the urgent need to build such structures, the Central government in a recent missive to all authorities responsible for road construction has asked them to avoid building roads in protected areas.

It is a small yet positive step as policy makers have started taking note of mitigation measures to reduce wildlife conflicts. It remains to be seen whether the model of building flyovers through Indian forests may end up becoming an effective instrument of governance after all.

Kunal Sharma works on issues of ecotourism and indigenous people.