Some species of fish specialised in eating fruits and dispersing their seeds far and wide 65 million years before birds and bats did. Now, they're disappearing from the water, threatening the survival of the forest. The tambaqui is the largest frugivorous fish in the Amazon. Credit: Rufus46/Wikimedia Commons, CC BY-SA 3.0

At its largest, the tambaqui (Colossoma macropomum) can match a small child in length and weigh much more. Like most large animals on the planet, this freshwater fish from the Amazon is increasingly threatened. Elizabeth Anderson, an aquatic ecologist at the Florida International University, worries that the growing number of dams in the Amazon will do them in, while Daniel Tregidgo, an independent conservation biologist, has found that way too many people have developed an appetite for the species.

Either way, the fish is in grave danger – and with it, possibly the Amazonian forest.

Nothing in nature is isolated. Relationships, whether symbiotic or antagonistic, are common. But what relationship could a fish and a forest have with each other?

The mighty Amazon river is fed by many tributaries that flow down the Andes mountains. From December to May, the rainy season, the rivers rushing down the mountains are engorged with rainwater. When they reach the plains and join the Amazon, there is so much water that the river spills onto the banks, flooding the forests lining its shores. This is no small flood. The river moves up to 20 km inland and submerges the forest under seven to 15 metres of water. The forests, which are home to several species of birds, mammals and reptiles, also provide refuge for several hundred species of fish for at least half the year.

These inhabitants don’t just take from the forest. Forests, particularly in the tropics, depend heavily on animals to spread and grow. Birds, bats and monkeys eat fruits and either drop, regurgitate or defecate seeds as they move through the landscape, helping young plants grow away from the trees that birthed them. It is a vital process that helps ensure greater genetic diversity. When the time comes for the next generation of plant species to reproduce, they can receive pollen from unrelated individuals instead of their parents.

“In most cases, fruit fall from the trees and the tambaqui consume it both at the surface of the water and also from the bottom,” Sandra Bibiana-Correa, an ecologist from the Mississippi State University, explained. “They also sometimes jump out of water and grab low-hanging fruit or those from shrubs.”

A fruiteater before birds 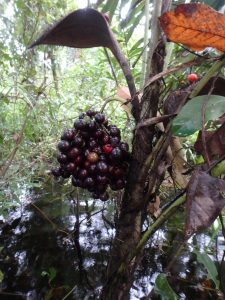 Bactris glaucescens, a palm species, fruits during the flooding season. The fruits fall into the water where they are picked up by frugivorous fish. Credit Sandra Bibiana-Correa

That fish eat some plant matter is well known. Several species of freshwater and marine fish will graze on aquatic plants, sea grass or algae and moss. But that fish in the Amazon were eating fruits of the rainforest trees was a missed detail, often relegated to a footnote, according to Bibiana-Correa. “Most ichthyologists don’t know plants and when they examine stomach contents of fish and find seeds or fruits, they just note it down as plant material,” she said.

It was only with a slew of studies in recent years, including Bibiana-Correa’s own, that ecologists started to understand the extent of frugivory. And ecologists have since recorded over 200 species of fish in South America eating the fruits of over 500 plant species.

The tambaqui can become important to the plant’s life in two ways. “As fish consume the fruit, sometimes they can chew, bite and damage seeds,” Bibiana-Correa said, making them seed predators that hamper a plant’s chances of reproducing. “But in many cases the seeds pass intact, like when you eat a tomato for instance.”

Some fish species seem especially good at this. The tambaqui are able to eat and defecate intact seeds of up to 100 plant species. The fish also move large distances, travelling from one patch of flooded forest to another carrying a stomachful of whole undamaged seeds, which they can then defecate in a completely new forest patch.

Yet little is known about hundreds of other fish species that also eat fruit and can possibly perform the same feat. “Most people studying frugivory only focus on birds and mammals,” Bibiana-Correa said.

In so doing, she points out that they ignore what could actually be an ancient relationship. Angiosperms, the typical flowering plants that produce fruits and seeds, evolved around 250 million years ago and then branched out to become the thousands of distinct plant species around 120 million years ago.

Several frugivorous fish species appeared around the same time, developing physical traits designed to help them eat fruits. For instance, the pirapitinga (Piaractus brachypomus) is closely related to piranhas and, as a juvenile, appears similar to its aggressive carnivorous cousins, a surefire way to keep predators at bay. But had any fish risked approaching a pirapitinga and examined its teeth, they would have found large blunt molars, perfect for crushing and grinding seeds and nuts, instead of the razor-sharp incisors that piranhas are known for.

These traits have remained stable for millions of years. Fossilised records of teeth like those of the pirapitinga indicate that these fish started specialising in fruit-eating a 100 million years ago. In contrast, many of the frugivorous birds and bats that we know today appeared only 10-35 million years ago, according Bibiana Correa.

However, though they are new to the game, there is no denying that birds and bats are most responsible for seed dispersal across the planet; seed dispersal by fish has thus far been documented only in South America. “There are frugívorous fishes in almost every continent,” said Bibiana-Correa, “but the biogeography of the South American wetlands make them particularly good to support the evolution of fruit-eating fishes.” 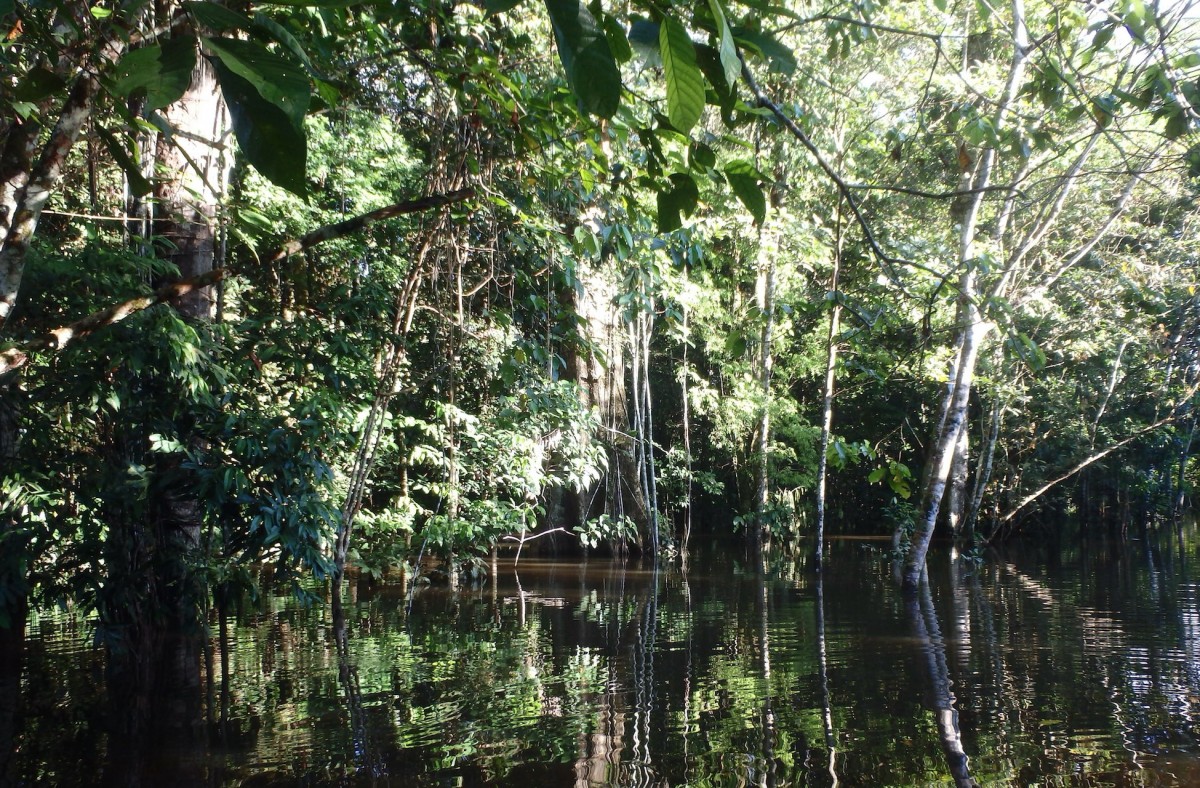 Inside a floodplain forest. Rivers swollen by rains flood the rainforest and make way for fishe to enter an otherwise inaccessible habitat. Credit: Sandra Bibiana-Correa

Unlike in other parts of the world, wetland forests have persisted in South America, especially near the equator, for millions of years aided by a stable climate. Rivers crisscross the entire continent, frequently blurring the lines between land and water. The attendant history of flooding has been vital to ensuring a successful relationship. Several species of trees in the floodplain forests synchronise their fruiting season to coincide with the flooding.

But it is not just fish that are attracted to these flooded forests.

Manaus is a large bustling city located in the heart of the Amazonian flood plain forest in Brazil, only accessible by plane and boat. From the city’s shores, the Rio Negro can be seen meeting the Amazon. Daniel Tregidgo spent his PhD years traveling the city and the neighbouring floodplains on fishing boats, studying the city’s impact on the surrounding flora.

“Large tambaqui is the most valuable fish per kilogram in Manaus,” Tregidgo said. The species along with other fish are mainly caught in the flooding season. “Many of the targeted species are frugivores. Local fishers know that fish eat fruits, and they target them under fruit trees in the flooded forest, and even make splashing sounds to imitate fruit falling to attract them.”

In 2017, Tregidgo found that the constant demand had emptied the waters around Manaus of large tambaqui while driving up their price and demand. So fisherfolk had to travel further away from Manaus to find tambaqui that were big enough. “This is important,” Bibiana-Correa said, who found that, in the other flooded forests in the region, removing large fish had a greater impact on the seed dispersal relationship. “We could lose up to 40% of the plants,” she estimated. Whether in birds, mammals or fish, larger frugivores were the most important seed-dispersers. They could eat more fruits, disperse both large and small seeds and they could larger distances as well.

When the floodwaters recede, the people of Manaus have to make do with farmed tambaqui. Meanwhile, the largest of the wild ones migrate large distances, travelling from the plains to the fast-flowing mountainous parts of the rivers to breed. It is an opportunity to transport plant species over hundreds of kilometres.

But for the fish that escape Manaus, the journey is rife with obstacles. From the mountainous headwaters of the Andes to the Amazon they ultimately join, Elizabeth Anderson has recorded 302 dams in various stages of construction. She believes that these structures could cut up the vast Amazon river basin and disrupt the migratory routes of the fishes. Several patches of flooded forest would simply become lost to the tambaqui.

Few solutions are apparent right now. Anderson is attempting to understand the migration routes that the fish take and environmental challenges along the way. Perhaps this will give some insight into how better to plan hydroelectric projects. Bibiana-Correa thinks highlighting the tambaqui’s and other fishes’ roles in seed-dispersal could garner support for their protection in places like Manaus, but Tregidgo is not too sure.

Large wild tambaqui are actually out of reach for most of Manaus’ lower- and middle-income residents. For the wealthy, the wild tambaqui is appealing precisely because of the fish’s fondness for fruits. “Many people talk about how they prefer wild tambaqui because the flavour is better,” Tregidgo says. “So if they can, they will buy wild fish.”

Bhanu Sridharan is a freelance journalist interested in writing about climate change, biodiversity and ecology.