Air Quality in North India Is Already Hazardous, but the Worst Is yet to Come

The PM10 levels and PM2.5 levels are almost seven times the WHO prescribed limit. With peak crop burning yet to begin, air quality is expected to dip further.

New Delhi: On Thursday morning, air quality in Delhi slipped to its worst this season and is predicted to get much worse in the coming days. Pollutants called PM10, which are fine enough to enter and lodge in our lungs, was recorded at 369 according to the Central Pollution Control Board (CPCB). That is seven times the World Health Organisation (WHO) prescribed limit. Pollutants called PM2.5, which are finer still and can enter the blood stream via the lungs, was recorded at 168 – almost seven times the WHO-prescribed limit.

The Air Quality Index (AQI), which provides a figure based on the levels of eight different pollutants, has also seen a steady increase over the last few weeks and touched 339 on Thursday morning, according to the ministry of earth science’s System of Air Quality and Weather Forecasting and Research (SAFAR).

In India, an AQI between 301 and 400 falls in the ‘very poor’ category. There is one category left to breach – the ‘severe’ category, which requires the AQI to climb above 401.

Dangerous air pollution levels are not restricted to Delhi or the National Capital Region, but, are a reality in most parts north India. Of the 68 cities for which CPCB released data for October 24, only 13 had AQI levels lower than 100, while 10 recorded AQI levels above 300. 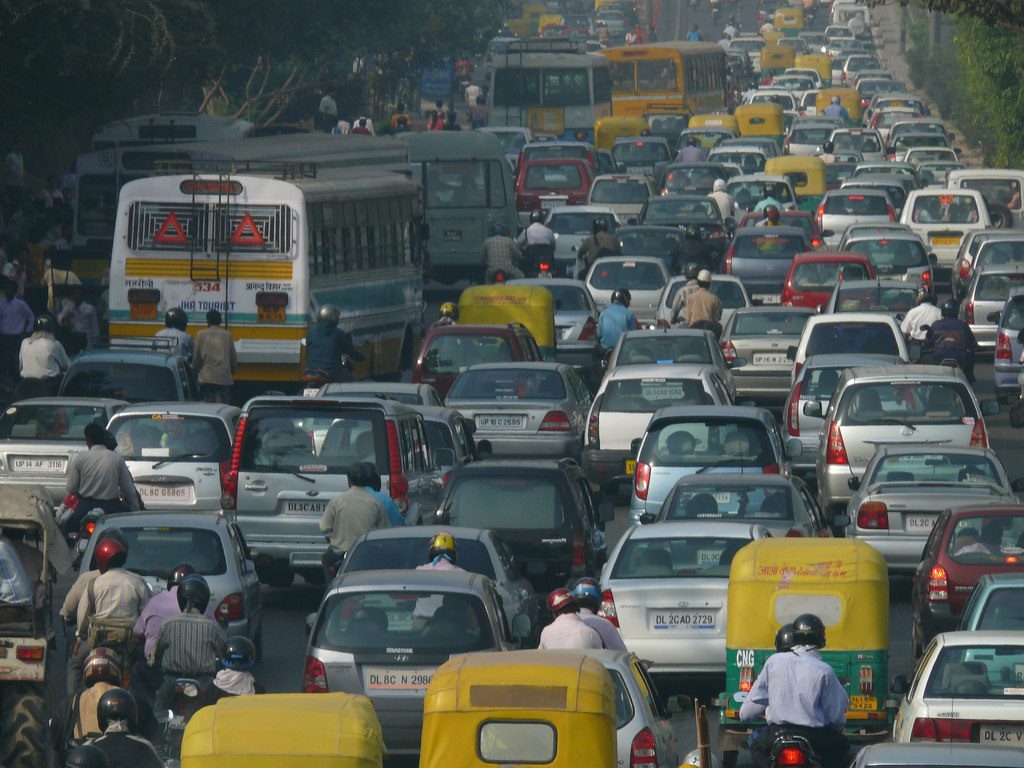 A traffic jam in New Delhi. Vehicular emissions are a big source of Delhi’s air pollution. Credit: lingaraj/Flickr, CC BY 2.0

According to the CPCB, on Thursday morning PM2.5 levels – which should remain below 25 according to WHO –in Kanpur had touched 500 – the maximum that the scale can record. In Madhya Pradesh’s Singrauli PM10 levels were at 249 – five times more than the WHO limit.

During early winter each year, most of north India suffers a spike in pollution levels due to change in weather patterns and crop burning in Haryana, Punjab and parts of Uttar Pradesh. Paddy farmers in north India burn the stubble and loose straw left over in their fields after the kharif harvest, in order to ready the field for sowing in the rabi season. This increases the pollution levels. A dip in temperature coupled with low wind-speed tends to trap air pollution closer to the ground.

As temperatures have dipped, this year too north India is suffering due to hazardous air quality. The worst, however, is yet to come. According to SAFAR, the AQI for Delhi is going to go beyond 350 on Friday with certain regions within the capital breaching the 400 mark.

“The next few weeks are going to be worse. Peak crop burning will begin now. Then, we have Diwali in the first week of November which is going to further increase pollution levels,” said a CPCB official.

The Indian Express recently reported that fire incidents during the stubble burning season this year have been lower than previous years. Between September 1 and October 23, fire incidents dropped 55% compared to last year.

However, according to Ramandeep Singh Mann, an agriculture expert who divides his time between Delhi and Punjab, the peak stubble burning is yet to happen. “This season we had rains late in September and the harvest was delayed by a couple of weeks because of that. The peak harvest will happen now and that is when we will see peak crop burning,” he said.