As per the India Meteorological Department, heat waves will continue over areas including south Haryana, Delhi and west Rajasthan till April 7. 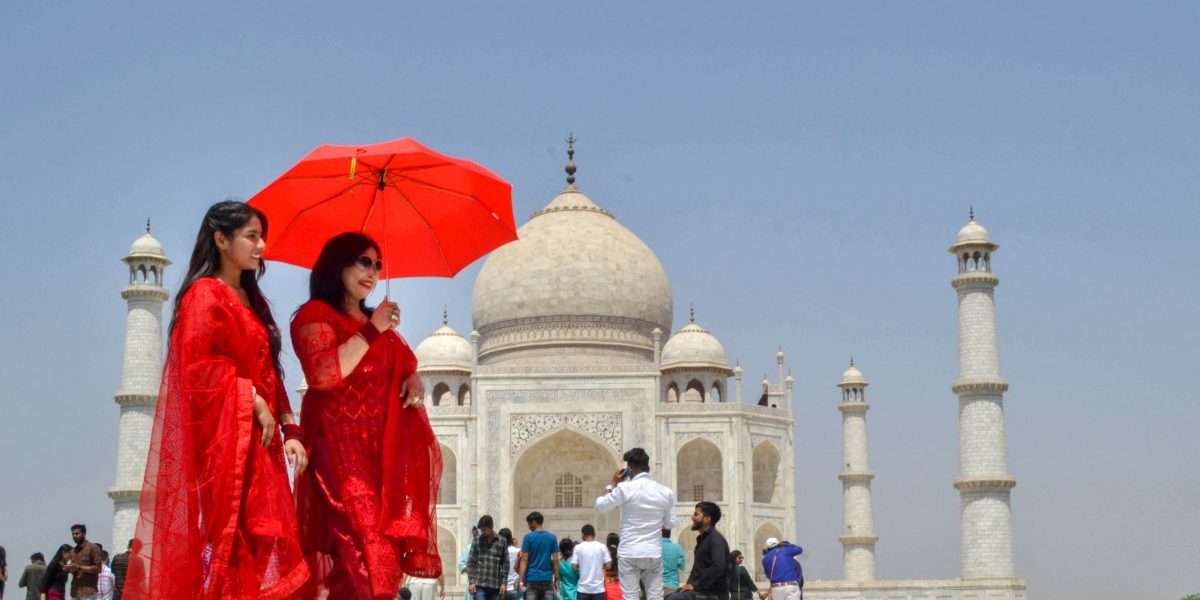 Women cover themselves with an umbrella to avoid the scorching heat of sun, at Taj Mahal, in Agra, Saturday, April 2, 2022. Photo: PTI

Kochi: India and particularly its northwest – including the national capital – witnessed the hottest March in the last 122 years in 2022. Delhi will have no respite for the next few days either: heat wave conditions will continue over these areas till April 7. This is according to the heat wave forecast warnings put out by the India Meteorological Department (IMD) on April 3.

India witnessed a very hot March, as The Wire Science reported. The temperatures are breaking all records in northwest India, the IMD has found.

The region witnessed the hottest March in 122 years, with many places here recording high maximum and minimum temperatures during the month, said the IMD in a press release on April 2.

Unusual wind patterns and lack of rainfall could be causing these heat waves, O.P. Sreejith, head, climate monitoring and prediction group at IMD, Pune, told Hindustan Times. He added that it could be a result of global warming, too.

Such periods of unusual heat – called heat waves – can impact human health adversely. As per the IMD, a heat wave occurs when temperatures depart from normal by 4.5º to 6.4º C in a region. If temperature deviates from normal by more than 6.4º C, the region is said to be witnessing a ‘severe’ heat wave. The IMD also classifies a region as witnessing a heat wave when the maximum temperature reaches at least 40º C or more if it is located in the plains, or at 30º C or more in the hills.

According to the IMD forecast as on April 3, western Rajasthan will continue to witness severe heat waves in some pockets today and tomorrow. During this time, heat waves will also prevail over parts of Delhi, east Rajasthan, some parts of Jammu, Himachal Pradesh, south Haryana, Uttar Pradesh, Madhya Pradesh, Jharkhand and Gujarat. On April 3, Barmer (in west Rajasthan) recorded the highest maximum temperature in the country, at 43.6º C. Temperatures rose by 1-3º C at many places in east Uttar Pradesh, Assam and Meghalaya, as of the last reading taken by the IMD at 2 pm on April 3.

There will be no immediate respite for parts of Delhi, south Haryana, Uttar Pradesh and Rajasthan. These areas will continue to face heat waves till April 7 (there are currently no forecasts from the IMD for after this date, since their heat wave warnings are provided only over five-day spans).

Heat waves on the rise

India has been seeing more heat waves in recent years. And they are now occurring in areas where they didn’t before. A study published last year by scientists at the Banaras Hindu University’s Mahamana Centre of Excellence in Climate Change Research found that heat wave patterns in India have shifted, with a significant increase in heat waves in northwestern, central and south-central India. Madhya Pradesh recorded the highest frequency (at 0.8 heat wave events every year). The study also found a spike in heat-related deaths, from 5,330 deaths reported during 1978–1999 to 3,054 deaths in 2003, and 2,248 deaths in 2015, reported The Indian Express. Such heat wave patterns “may pose a grave risk to human health, predominantly on the vulnerable sections of the society”, the authors of the study wrote.

India will see more heat waves over the years, a prominent climate report warned in August last year. The first report in the three-part Sixth Assessment Report (AR6) by the Intergovernmental Panel for Climate Change (IPCC), a UN body, warned that India would see more frequent and intense extreme weather events – including heat waves. The second IPCC report released in February also warns that exposure to extreme heat is expected to become more frequent, intense and long-lasting in South Asia, increasing the likelihood of droughts in arid areas. The third and final IPCC report in this series will be released tonight.