If It Stinks To Be Greater Adjutant Storks, It Must Mean We're Neck-Deep In Filth

How well we have failed that garbage, our dirtiest possessions, ends up inside sanctuaries, our cleanest places! 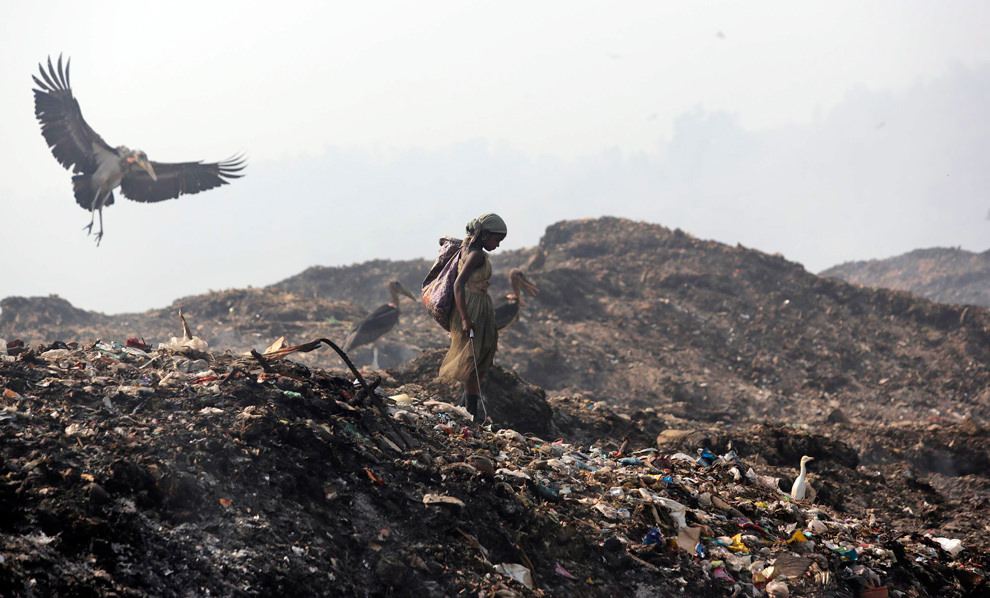 A solid-waste landfill in Guwahati, Assam. Credit: jordibernabeu/Flickr, CC BY 2.0

The National Green Tribunal has issued a notice to the Assam government on the mass death of 26 greater adjutant storks at a garbage dump adjoining Deepor Beel, near Guwahati. There are two ironies here: the Greater Adjutant, a towering, endangered stork standing over five feet tall, has been routinely documented to be subsisting almost entirely on trash in Guwahati. This is a tragicomic adaptation for a hunting and scavenging bird that otherwise eats fish, rats and snakes. The second irony is that nearly all of Guwahati’s waste is illegally going into Deepor Beel, a wetland that is notified as a sanctuary and internationally considered to be important.

Sanctuaries and protected areas are meant to have eco-sensitive and buffer zones with minimal human intervention and pollution. This is not the case for Assam’s Deepor Beel, where the state government has not taken effective steps to safeguard the small sanctuary area.

One of the approaches to the beel, a permanent freshwater lake, is through Guwahati’s garbage dump. The trash simmers in huge mountains, putrefying in the heat and flowing into the beel and freshwater marshland. Several notices have been served to the municipality to relocate the dump. In 2012, the chief wildlife warden of Assam wrote a letter to the commissioner of Guwahati Municipal Corporation stating that garbage was harming the wetland and that dumping garbage in a wetland was prohibited under the Wetland Rules. The warden also asked for the garbage dump and a solid-waste treatment plant to be relocated away from the eco-sensitive area of the wetland.

In 2017, the mass death of 26 Greater Adjutant storks raises the obvious question: with growing garbage and pollution, what is the future of scavenging birds?

Some would say that birds adapting to eat garbage is a form of reconciliation ecology in an increasingly anthropogenic environment. With the human footprint growing everywhere, carnivorous birds eating non-vegetarian trash seems like some kind of an adaptation.

For instance, the presence of storks in garbage dumps in Guwahati has come to be so accepted that the state government and civil society are using the dump as release sites for birds. The same dump is also the repository for biomedical waste, which veterinarians say could potentially kill any animal if it were to be ingested. In 2016, a Greater Adjutant chick that had fallen out of its nest was nursed back to health. When deemed fit for release, it was let go in a garbage dump in Boragoan area of the city, which in turn leads into Deepor Beel. While the chick would be surrounded by trash, there was also a colony of storks living in the area to keep it company.

It is still not clear what happened to the storks in Guwahati. Per preliminary results, the death doesn’t seem to be from avian influenza. While toxic poisoning is the most common guess, there may also be a slim chance that the birds died of a viral disease. The Deepor Beel phenomena of storks feeding continuously on garbage has been seen as both peculiar and surprising – but most agree that it is not natural. Usually storks fly long distances to find food, which also helps in population intermixing and so avoiding genetic inbreeding. 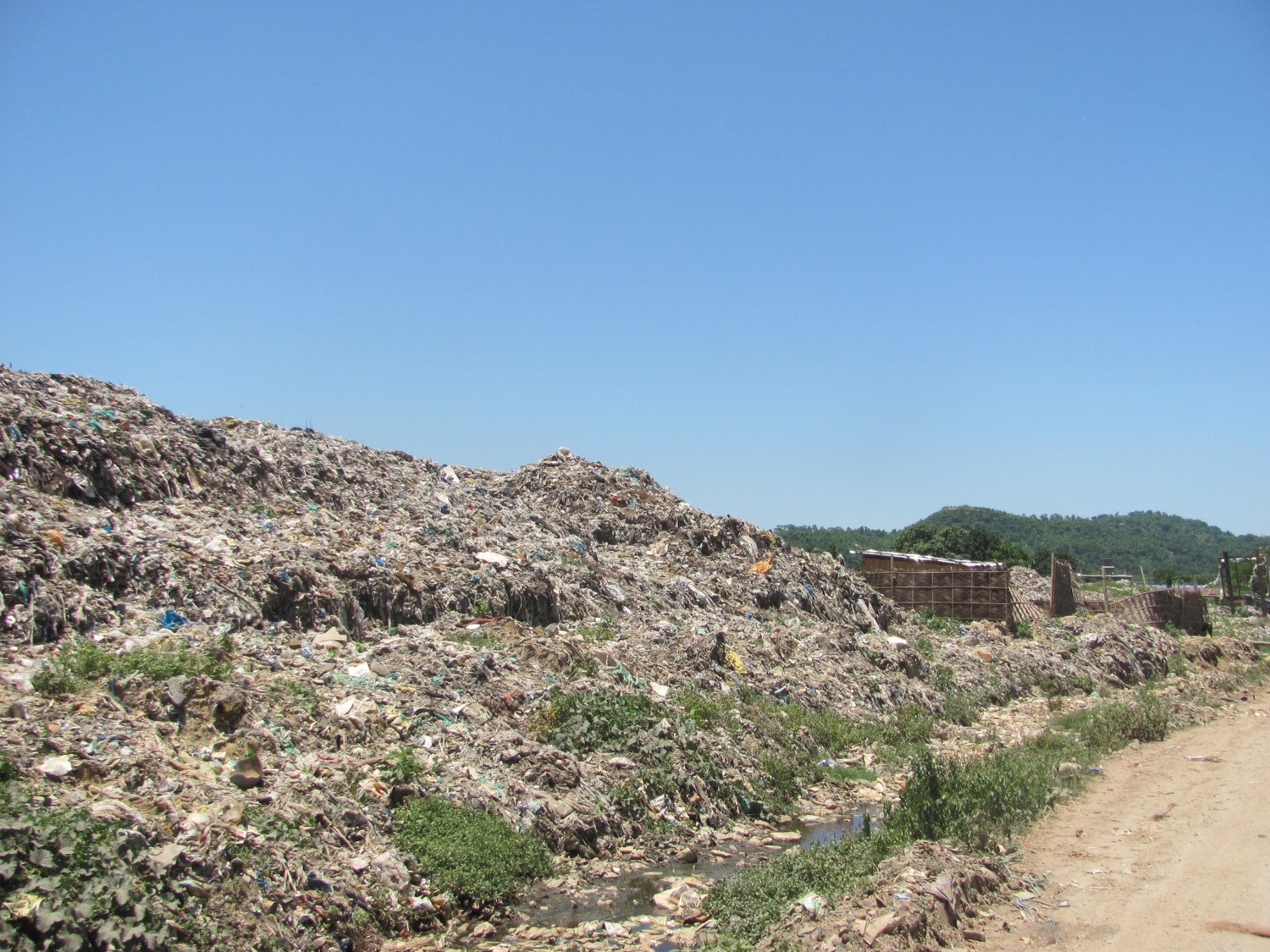 “Owing to the easy accessibility of food, it is unlikely that the bird that is foraging on garbage will stop eating garbage. But if we segregate the waste at source, the bird will not be exposed to toxic chemicals or accidentally swallow plastic with the food. Management of garbage at the source and at the dumping ground is key,” says Narayan Sharma, an assistant professor in the department of environmental biology and wildlife sciences, Cotton College State University, Guwahati.

That we are not treating our garbage well is known. And when it comes to the disposal of large quantities of solid waste, wetlands have been looked at as wastelands. A similar case is in Tamil Nadu’s Pallikaranai, where trash is freely dumped into the Pallikaranai wetland on the outskirts of Chennai despite a court having intervened to stop it.

But the impact of garbage and toxins on species is still to be understood. Traditionally, Greater Adjutants used to fly in the sky, alongside vultures, looking for food. As the vulture population crashed, ecologists have wondered what the fate of the storks would be. In Guwahati’s huge mountains of garbage, the storks discovered feeding grounds – but it is certainly an uneasy truce. Among bird species, scavengers are especially at risk of poisoning because a single infected carcass can affect many birds. Scavenging birds tend to feed en masse.

For example, gyps vultures are on the brink of extinction in India because a human painkiller drug, diclofenac, causes them to die. Because scavenging vultures feed together, a single toxic carcass can kill up to 200 birds. Recently, Assam witnessed the death of several vultures as they ate carcasses meant to poison stray dogs. In 2015, 54 vultures were killed in one day in Sibsagar and 55 more later in the year.

Scavenging in toxic environments is a harsh reality for birds. Nonetheless, storks eating trash may not be a preferred choice. In Assam, storks are also found in Nagaon (where they do not eat garbage). In Bihar, Greater Adjutant storks have never been seen eating garbage. There are breeding populations of the species in Kadwa Kosi diara in the Ganges and in Khagaria. “This could possibly be because the garbage dumps here are smaller and the areas where the storks breed don’t have significant non-vegetarian demographics,” says wildlife conservationist Arvind Mishra. “Of course there is also the fact that there are natural wetlands for the storks to feed in. They eat snakes and rats in paddy fields, and fish from waterbodies.”

Authorities in Guwahati have assured the NGT that the stork death matter is being looked at and a criminal investigation – to see if the poisoning was deliberate – is also underway. But whether anyone is nabbed or not, one thing is abundantly clear: we are up to our noses in filth and action has to be immediate. It is our collective failure if garbage, our dirtiest possessions, goes into sanctuaries, our cleanest places.