Was the intention to open North Sentinel for tourism or to shield the island from intrusive visitors? 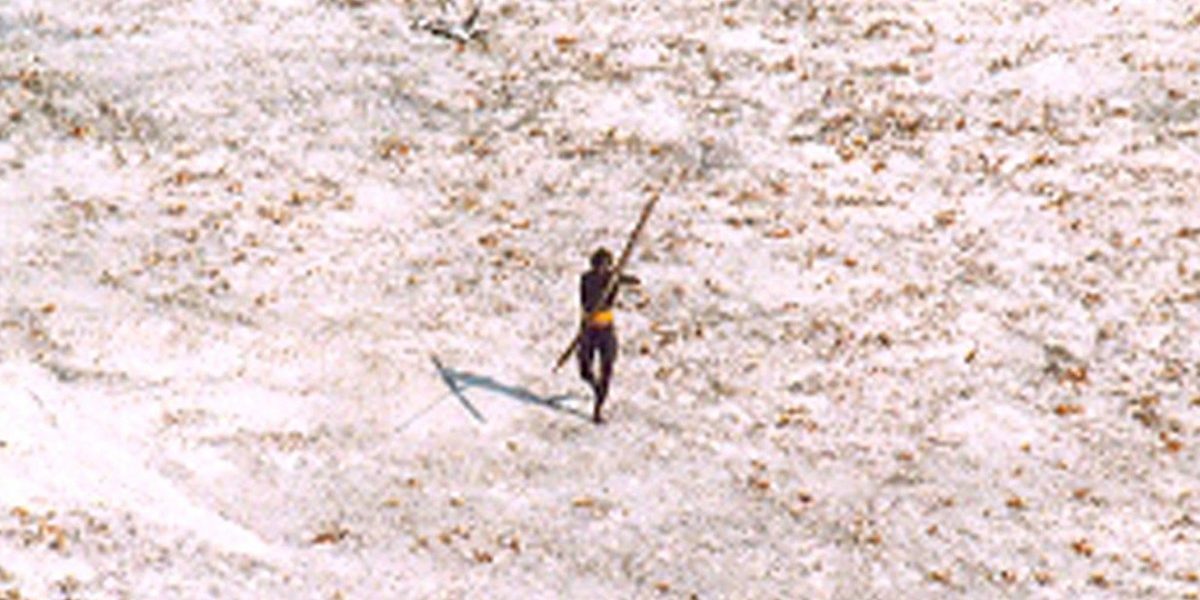 A Sentinel tribal man aims with his bow and arrow at an Indian Coast Guard helicopter as it flies over the island for a survey of the damage caused by the tsunami in India's Andaman and Nicobar archipelago, December 28, 2004. Credit: Reuters

North Sentinel island lies about 55 km west of Port Blair. It is a largely forested land inhibited by a native tribe famous for wanting to be left alone. That is why members of the tribe recently killed John Allen Chau, an American who wanted to get on North Sentinel and meet them.

The island’s ecosystem aids the tribe’s isolation. It is about 60 sq. km in area, too small to interest settler colonies and with no natural harbour to allow anchorage. Submerged coral reefs surround the island, keeping away large ships while playing host to shallow lagoons that ‘trap’ fish. They allow the Sentinelese to feed themselves without venturing far out into sea.

Although the Sentinelese are designated members of an ‘uncontacted tribe’,  they have been contacted. In the last 200 years alone, British colonial administrators and anthropologists from India, along with the other tribal groups in the archipelago, have visited the Sentinelese. They haven’t been welcome. Instances of kidnapping also likely led to heightened feelings of mistrust.

Now, there are also concerns that Chau could have exposed them to diseases that they lack the genetic immunity for – even afflictions as simple as the common cold.

“Chau had visited the islands a couple of times before this incident” Zubair Ahmed, a journalist in the Andaman and Nicobar Islands, told The Wire. “This time, he went to North Sentinel twice.”

On his first visit, the Sentinelese had shot arrows at him and forced him to abandon his quest. The second time, he was more determined, at least according to his journal. “This is when the tribes shot directly at him and he was killed,” Ahmed said.

He blames lax security for the incident. Per ‘Eyes On, Hands Off’, he said, the island has to be regularly patrolled. If this had actually been done, “Chau’s visits to the island would not have occured” in the first place.“Many fishermen go to tribal reserves, including those inhabited by the Sentinelese, because the buffer zones in such areas have abundant marine life and provide lucrative opportunities like lobster fishing,” Ahmed added.

Sophie Grig, a senior research and advocacy officer at Survival International, a global organisation, believes it’s “essential” that we respect the tribe’s desire to not be contacted. And like Ahmed, she believes the Sentinelese should be extended better protection.

“In the case of North Sentinel, this includes policing the waters to keep away fishermen, poachers or anyone else who wishes to land on the island,” she said.

As if in acknowledgment, the Government of India recognises the island as a sovereign area where the Sentinelese are mostly left alone. It is monitored remotely. Access to the island and its buffer zone is restricted by the Protection of Aboriginal Tribe (Regulations) 1956 and the Indian Forest Act 1927.

However, these rules are due to be changed to boost the archipelago’s prospects for tourism.

From August 2018, the Centre no longer required foreigners to obtain a restricted area permit (RAP) before visiting any of the 29 islands in the archipelago till December 31, 2022. North Sentinel is one of them.

A home ministry official said the decision was taken “in the interest of promoting tourism and overall development of the Union Territory”.

The NITI Aayog has also laid out plans for ‘holistic development’ of the islands. They include high-end tourism projects and installing the requisite infrastructure.

“All islands for which RAP requirements have been removed are inhabited … many by native communities like the Nicobarese and the Sentinelese,” Pankaj Sekhsaria, a member of Kalpavriksh, an NGO working on environmental and social issues, told The Wire. “We can only assume that the list was drawn up on the assumption that inhabited islands already have some infrastructure in place to support tourism.”

He thinks the government’s move suggests it “ignored” ground realities. Interview, one of the 29 islands, also “hosts feral elephants”.

It’s not clear why the RAP was done away with, more so because the 29 islands are not freely accessible. Foreigners still have to obtain clearances from the tribal affairs and environment ministries to visit certain protected areas like them.

Was the intention to open North Sentinel for tourism or to shield the island from intrusive visitors?

Nonetheless, because the government seems to be weakening certain protections, more incursions are only to be expected.

“An English newspaper recently carried a story with the headline ‘Dangerous tribe islands to open to tourists’ referencing North Sentinel,” according to Grig. “We know this isn’t true because other regulations are in place to restrict access to such islands. But the removal of RAP is problematic because the message behind the move is confusing.”

The RAP’s removal may not have directly encouraged Chau’s visit to the island, as the local administration claimed. There is also the question of why these islands out of the 550+ in the archipelago.

“All the happenings in the last few months indicate that those promoting tourism in the islands are not aware of their ecological, geological and sociocultural aspects,” Sekhsaria said. “This is causing their increasing vulnerability.”

It remains to be seen if the RAP’s elimination was connected to the tourism plan and, more importantly, whom the plans will benefit.