'Teething Troubles' at Kudankulam: India Biting More Nuclear Than it Can Chew

The experience with the Kudankulam 1 and 2 reactors suggests that the project is likely to be significantly delayed with higher costs than projected. 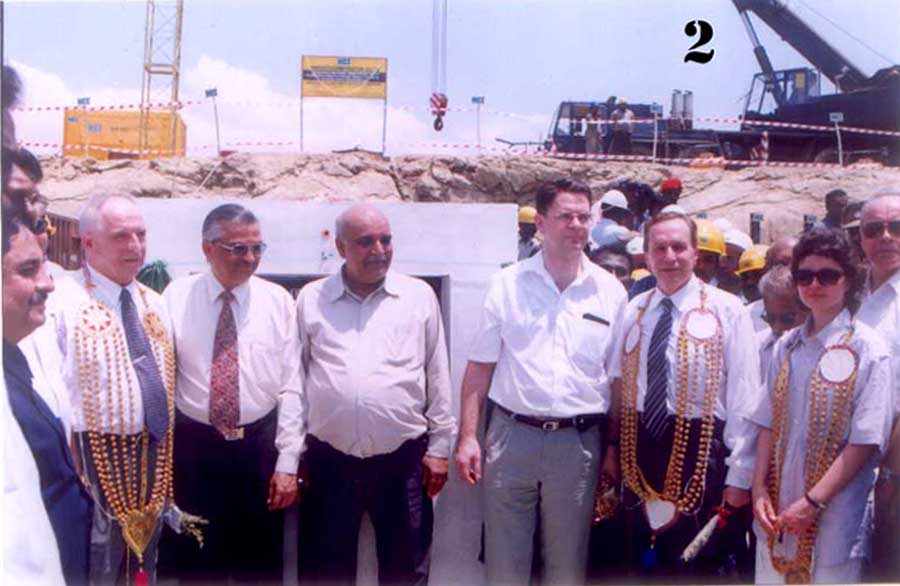 At the commencement of construction of the Koodankulam 1 and 2 reactors on March 31, 2002. Credit: PIB

On February 17 this year, the Nuclear Power Corporation of India Limited (NPCIL) began the excavation process to set up the Kudankulam 3 and 4 reactors. The reactors are to be imported from the Russian state nuclear corporation Rosatom; according to Rosatom, the equipment is to be manufactured and delivered in 2016-2018. The Department of Atomic Energy (DAE) projects commissioning of the two units for the 2020-21 fiscal year. As stated in the Lok Sabha in December 2014, the approved cost of the project is Rs.39,747 crore.

There are, however, good reasons to be skeptical of both the cost and time projections. As described below, the experience with the Kudankulam 1 and 2 reactors suggests that the project is likely to be significantly delayed with higher costs than projected. Further, if and when the reactors do start operating, it is quite possible that they will not generate as much electricity as expected.

Nearly 14 years ago, on March 31, 2002, a similar excavation process commenced at the same site, that of the Kudankulam 1 and 2 reactors. At that time, the DAE’s in-house magazine Nuclear India enthusiastically described the actions taken by NPCIL to “save on the mobilisation time required by the contractors and start the construction work soon after the grant of construction clearance by the Regulatory Board”. The reactors were scheduled to start functioning in 2007 and 2008 respectively. In 2004, the project director announced that NPCIL was “setting standards…[and] achieving excellence, too, at a low cost” and confidently projected that the first reactor would start generating electricity from March 2007, ahead of schedule.

Not only did the reactor not start operating ahead of schedule, but in fact, the saga since then has involved delays after delays. The pattern that became apparent was that there would be announcements about imminent commencement of operations, which wouldn’t be met, only to be followed by another announcement of imminent commencement of operations, sooner or later. In September 2010, for example, NPCIL Director S.K. Jain announced that “electricity from the first unit will start flowing in the first quarter of 2011” and the second would be ready by September or October of 2011. Neither prediction came true, and in July 2011, NPCIL announced that the “reactor may attain criticality within another five months provided the Atomic Energy Regulatory Board (AERB) is satisfied with the functioning of the hi-tech equipment of this reactor and gives its clearance on time”.

More important than the missed 2011 deadlines is the fact that the earlier September-2010 announcement had no basis. In June 2011, well after when electricity from the first unit was to have flowed, the Ministry of Statistics and Programme Implementation (MOSPI) reported that the plant had only achieved 81.20% of the physical progress required for project commencement. Even to reach that point, the project had exceeded the original budget of Rs.13,171 crores by several hundred crores.

After numerous such postponements, finally, on July 13, 2013, Kudankulam-1 became critical and the NPCIL director promised that the second unit would attain criticality within eight months. Not surprisingly, that did not happen and Kudankulam-2 still remains in the soon-to-start category. In October 2015, for example, the station director promised that the second unit would start generating power by February 2016. But as of March 2016, the expectation was that the second unit “is likely to commence power generation in May” of this year. In the meantime, expenditure on the two units has ballooned – going up to Rs. 20,962 crore as of November 2015 according to MOSPI; the total anticipated cost is now Rs.22,462 crores.

The saga of failures at Kudankulam-1, however, does not stop with it reaching criticality in July 2013. First: the reactor took over 17 months to go from criticality to being declared commercial on December 31, 2014. In contrast, the Rajasthan 5 and 6 reactors took less than three months each for the same transition. Choosing the last day of 2014 would suggest that the declaration had more to do with public relations goals rather than the reactor having reached some stable level of performance. Just two months earlier, news reports cited unnamed sources saying that there was a major problem with the turbines in the plant. In the event, the performance of the reactor after having been declared commercial has been extremely poor – to say the least.

According to the PRIS database maintained by the International Atomic Energy Agency, in 2014, Kudankulam-1 only operated for 4,212 hours, less than half the time it could have during a year. A good fraction of those operations evidently involved the reactor generating less than its rated power capacity. In all, the reactor generated less than a third of the electricity that it could have if it had operated at full power, 24 hours a day, 365 days a year. The subsequent year has been even less impressive: the NPCIL website itself reports that between April 2015 and January 2016, the plant had a load factor of 20%; i.e., it generated only 20% of the electricity it could have generated at full power. The analyst V.T. Padmanabhan has carefully documented the extremely poor performance of the reactor by using data from the Southern Regional Load Dispatch Centre (SRLDC) meticulously.

The DAE describes this dismal performance as “teething problems”, implying that they expect the reactor to grow out of these problems. But unlike children who almost always develop sound teeth sooner or later, there have been several reactors that have never performed well. Consider the RAPS-1 reactor that, like Kudankulam-1, was the first reactor of its type (a heavy water reactor) to be constructed in India. That reactor was declared commercial on December 16, 1973 (again, a year-end date). Between 1974 and 2013, when the reactor was declared shut down, the reactor had a load factor of 18.7%. Only in four of those forty years did the reactor even produce 50% of the electricity it was supposed to generate, whereas in 21 of those years, it produced under 10%.

Coming back to Kudankulam-1 – the question is: why is the reactor performing so badly? Broadly speaking, there are two explanations. One possibility is that because NPCIL, rather than Rosatom, carried out the actual construction (what is called ‘reactor erection’ in trade jargon), the problems with the reactor originated in NPCIL’s lack of experience with the VVER-type reactor being built at Kudankulam. The second possibility is that the reactor components or parts supplied by Rosatom were not of good quality. Of particular concern is equipment supplied by a company called Zio Podolsk, a subsidiary of Rosatom, which seems to have supplied “Steam Generators, Cation and anion filters, Mechanical Filter, Moisture Separator and Reheater, Boric solution storage tanks, Regenerative blow down heat exchanger, Pipelines and fittings of different systems, Insulation materials, [and] PHRS Heat exchanger” [sic], according to an April 29, 2013, letter from NPCIL.

Failures on the Russian side

In 2012, the procurement director of Zio Podolsk was arrested on corruption charges. (To be fair, Rosatom is not the only corrupt nuclear company; Richard Tanter of the University of Melbourne and Nautilus Institute points out that “gross corruption is evident in nuclear technology exporting countries such as Russia, China, and the United States, and in a number of nuclear technology importing countries”.) Given the limited information available to people on the outside, it is essentially impossible to assert which components, from Zio Podolsk or some other source, are at the root of these multiple failures, which continues.

These failures have at least two major implications. First: they constitute a safety hazard and, given the nature of nuclear technology and its inherent capacity for accidents, any small failure might provide the trigger for larger failures and severe accidents. These failures suggest that the locals near Kudankulam who were protesting against the plant because of their concerns about accidents were right to be worried, and correct in not accepting the word of establishment experts about the safety of the plant. The November 2011 presentation by the expert group constituted by the Government of India to study the safety of Kudankulam, for example, talked about load factors for modern VVER-1000s around the world being as high as 83-88%; compare that to the much lower figures achieved by Kudankulam-1 so far. This leads to the second implication: for each year with lower than expected load factors, the cost of generating electricity from Kudankulam-1 (and presumably Kudankulam-2, when it starts operating) will be higher than expected.

Other reactors constructed by Russia have experienced major problems, too – for example, the Bushehr plant in Iran. Iran and Russia signed the agreement for Rosatom to complete the plant in January 1995, but it was not until May 2011 that the reactor became critical, and it was September 2013 by the time the reactor was declared as operating commercially. There were a whole host of problems, including many failures on the Russian side. And its performance after being declared commercial has been mediocre at best.

Even with more recent agreements, questions have been raised about Russia’s ability to deliver on its commitments to construct reactors rapidly. Steve Thomas of the University of Greenwich has argued that the collapse of the rouble on the currency markets has created problems for Rosatom’s ability to supply reactors. Another report, by Vladimir Slivyak of Ecodefense, a Russian NGO, argues that “taking into account its limited reactor manufacturing capacity and the current domestic development plans in Russia, it is unlikely that Rosatom will be able to build new reactors in other countries as scheduled. Cost overruns and significant delays must be expected.” There have been such overruns in reactors that Rosatom is building within Russia itself. It is even more likely that overseas projects will also experience such delays and escalations.

Due to these multiple factors, it is very likely that the Kudankulam 3 and 4 reactors will be delayed and cost more than what was initially earmarked for the project. The playwright George Bernard Shaw is supposed to have remarked, “We learn from experience that men never learn anything from experience.” This witticism is clearly borne out in the DAE’s ambitious plans for rapid construction of Kudankulam-3 and 4. For the DAE, of course, such confident projections are the stuff of their sustenance and political power. The question is whether policy makers and the general public will fall prey to these illusory goals.

M.V. Ramana is at the Program on Science and Global Security at Princeton University, and author of The Power of Promise: Examining Nuclear Energy in India.