The power yield from the planned ten-fold increase in solar energy on an average will be as little as 20% of the total capacity, making little difference to India’s emissions. 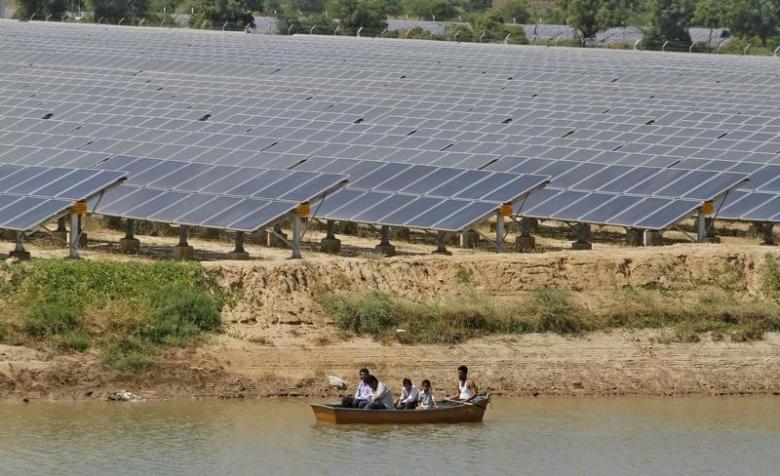 Security personnel sit in a boat as they patrol the premises of a newly inaugurated solar farm at Gunthawada village in Banaskantha district in Gujarat October 14, 2011. Credit: Amit Dave/Reuters/Files

The future of renewable energy in India presumably rests on achieving the ambitious solar power target set by the country. In its Intended Nationally Determined Contributions (INDC) under the Paris Agreement, India committed to increase the amount of electric power from clean energy resources to 40% by 2030. A total of 175 GW of renewable energy installed capacity was promised to be achieved by 2022, of which 100 GW is the target set for solar power alone.

A 2014 performance analysis study by the Malpani group, a pioneer in the industry of power generation, calculated that for every megawatt of solar power capacity installed, an average output of a mere 19% is extracted.

For obvious reasons – night, monsoons, dust, storms – solar power is neither produced all day nor throughout the year. Thus, the total maximum capacity of a solar power plant is never met to its fullest.

According to data released by the Ministry of New and Renewable Energy (MNRE) in May 2013, India’s CUF of solar photovoltaic is anywhere between 11-31%. In the draft national electricity plan released by the central electricity authority in December 2016, the CUF of a solar power plants is stated to be around 20%.

The major problem with such a low CUF is highlighted when one realises that all data released by the government gives targets on the basis of installed capacity. These targets look ambitious at first glance. However, any real shift to renewable energy as expected by the citizens is unlikely.

As per data released by the MNRE, cumulative capacity of solar is 6.7 GW for the year ended March 31, 2016. This will, in effect, generate power worth only a fifth of such a capacity as opposed to if it were to be installed in other modes of generation. The measurement of solar power in terms of GW of installed capacity is, therefore, fictitious. These should be rightfully measured by their effective producible output, and that would reveal India’s capacity to be a very low figure.

A majority of the target, that of 60 GW, is to be fulfilled by the scheme for developing solar parks and ultra mega solar power projects launched by the MNRE. The government under the said scheme approved a total of 34 solar parks with a total capacity of 20 GW in 21 different states.

India’s cumulative solar capacity has grown to almost 8 GW of ground-mounted grid connected power as on October 31, 2016, and this is rapidly rising. Sixteen major states have set personal targets for capacity addition under separate state solar policies. The capacity addition from these state targets adds up to 50 GW of power. Recalculating this figure in terms of CUF, the deliverable power is close to 10 GW.

The growth of rooftop solar in India is relatively low. As on the same date, October 31, 2016, rooftop solar contributes to an approximate total of 1GW of generated solar power. For this to increase to 40 GW in the next five years is a highly ambitious task for the government. Despite the government schemes providing up to 30% subsidy (70% in case of special category states) for rooftop solar and attractive feed-in tariffs offered by state regulators, the lofty cost of rooftop solar panels overrides the tangible benefit in the eyes of customers. Due to the instability in solar power production, the dependence of households with rooftop solar on coal based electricity/diesel generators will persist.

What this means for coal

When faced with the deceiving picture of the output from a major component of renewable energy and taking into account the promises made by the government of 24×7 electricity for all, the idea that India’s dependence on coal based power will decrease in the near future seems naïve. The government has not reduced its coal output targets and plans to raise coal output from the current 550 million tonnes to nearly a billion tonnes by 2022.

What will this do for emissions?

India has not committed any absolute or concrete targets for reduction in its greenhouse gas emissions. The INDCs are in the form of percentages of fossil fuels in its GDP and in its total power basket. As the GDP will grow, India will reserve the leeway to keep spewing more greenhouse gases into the atmosphere. The absolute amount of greenhouse gas emissions will actually increase substantially. This is obviously not unknown to the country’s master planners, as the national electricity plan shows India’s emissions will actually rise from 806 million tonnes today to 983 million tonnes by 2022.

Achieving India’s solar energy commitments in terms of the target of 100 GW will be an astonishing task. The contribution from the rooftop solar programs envisioned is extraordinarily unlikely to fulfilled. To the average citizen, the much advertised ten-fold increase in solar power may seem like a game-changer for the renewable energy sector; however, on close examination it becomes clear that the power yield from this increased capacity on an average will be as little as 20% of the total capacity, and this will make little difference to India’s emissions. The ambitious targets publicised by the government prevaricate this position.

Armin Rosencranz is a professor of law at Jindal Global University, Sonipat, where Kamakshi Puri is a law student.