According to Kul Man Ghising, managing director of the Nepal Electricity Authority, purchasing power from Nepal would be cheaper for India and would align with it's sustainability ambitions. Nepal, until 2017, was power-starved, facing outages of up to 18 hours a day. The country now has surplus energy, but it does not have a concrete plan to export power. As a result, between 200 MW and 600 MW of electricity is being wasted daily, during different times.

An estimated 800 MW of electricity or more could be wasted during the Dashain festival, beginning October 12 as all government offices, schools and factories close to celebrate the week-long festival.

The immediate export possibility is with India and the Nepal Electricity Authority (NEA) had written to India’s ministry of power for electricity export approval about a month and a half ago. There has been no response yet.

“The authority has sent a request to India’s power ministry for exporting electricity from Nepal, detailing how much energy from which hydropower projects we can export,” said Suresh Bahadur Bhattarai, spokesperson for the NEA. “We are yet to receive a reply.”

The power utility has proposed that electricity generated by various hydropower projects, including those in Upper Tamakoshi, Upper Bhotekoshi, Marshyangdi, Trishuli, and Devighat whose combined generation capacity stands at 621.1MW, will be exported after approval from India.

“We are waiting for the Indian government’s approval for selling power as we have been forced to shut down production from certain power projects because the produced electricity would go to waste,” said Bhattarai.

Nepal became an energy surplus country ever since the 456MW Upper Tamakoshi Hydropower Project came into full operation in August this year.

According to the authority, Nepal now has surplus power even during peak hours, usually between 7 pm and 8 pm. The peak hour demand stands at 1,500MW. The country is currently producing 2,000MW of electricity a day and of that, 1,900MW is generated from hydropower projects. 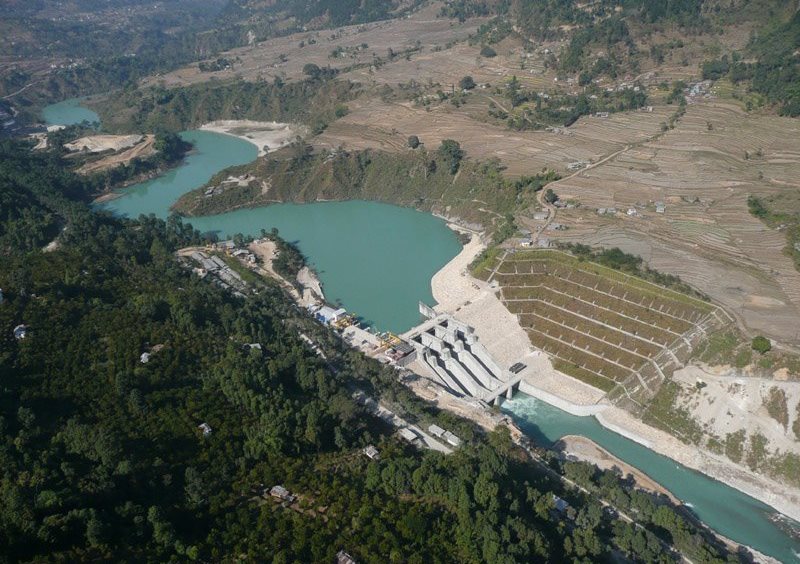 Kul Man Ghising, managing director of the authority, said only 900 MW-1,100 MW is consumed at night when there is low demand for power. In the day, 1,200MW-1,300MW is consumed when daytime demand is the least.

With no avenue for export, some power plants have been cutting down electricity generation. Experts say this is a paradox in a country like Nepal which was suffering from outages until just a few years ago.

“When the projects can generate electricity in their full capacity, failure to utilise capacity is a waste of energy,” said Ghising.

According to Ghising, the wastage of electricity in monetary terms was around Rs (Nepalese Rupee) 1.8 billion in the last month and a half, if calculated at an average selling price of Rs.9.5 per unit.

Ghising fears such wastage can continue until late November if Nepal is unable to sell electricity to India or increase domestic consumption, since power plants can be operated to their full capacity till that time, as rivers only dry up in the winter.

Nepal was the first among all of India’s neighbours to participate in the Indian Energy Exchange (IEX). The first 400kV Cross Border transmission line between Nepal and India, from Dhalkebar to Muzaffarpur, was charged at 400 kV voltage level on November 11, 2020. This paved the way for power export and import to and from India through the IEX, according to the NEA.

There are currently two separate electricity trading arrangements with India at small scales.

“We buy power only during the winter and this mechanism has proved to be good for us as it is like taking power from a reservoir project,” said Ghising.

For the reservoir type hydropower projects, the authority has approved the maximum rate of Rs 12.40 per unit.

According to Ghising, Nepal is currently selling 150 MW – 200 MW of electricity whenever the Indian side makes the request.

Nepal has also been buying electricity from India under short-term power purchase agreements through Dhalkebar and Tanakpur regions. But officials said this mechanism is not enough for large-scale power trading with India.

“So grid and market synchronisation with India is the only way for large-scale trading of electricity,” said Ghising.

But India’s delay in clearing Nepal to participate in bids to sell its electricity has worried authority officials.

Also read: India Has Few Friends Among Nepal’s Rulers and Even Fewer Among the Youth. But That Can Change

Ghising said that purchasing electricity from Nepal would be less expensive for India as the electricity rate in the Indian Power Exchange market has reached INR 20 per unit because of increased demand for power amid the coal shortage in India.

“We can offer a price in the range of INR 5 per unit which will not only be less costly for India but will also balance power prices in India and boost the Indian economy,” said Ghising. “In fact, India purchasing Nepal’s power is a win-win situation for both countries.”

He also said that, as hydropower is clean energy, buying Nepal’s power would also contribute to India’s own ambitions to increase the share of renewable energy in energy consumption substantially.

Even though the Indian power ministry is yet to open its doors to Nepal’s electricity and allow Nepal to participate in the daily bidding process to sell electricity, Nepal’s power utility body had participated in a bid to sell 40MW of electricity to the Indian state of Punjab in May.

Bhattarai, the spokesperson for the NEA, said this was done through a separate mechanism and Nepal was allowed to participate in the bid that one time. Nepal participated in an auction called by the Punjab State Power Corporation Limited to supply electricity to Punjab for the period of July – October.

According to NEA officials, Nepal was chosen as one of the potential suppliers but the Punjab State Power Corporation Limited has not yet decided on the matter.

July – October is the peak season for selling power as all hydropower plants run in full capacity due to abundant water flow in rivers.

In winter, Nepal has to import electricity from India as power plants operate in the range of 30-40% of their capacity due to reduced water levels in rivers.

“We will have to import around 10% of [our] electricity in the winter from India this year,” said Ghising.

With more electricity being scheduled to be evacuated to national grids from various new under-construction hydropower plants, Ghising believes the country will not have to rely on imported electricity, even in the winter, from 2022-23.

There will be more surplus energy next year if Nepal cannot export energy or more factories do not come up to consume the electricity, according to Ghising.

According to him, about 300MW-400MW of electricity is expected to be added to the national grid by next year.

With the domestic market not growing to accommodate the increased power production, the authority has no option but to export electricity to avoid wastage of energy, according to officials at the power utility.

Even though the government has been asking people to use electrified kitchenware and the authority is preparing to distribute more power to factories, it won’t be enough to ensure consumption of all available energy for a few years, they say.

The situation has worried the private sector power developers as well.

“We are concerned whether the authority will buy electricity from the private sector developers and even from those who have not signed a power purchase agreement with the authority,” said Krishna Prasad Acharya, president of Independent Power Producers’ Association, Nepal.

“Even those who have not signed the agreements have invested heavily in survey, land acquisition and environment impact assessment,” said Acharya. “Their investment will be wasted if the authority fails to sign power purchase agreements on the pretext of its failure to sell electricity to India,” he said.

According to Acharya, it is a policy defect on the part of the government, as it kept on focusing on increasing electricity generation without paying heed to consumption and export.

In a white paper on energy in 2018, the government had announced its policy of producing 15,000 MW in the next 10 years, but no policy was introduced for increasing demand and consumption accordingly.

“As a result, the current situation of surplus energy arose,” said Acharya.

The private sector developers say that the government should open the door for the private sector to enter into power trading which would pave the way for more electrification in the country and consumption of electricity.

“The private sector can sell electricity in Nepal and also coordinate with Indian power purchasers to get the necessary approval from the Indian government for selling power in  Indian markets,” said Shailendra Guragain, former president of Independent Power Producers’ Association, Nepal, a group that encourages the private sector to work in the area of hydropower in the country.

Government officials say they are planning to raise the issue of delay in granting approval to Nepal to export electricity at the next meeting of the Joint Working Group on Energy Cooperation headed by the joint secretaries of Nepal and India and the Joint Steering Committee on Energy Cooperation, headed by the energy secretaries of the two countries.

“We have sent a proposal to the Indian side for holding these meetings between the Dashain and Tihar festivals,” said Madhu Bhetuwal, spokesperson for the Ministry of Energy, Water Resources and Irrigation.

Dashain begins from Thursday, October 7 and Tihar is celebrated for five days from November 3.

“The Indian side is yet to respond. If India does not permit selling electricity before the meeting, we will raise this issue in the next meeting of these bilateral mechanisms,” said Bhetuwal.

According to a senior official of an Indian company with an interest in Nepal’s hydropower sector, there could be a major breakthrough in energy trade between Nepal, India and Bangladesh by the end of this year.

“A negotiation is undergoing for a trilateral agreement,” the official told the Kathmandu Post requesting anonymity as he was not allowed to speak to the media.

In late 2019, GMR Energy and Bangladesh had entered into an agreement for 500 MW of electricity produced by the 900 MW Upper Karnali Hydropower Project, which is yet to start, to be sold to Bangladesh.

“[The] Nepal government has also asked GMR whether it could sell the 108 MW of electricity Nepal will receive for free from the project to Bangladesh,” said an official familiar with the development.

This article was first published on the Kathmandu Post.