In addition to "launching" a scheme that basically already existed, the prime minister's claim that his government has a good record on rural electrification contradicts the data. 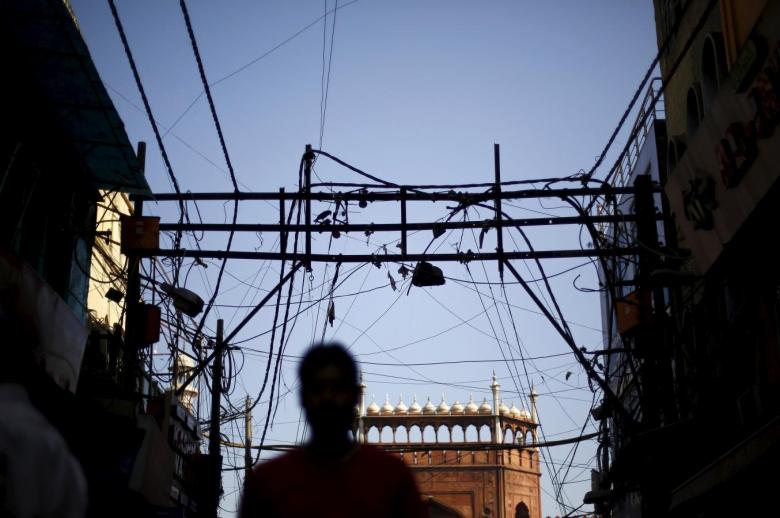 A man is silhouetted against the backdrop of Jama Masjid (Grand Mosque) as overhead power cables are seen in the old quarters of Delhi, September 10, 2015. Credit: ReutersAdnan Abidi/Files

Prime Minister Narendra Modi this week announced a reportedly brand new scheme to electrify all villages in India and to provide electricity to all by the end of 2018. The scheme was called the Pradhan Mantri Sahaj Bijli Har Ghar Yojana or ‘Saubhagya’ intiative. The government press release which came out after the the function says that it will provide power connections to an estimated four crore households which currently do not have a power connection. These connections would be provided free of cost to the poor, the prime minister said.

We care about those families who do not have access to electricity. #Saubhagya pic.twitter.com/kKgwBQbucB

The aspirations of the poor determine the working of our Government. #Saubhagya pic.twitter.com/9Mdt5rVe22

The aim of the scheme is to connect all the villages in India with electricity and provide free electricity connections to poor families. Quoting different newspapers, this Firstpost article give us a comprehensive view of the different aspects of the scheme: “…(it) is expected to electrify all willing households, as substitution to kerosene while bringing about an improvement in education, health services, communication and public safety. The government claimed it will create more jobs and provide a better quality of life”.

This narrative is exactly the same as the government communication posters above.

Let us look into the scheme in detail and try to find out what is “new”.

At the time of independence, India had around 1,500 villages electrified. By 1991, the number reached 4,81,124. But in the next decade, due to de-electrification, the number came down to 4,74,982 villages. Faulty maintenance by cash-strapped state electricity boards were said to be the main reason for the de-electrification.

In April 2005, the then UPA government led by Manmohan Singh launched a new programme with an objective to “provide access to electricity to all rural households through creation of rural electricity infrastructure comprising of Rural Electricity Distribution Backbone, Village Electricity Infrastructure and Decentralised Distribution Generation & Supply System.” The scheme was named after former Prime Minister Rajiv Gandhi and was formally known as Rajiv Gandhi Grameen Vidyutikaran Yojana (RGGVY). Under this plan, all the families below poverty line (BPL families) were eligible to get a free electricity connection. There was a capital subsidy involved for the programme and 90% of the subsidy was borne by the central government. From the second half of the tenth five-year plan to the end of the 11th five-year plan, Rs 33,000 crore was allocated. The programme could not cover the entire projected geographical area and hence could not complete the entire spectrum of household electrification. So the government decided to continue the scheme till the end of the 12th five-year plan. The fund allocation was Rs 39,275 crore.

In May 2014, the government changed at the Centre. The BJP-led NDA took over from the UPA and Narendra Modi became the prime minister. In November 2014, the prime minister launched the Deen Dayal Upadhyay Grameen Jyoti Yojana as a new scheme. Technically, this new scheme had one additional component – separate feeders for agricultural and non-agricultural consumers to roster the supply and meter them separately for easy monitoring. Instead of adding this component into the RGGVY, the DDUGJY subsumed RGGVY along with the leftover budgetary allocation of Rs 35,447 crore. This government document on rural electrification gives us the information of the project till October 2016.

In this scenario, Modi’s latest scheme with largely the same objectives needs scrutiny. In comparison to the RGGVY, the Centre’s DDUGJY was a marginally updated programme. Here, the Saubhagya scheme offers very few tweaks on top of the previous two initiatives.

In his speech, Modi gave his government a pat on the back when it came to implementation of electrification programmes. It is important to examine this. Let’s start with some interesting comments made by a senior minister in this government regarding the numbers and the success of the DDUGJY. Then power minister Piyush Goyal made these three interesting statements on three different occasions in two years and Modi has a different version all together. See the screenshots below. Which one is to be believed in this? Probably none of them. A closer look at the actual numbers shows that the current government’s implementation rate is not quite what it claims.

After this government came to power, accessing data to compare or analyse the progress of government-sponsored schemes has become difficult. For example, to retrieve the historical data on rural electrification from 2005, normally one would check the archived files on the programme’s website or the Ministry of Power, or the Ministry of Rural Development. This used to be the RGGVY website. Now the site does not exist. The Ministry of Power’s website doesn’t have any data other than lot of dashboards and the website which contains open government data throws up scattered minimal information, mostly relating to release of funds and technical studies. The Ministry of Rural Development shows this.

Luckily, we have two documents which give us year-wise numbers. This progress review from the planning commission and the annual report of the Rural Electrification Corporation Ltd (REC), which is the nodal agency executing the scheme. For more independent and updated numbers, let us take the figures from REC annual report which is updated up to March 2017.

The number of un-electrified villages electrified from 2007-08 to 2016-17 is mentioned in the chart below.

What this shows is that in comparison with first three years of UPA-II, the electrification of villages is happening at a much slower pace.

Let us look at the number of BPL households which got free electricity connection in the same time period.

Here, the numbers are even weaker. On a year-to-year comparison, the difference between the first years of UPA-II and the current government is massive. The previous administration gave free electricity connections to 39,59,091 more BPL households than the Modi government did in its first year. That is 521.36% higher. In the second year, the difference is more stark – 44,44,211 more BPL households.

Another interesting thing is the government itself is not sure of the numbers of un-electrified houses. Either they are confused or it is a conscious effort to mislead. The Hindu has reported that BPL household numbers will be based on socio-economic Census data from 2011.  Modi says 20% of total households in India do not have an electricity connection. But NITI Aayog data says out of the 17,94,09,912 total house holds in India, 13,38,38,603 (74.6%) households are electrified as on April 30, 2017. That means the prime minister is wrong – 25.4% (4,55,71,309) un-electrified households remain.

Let us check one more set of data from the government’s GARV dashboard. Here, the picture is different again: 13,62,58,395 crore households have been electrified till December 31, 2016. That is 24,19,792 households higher than the NITI Aayog’s data. There is also another problem here. NITI Aayog data, which shows lower numbers, is dated April 2017, whereas the power ministry’s dashboard data is dated December 2016. The difference is 1,77,119 households higher than the whole of 2016-17’s BPL household electrification numbers.

It doesn’t end there either. The GARV dashboard shows, 24,99,168 rural households have been electrified from January 1, 2017 to September 26, 2017. That is 2,77, 685 households covered per month. At this pace it will take five years and nine months to electrify all the remaining un-electrified houses (if the number of remaining households is 1,69,33,000, as DDUGJY data reveals).

Therefore, this newly-launched scheme is neither new nor it is a gift to the poor. This scheme, with largely the same objectives, has been progressing since 2005-06 and the Modi government is merely the latest caretaker.